Jason Shawhan programs the Graveyard and Spectrum sections at the Nashville Film Festival, occasionally hosts the Midnight Movie series at the Belcourt, and writes about film at the Nashville Scene. I profiled him in the June print edition of Nashville Arts. Here is the full interview:

You’re one of the most passionate film lovers I know. When you introduce a film, your love for the work spills out and infects the audience. Is there a particular moment (or moments) from your youth that solidified your path as a filmmaker and film curator?

I like to say that I didn’t really have any taste in film until 1992, when the one-two punch of Alien 3 and Twin Peaks: Fire Walk With Me kickstarted some weird synapse deep inside my brain. But even before then, in elementary school on the playground, you’d have kids recounting the narratives of films that other kids couldn’t necessarily see, and I learned that the ability to sell a movie is equal parts storyteller and shameless huckster.

When programming films for the  Nashville Film Festival, what do you look for?

When I program films, or when I’m asked to collaborate or contribute on choosing films, I look for something interesting that isn’t necessarily getting lots of attention, or digital buzz. I like things that take risks but aren’t ignorant or cavalier about it. I look for things that keep people in touch with remote mental processes and deeply visceral emotions … things that fill the hippocampus full of images and concepts that still tumble around in sleep and distant corners of waking life. But I also enjoy deconstructing the past and digging deep into the established cinema subconscious.

How did you get started programming and writing about films?

I did the occasional film review back in Junior High and High School (first published film review: Bagdad Cafe, in University School’s The Other Paper c. 1988), continuing to do so off and on in college. I ended up becoming a professional critic through a chain of events from 1998-9 that were complicated (three outlets, a film school internship, and the Internet bust were all involved) and ultimately freeing. As for programming, my first step was the Nashville Cinema Underground, which I founded in 2001 so that if screenings got busted by the police, I would end up being the one to go to jail instead of venues getting tied up in legal drama.

Oooh, tell us more about that.

The Nashville Cinema Underground was a lot of fun. Out first offering was Virginie Despentes and Coralie Trinh Thi’s film Baise-Moi, and we served as a buffer zone in the long long ago. We brought Takashi Miike’s Dead or Alive: Hanzaïsha and the uncut version of Alexandre Aja’s Haute Tension to the Nashville Film Festival (the latter a year and a half before it’s edited, half-dubbed national release). At the Belcourt we had a bunch of films, some because of extreme content and others just because of challenging structure. I liked being the advocate/host for strange and demanding work, and that’s something that hasn’t changed, even now. I let the NCU dissolve once it was no longer needed; The Belcourt, starting with Shortbus, had things under control, and that buffer was no longer needed. I thankfully never got arrested, for which I think all involved parties are grateful. 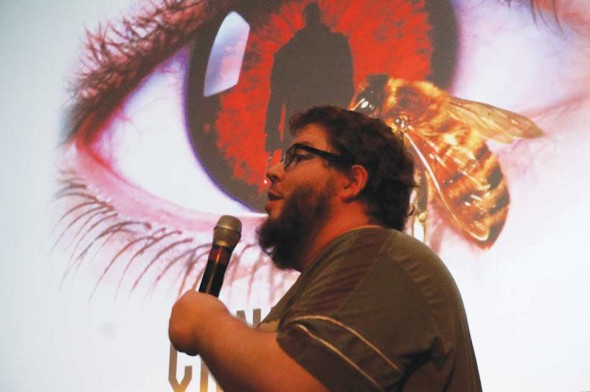 Jason Shawhan at the Candyman screening

Do you have any memorable stories on meeting directors, actors, writers, etc at the Belcourt and elsewhere?

I try to give guest directors, performers, and artists their space, but I am very chatty and prone to try and preserve meaningful moments when I can. I’ve got great photos of me with John Waters, Michael K. Williams, Gaspar Noe, P.J. Soles, Bruce LaBruce, and Susan Ottaviano, and very meaningful inscriptions from Marianne Faithfull, Dez Dickerson, James Adomian, Karen Finley, and Jennifer Jason Leigh. But I’ve had amazing discussions with people (very often about Tuesday Weld or Grace Jones) of all sorts at every place I’ve ever seen movies, truthfully.

Have you ever had moments where you felt at odds with the audience? That is, you program a film that you have great enthusiasm for, that you expect the audience to connect with in the same way, and they just don’t get it?

It’s an awful feeling. You feel like you get where a crowd is coming from, that there’s a dialogue of attendance happening. And then something you care deeply for (True Stories, You and The Night, Election) just saddles up the floor and rides it off into the sunset. And it’s not like in a personal relationship, where you can have a confrontation of some sort and try and find understanding or closure. My goal in the past couple of months has to try and become more scientific about those kind of situations, accepting that attendance is a graph: it has peaks and valleys, but it’s never in isolation, and it’s just part of a perspective that eludes me sometimes… Most of the time… Often. You just have to adapt.

What are some of your recent film discoveries that you hope come to Nashville in the near future? Also, do you have any upcoming projects you want to talk about?

I’m really psyched for Bertrand Bonello’s Saint Laurent, which is just exquisite, a hallucinatory biography of fashion, decadence, and identity. I saw it at last year’s New York Film Festival, and it made a hell of an impression on me, and it ideally will surface somewhere between June and August.

The thing I’m most psyched for is that Jacques Rivette’s twelve-hour magnum opus Out 1: Noli Me Tangere is finally going to be getting an official U.S. theatrical release in December. Previously you could only see it in this country in the single extant 16mm print, with two volunteers triggering projected English subtitles with a laptop. It was wild, but I’m ecstatic to be able to see it without having to worry about sync errors. It’s a conspiracy narrative about a war of philosophies between two theatre groups in 1970 France that uncovers ancient secrets and faultlines running through all levels of society.

I’ve been working on a few scripts as of late, and I’ve been contributing to a comedy series called The Agents of Fortune. My DJ career (as DJ Nomi for Erase; Rewind) is still firmly in the ‘toiling in obscurity’ phase, but I’m happy to be doing it (Fridays at 9pm on dancemixusa.com).

How does Nashville’s arthouse and repertory cinema scene compare to the scenes of larger towns?

Nashville’s arthouse scene is fascinating. We have The Belcourt, Sarratt, The Light + Sound Machine, and a few screens at the Green Hills 16plex. It’s not among the big three (NYC, L.A., Chicago), but especially with Belcourt and L+SM, you get so much more than a simple experience. Atmosphere, hospitality, and personality go a long way. We still dream big here, and it’s a blast to be part of. Viva showmanship…