This Plucking Rocks! Paula Bressman and Rachel Miller Boldly Go Where No Harp Has Gone Before . . . Fasten Your Seatbelts! 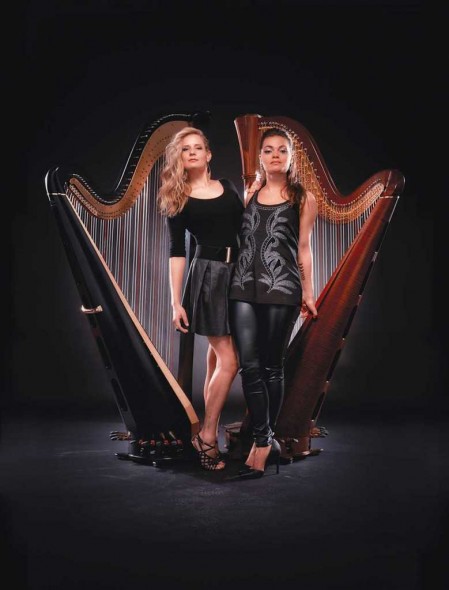 Five years ago, Paula Bressman and Rachel Miller were up for the same part in the Southwest Michigan Symphony Orchestra. Like most auditions for harpists, the competition was stiff, and the contenders sat in pre-audition tension, barely acknowledging each other. It’s not usually the place to make friends, but Bressman and Miller did.

Both harpists earned spots in the orchestra, and when the conductor realized they played well together, he billed them for a harp duo during the orchestra’s summer series. Bressman and Miller found that they complemented each other naturally, and Beyond Pluck was born.

Miller, who lives in Cincinnati, started visiting with Bressman, a Nashville native, for a couple of weeks at a time to prepare for the performance. Their time spent together and the friendship that formed is evident in their duets. “It makes you secure on stage when you can read each other so well and be in sync,” Bressman says. “We fell into a friendship because we played together. Our personalities complement each other really well.” Their performances are studied and passionate, and I imagine an invisible line between them that tugs and gives at all the right moments.

Although both Bressman and Miller are classically trained and perform in orchestras across the country, they are making a name for themselves with rock power ballads. Beyond Pluck seeks to push the limits of the harp by bending genres and seeking out innovative collaborations, as they did in Hart’s “Barracuda” with Nashville drummer Nick Buda. Their cover of The Who’s “Baba O’Riley” is a passionate rock ballad that they hope will make the instrument more accessible to a wider audience. The choice of song is fitting; when Pete Townshend wrote “Baba O’Riley,” he was reaching beyond power chords and call and response into innovative musical possibilities. “Great music is great music,” Miller says, “no matter what genre it is. Many orchestral musicians aren’t on top of current music, while songwriters aren’t up on symphony music. It’s all great music, and I don’t think it should be compartmentalized.”

Bressman was raised on music: Jazz, classic rock, bluegrass, and classical all found a place in her father’s record collection. There must have been something about playing with Miller that guided her toward arranging rock and pop songs. It’s not easy to make a beefy guitar solo suitable for a harpist, but the challenge not only stimulates Bressman intellectually; it confirms her view about the power of a good song to transcend genres. By taking the harp out of its orchestral context, the duo breathes new life into the songs they arrange and perform.

Their goal of collaboration is shown best in a study headed by astronomer and filmmaker José Francisco Salgado along with the Feinberg School of Medicine at Northwestern University. The group gathered data about the relationship between music and neural activity. For years, researchers have been looking into how music stimulates the brain and have made links to everything from infant language acquisition to Alzheimer’s treatment. Salgado, Bressman, and Miller created a music video of the process, showing the harpists’ brain activity while they played and listened to music.

Later this month, Beyond Pluck will release their third music video. They aren’t revealing the title but say it will be a pop song this time around. Based on the power of their performance, it’s sure to be an anthem. They’ll continue to make their work interdisciplinary and will be collaborating with ballet dancers and visual artists this year. “We’re excited about the unexpected places this is taking us, in the people we meet and the collaborations we share,” Miller says. Bressman adds, “We’re building a life in which no two days look the same.”

Look for Beyond Pluck’s latest music video release on June 10 on their YouTube channel and www.nashvillearts.com. For more information and a schedule of upcoming performances please visit www.beyondpluck.com.