A quintessential example of French Impressionism, La promenade dans le jardin by Marcel Adolphe Bain, 1878–1937, is now on view at Stanford Fine Art. In this scene at the artist’s home in Bois le Roy outside of Paris, Bain’s wife hurries after their young daughter as she runs through their garden on a summer day. Bain’s masterful brushwork captures the movement of a fleeting moment.

A Paris native, Bain exhibited at the Salon des Artistes Français beginning in 1903 and won several medals throughout his career. He is best known for his impressionist scenes of the Yonne region of Burgundy just east of Orleans. 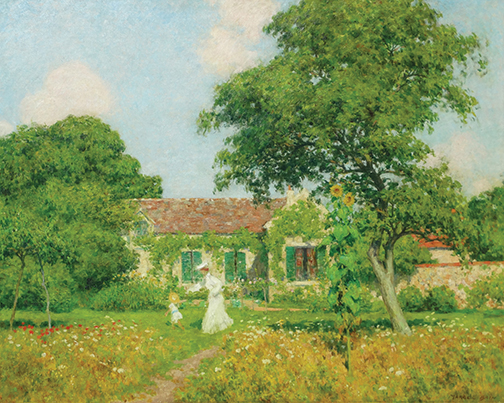 Recently, Stanford Fine Art was recognized by American Art Awards as the 2015 “Best Gallery in Tennessee” and one of the top twenty-five galleries in the nation, along with galleries from New York to Miami and Los Angeles.