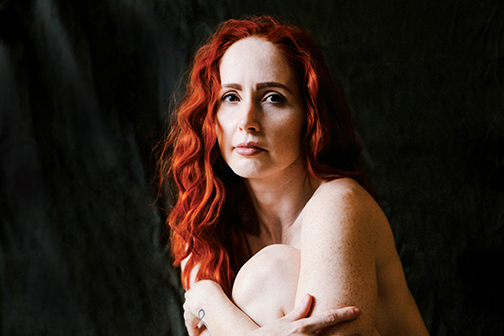 There exists an inherent drama in model Nina Covington’s appearance. She possesses the complexion of an English rose, her milky-pink skin contrasting starkly with her fiery-red hair. There’s also a pocket pixie aura that surrounds her 5-foot-3 frame. And whatever Covington lacks in height, she compensates for with presence and tenacity, emoting for the camera—at times reaching tears. 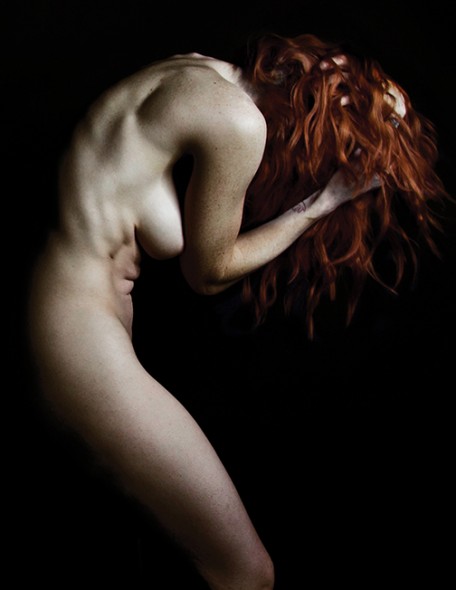 She uses a Shakespeare quote to describe her ability to tease dynamism out of her diminutive package: “Though she be but little, she is fierce.”

During Covington’s time spent posing for photographers, including Jack Spencer, Ara Karei, Adrian David Payne, and Thomas Dodd, she examined where they put their lights and what angles they used. Now this flame-haired muse has parlayed that knowledge into a new life behind the lens. And she brings the same verve to photography as she does to modeling.

Covington says, “I am so passionate that when I want something, I go after it with everything in my power. Everything I do, I go after it hard; I don’t do anything halfway.”

Covington recently created Machisma, a black-and-white photography series that celebrates women’s strength and masculinity. Four works from the series appeared in the Rebel & Riot show at the Arcade’s Corvidae Collective.

As with most of her work, she used only one light, a softbox. “I just like it simple,” she says. “I like the moods and the shadows it creates.”

Each model in Machisma also happens to be topless. This is Covington’s nod to the “Free the Nipple” movement, which advocates that women have the same constitutional right as men to go bare-chested in public.

“Part of that is to demystify the breast, desexualize the breast,” Covington says. “Ours aren’t that different from the man’s breast, other than we can feed children.” 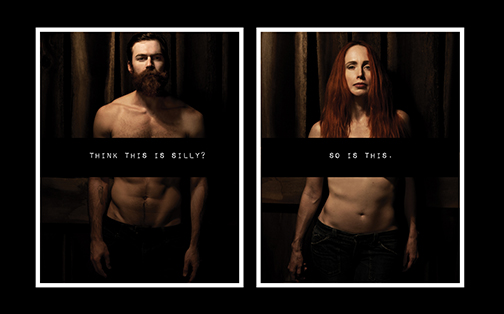 She feels that, in 2015, it is “ridiculous” to have laws governing a woman’s body in ways that are not gender equal. This was the inspiration for an ongoing series entitled Privates. And when people ask her why the Machisma models are topless, her response carries the same hint of devilry as does her fiery hair.

“I say, they’re topless because you ask me that question.” 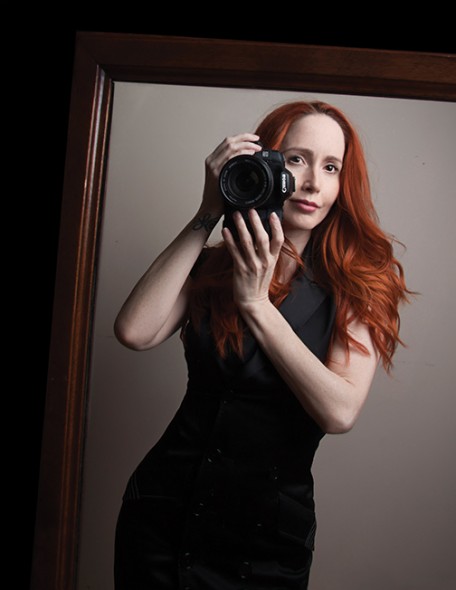 The Machisma series also celebrates the beauty of strength in women. For this, Covington featured a variety of strong women, including one who had undergone a double mastectomy. “That’s strength,” Covington says. “She had something that’s considered her womanhood taken away from her, and she had to overcome that.”

Next up? Covington plans to photograph her 75-year-old grandmother for the Machisma series. “She’ll be topless,” she giggles. “And she is completely thrilled. It’s all about empowerment.”

Since childhood, Covington dreamt of becoming a model. She ultimately overcame obstacles of height and age upon discovering that fine art photography didn’t put her into what she calls a “cookie cutter” mold. (Clearly, she is not one to fit into a mold.)

Covington recently turned 40, and she commemorated the milestone by taking a self-portrait in which she wore no makeup and didn’t edit her skin. It was published in a Giuseppina magazine piece about ageless beauty.

She explains: “I put it out there and said, I’m 40 years old; age doesn’t matter. Beauty doesn’t have an expiration date. We put so much value on numbers—like our weight and our age—and try to equate all of these things with beauty. It’s ridiculous. Beauty isn’t about how tall you are, how much you weigh. It’s your overall package.” And Covington proves the old idiom true: the best things do come in small packages.

Nina Covington’s photographs can be seen at www.ninacovington.net.