Home
Columns5th Avenue Under the LIghts

5th Avenue Under the Lights

by Anne Brown, The Arts Company

The Nashville Artistic Odyssey has been a culmination of initiatives by visionary city leaders dating back to the 1960s. The negative aftershocks of that decade’s Urban Renewal destroyed the community experience of Downtown Nashville. Forward thinkers since then, through deliberate efforts, have launched and relaunched venues such as the Ryman, Frist Center, the Schermerhorn Symphony Center, and Broadway, to name just a few, as an integral part of the strategy to revitalize downtown. Today, businesses continue to collaborate to create a distinctive neighborhood downtown anchored by diverse talent and venues.

Since I came to Nashville in 1968, I have experienced first hand many of these significant changes. Fortunately, in the 1970s, statesmen such as Nelson Andrews, Martha Ingram, Peggy Steine, and Mayor Richard Fulton, among many others, helped realign the city in dynamic ways. In this era, the Tennessee Arts Commission was established, the Tennessee Performing Arts Center opened, and Mayor Fulton formed the Metro Arts Commission. For the first time in the history of Nashville, the arts were being institutionalized as authentic civic entities. 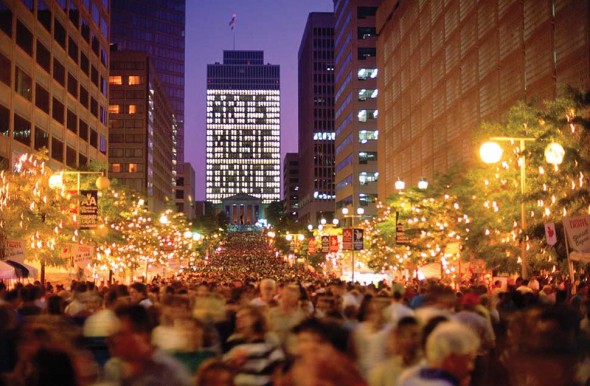 The decade of the 1980s brought artistic leadership with a directive by Mayor Fulton to ask the city’s new Metro Arts Commission to create a Nashville arts festival on the streets downtown to encourage people to come back downtown again. Called Summer Lights, the annual event invited people to imagine a safe and welcoming revitalized downtown, headlined by the distinctive blend of Nashville’s creative community, both profit and nonprofit. Since then, an impressive variety of exhibition and performance venues have evolved.

My own breakthrough experience from all of this was to establish a visible arts business—The Arts Company—in 1996 in the middle of the marketplace downtown to see if such a business could survive. Twenty years later, we are still here and have lots of company. We are now connected with other businesses and activities throughout downtown with an active street life full of events and ongoing businesses and programming that attract people from all over the world to what has become a distinctive Nashville experience in the downtown neighborhood.

Things we could not have imagined just a few years ago are now coming to pass in this year, 2015. Thanks to a blend of institutions, businesses, and government agencies, we now have ongoing pedestrian traffic every day, not just on special occasions—from the music venues of Broadway to the visual arts galleries on 5th Avenue of the Arts and beyond. We all have our many visionary mentors and statesmen to thank for pushing us forward.