The Celebrated Painter Calls Both Nashville and L.A. Home

Upon entering Andy Anh Ha’s 5th Avenue gallery, you’re immediately submerged in the subtle yet colorful displays adorning each wall. The originality that radiates from Ha’s pieces is something no camera shutter could accurately capture. The young artist from Nashville, Tennessee, has a unique aesthetic that he has adapted through years of experimentation, and it must be surveyed face to face. 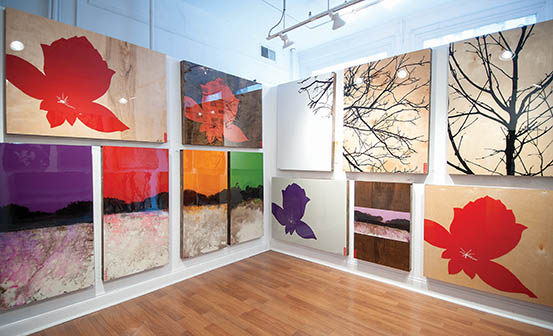 Up close, Ha’s work is overflowing with detail—from an unknown fusion of acrylics and oils to thick layers of high gloss that give the illusion that each piece is encased in glass. What’s perhaps most intriguing is Andy’s use of hand-built wooden boxes instead of canvas. He explains what sparked the unusual concept: “My first commission painting was a 4 x 6-foot city scene of Nashville. I didn’t have the funds to buy or stretch my own canvas at that size . . . I thought about my high school years and my summer job framing houses and went to my local lumber yard. It’s all about being resourceful. And that was the beginning of my overall look with the wood boxes.” 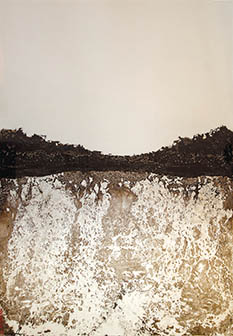 Ha’s effortless combination of “modern but traditional” style is captivating, and it’s easy to see why members of Hollywood and the international community are just as enthralled. His work has been purchased by the likes of Bruce Willis, Jessica Alba, and Amr Abdullah Al-Dabbagh, and has caught the attention of judges. In the last few years, he’s won at least a dozen awards at prestigious events, including the Gil Gorbos Award for Most Original at the Beverly Hills Affaire in the Gardens.

However, speaking with Andy one would remain unaware of such accolades—the artist is pure humility. Jack Bloom, Gallery of Andy Anh Ha Art Rep, explains that Andy’s passion has always been the driving force. He says the artist wants those who appreciate his work to afford it, saying, “He is very humble, and I respect that.”

Along with Ha’s humility comes a strong appreciation for his childhood and culture. His parents are Vietnam refugees who came to Tennessee in 1980 with the help of a man named Harold Whetstone. Ha was raised in Music City and later graduated with a bachelor’s in fine arts from the University of Tennessee.

The artistic encouragement he received while growing up inspired him to keep going, and he eventually moved to California, where he currently resides. However, Nashville will remain the city that made him who he his.

“I believe in Nashville. I think we have more hidden creativity than any other city I have visited. Nashville is heading in the right direction. I just want to be a part of it.”

Andy continues to display his work in the Nashville gallery, as well as others throughout California. His work can also be seen at the festivals and shows he attends nationwide, where he hopes patrons glean the creative simplicity of his art. “Enjoy my work; take it as it is, and see it again tomorrow.”

To see more of Andy’s work, please visit his website www.andyanhha.com or call to set a gallery appointment.