Giving its viewership another reason to beat the summer heat and stay indoors, NPT’s broadcast of niche content from the PBS global documentary curator POV brings tales from around the world right to your living room.

Among the lineup, one movie stands out from the rest of the month’s schedule. Boasting a topic as bizarre as it sounds,

Web Junkie christens China as the first country facing a scaled addiction to the Internet. Visiting a Beijing rehabilitation center, the movie goes into the halls of a facility housing teenagers as they are detoxed from video games and other online media. Mentally distant from home and school, the escapism-turned-crutch of digital entertainment is widely blamed for sick behavior that has spawned delinquency.

Dissecting the lives of several young men, Web Junkie packs so much into less than an hour—a new way of life, a new problem, and unorthodox solutions against the backdrop of a mystery of social guilt. 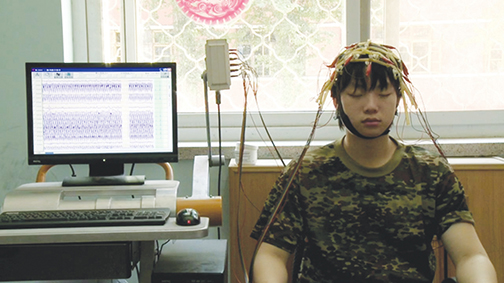 A scene from the documentary Web Junkie, directed by Shosh Shlam and Hilla Medalia. Photograph courtesy of Dogwoof Global

With respect to the parents, patients, and filmmakers, the documentary is interesting because you don’t fully trust it. The film itself may be accidental propaganda, as it limits its continuum to a military hospital whose patients claim to be literally kidnapped. What are the facts here? What’s being withheld and distorted from our view? And is comparison of Internet use to heroin fair?

Or is the Internet a scapegoat for greater problems found in China?

The inquisition against the grain of the film’s objectivity makes it an analytical pleasure to decode. The real enjoyment comes from the provoked discussions on technological reliance that are bound to follow the film’s viewing.

Web Junkie screens July 13 at 9 p.m. as part of POV’s latest season. Be sure to visit www.npt.org for full details about their schedule, including their online film festival.