As Nashville continues to experience explosive growth, photographer Hank DeVito’s new exhibit shows us the way we were in the 80s

Place matters. Especially to photographer, composer, and multi-instrumentalist Hank DeVito, who moved to Nashville from Los Angeles in the early 1980s. Even though Nashville traffic is now forcing him to take back roads as he once did in Los Angeles, DeVito still considers Middle Tennessee perfect. “People are nice, and it’s a creative safe haven, a music center filled with wonderful photographers and artists.”

DeVito was in the right place (New York, San Francisco, and Los Angeles, in the clubs and studios) at the right time (the 1970s) for the beginnings of country-rock. He broke onto the scene in New York in 1968 as a composer and player. 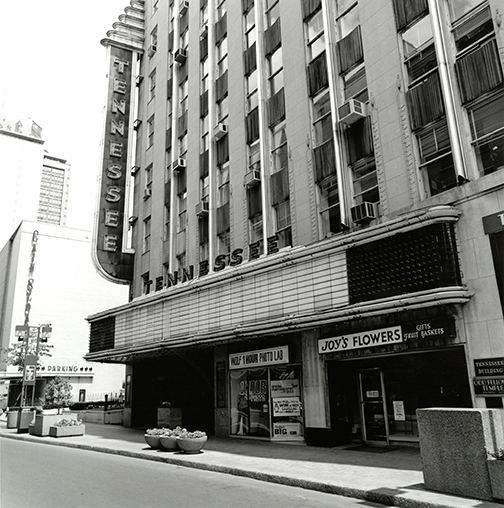 By 1975, he was a sought-after instrumentalist, anchoring Emmylou Harris’s Hot Band with his pedal steel guitar. In 1980 while touring with fellow Hot Band member Rodney Crowell, DeVito, who was tired of big-city living, began to find respite in between tour schedules in the slow pace and pastoral green surroundings of Nashville. In February 1981, he moved to town, followed six months later by Crowell and Rosanne Cash, just as her career also shifted into high gear.

Today, DeVito remains a vital force in Americana music with three cuts on Harris and Crowell’s recent Grammy-winning Old Yellow Moon. Yet not all of his fans know that he has led a parallel life as an artist. His recording credits, which run to twelve pages, include a Grammy-winning album cover photograph. 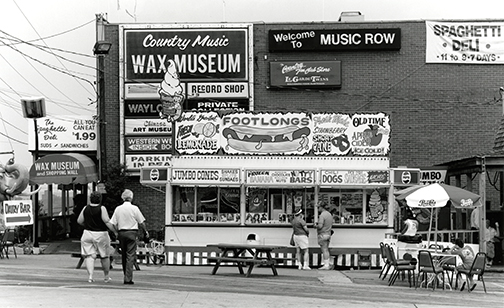 After high school, DeVito won a scholarship to the prestigious School of Visual Arts in New York where he studied graphic arts. Portfolio in hand, he hit the streets. But starting at the bottom to make a career in graphic design paled in comparison to the opportunity to play live music and make money. Of San Francisco in 1974 he says, “You could play every night of the week there were so many clubs,” and by February 1975 he was in the midst of a burgeoning music scene in Los Angeles.

Inspired by photographer Berenice Abbott’s Changing New York series of the mid 1930s, and by Walker Evans, who often trained his lens on odd and unique buildings, DeVito began to carry a camera whenever he was on tour, hitting the streets of small and large cities across the country on afternoons before sound check. His project was to capture the cities of his own time, saving memories for the future just as Abbott and Evans had done. The formality and simplicity of DeVito’s presentation and his exacting compositions and crisp resolution join him to the same distinguished history of documentary photography. 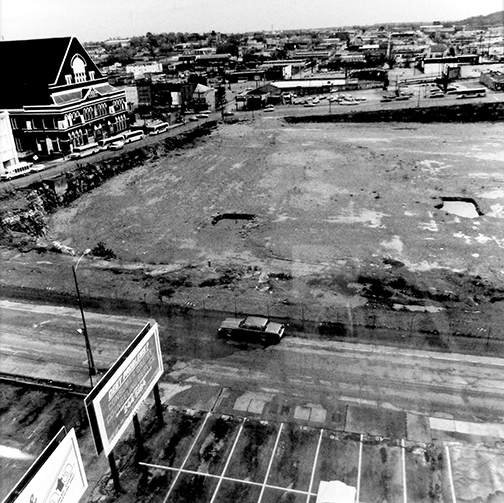 At times the music and images coalesce, as with a hand-colored shot of a Louisville record shop owned by Gene King, brother of country star Pee Wee King, who co-wrote “Tennessee Waltz” and introduced rock instruments, such as drums and electric guitars, into country music. DeVito used the store as a backdrop, superimposing his own portrait of Rosanne Cash. King’s Record Shop (1987) won a Grammy for CBS Art Director Bill Johnson and produced four #1 hits for Cash, including “Runaway Train.”

With Nashville now on its own runaway train of development, we are fortunate to have DeVito’s Nashville images, assembled by Tennessee State Museum Curator Renée White into an exhibition entitled Places I Remember. Taken with a large-format camera, they record “mom & pop” establishments and the plainsong utility of signage painted directly onto brick and concrete. In the alley next to the Ryman, Welcome Opry Boys behind Tootsie’s Orchid Lounge reminded players to stop in after the show. Sho-Bud is the shorthand logo of Harold “Shot” Jackson and Buddy Emmons, the 1955 inventors of the pedal steel guitar. 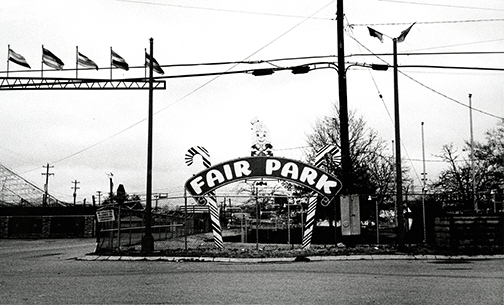 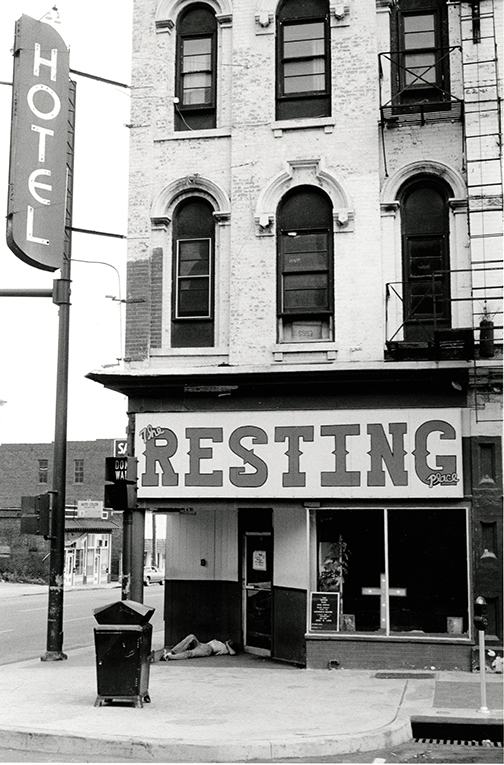 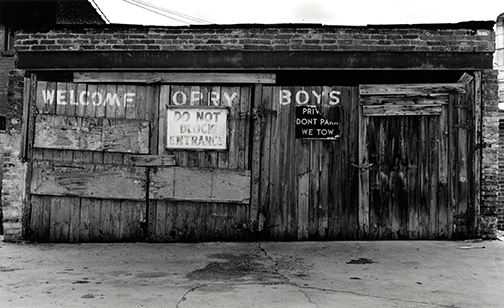 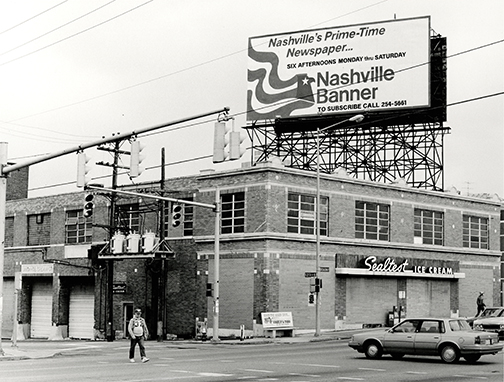 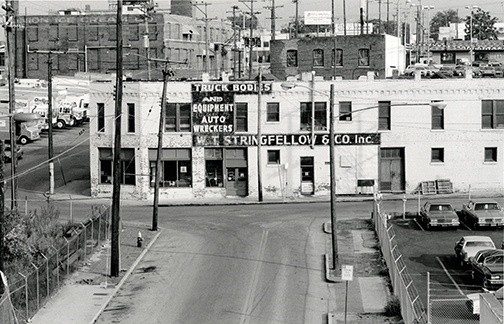 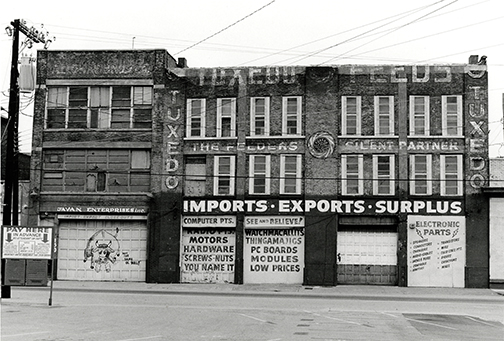 Mostly, DeVito photographed on Sunday mornings when the town was emptied out. The vulnerability of a sleeping figure passed out in the covered entrance to the old Merchant’s Hotel, at the corner of 4th and Broadway, with an electric cross in the front window speaks eloquently of the needs and wants of those on lower Broadway before it became a historic district. Nashville’s past as a shipping center for agricultural and industrial materials is revealed in Acme Farm Supply, Tuxedo Feeds, and Steiner Scrap Metals. The Block Building, just south of Broadway, advertised walnuts, ginseng, and hides in tall, hand-painted block letters that enhance the geometry of the façade itself—the words remnants of a time when Nashville was a frontier trading post.

DeVito explains, “It has taken thirty years for these images to have validity. Most of these buildings are now gone.” His wish is that his photographs might reclaim for us our own memories of Nashville’s many vanished common places. “It’s hard to describe something that is gone out of your mind unless you have a visual.”

Places I Remember will be on exhibit at the Tennessee State Museum from July 3 through October 4. For more information, please visit www.tnmuseum.org. 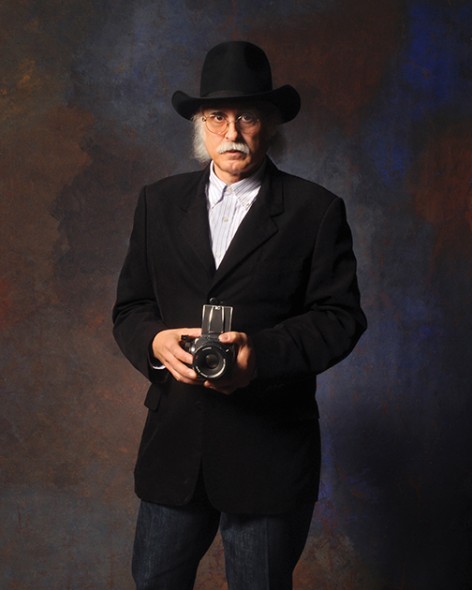