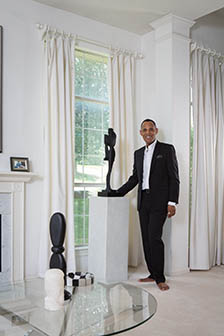 Tarrance Hurd in his living room with his collection of art. – Photo by Sheri ONeal

When your art collection is as personal as mine, it is really hard to pick a favorite. Is it the Ridley? Greg Ridley was a dear friend! As my art professor at Fisk University, he is largely responsible for my art aesthetic. Jamaal Sheats is more of a family member than a friend. I have known him since he was a child and have watched him grow into a phenomenal artist. The piece commissioned by his mother for my birthday present was inspired by my profession as a modeling and talent agent and incorporates Jamaal’s signature umbrellas. It is definitely a favorite. While I was in graduate school, my boss was a personal friend of Polly Cook and collected her works extensively. At a company Christmas party at his home, I told myself I wanted something by her. So my Polly Cook vase is another favorite. As are the works by James Threalkill, Danny Broadway, Edith Costanza, Charles McGruder, and my portrait by Cecil Withrow. But if I must name a favorite, I must pick the centerpiece of my art wall.

It is a piece by the late Marvin Posey. Marvin was a dear friend and talented artist who passed away at an early age. Our birthdays were three days apart. In 1998, I held an art show at my home for Posey. The first piece he hung was already red-dotted as sold. By the end of the evening I asked who had pre-purchased that piece before anyone arrived. He said that it was a gift to me. He had asked weeks earlier about my favorite instrument, and I had told him it was the saxophone. When I asked what was it titled, he said Terrance’s. It is bold in vibrant jewel tones and has a sense of movement that I seem to appreciate in a lot of my collection. I guess that would have to be my favorite piece of art. It brings me joy daily as I remember my friend. It also makes me very emotional as it reminds me of a gifted life that ended way too soon!

Marvin Posey, Jr. was a working artist who painted in a variety of styles. Born in North Carolina, Posey made Middle Tennessee his home. At Clarksville High School he excelled in art, winning an award and exhibiting his work at the Knoxville Museum of Art. He received scholarships to Austin Peay University for both art and football. After graduation, Posey tried numerous job options outside of the arts, but he struggled to make painting the focus of his life. He found his way and became a performance painter, creating—while on stage in front of a large audience—expressive works that reflected the spirit of the live music playing. He died at the age of 38 of a heart attack after a public performance in Atlanta. His vibrant paintings of musicians carry on his legacy as a passionate artist.