“We’re trying to broaden the definition of what a landscape can be,” says Dane Carder, who co-curated Land Rush, the new group exhibit that’s running through July at the David Lusk Gallery in Nashville.

While summer can be slow for galleries and a time when most shows consist of work from inventory already on hand, Carder says that he and owner David Lusk wanted to expand what was on the walls. “We wanted to give people an incentive to get here.” 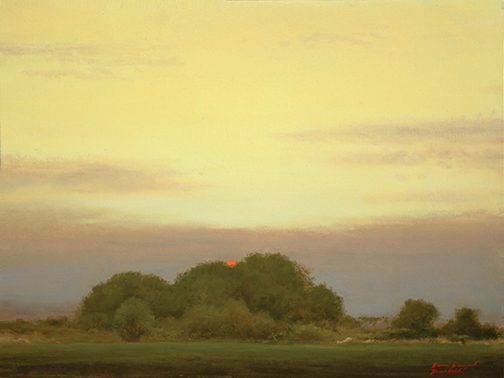 And that’s what they’ve done. Land Rush is a dynamic show that dilates the notion of what landscape is. From straightforward representations of the land in the paintings of Bruce Brainard and Peggy Root to the more abstract work of Kathleen Holder, Kit Reuther, and even Karla Wozniak, the exhibit features over twenty artists expounding on a theme rather than remaining anchored to it. There’s a sense, as well, that the disparity of shape, size, and mediums that include paintings and photography, sculpture and bronze work reflects the variance of land itself. And there is work from Grandma Moses, who didn’t begin painting until her seventies. Her personal story and the rural paintings she produced in those final years are reason enough to make it out to the opening reception on July 11. 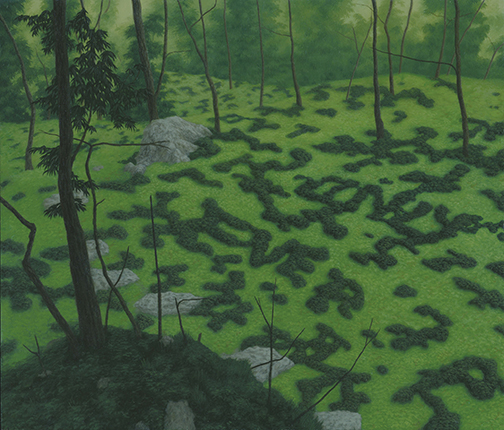 Local artist Rob Matthews, who draws primarily with graphite, explains his approach to landscape saying, “It freezes a patch of land in time.” Matthews recently returned to Nashville after fourteen years in Philadelphia and says, “It’s an honor to be included in this exhibition. The Lusk has been a great addition to Nashville.” In addition to art, Matthews terms a landscape “a historical register,” something that documents growth and decay. “Everything represented in a drawing is in process,” he says. “Trees are either growing or past their peak and on their way out; rocks are being gradually smoothed over by water.”

Moss Garden by Nora Sturges perhaps most completely encapsulates the exhibit as it calls attention to the relationship between landscape, art, and observer. The landscape in the painting has itself become a canvas as the beginnings of words have formed in the moss. 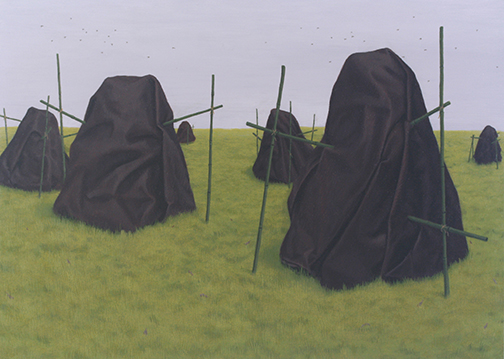 Sturges can’t remember exactly when she started working in such a small form. “It’s been ages,” she says and adds, “I think of my paintings as head-sized—an extension of an interior vision.” That translation, from interior to exterior, perhaps explains why there’s something in all of her obsessively detailed paintings that points to the absurd—whether it’s large spaces held to a mere 8” x 11” or how Sturges manages, by use of proximity, such odd combinations. A steak, an egg, and a chicken leg in Floats, for example, are mounted on stages next to some junk set against a horizon. Or Mounds. What’s under there? Why are they scattered in that field? 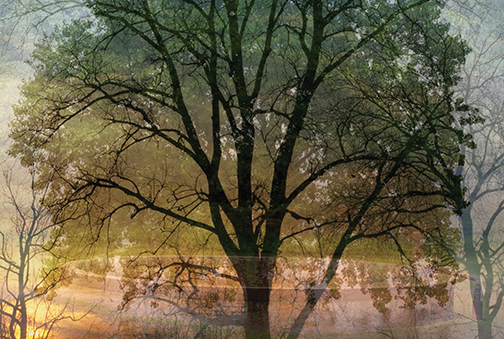 So much of this show is about reflection. Tennessee native Maysey Craddock’s body of work in particular speaks to the relationship between nature and us, as well as nature and itself. There’s a Rorschach-Test-like balance, a mirror image of landscape on landscape. Sometimes it’s two trees mirror-imaged directly below. With others it’s branches hatched in the foreground of other trees.

Craddock typically combines drawing and gouache paints on sewn found paper and admits that, at least in terms of materials, her work in Land Rush is “a bit of a departure.”

After the Rains is a photograph printed onto three large panels of glass that, as they lean toward the wall, cast shadows of the image, “staggering the visual experience and creating a sense of movement, fragmentation, and perhaps,” she says, “insinuating the always-present forces of decay and regeneration in the landscape.” 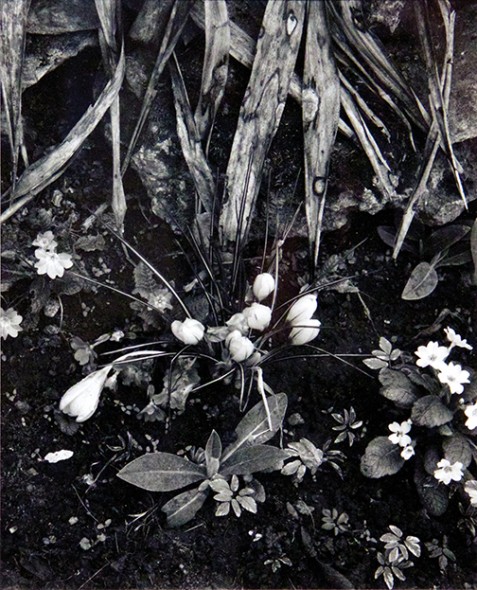 She posits that in addition to introspection and the sublime, her work speaks to the idea that “perhaps we have a need for nature/landscape to give us a spiritual jolt—a reality check—hence the idea of reflection.”

This need, this reciprocal relationship goes both directions. It seems as if a landscape is only a landscape when it is observed. The same could likely be said about art.

Land Rush will be on exhibit at David Lusk Gallery July 7 through 25. An opening reception will be held on July 11, 6:00 to 8:00 p.m. The gallery is located at 516 Hagan St. and hours are Tuesday–Saturday, 11 a.m. to 5 p.m. For more information please visit www.davidluskgallery.com/nashville.