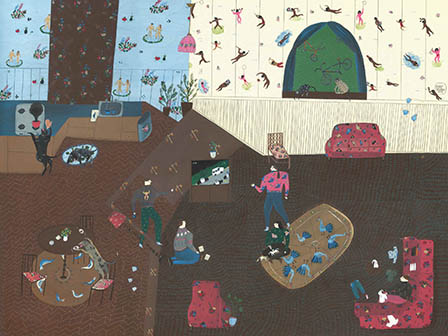 In 1994 A Car Chase Happened That Had The Effect Of An Immobility Spell On Our Neighborhood And Also The Whole Country. We Were Mesmerized And It Was Terrifying., 2015, Acrylic and pencil on wood, 18” x 24” 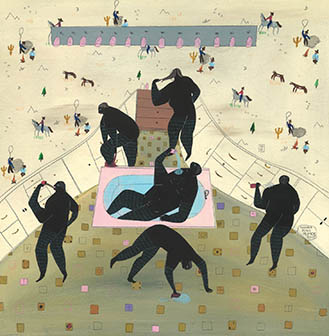 We Were Not Rich But We Were Not Poor. In Junior High I Met Children Who Lived Eight To A Small House. When I Imagined Them Living On Top Of Each Other In Such Close Quarters I Could Never Decide If That Kind Of Closeness Was A Comfort Or A Snare, And I Suppose I had No Business Imagining Either One., 2015, Acrylic and pencil on wood, 12” x 12”

The Washington-based artist is as much a storyteller as she is a painter. She was adopted as a baby and says she felt like an outsider growing up in her home. She became observant, always looking out into her immediate world for kinship and understanding. “I paint about connections with other people and the magic in that,” she says. Her work reflects a childlike perspective that is as knowing as it is naive. Like all children, she filled in gaps of understanding with her own limited knowledge and a bit of imagination. She gives her paintings long narrative titles that also reflect both the familiarity and the magical realism of her work. Some viewers will instantly identify with a title like As Young Girls So

Much Of Our Adolescent Power Was Spent Willing The Phone To Ring, And When It Did It Seemed The Whole Universe Had Sweetly Tuned Itself To Our Wants, And When It Didn’t It Seemed The Blackness of Space Would Forever Conspire Against Us. Other paintings read more like science fiction or occult literature: The Spaceman Would Not Let Her Come With Him, Nor Would He Stay.

And herein lies a huge draw for her work. Heimer’s sense of isolation permeates her paintings. The narrator is almost always on the periphery, removed from the commotion. This distance sometimes drops away in startling ways as she plainly expresses something deep and difficult about her experiences. Again, you find it in the titles: You Gave Me Away When I Was Born. This Is True Whether I Am Lost In The Forrest, Wading In The Ocean, Or Walking In The Zoo. I Still Look For You, Do You Look For Me? In this painting, men and women stand on a hillside at sunset, occupied with their own small affairs. The narrator is not present, but the feeling of deep grief and isolation is palpable. 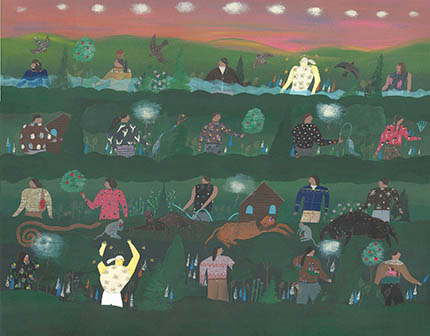 You Gave Me Away When I Was Born. This Is True Whether I Am Lost In The Forest, Wading In The Ocean, or Walking Through The Zoo. I Still Look For You, Do You Look For Me?, 2015, Acrylic and pencil on wood, 16” x 20”

Heimer abandons photorealism for a form that is much more true to the way memory works. She made the choice early on to eschew perspective: the figures in her paintings don’t cast shadows, very little is drawn to scale, and there’s an overall lack of physical depth. This doesn’t render as a pictorial naiveté but rather reminds us of how our memories wrap around events and contort them, exaggerating some details while jettisoning others. The results are rich with color and detail. Wallpaper and bed sheets have detailed patterns like tiny dancing couples, little teddy bears holding two balloons, or swirling tornadoes. These often suggest the theme of the painting. It’s these details that make Heimer’s work such a treat. There is something obsessive and lonely in them; the visual clutter produces an anxiety in already absurdist scenes. 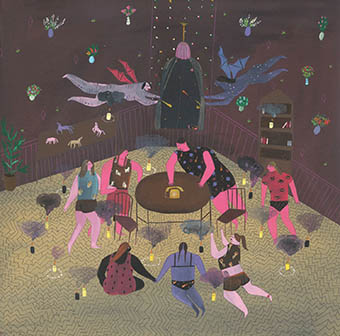 As Young Girls So Much Of Our Adolescent Power Was Spent Willing The Phone To Ring, And When It Did It Seemed The Whole Universe Had Sweetly Tuned Itself To Our Wants, And When It Didn’t It Seemed The Blackness of Space Would Forever Conspire Against Us., 2015, Acrylic and pencil on wood, 12” x 12”

The lack of lineal perspective draws attention to a theme in her critique of suburban life: what’s on the surface may not be what’s really going on. For example, Heimer doesn’t shy away from issues of race in her work. She depicts Black families and American Indian peoples regularly. “I grew up in Montana, and there wasn’t a lot of racial diversity. We didn’t have a lot of Black people, but there were tons of Native Americans and many of them lived on reservations. They live over there, and we live over here. I was always uncomfortable with that,” she says. This is just one example of social mores that are played out in her paintings, bringing depth and intentionality to otherwise innocuous scenes.

See Andrea Heimer’s work at CG2 August 1 through 28. A reception for Recent Works will be held August 1 from 6 to 9 p.m. For more information visit www.cg2gallery.com.