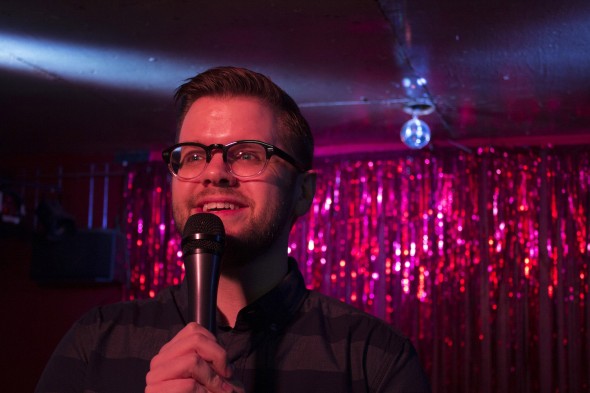 Sean Parrott is a ten year veteran of the Nashville comedy scene and has performed on nearly every stage in the city. I profiled him in the September print edition of Nashville Arts. Here is the full interview:

Obligatory question about how you got started.

I got interested in stand-up the way most people do: I was writing plays in college and looking for a more self-centered way to make people laugh, without all the trouble of sets, costumes and, worst of all, actors. (Don’t trust anyone who wants to lie for a living.)

My most memorable moment was in Murfreesboro. You can tell by where it happened that this is not a story of triumph. I was telling jokes at The Boro, where they have open windows. After a joke, I heard a loud, “Boo!” From outside. It’s tough to be heckled by someone standing on grass. Since then, I’ve worked on improving my jokes. Mostly, I never perform while windows are open.

With all the showcases, open mics, and weekly shows at The East Room and other places, the Nashville comedy scene is in a really good place right now. Who are some of the key players?

Chad Riden runs Nashvillestandup.com, which has all the information you need to catch a show in Nashville. If you want to perform at an open mic for the first time, go to Ultimate Comedy at The East Room (Every Tuesday night at 8:30.) My friend Brad Edwards hosts it and there’s usually a great, supportive crowd. A friend of mine even called it,”Too easy.” (A “too easy” crowd is something I have never complained about.)

That was a bunch of names.

How do you see our scene in comparison to the scenes of Los Angeles and New York?

I think we are on a whole different level than the scenes in New York and L.A. (Not higher.) Right now, some of the most talented people move on to bigger cities where there are more opportunities to perform and get work. As the scene grows, I hope more people stick around and we can continue to grow.

If anyone who works for the TV show Nashville wants to write a subplot about life as a stand-up comedian in Nashville, I know some guys. We will go to the gym to get in TV shape. (If you need just one guy, I am the best and please do not meet with any other Nashville comedians.)

Where do you see the local scene five years from now?

I think we’re going to keep growing. I would love to see more showcase shows in Nashville. We have a good amount of places to try out new stuff but very few opportunities to do longer sets. Venue owners: Holler at me about our partnership in engineering the future of comedy in Nashville.

Where can we see you next?

You can see me host Dive Laughing at the Springwater or play “sweet licks” (my words) on Tuesdays at Ultimate Comedy at the East Room. I’m also writing a new funny music EP so they can keep on eye out for that on my website seanisok.com. Be my social media friend (Facebook: /seancomedy Twitter: @seanparrott) to see whatever silly videos we think of next.

Check out NashvilleStandUp.com for upcoming shows and YouTube.com/SeanParrottComedy for Sean’s stand-up and music videos.

Sean was kind enough to provide us with a breakdown of the weekly comedy happenings with selected commentary:

Red Eye open mic at Wilburn Street Tavern. Sign up at 10, show at 10:30. “This show is very smokey and goes pretty late, so it’s usually strange but fun.”

(First and Third Wednesday) Dive Laughing open mic at The Springwater. Sign up at 9, show at 9:30. “I host this and it’s usually OK.”

Spiffy Squirrel at The East Room, 6:30. “Chad Riden hosts. Recently they’ve had some REALLY great people on it like Ryan Singer, Myq Kaplan, and Dave Stone.”

Check out www.NashvilleStandUp.com for upcoming shows and YouTube.com/SeanParrottComedy for Sean’s stand-up and music videos.