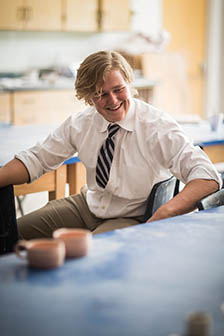 Wyatt Maxwell’s favorite artist is Pablo Picasso. “I find that the art he made was amazing, but not as good as some of his quotes, with my all-time favorite quote being, ‘Every child is an artist. The problem is how to remain an artist once we grow up.’ This quote really speaks to me always wanting to keep art in my life and always being able to hop on a wheel and make something.”

While taking Ceramics 1 and 2, Wyatt realized that with work, he could be pretty good at making ceramic art. “During the summer before my senior year, I worked like an absolute madman and was able to get my skill level to a point that taking AP 3D Design was a possibility. Since then, I have still been working like crazy, but I have also been able to try out foam sculpture, woodwork, and metal/blacksmith work, which are very different and fun.”

One of Wyatt’s favorite projects was a self-portrait bust in a baseball uniform. “It was daunting. You make the head, then you shape the eye sockets and then you have to make all the facial structures. It took a really long time to make the ears and eyes look right, and I had to keep looking in the mirror to make it look like me.”

Wyatt has been recruited to play baseball at Rhodes College this fall. He was also awarded a partial art scholarship, so he hopes to minor in art. “I’m going to have to balance academics, baseball, and then I also get to do art, which is great.” 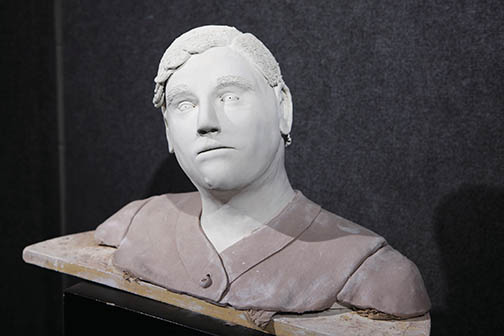 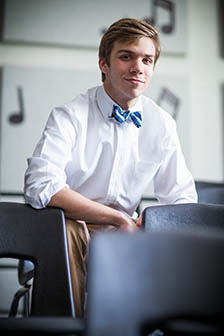 “I plan to continue performing my whole life and actually hope to pursue musical theatre professionally! When I was younger, I was scared to want to be a performer because I thought that success was unrealistic. However, one thing that the Arts Department at FRA has taught me is that personal success and commercial success are hardly related. Seeing my teachers so passionate every day has helped me realize that success is defined solely by how happy you are on a day-to-day basis, which has given me the courage to pursue what I love.”

Since he could remember, Spencer has loved music and singing. He has played Suzuki violin since he was 5. He auditioned for every solo in grade school and started participating in school musicals in the 5th grade. 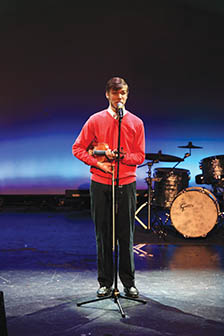 Spencer Meeks, singing “The Christmas Waltz” in Cocoa and Carols

“My love for performing has only grown as I’ve tried my hand at all the different mediums of performance that FRA has to offer. The administration worked with my academic schedule to allow me to participate in band and choir. I’ve always been happiest onstage, no matter the reason.”

Spencer considers one of his greatest strengths to be the more technical side of singing. Because of his background as a violinist, he has an easier time with pitch, tone, rhythm, and sight-reading than a singer who has never played an instrument. Employing this technical knowledge with his diligence at practice and enthusiasm for the art makes him a better vocalist.

“Life can completely change direction at any moment, but no matter what I end up doing, I will always at least belt my heart out in the shower.” 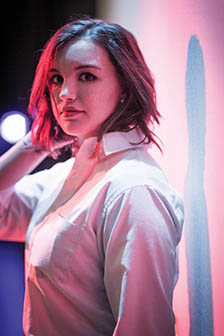 “Musical theatre is my absolute passion,” Hannah Blankenship exclaims. She was three when she made her stage debut dancing in Swan Lake, but it wasn’t until she did her first musical, Seussical, in sixth grade, that she completely fell in love with performing and knew that there was no going back. Since then she’s had major roles in every school performance, relentlessly throwing herself into her parts and giving it her all no matter how tired she may be.

While her dance experience and 3.5-octave range give her an edge, her success comes from being a devoted student of the art. She listens to her directors and studies the performances of upperclassmen.

“I like to consider myself very well rounded. I sing, act, and dance, but
I also do a lot of costuming, set, and prop work, which improves my overall understanding of the theatre and everything that goes into creating a show. I really want to learn about lighting and sound in addition to improving my on-stage performance.”

Hannah has taken all the drama classes available at FRA, so during her senior year she plans to audition for every performance and hopes to be able to take an independent study, while continuing with choir.

After high school, she says, “I definitely plan on pursuing theatre after high school. I hope to double major in musical theatre and creative writing up north, then continue acting wherever I can while also working as a freelance editor or a children’s book author. I’m also very interested in running my own theatre company at some point down the road.” 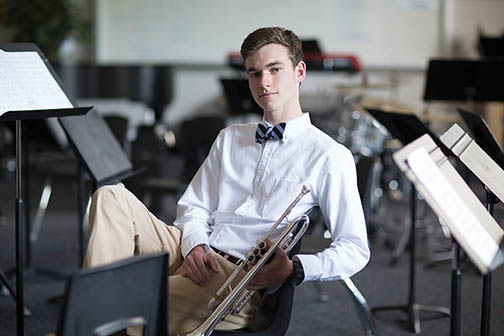 Joseph Chandler learned to play saxophone for his 4th grade talent show. Saxophone is his father’s instrument, so he picked it up because it was convenient. In 5th grade he saw some upperclassmen playing trumpet and was so impressed he switched.

“I have always aimed to be like Freddie Hubbard, Bill Chase and all the other great trumpet players,” Joseph explained. “I consider my strengths, musically, to be my diversity in styles, having played in many jazz bands, Vanderbilt’s Curb Youth Symphony, as well as in my church orchestra.” 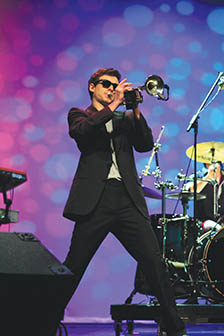 Joseph Chandler playing trumpet in An Evening with the Arts

Joseph started in band in 5th grade and stayed with it throughout high school. He has also taken private trumpet lessons once a week, as well as guitar lessons. In his sophomore year he joined choir, which he explains was very helpful with pitch, timing, and overall music theory and ultimately made him a better musician.

Joseph would like to work with R&B and Pop artists but says that it is entirely conceivable that he’ll work with country artists since he plans to stay in Nashville.

As far as pursuing his own musical talent, Joseph says, “I enjoy playing music, but I wanted an opportunity to have more steady income—realistically. I have a lot of musician friends, and I do see myself playing a lot in the future. I don’t see that ending anytime soon.”