At Seed Space Voyager One Puts Viewers in Their Place

Artists Kristina Estell and David Bowen have assigned red, blue, and green color values to the angles between the earth, the sun, and the Voyager 1, the space probe launched by NASA in 1977. More than thirty-seven years later the craft continues its study of the outer solar system, communicating with the Deep Space Network, receiving commands, and returning data. The probe’s mission officially came to an end in 1980 after Voyager 1 provided detailed images of Jupiter and Saturn and their moons. In 2012, Voyager 1 was the first probe to enter interstellar space. 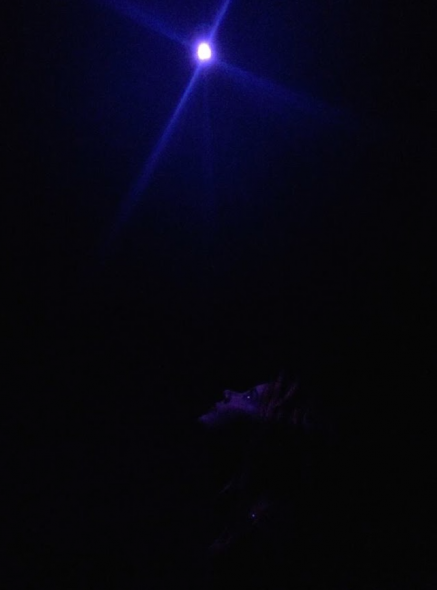 As the probe continues its interstellar journey and the earth orbits the sun, these angles constantly change and so do their color values in the artists’ model which can be seen on their website, on display in the gallery. The little light at Seed Space is gradually shifting between various shades of purple. Although it’s imperceptible, the exhibition is in a state of constant transformation as our planet and the probe do their daily dance.
One of the best recent shows at Seed Space was Rocky Horton’s All the Lights in My House. That installation featured a display of the lamps and chandeliers from the artist’s home, leaving the gallery haunted by the second half of that exhibition—Horton and his family living without electric light for the run of the show. Seed Space’s new exhibition, Voyager One, has a lot in common with that installation: in place of a collection of lamps it features one tiny light in a gallery made nearly completely dark by blackout curtains. While Horton’s lights reminded viewers of his darkened house, this little beacon creates the felt presence of an object that’s literally no longer in our solar system.

Art often puts us in touch with ourselves—our feelings, our bodies, our thoughts. It seldom offers us a palpable sense of that gargantuan “everything else” that makes up nearly all of this vast place we inhabit. Voyager One is a tiny display with big implications, and just like Horton’s show it reminds us that we—and everything else—are mostly just bumping around in the dark.

Voyager One is on exhibit at Seed Space through September 14. For more information, visit www.seedspace.org.