Imagine a Canadian rock duo at the peak of its career performing the only live venue in the world that cuts and records direct-to-acetate, without any editing or trimming. Imagine a dimly lit stage and blue walls plastered with typical Third Man Records curios, Edison lights and a stuffed elephant head. Without a bit of a wild imagination, it would be difficult to visualize how Death From Above 1979 is wrapping up its reunion tour, especially after years of not knowing whether the members were going to collaborate again or not.
However, after a two-month delay period, DFA 1979 is set to play The Blue Room at Third Man Records on September 30 at 8 p.m. (doors open at 7 p.m.) 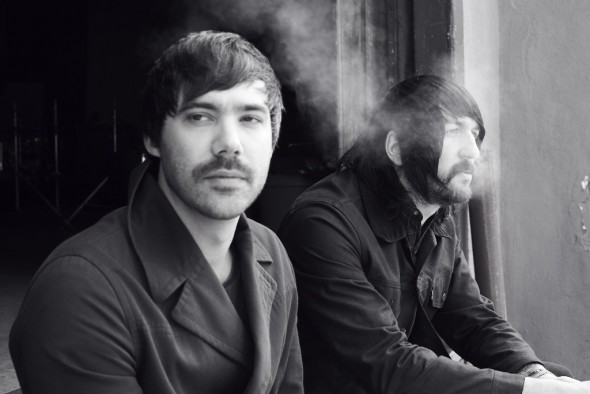 Death From Above 1979 Photograph by Pamela Littky

Sebastien Grainger and Jesse Keeler first teamed up in 2001 in Toronto, Ontario. Their 2004 album, You’re a Woman, I’m a Machine, brought them international attention, reaching No. 84 on the UK Albums Chart and selling over 175,000 copies worldwide.
It was because of this success that their fans were shocked when, in 2006, they disbanded and pursued other musical outlets. Keeler put his heart into his electronic DJ group Master-craft, and Grainger began to focus more on his solo project Sebastien Grainger and the Mountains.
Although these projects indicated a dramatic shift in style for the members of DFA 1979, their die-hard fans were relentless in begging them to return to the stage under that name, and it eventually paid off.

After five years of not speaking to each other, Keeler and Grainger graced the main stage at Coachella in 2011 with the hyper-punk rock that their audience had so painfully waited for — and now, on the last leg of their second US tour promoting their 2014 album The Physical World, they look ahead to their final show at Third Man Records as an opportunity to “unleash” from what has been the busiest season of either of their lives.

The Blue Room session was originally set to be on July 16, but was rescheduled for what Grainger calls “boring problems.”
It will be recorded and sold by Third Man Records, and it will be the only live album of DFA 1979’s reunion tour released.

NAM: What do you like/dislike about playing in Nashville?

SG: We have a very long-standing philosophy to treat every show the same no matter what it is. Whether it’s a big greasy show in front of a bunch of people, or a small show in a bar, we try and deliver the same amount of energy and we try not to discriminate between city to city. We’ve had some great shows in Nashville; we’ve had some weird shows in Nashville. That’s like anywhere else, you know? Sometimes it’s even hard to tell the difference.

NAM: A lot of people say that your post-reunion album, Physical World, sounds more pop-produced and clean-cut than your first album You’re a Woman, I’m a Machine. Would you agree with this?

SG: Oh yeah, it’s totally more produced. In particular, with the singles, we kind of let our producer Dave Sardy step on the gas a little bit. He didn’t know exactly what to do with our band. I mean, who would? At the beginning, he was just trying to find singles for us. He was like “what are your singles? Do you even have any? You brought me all this music, but you don’t have any singles.” He was a little confused by it. Finally we just showed him some of our other ideas like “Virgins” and “Trainwreck 1979.” These were both songs we wrote after meeting Dave, and he told us they were great. So Jesse and I worked on finishing up those songs for like a month, and then we brought them back to him in pre-production and we got started. So that was where it felt like we were really dealing with a Hollywood production studio kind of deal, you know? I mean we basically had an oral agreement with Dave that we wouldn’t stop working on these singles until he was happy with them. That’s what we hired him for! He has these little tricks that he bestowed on us that really helped make the songs what they are. It was a very laborious process, but I’m happy to have had this process involved in making this record. 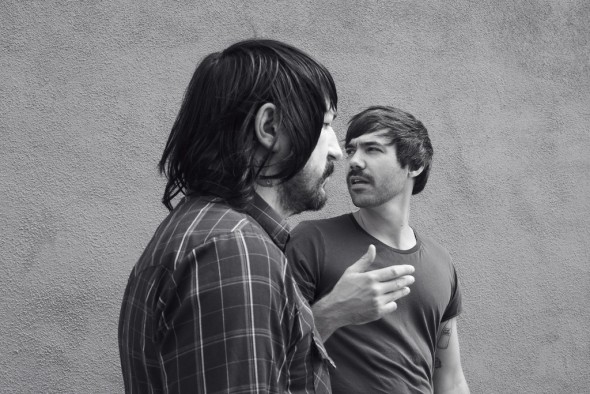 Death From Above 1979 Photograph by Pamela Littky

NAM: What’s your favorite way to unwind after rocketing through a tour like this?

SG: It’s great to go back to LA now, you know that’s been my home for two and a half years, and it’s a great place to go back to because it’s just so consistent. Usually it involves some kind of delicious meal with my wife and some kind of activity with our dog, Cola. My wife is in Europe right now and Cola is with me, so my usual post-tour stuff is kind of flying out the window. I’ll have to figure something out. Cola’s been with us for five weeks on tour. She sleeps curled up at the bottom of my bunk, and she’s a German Pointer so she’s a very active dog. Luckily, we’re playing these outdoor amphitheater type venues so she can chill outside while we play.

NAM: You performed on the Samsung Stage at Lollapalooze just 20 hours after Paul McCartney and just 4 hours before Metallica. Did sharing this musical platform represent a pinnacle in the career of the band?

SG: I’m the kind of guy that’s not ever impressed with things, so I was more excited about the order of things than the other performers. The cohesion of us, then Tame Impala, and then Metallica on the same stage makes you think about what these three bands have in common. Where’s the overlap?

NAM: The direct-to-acetate Blue Room performance will take place a full month after your tour is over. Will there be songs or features on this album that can’t be found anywhere else?

SG: This show’s gonna’ be a month after our last show, so I doubt we’ll have any time to put any surprises together. I was actually more excited after the show got postponed because we’re razor-tight busy right now, and I think the recording’s going to be the best it can actually be, as opposed to doing it right on top of the tour.

NAM: Are you guys working on anything new in the studio?

SG: Wasn’t it so much more exciting to not know if we were ever going to make a record again?

DFA 1979 is set to play The Blue Room at Third Man Records on September 30.