The Arts Company through October 29

Artist Mandy Rogers Horton found a revelation in the aspirational images of Restoration Hardware catalogues and shelter magazines. And through this glossy detritus of our lives, she has spun a new art style of conceptual collage art.

“I just opened up a magazine and painted on top of a picture, like another form of sketching,” she says. “Then there were a few that I started to think were kind of interesting looking.” 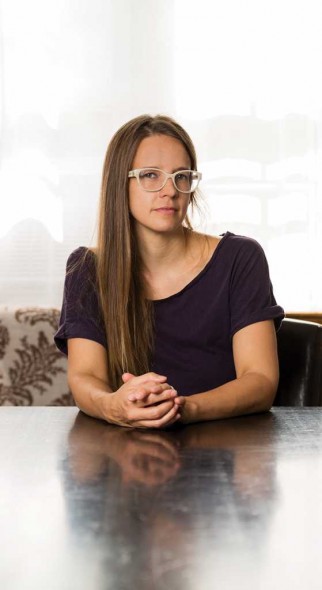 Horton initially demurred at the process; it seemed pedestrian compared to the oil paintings she had long produced. So she tried to elevate the concept by painting in oil realistically, then topping those works with expressionistic paintings.

“They never felt more interesting than these small paintings on magazine paper,” she says. “So I decided to stick with it, even if it seemed a bit silly or nontraditional at first.”

Ultimately, super-sized mixed-media works emerged featuring scads of chairs, windows, chandeliers, picture frames, and more. Horton’s process has now come to involve layering and pasting the cutout images onto wood panels and sanding portions off, as well as adding paint. Through this method, she loses the predictability of what images will adhere and appear distinct and which images will appear ghostly. 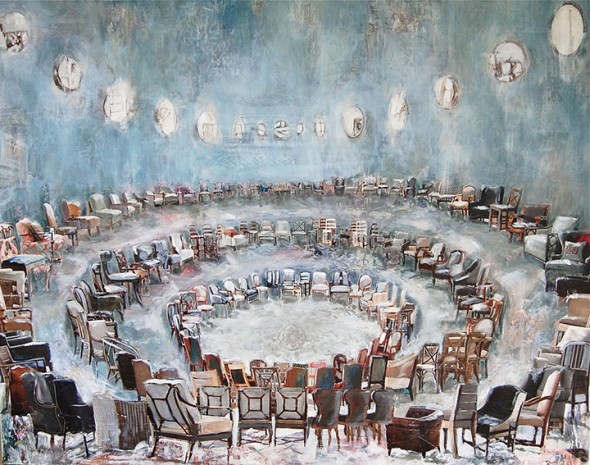 In using catalogues and magazines, Horton creates a juxtaposition: machine-made photography topped by handmade painting. The printed medium—meant to be slick and crisp—becomes visceral and textural in her hands.

Horton joins a century-long line of collage artists that were among the various experimental players in the American and European interwar art scene of the 1920s. Artists Joseph Cornell, Joan Miró, and Kurt Schwitters invented their own collage styles in the wake of Georges Braque and Pablo Picasso, who introduced collage as a modern art form in the early twentieth century. Yet unlike oil paint or marble—time-tested mediums that occupy the thinnest air of the art stratosphere—collage retains a folksy brand identity. Horton readily acknowledges that perception when discussing the catalogues and magazines she uses.

“They’re lowbrow, very ubiquitous,” she says. “There’s something nice about taking this junk mail that’s been sent to you to convince you what to buy, or what your house should look like, and then subverting it to your own will.” Horton points out that these print vehicles use terms that make furniture sound bespoke, such as “hand varnished,” when in fact they’re selling hundreds of thousands of mass-produced objects. 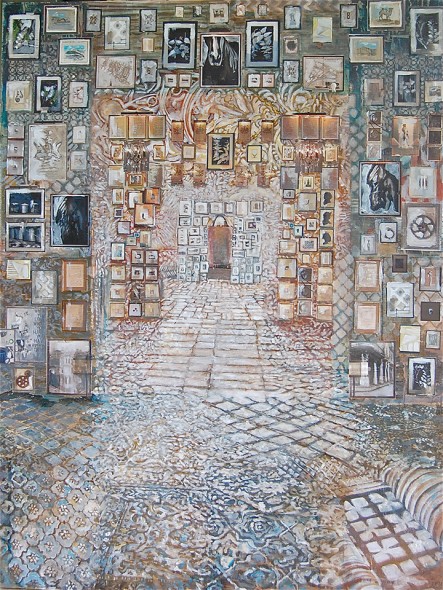 “Catalogues and magazines are always trying to convince us of the uniqueness of their products—especially furniture magazines,” she says. “If we’re one of 7 billion people and we’re using products that are mass produced and we’re inheriting world views that may be thousands of years old, what makes us individuals? I don’t have an answer for that, but I think the way we put those together makes us individuals. The way that you combine those objects becomes unique, even if the objects themselves aren’t entirely new.”

But what makes idea and object fit together in a way that is beautiful rather than monstrous? That is a question Horton posed with her most recent show, Patchwork and Frankenstein, which was hosted by The Arts Company. Her works from that exhibit answer that question symbolically: From a distance, they seem to feature well-appointed, harmonious rooms. But upon closer examination, the items of décor aren’t in perspective, or the scale is off, or patterns that seemed to blend are, in fact, harsh.

“I think the work is about that balance of when these sources come together beautifully or when they resist each other,” Horton says. “We all feel cozy with a patchwork quilt, but Frankenstein? Nobody feels cozy about this monster.”

Mandy Rogers Horton will exhibit her latest art at The Arts Company October 3 through 29. For more information visit www.theartscompany.com or www.mandyrogershorton.com. 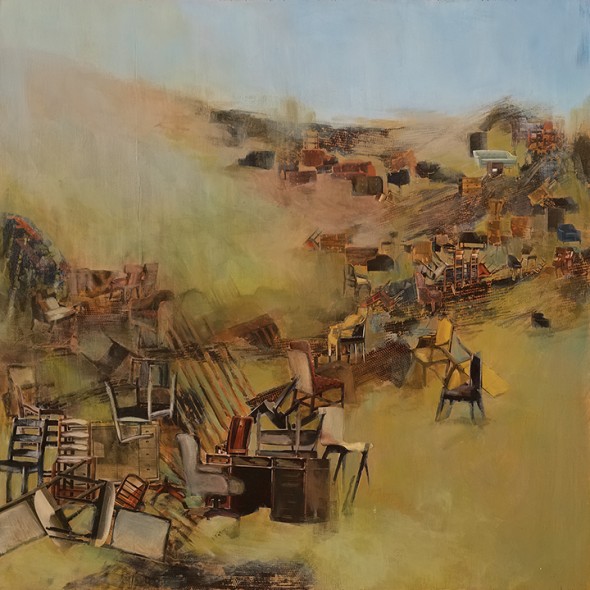