In his criticism of quantum mechanics, Albert Einstein coined the phrase “spooky action at a distance” to deride the mathematical paradox of quantum entanglement, which finds subatomic particles connected by something that might look like super telepathy to an outside observer. Things get spooky when things get small, and the empty spaces contained by Andy Harding’s Ghost Structures haunt Belmont University’s Leu Art Gallery this fall.

All the sculptures in the show are made of reclaimed pine that Harding ripped into sticks that are roughly 2”x 2” before assembling abstract forms that look like tangles of triangles. Some are mounted on the walls, but most are scattered across the gallery floor. The numbered works vary in shape and size, but they’re all variations of random-seeming, organic constructions that effectively evoke the uncertain probabilities of electron clouds. 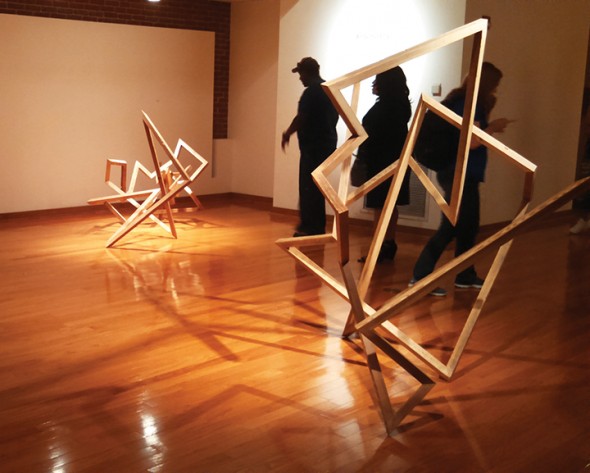 Bridging the gap between general relativity and quantum field theory would unite our understanding of the most vast with our knowledge of the most minute, resulting in the so-called Theory of Everything. Andy Harding’s structures can actually be seen as cosmic or atomic or even metaphysical—à la the exhibition’s title—as disembodied souls returned to pure energy.

Harding earned a bachelor’s degree in chemistry at Belmont, and his creative examinations of scientific themes claim a unique space in the city’s art scene. Harding showed work at Tinney Contemporary a year ago. That small show of wall sculptures and drawings was very strong, but this sprawling new exhibition allows the artist to realize the kind of visual sweep and conceptual reach that those displays could only point at. This exhibition marks a major accomplishment for Harding as well as for the 2015 art calendar where Ghost Structures is one of the year’s best.