An Enjoyable, if Uneven, Turandot Opens the Nashville Opera

The Nashville opera opened its 35th season on October 8 and 10 with a performance of Giacomo Puccini’s warhorse Turandot at the TPAC. This production revived the massive, and beautiful, dragon set that had previously appeared in Nashville during 2001 and 2006. While not perfect, the evening featured Puccini at his best, with all the violence and beautiful music that one could stand. 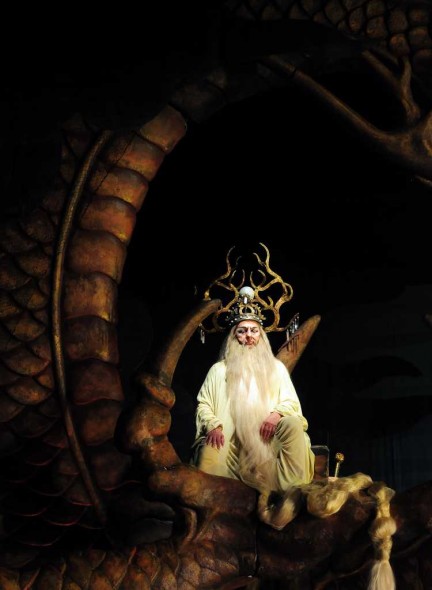 One might have expected to see Turandot again this season, John Hoomes had stated in 2006 that its “typical turn in the rotation is every seven to ten years,” yet there are many aspects of this production that seemed quite fresh, despite the dusty confetti. For instance, the masked ensemble, Ping (baritone Wes Mason), Pang (tenor Jonathan Blalock), and Pong (tenor Ian McEuen) brought the voices and physical humor required to make their character’s politically incorrect humor ridiculously funny. Amy Tate Williams’ choruses were also remarkably well prepared to act as well as sing. From fleeing the guards’ whips to calling for the blood of the Prince of Persia, Williams clearly understood how Puccini’s choruses are meant to heighten the drama, adding the violent, verismo aspects to this fairytale.

However, Turandot is also to some extent a singer’s opera, featuring two of the most famous and difficult bel canto roles in opera. As Caláf, tenor Jonathan Burton was also refreshing. His voice, while not incredibly strong, did ring heroic even as it proved to be tender and intimate enough to lend his character a nice warmth. His impressive third act Aria “Nessun dorma” attracted a well-earned applause from the room. Soprano Othalie Graham as Princess Turandot brought a huge instrument to her role but unfortunately she often seemed to have trouble with the quieter moments. She began her big aria “In questa reggia” a little too loudly and in her duet with Caláf she simply over-powered Burton’s tenor.

Ultimately, it is on the role of the slave girl Liù, here played by soprano Danielle Pastin, that the success of the entire production relied. As the object of the crowd’s blood lust, the focus of Caláf’s neglect and the victim of the Princess’ bloody petulance, Liù links the work’s verismo with its romanticism and her character must be thoroughly humanized to be tragic. Towards this, Pastin’s portrayal of Liù was endearing; her voice was amazingly supple with a purity that reflected her character’s naiveté. Her brutal and heart wrenching suicide (the audience audibly gasped) was made even worse as her lifeless body was followed offstage by Calàf’s blind father Timur in a fearful ignorance (wonderfully played by bass Benjamin Leclair). It really is remarkable that this, the last music that Puccini wrote, is also possibly his most powerful.

Conductor Joseph Mechavich handled Puccini’s massive blocks of instrumentation with a nuanced subtlety. Special mention goes to the brass section and particularly the bandas (trombone, trumpet) for their stirring annunciations of royalty. Sondra Nottingham also deserves note for the masks, as does Pam Lisenby for the wonderful costumes, although one wonders if the costumes worn by the Executioner’s Assistants might have been just a little too “brief.”

Puccini’s work is of course problematic and unsettling. The conundrum lies in the fact that the more that the tragedy of Liù’s character is emphasized, the less human Calàf and Turandot appear. No closing duet, even one sung perfectly well and written by Puccini himself, would provide an adequate redemption for either Turandot’s bloodlust or Caláf’s narcissistic ignorance. But at least we have the music.