Internationally renowned sculptor John Henry will be exhibiting at Cumberland Gallery along with Nashville’s iconic painter Barry Buxkamper through December 24.

Henry, known for his large-scale steel constructions, has sculptures in major collections and sculpture parks throughout the world. The scale of his work ranges from just a few feet in height to one hundred feet or more. For this exhibition, he will be showing smaller tabletop-sized sculptures, some unique and some from small editions. 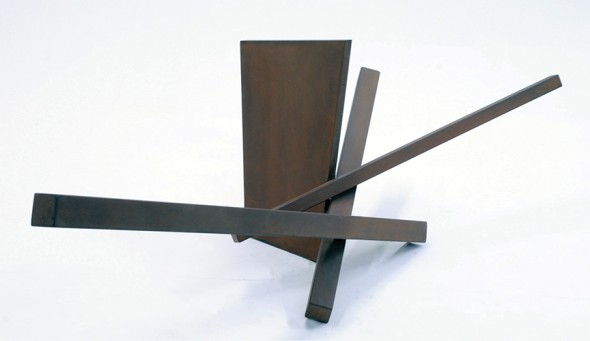 While most sculptures in the show reflect their true size, several of the pieces are maquettes for larger, more monumental works. Mr. Henry has an uncompromising eye when it comes to knowing which forms will be successful at a certain scale and which will not. The pieces he has selected for this show highlight his experience in recognizing these formal relationships and the possibilities within monumental art construction.

Compositionally elegant and visually balanced, each piece is a collection of lines and planes that work together to form a dynamic relationship with the space around them. Of particular note in these works is the seamless joinery that is a trademark of Mr. Henry’s more recent sculptures. Even his large-scale works have a system of construction that hides connections and bolts, allowing the viewer to focus on the form rather than the vagaries of construction.

One remarkable thing about the small works is that even though one can see the whole sculpture, one is still compelled to walk around each piece in order to see the relationships among the various lines and forms. I have always thought that one basic test of a successful pedestal piece is whether or not the viewer feels compelled to walk around to the other side—and these sculptures have the presence and energy to do just that. 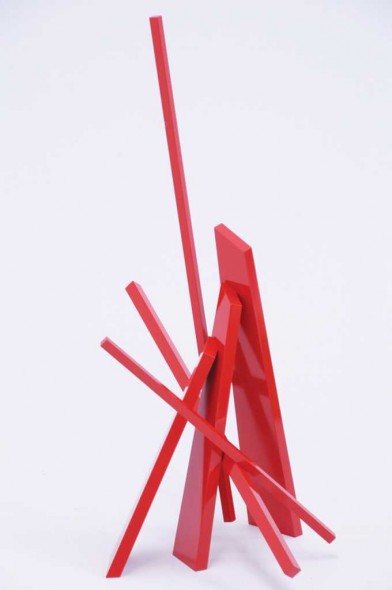 Often people describe Henry’s work as an extension of Constructivism or more recently, Abstract Expressionism. Certainly, the architectural size and clean metal lines of his sculptures are Constructivist in spirit. Similarly, like many Abstract Expressionist works, his sculptures have a spontaneous quality and are also highly planned out and meticulously constructed. However, when asked about his work, John Henry talks less about being a sculptor and more about being a builder, a term he first heard used in this context by outsider artist Herman Rusch. Mr. Henry likens the builder terminology to those artists who use intuition and inner vision rather than literary vocabulary and references. He states, “Years ago cultures had a visual language and understood it. Now, though, we are out of practice and are still trying to understand. We have the need for language as a reference rather than experience as a reference. Art is not necessarily for immediate communication, but the experience of learning experience itself.” As one can see in this show, his visual language communicates form and space to the viewer in a complex yet very accessible way. Mr. Henry’s intuition about line, form, and materials for the last forty years has placed him firmly atop the pantheon of structural steel sculpture making.

Barry Buxkamper, one of Nashville’s premier painters, will also be showing at Cumberland Gallery. He will be exhibiting new paintings from several bodies of work, including his Wobble series, among others. Buxkamper’s work combines the mastery of technique with mystical inventions within his autobiographical oeuvre to arrive at beautifully imagined scenarios and painted constructions. 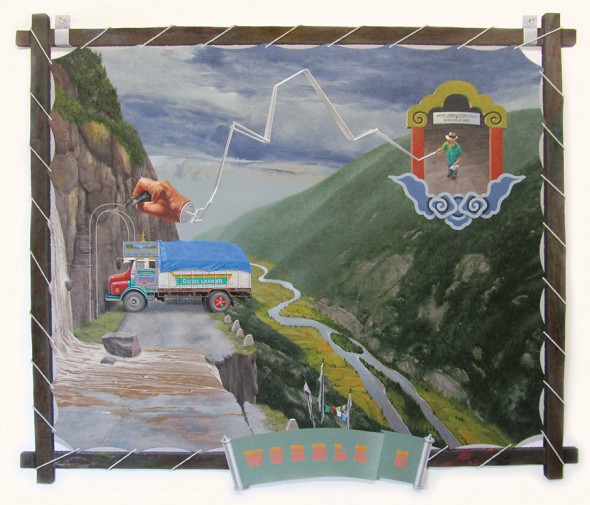 Buxkamper’s work is deeply steeped in humor while retaining a certain vibrant darkness. On the surface, his work is often humorous and lighthearted, but at the same time, it can hint at the dangerous and be quite serious. For example, in Medical Center he uses surreal or almost cartoonish scenarios to speak about the experience of his late wife, Margret’s, battle with cancer. The composition includes a hospital, lightning, alligators, rats, and a blender all within the context of a medical care situation. The juxtaposition of characters and elements becomes a surreal comedy on one hand, but it sums up perfectly the absurdity, pain, and helplessness that one feels as a participant in that level of the medical abyss. His paintings walk a fine line between playful overtones and sinister undertones, while never appearing fanciful or overbearing. These works by Mr. Buxkamper are serious, but they are not grim. 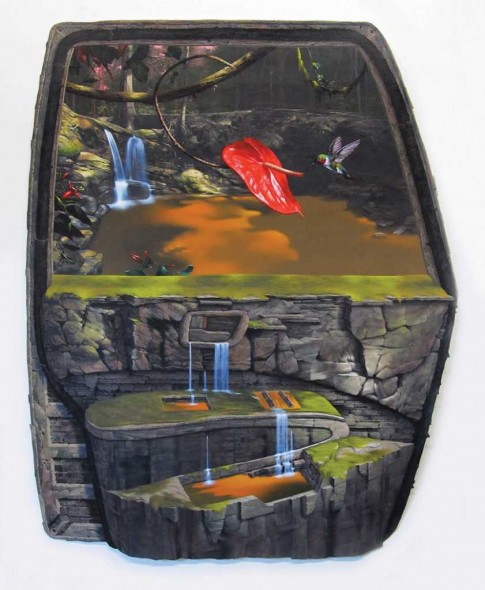 Some of his paintings seem just on the edge of disaster, but certainly have hope just around the corner. As Mr. Buxkamper says, “There is drama on the horizon” in these works. In one from his Wobble series, Buxkamper paints about a harrowing personal experience on a mountain road in Bhutan. He appears within the composition of a mountain road scene, where the road has washed away and a truck is in danger of falling off the precipice. With the help of a hummingbird in his hand, the self-portrait in the composition paints the beginnings of a tunnel for the truck to escape off the mountain. This clever wit and curious use of the self in Mr. Buxkamper’s work gives fresh life to the discipline of painting in an oftentimes cynical contemporary art climate.

In another series, Mr. Buxkamper paints outdoor scenery as if viewed from the interior of a car. In each painting, one sees the inside of the car door and the adjacent natural scene out the car’s window. The doors are painted to resemble different materials such as wood and stone. As Mr. Buxkamper explains, “It’s a continuing theme in my work: nature made and non-nature made.” More pointedly, he says, “Nature occurs in a car for most people.”  These are perhaps not as autobiographically specific as some of his other paintings as they recall the ubiquitous suburban vacation that many have experienced, but they are relatable to many people. The surreal treatment of materials depicted and the landscapes that he chooses to include provide humor while also commenting on the state of our modern car-centric society. 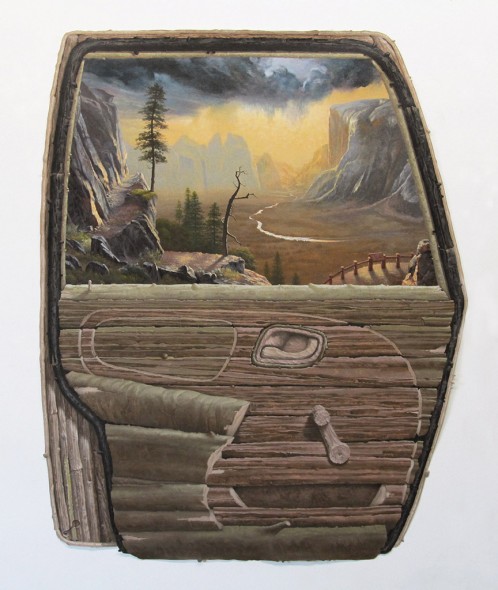 Both exhibitions at Cumberland Gallery of John Henry and Barry Buxkamper showcase two Tennessee artists at the top of their craft. Though differing in approach, the beautifully rendered forms, vivid imaginations, and the attention to detail from each artist cannot be overstated.