Breakfast at the Schermerhorn with Coffee & Classics Series

Friday mornings may seem like an unusual time for a concert. After all, it’s nighttime when downtown Nashville comes alive with music lovers seeking out every possible genre, from classic country to classical masterworks. But for the Nashville Symphony, Friday mornings have opened up a perfect opportunity to develop a unique programming niche that gives individuals the chance to enjoy a stirring classical performance in a completely different way.

The Symphony’s Coffee & Classics series, taking place at 10:30 a.m. on Friday mornings, offers all the pageantry of a performance by the GRAMMY®-winning orchestra in a relaxed, casual setting. Introduced in 2013, the series has quickly become a huge hit with Nashville audiences.

“Initially we saw these shows as a way to bring back subscribers and patrons who, for whatever reason, could no longer attend concerts here at night, but they have since evolved into an important part of our annual programming,” says Larry Tucker, the Symphony’s vice president of artistic administration. 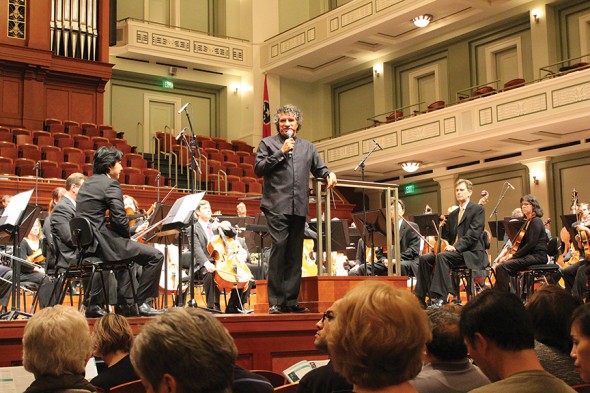 Modeled around similar programs at other orchestras, the Coffee & Classics concerts showcase one or two classic pieces of repertoire, with past seasons having featured everything from Beethoven and Mozart to Saint-Saëns and Copland. Tickets start at only $25 including fees, offering tremendous value, and coffee and pastries are provided in the main lobby prior to each show as well, creating a social and festive atmosphere for concertgoers.

In addition, attendees are also treated to a pre-concert lecture by the concert’s conductor from the stage. Informative and entertaining, the informal talks can include anything from humorous anecdotes about the composer to tips on what to listen for in the piece. These lectures strengthen the connection between the audience and the orchestra, as well as the piece of music, and are a favorite among Coffee & Classics regulars.

Though still relatively new, the Coffee & Classics Series has proven very successful. Ticket sales in the second year increased by 126 percent, and interest in the performances continues to grow as they attract an increasingly diverse audience.

“It’s exciting to see the crowds for these concerts evolving beyond the original target demographic,” says Emily Shannon, Nashville Symphony director of ticket services. “Young professionals, parents with children, and even college students are all taking advantage of the distinctive opportunity to hear our orchestra on Friday mornings.”

There are three more chances to experience these unique concerts yourself during the 2015/16 season:

Learn more about the Symphony’s Coffee & Classics Series, including ticket discounts for groups, at www.nashvillesymphony.org.