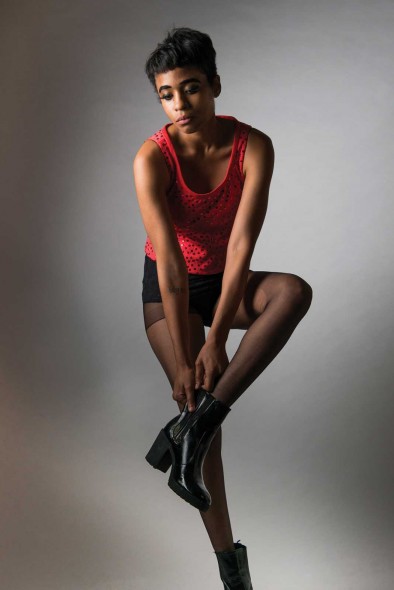 ADIA VICTORIA is a songwriter and performer living in Nashville, Tennessee. With the release of only three songs—“Stuck in the South,” “Howlin’ Shame,” and “Sea of Sand”—critics are scrambling to find categories and descriptions. Blues? Rock and roll? Americana/folk? Afro punk? hey, just sit down, shut up, and listen!

There is a woman I want you to know and keep in your orbit. Adia Victoria. I had a conversation with her recently. I sat across the table from this complexly beautiful songwriter and performer thinking, I want you to know her, I want my girls to know her. Selfish? Yes. A ridiculous amount of pressure to put on someone you’ve just met? Yes. But I think she understands and is generously readying herself to be a part of our path. Not only ours, but she’s putting herself in a line of women who stand with, for, and often in spite of one another.

I know there will be times when I need a song. More than a song, a singer, a voice with an emotional range that makes us feel, fear, and embrace our humanity. Here, my dears, meet Adia Victoria –

SPG: Toilet paper over or under?

AV: Whichever way my sister puts it on. I’m the person who leaves it off the hook.

AV: A shot of whiskey first, then a glass of wine. 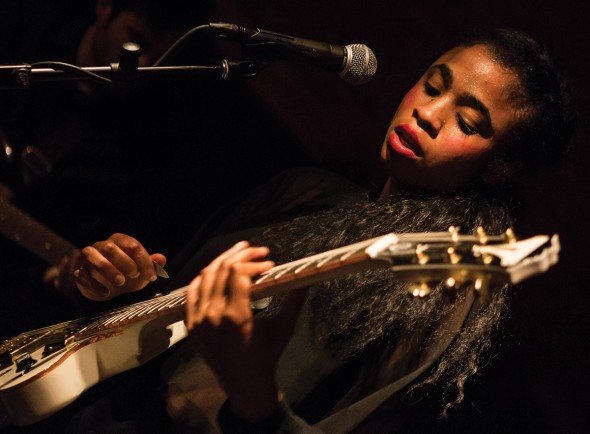 AV: South Carolina. It’s where I’m from. It’s me. Every time I go back now, I see I’m a woman who is more confident, and I can appreciate the place a lot more. I used to take it so personally. That place hurt me, but I’m more comfortable in my skin now.

I moved to New York when I was 19. I was restless and delusional. I grew up watching all the movies where a small town kid with ambition goes to New York and makes it! My mom was looking at me saying, what are you gonna do; you just dropped out of high school? I wanted to see and experience things. So I did. I worked retail jobs and did some underage clubbing. I was mostly just a silent observer.

Moving from Atlanta to Tennessee happened at a time that I was ready to reset. Nashville has given me a safe spot to transition from girl to woman. I like that there aren’t people out for my blood here. I feel anonymous in a beautiful way.

Wherever I am, I’m going to stir up the status quo, reminding people that there are little black girls who are quiet on the bus but have tremendous stories to tell. We will speak up. I’m just following in the tradition of women singing their truth, playing the blues, speaking to power, and challenging the outside gaze.

SPG: Who is in that tradition for you?

AV: Victoria Spivey, Alberta Hunter, Bessie Smith, Ma Rainey, Jill Scott, Lauryn Hill. I’m in the path of black women who don’t subscribe to the monolithic myth. We live in a white dominated society that often chooses to gloss over us and appropriate our genius. You can’t tell me that what I’m doing . . . We invented the blues. We invented rock and roll. When I get questions like, how did you come to play guitar or play this type of music . . . come on! This is my heritage, my culture. This is my birthright. Rock and Roll and the Blues were appropriated from us. Just because you think Stevie Ray Vaughn is the original . . . Look, it’s just not true. I’m going to challenge that.

SPG: Several of your songs discuss location-based circumstances and ideas of being stuck, or choosing to stay, or possibly escaping. I find myself thinking about James Baldwin moving to Paris in listening to your music and talking with you now. What does place mean for you?

AV: Yes! James Baldwin in Paris, Ta-Nehisi Coates moved to Paris. First, I should preface this by saying that a lot of these songs were written from the perspective of a 17-year-old who had never lived anywhere but South Carolina. There was a feeling of stagnation and suffocation. I had no core sense of self to draw from as a young girl. . . .

I had the idea of paradise, and I needed to find it. I figured if I moved, then my troubles would stay put. I needed to be somewhere other than where I was. But I’m still me wherever I am. I went to Paris the first time when I was 18. I saved my money. I knew no one there. My family had never been anywhere in Europe. I found that I was more me when I went to these places. All of my particulars, they came out when I was alone and severed from familiarity. I had to get to know myself outside of places that I thought defined me. I asked myself: Who are you independent of being grouchy about the South, complaining about the South. Okay, the South isn’t here with you, so who are you now? Traveling has caused me to go in and find that core. I don’t want to trick myself into thinking there is an idyllic place for me. I’ve spent so much time in my life fighting against my surroundings. So where do you go when the fight is no longer there? It’s this stripping away of false personhood, false identity. You’re vulnerable when you travel. You don’t know anything, anyone. You can’t go on autopilot. You have to be so conscious and so aware in the moment.

SPG: You were soaking up experience and life.

AV: I’m reading this book I got from the library, Acts of Literature by Jacques Derrida. He asks what you’re trying to share as a writer. Can you actually share anything and really get it across. I’ll often sit down and question myself and what I’m writing. It needs to be important, you know. Something epic. Something worth people’s time. But that’s not the way to approach the page. We’re not all leading these epic lives. It’s my life, my story. It’s the minute things that are often the most poignant. People can relate to that. The epic is in the ordinary sometimes.

SPG: So what’s your writing engine? What drives you?

AV: This obsession with being known. I came up in such a strict Seventh Day Adventist household where there were so many rules. I felt stifled and scared of my own humanity. Everything counted towards going to heaven or going to hell. I filtered everything through those choices. So I ended up doing nothing. I just stayed silent and still. God can’t hate me if I don’t do anything. As a teenager though, I kinda went insane and couldn’t contain my soul. I started shooting outward. Writing has allowed me to capture these things and reflect upon them so I’m not always reacting. To look at myself and examine myself. I want to get to know myself as a human. I’m interviewing myself, getting to know myself through my writing. I want to be known, by my own self.

SPG: Are there things that scare you about yourself?

AV: Sometimes I feel like I can be out of my own reach. I can be closed off from myself. When I’m learning new things, like something with the guitar or writing. Sometimes I’ll censor myself because I’m afraid of what I’ll find. Even if part of me knows it can be good, part of me says, well, then what? What will the next step feel like? I just don’t know what it will lead to. I can have this inclination to want to get to the end, but if I can’t see it, I might not . . . Maybe it’s all connected to my upbringing. There was this pressure to always think about the end, Jesus coming back. And your whole life was just in preparation for this big moment, and then the end. So it’s hard for me to appreciate the things in the middle, the process. I get scared of the process. I just want the end, know how things are going to turn out. Sometimes that just cripples me.

“When I get questions like, how did you come to play guitar or play this type of music… come on! This is my heritage, my culture. This is my birthright.” 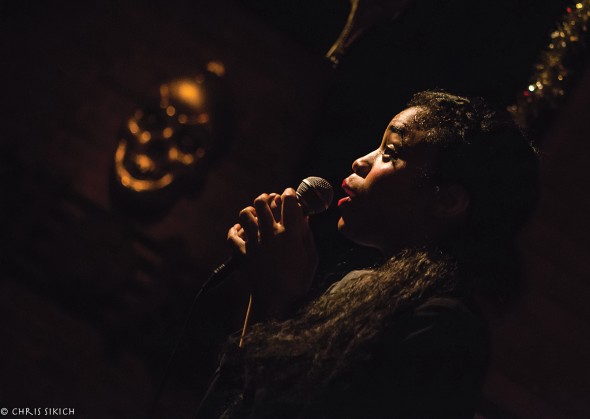 SPG: Tell me about your work right now. Many people would say you’ve been paying your Nashville dues. How do you refer to your work and jobs?

AV: I’ve waited tables at Union Station, tended bar at Bridgestone Arena, worked at Puckett’s, and Adele’s. (I got fired because I wasn’t bougie enough.) Now I wait tables at the Broken Egg. Those are my jobs; writing and performing are my career. But really, I value my day jobs a lot more than before. I need to do this so that I can do this. If I’m not making money there, then I can’t pay my bills; I can’t pay my band. I can’t go on tour. I get in these articles in Vogue or Rolling Stone; I go tell my dad about it. He’s this very pragmatic West Indian man. And I’m like, I was in Vogue, and he’s immediately like, Did you get paid? Call me when you get paid.

SPG: What about the idea that an artist’s work improves through struggle?

AV: I don’t want to live in lack. I grew up with that. I grew up with a mom who worked hard, but there was never enough. I saw what that did to her. I don’t want to do that. She doesn’t want me to do that. There’s no honor in that. . . . Last year I read Incidents in the Life of a Slave Girl by Harriet Ann Jacobs. I learned a lot about self-preservation and determination. She lived seven years in a crawl space in order to get away from her master but still be near her children. She lived there. Her body atrophied. She shrank. She shrank herself to attain her goal. I learned so much about getting beyond danger and past demons, those things that eat at you and seek to destroy you. So I wrote this album as a memorial to my twenties. Those are tender years for a lot of women where it hurts. You get busted up in love and life. You make a lot of mistakes. You meet a lot of people who do you dirty because you don’t understand your value yet as a woman. That’s so reinforced in our society to belittle us and dwindle us down, take our power away. So I wanted this album to be a testimony to what happens when you lose faith and lose sight of the prize. And also what happens when you remember who you are and your lineage of survivors. So that’s all wrapped up in it. I’m looking towards a release date in early 2016. I’m ready. I’m ready for that release.

For more information about Adia Victoria and her upcoming album, visit www.facebook.com/adiavictoria.