In 1949, Hugo Blomberg, Ralph Lysell, and Gösta Thames were assigned by their employer, L.M. Ericsson of Sweden, to design a next-generation telephone. Their task was to create something completely different from the iconic communication standard of the time, that tabletop, two-piece, cord-connected heavy black box, the Bell System’s Model 302.

L.M. Ericsson wanted their phone to be one that would take advantage of recent fabrication advances; the availability of component materials of reduced size and weight. The team’s result: the one-piece Ericofon, introduced in Sweden in 1954.

The phone was initially marketed to institutions, particularly hospitals, which installed them in the rooms of bedridden patients, with the idea that it would be possible for patients to communicate unassisted, using a one-piece phone rather than the old traditional, two-piece, corded model. 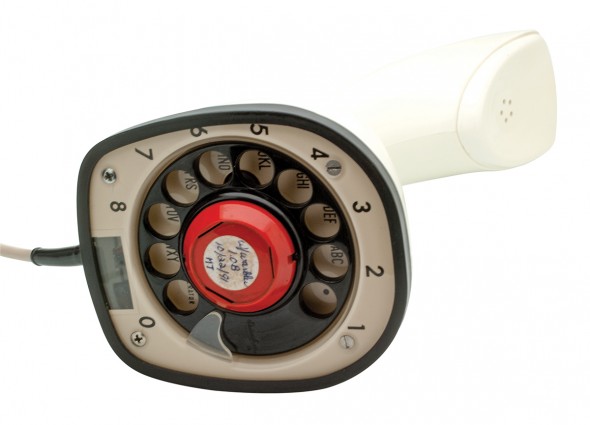 In 1961, sales of the Ericofon in the U.S. exceeded producti Fwd: Sperry’s Florence updated wine list on capacity by 500 percent, so Ericsson bought out its American distributor and transferred the manufacture of U.S. Ericofons to that company’s headquarters in Ohio. Along with the move, Ericsson reduced the color offering from eighteen to eight, and the shape of the phone itself was made shorter. Of these changes, it was later determined that the reduction of the receiver height made the phone awkward and interfered with sound quality, so the original height was restored. For collectors, this makes height specifications an important detail; 213.5 mm is the determining height for that short-term product change designated “old case” or “new case” Ericofon.

All the Ericofon Model 52s in the U.S. featured rotary dials in their bases; however, in 1967, Ericsson introduced the Ericofon 60A with a push-button, TouchTone pad. Something which should have been in keeping with the high-tech, space-age look of the Ericofon instead caused the phones to break easily, and by 1972 North Electric stopped making Ericofons in the U.S. entirely. In Sweden, a new Ericofon, the 700, was introduced, for Ericsson’s 100th anniversary in 1976, but the solid-state “Centenary” phone, which came in five colors, never made it to the United States.

In the early 70s, the owner of these examples discovered them in the back of a West Hollywood “junk shop.” Installed in his Beverly Hills home, the Ericofons were to be retrieved later from “four feet of mud.” In their current “reconditioned” state, each phone would have a retail replacement value of $150.

However, after surviving being discarded and a Los Angeles mudslide, what does the future hold for these Ericofons? They are on the brink of the past. New technologies have killed off a whole plethora of electronic gadgets, now adding landline phones to the growing list of endangered species. These artful mid-century survivors may have a little bit more time on their road towards extinction.

Two similar examples are in the permanent collections of New York’s Museum of Modern Art.