James Threalkill’s recent acrylic paintings capture the expressive vitality of jazz musicians in performance. These images are linked to a continuous flow of art produced by Threalkill over the past twenty years that are specifically grounded in the African American cultural experience. Also, these works illustrate the artist’s multi-cultural consciousness because his artwork more broadly reflects his awareness of and sensitivity to the human experience. Threalkill’s appreciation of the human experience is an outgrowth of his role as an artist, teacher, and advocate for racial and cultural diversity. These interests have led to his travels throughout America and to faraway places such as Colombia, South America, and Soweto, South Africa, where he has served as a visiting art instructor, as an artist in residence, and as a participant in art exhibitions. 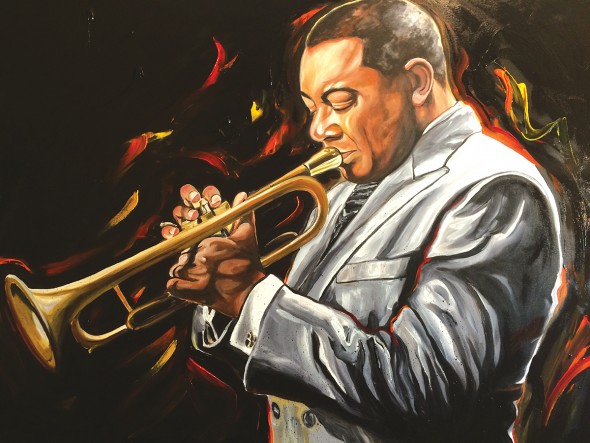 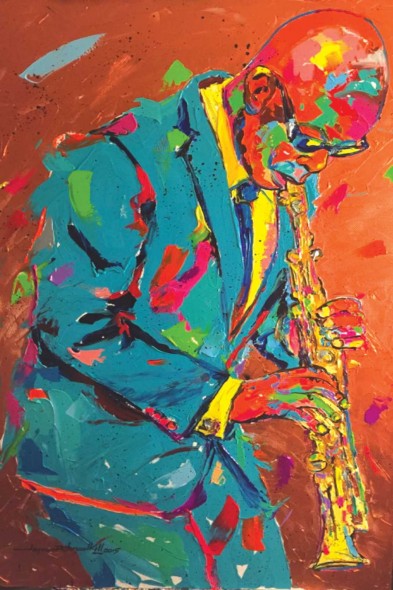 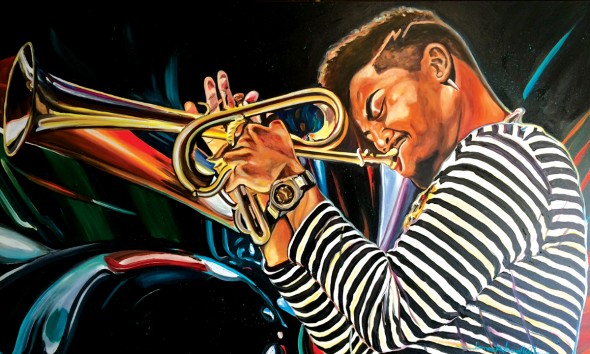 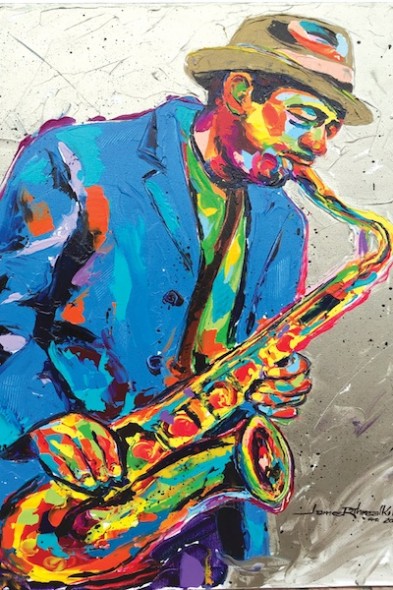 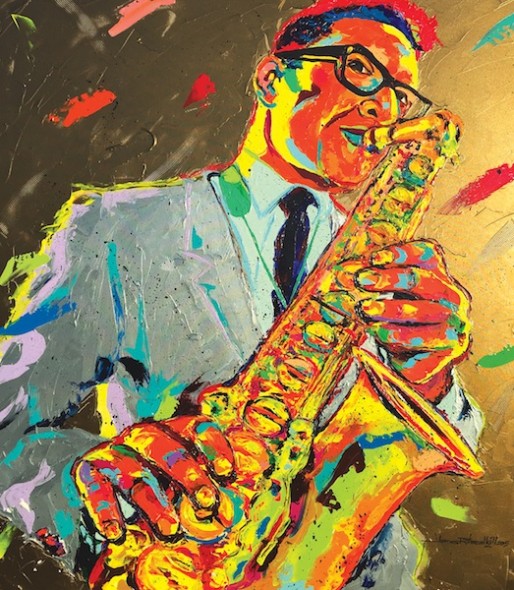 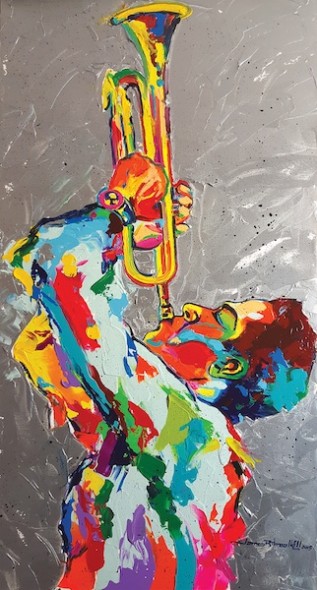 This recent series of jazz-inspired paintings is connected to Threalkill’s formative years while growing up in Nashville. They speak to his creative spirit, which his family and teachers recognized early in his life. Reflecting on his childhood Threalkill said, “I always credit my first grade teacher, Mrs. Stinson at Napier Elementary School, for recognizing my art potential and alerting my mother about my interest in art.” And his sixth grade instructor, Jackie Thomas, according to Threalkill, was “an inspirational teacher and a model of excellence in all walks of life.” At the age of 13, during his middle school days, he received a set of oil paints from his mother. This gift was the catalyst that propelled his passion for creativity and represents (symbolically) a portion of the foundation on which he has built a successful career as a celebrated painter and instructor of art.

Threalkill’s paintings Coltrane Magic, Retro Jazz, and Straight Up Jazz are visually united by the artist’s use of decorative patterns, textural surfaces, and vibrant color combinations. In Coltrane Magic, for instance, the hot oranges, reds, and yellows that appear in the face, hands, and saxophone are in stark contrast to the cool blue and green hues. These colorful passages exemplify Threalkill’s interest in bold design. In concert with these vibrant patterns is the active tactile painting surface—expressively rendered with brushes and painting knives—which is visually connected to the portrayal of a live performance by musical legend John Coltrane. This is a brilliant approach to visual art in that the painting also stylistically corresponds to the musical style of free jazz, which is associated with the musical expressions of Coltrane and Pharoah Sanders, prominent African American saxophonists of the 1960s. Their approach to sound incorporated freely improvised melodies and a reduction in musical structure. During this era both musicians were also known for performing concerts that sometimes included harsh overblowing of the horn resulting in sustained loud sheets of musical screams. Threalkill’s active painting surfaces and vibrant color contrasts allude to aspects of Coltrane’s ‘free’ musical style. For example, the aural phenomenon of the brash screaming horn, I believe, is visible and ‘audible’ in Coltrane Magic as well as in Retro Jazz and Straight Up Jazz.

Threalkill’s appreciation of the human experience is an outgrowth of his role as an artist, teacher and advocate for racial and cultural diversity.

Threalkill also captures the experience of attending a live concert through his compositions Jazz Inferno and Innovative Improvisation. In both, he zooms in on the figure—like a camera—and surrounds the musician with a dark background, which calls to mind the art of the seventeenth-century Dutch painter Rembrandt van Rijn, who is known today for his theatrical application of light and dark values. Threalkill’s depiction of Wynton Marsalis, a contemporary master, in Jazz Inferno is a naturalistic view of this internationally acclaimed trumpeter, composer, and advocate for the appreciation of classical and jazz music as director of Jazz at Lincoln Center in New York City. In preparation for this painting and other works within his jazz series, Threalkill viewed vintage film clips, listened to recorded music, and viewed photographs of traditional and contemporary jazz artists. In addition, he listens to a diverse range of recorded music while painting in his studio and attends live jazz concerts. According to Threalkill, these experiences are necessary and part of his effort to “capture the essence of spontaneous creativity.”

Beyond his embrace of musical figures, Threalkill has stated that he has been influenced by a wide range of visual artists from the past and from recent history. The idea of diversity applies to his artistic influences, which range from the painted and sculpted work of Italian Renaissance master Michelangelo to the work of the nineteenth-century African American artist Henry Ossawa Tanner, who painted religious themes and landscapes in Paris, France. For Threalkill, the magazine illustrations of Norman Rockwell of the twentieth century have influenced his appreciation of realism. And within this circle of prominent artistic masters are the abstract limestone sculptures of Nashville native William Edmondson, who received national acclaim in the 1940s. Threalkill stated that he has been inspired by Edmondson’s forms as well as the sculptor’s “spiritual approach to art.” Close observation of Threalkill’s jazz paintings clearly speaks to the notion of the spiritual as a motivational force within the creative process.