In November, Seed Space’s lecture series “Insight? Outta Sight!” brought Kenneth Bailey, co-founder of Boston’s Design Studio for Social Intervention. Bailey and his team see an intersection between social justice workers and artists. He says the thinking that comes out of the art world—about form, gesture, beauty, and aesthetics—can be brought to bear on solving problems within communities.

When Bailey was just 12 years old, he was already working in his community for tenants’ rights in St. Louis. At 30, when he was doing social-justice consulting and research, he started to notice that when methods didn’t work, organizers were stymied.

“We seemed fixed around the same solutions that we had, and we didn’t have mechanisms with which to innovate solutions and new strategies,” he says.

“Bodies of thinking that come out of art world having to do with form and gesture and beauty and aesthetics that can be brought to bear on how you describe the problem in the first place,” Bailey says. It’s an assets-based approach to problem solving that uses existing social relationships, individual gifts and skills, and untapped local resources.

A huge part of DS4SI’s work is coming up with horizontal strategies that are designed and deployed by the population experiencing the particular social problem. For example, Public Kitchen addressed food justice in public space when members of Boston’s Upham’s Corner worked with a chef and design collective to build and run a mobile kitchen. At the Studio’s Youth2Youth Action Summit in 2012, teens designed three public action projects that constructed symbols that interrupt youth-on-youth violence. 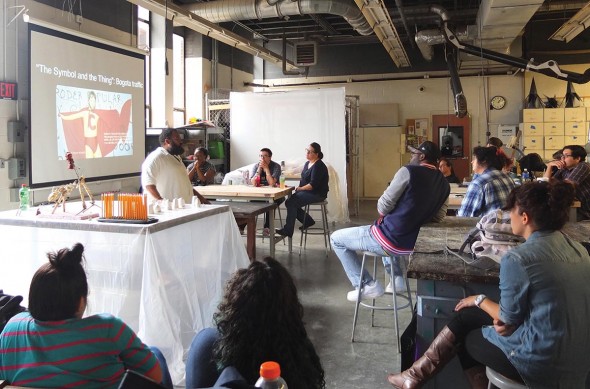 “We want to cut a piece of socially engaged art out and use it as a way to talk about artistic gestures that actually affect people in a way that has a soul change,” Bailey says.

For more information on the Design Studio for Social Intervention, visit www.ds4si.org.