“The copper-plate it [the mezzotint] is done upon, when the artist first takes it into hand, is wrought all over with an edg’d tool, so as to make the print one even black, like night: and his whole work after this, is merely introducing the lights into it; which he does by scraping off the rough grain according to his design, artfully smoothing it most where light is most required . . .”

—William Hogarth, The Analysis of Beauty (1753)

A Mezzotint is an intaglio printmaking process developed in Amsterdam in the mid 1600s, using a copper plate which has been worked (grounded) using a semi-circular fine-toothed tool (rocker) so that the entire surface is roughened. In this state, when inked the plate will print solid black. The design is then created by scraping down and polishing areas of the plate, thus holding less ink and printing more lightly than the unpolished areas. Since a mezzotint plate is particularly prone to wear during printing, the earliest impressions are the finest, very dark with strong definition, whereas later ones are noticeably fainter.

The mezzotint print found its most appreciative audience in Great Britain, reaching its peak of popularity during the 18th and 19th centuries. While printmakers throughout history created original compositions and gained fame in their own right, some teamed up with painters to reproduce their works in great numbers for broad distribution. Such was the relationship between British printmakers Valentine Green and Richard Earlom, who achieved fame for their mezzotints after the paintings of Gainsborough and Reynolds. These prints were often the only means most people of the time had to become acquainted with paintings by major artists, and the mezzotint’s distinctive use of tone (rather than line), capacity to convey texture, and strong contrasts between light and dark suited the painting style of 18th century British art.

Mezzotint printing was practiced all over Europe and even made its way to Colonial America, but by the late 18th century this print technique lost its audience to other processes. In the centuries to follow, this technically demanding art form would be revived, for some only in short spurts, by a few 19th- and 20th-century artists, to include Sir Frank Short, Chuck Close, Georges Rouault, Yozo Hamaguchi, and Mario Avati. 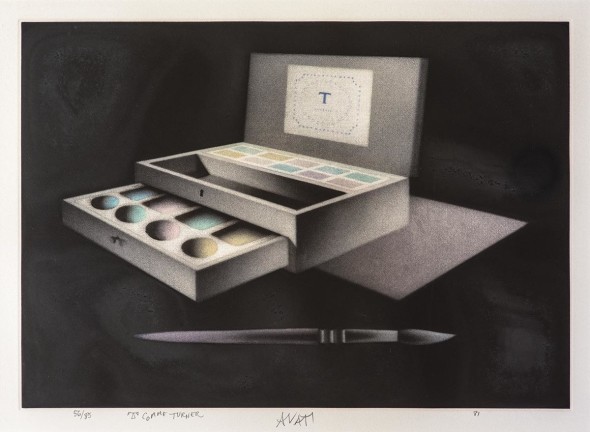 Born in Monaco to Italian parents, Avati attended the École des Beaux Arts in Paris and studied with Marc Chagall. He began printmaking in earnest in the late 1940s, and about ten years later began to focus on mezzotint, printing exclusively in black from 1957, then adding color starting in 1960, experimenting with and mastering techniques that brought him significant international recognition and placed him at the forefront of his discipline. His works are represented in more than 100 public collections, including the Victoria and Albert Museum, the Uffizi, and Washington, D.C.’s National Gallery. Mario Avati lived and worked in Paris, and he died there on February 26, 2009.

This masterfully executed mezzotint, which was purchased for the total cost of $90 with shipping from an Internet auction site, would, in my opinion, have a replacement cost of $800 to $900.