It all started January 29 in a concert by the Nashville Symphony at Schermerhorn, where Silvestre Revueltas’s Sensemayá was a highlight in a program predominantly devoted to film music. The piece is quite reminiscent of Igor Stravinsky’s primitivism and features a rhythm that Revueltas derived from an Afro-Cuban chant, deploying it in intense and largely unusual meters. These are set against an interesting orchestration, quite heavy on the brass, suggesting a primal Mayan civilization. In their performance, the NSO’s brass performed admirably, bringing much excitement to the score.

Having acquired a beachhead at the center of Music City’s classical culture, the Mexican artistic invasion continued across town at Casa Azafrán, with Intersection’s second concert of the season, titled Mariachi–A Family Concert. This concert featured compositions from two 20th-century Mexican composers, Revueltas’s Homenaje a Federico García Lorca and Carlos Sanchez-Gutierrez’s M.E. in Memoriam, as well as a Mariachi-inspired premiere from contemporary composer Cristina Spinei titled New Work (2016). Between these performances were bi-lingual introductions to Mexican culture and Mariachi music presented by the vibrant Mariachi Internacional de Glencliff H.S. and its director, Gabriela Fuentes. 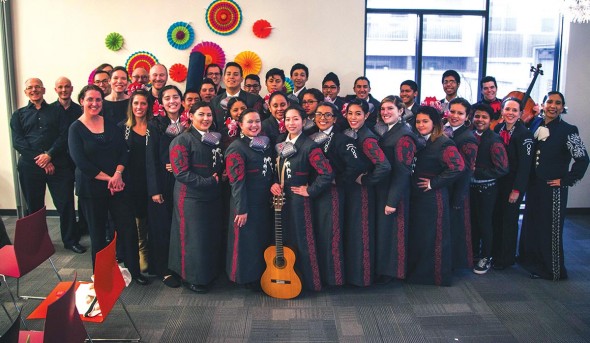 Intersection’s family concert format is fun. The instrument workshops, speaking instruments (petulant violins and introverted oboes), and all the children in the audience make for an enjoyable and refreshing concert experience. In performance, the Revueltas, especially in the faster, outer movements, was brought off very well. The slower inner movement, however, with its mournful trumpet melody, required the patience of a parent. It was difficult to tune out the distractions of the youthful audience in order to hear this beautiful but rarely performed masterpiece—this was, after all, a family concert. Speaking of families, father and son trumpeters Jeff and Preston Bailey (a Nashville institution) deserve special mention for their performance here and the night before at the Schermerhorn.

The highlight for the audience, apart from the absolutely marvelous “La Bamba” and the lyrical and beautiful “El Rey” performed by the Mariachi Internacional, was Spinei’s New Work. Set in a much more accessible minimalist language, her work seemed to enchant the entire audience—an audience made up of Intersection’s regular fans, their children, and the parents of the many high-school kids in the Mariachi ensemble. It is extraordinary that Intersection has found a way to grow its audience and celebrate diversity within the setting of a classical music concert. ¡Muy bien!

For more about Intersection, visit www.intersectionmusic.org.