Artist Christian Moeller’s Stix is finally complete after months of grueling drilling. Each of the 27 cedar poles required an 11-foot hole be dug for the foundation. Drilling directly into limestone proved to be a difficult task for local contractor Rains Electric. Owner David Rains has said that in his work installing telephone poles all over the region, it was the hardest rock he’s encountered.

Metro Arts is proud to add Stix to the public art collection as another world-class artwork for the city of Nashville. The artist says about the work, “Instead of developing an artwork for the roundabout, my goal became to turn the entire roundabout into an artwork. The result is a large structural piece characterized by color with unlimited 360-degree viewing angles, making the journey around this roundabout an exciting visual experience. What some people might read as a cluster of gigantic arrows fallen from the sky or scattered horse-jumping rails is a digitally created piece of contemporary art, which will age beautifully given its composition of native hardwood and vibrant colors.” The artwork can be seen from many different angles, each giving its own experience and perspective. While the city grows around it, Stix will no doubt provide a striking backdrop. 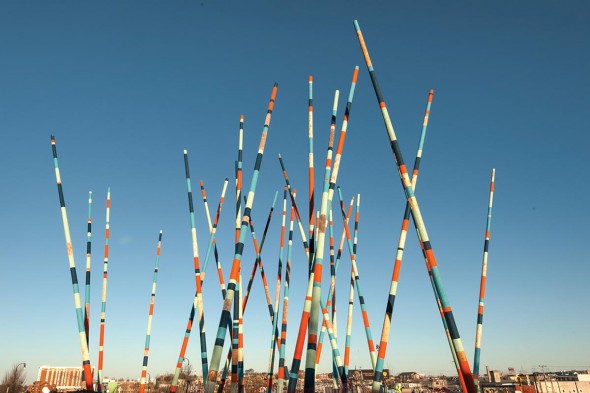 Moeller’s work may be found around the globe, in such locations as the Changi Airport in Singapore, the National Taiwan Museum of Fine Arts, Science Museum in London, Frederieke Taylor Gallery in New York City, the Phaeno Museum in Wolfsburg, Germany, Sea-Tac Airport in Seattle, Centro Cultural Candido Mendes in Rio de Janeiro and Santa Monica, California, among others. His 2012 sculpture, Verdi, located in Bothell, Washington, received a 2012 Year in Review award from the Public Art Network of Americans for the Arts.

Moeller, a native of Frankfurt, Germany, was a professor at the State College of Design in Karlsruhe, Germany, until moving to the United States in 2001. Currently he is a professor in the Department of Design/Media Arts at the University of California-Los Angeles (UCLA) and operates his studio in Silver Lake, California.

Christian Moeller will speak at Watkins College of Art, Design & Film as part of their Visiting Artist Series on Monday, April 11, at 7 p.m. The community is invited to attend.