Fabrication has begun on the much-anticipated and long-awaited Witness Walls. In 2013, Metro Arts commissioned public artist and landscape architect Walter Hood to create a public artwork inspired by the extraordinary events of the Civil Rights movement that occurred in Nashville in the 1950s and 1960s. The artwork serves to both honor the many participants and engage all Nashvillians in conversations about race, equality, and justice in our city.

Witness Walls will be installed on the northwest corner of Public Square Park, steps away from the site of the historic April 19, 1960, student-led protest that led then-mayor Ben West to disavow segregation of Nashville’s lunch counters. From his initial design concept, the artist has intended to place the viewer among the heroic people who took part in this march and in the events that preceded and followed it. The design, as the artist states, “will allow the viewer to engage with them in the mundane actions of sitting and standing, rendered so extraordinary by their intent: desegregation.” 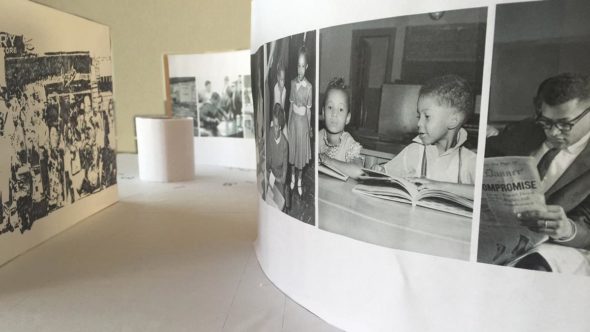 Artist’s model showing the abstract artistic (stencil) compositions to the far left and the shadow graphic (photo) images on the right. Between them is a fountain (not to scale), one of two fountains within the artwork. All images shown are from the Nashville Banner Archives, Special Collections Division, Nashville Public Library.

Through its materials, techniques, and composition, Witness Walls commemorates Nashville’s collective experience. As the artist explains, “The selection of images for the artwork does not seek to highlight key individuals or singular events in a chronological or hierarchical order. Rather, through two resolutions of images accompanied by music of the period, it strives to embed the visitor in a movement in which the whole was greater than the sum of its parts.” The artist’s abstract [stencil] compositions in “exposed aggregate depict scenes of motion: marching, protesting, and walking to school. Meanwhile, the shadow graphic [photo] images allow [viewers] to experience the expressions and emotions of these individuals. Most of these images depict people sitting, all of them focus on people’s hands and facial expressions … Both resolutions fade in and out of focus as you move through the sculpture—the former based on proximity and the latter based on angle—so that new relationships emerge with every step.”

Witness Walls is anticipated to be installed later this year. For more information about this and other public art projects, please visit www.publicart.nashville.gov or www.ExploreNashvilleArt.com.