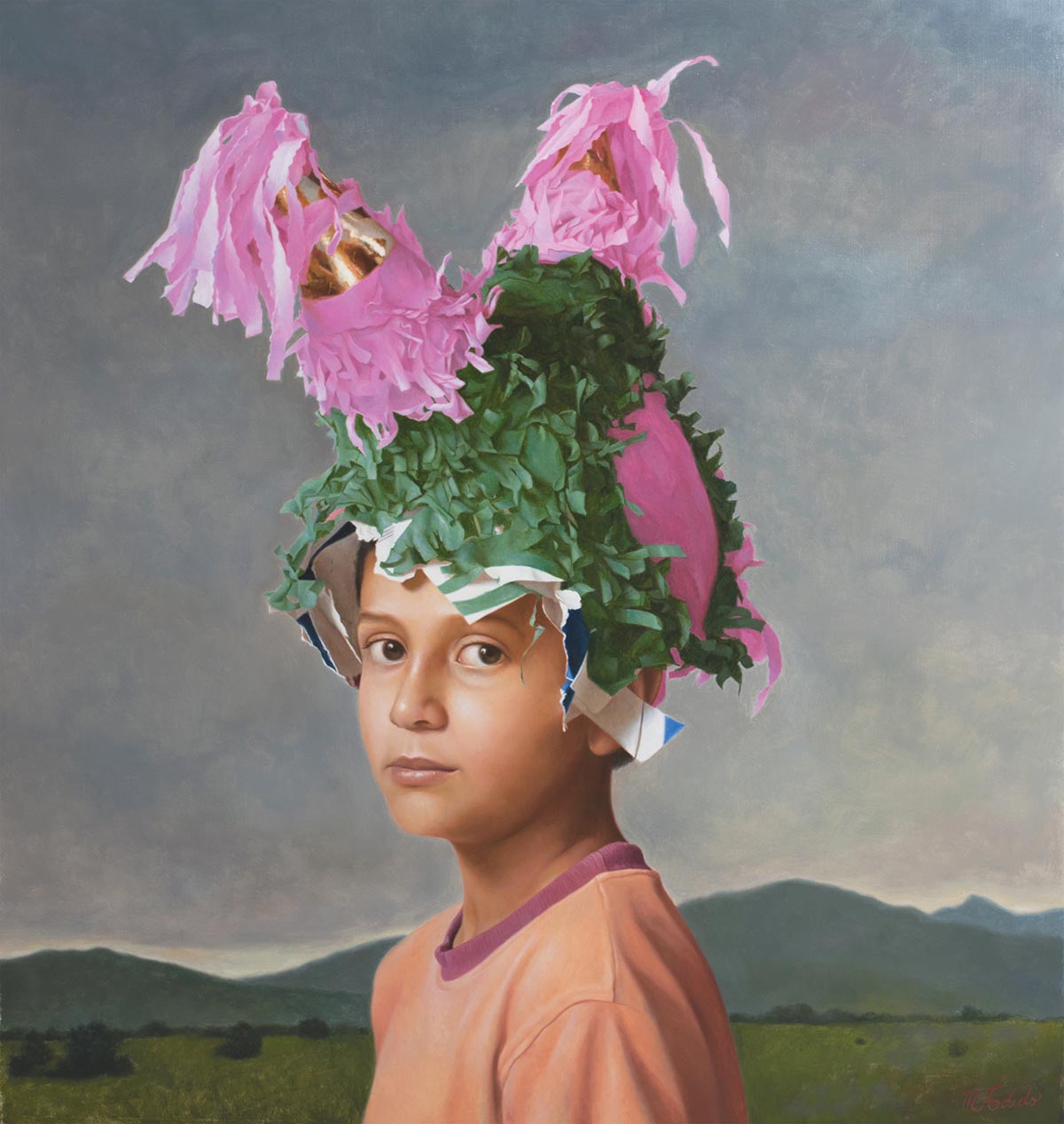 The oil paintings of Atlanta-based artist Melvin Toledo are all quite traditional, with classic thematic elements positioned carefully in soft light: sunny yellow roses in blue vases, or pears haphazardly spread across a kitchen table. But Toledo wants to laugh, so while he pursues something very familiar in his work—the beauty of the mundane—he invites his viewers in with a quiet sense of humor that we cannot help but enjoy.

Toledo’s journey to still-life oil paintings has unexpected beginnings, from a northern Nicaraguan village of 3,000 people, called Ciudad Antigua, where education was sparse and access to TVs rare. It was one of the first colonies built by the Spanish conquistadors in Nicaragua, and it was here he began to play with drawing.

“I was thinking about studying computers, mostly for working in the movies,” Toledo says during a call to his home. “It looked so cool, but back then I didn’t know anybody that had a computer.” 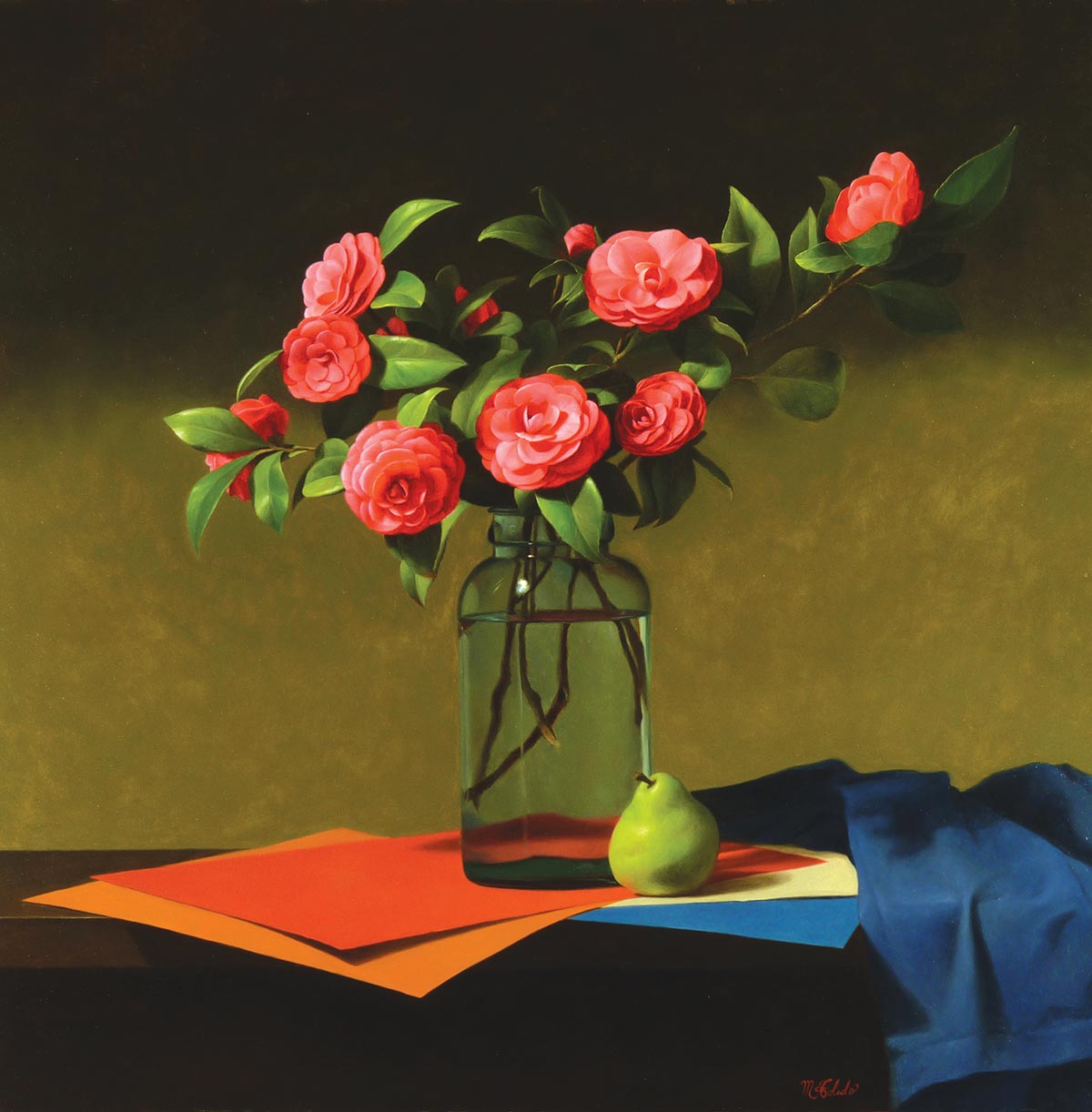 It was only after manga art from Dragon Ball Z grew in popularity in Ciudad Antigua that Toledo began to experiment with pencil drawing, and it was a pleasant surprise to discover he had talent. Beginning in 2000, Toledo studied formal drawing at the School of Fine Arts in Honduras for a year, attending classes every Saturday, while learning to paint super-fast still-life paintings for his uncle, who ran a business churning out commercial paintings for home decorations in Honduras.

“Everything was from imagination, painting grapes and apples and pears and vases, just very colorful,” Toledo says. “I was doing like two large paintings, like 24 by 48 inches, a day. It was crazy.”

In 2005, Toledo met his wife, an American who was in the Peace Corps in Ciudad Antigua. After they married and moved to the States, Toledo continued painting and seeking to learn on his own. And though he was now free to explore other artistic mediums, he continued to hone his still-life craft. Why?

“Most people didn’t go to school [in my town],” Toledo explains. “In my family, I was the first one—and my sisters—to go to high school. My dad was a farmer. My mom stayed at home taking care of the kids, and most of the people there, that’s what they do. When I’m painting now, in a way I paint for them. I like realism because I don’t want people to see the work and ask me what it’s about. A lot of time with paintings, you have to ask what the idea is or what’s behind [it]. I just like the idea that people see my work and can enjoy it the best way they can, without being afraid of not understanding.”

“I like realism because I don’t want people to see the work and ask me what it’s about.” 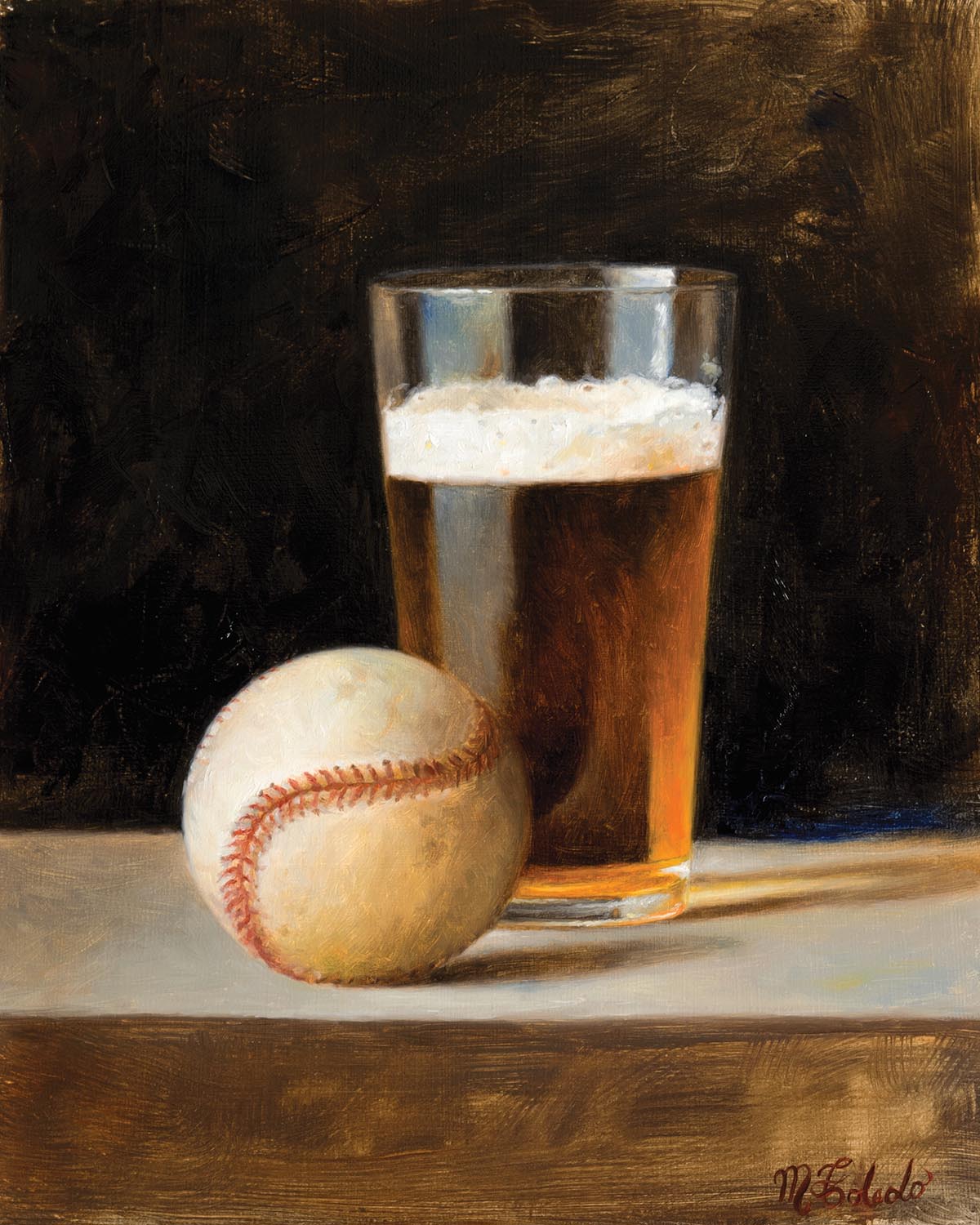 Painted directly from life, though frequently aided by photographs, Toledo’s compositions include glasses of wine or beer, books, colorful produce, or beautifully arranged flowers. And often, there is a dash of humor or a reflection of contemporary life. Atop a book may sit an iPhone, earbuds spilling over the edge of the table. A floral arrangement may include a Nalgene bottle instead of a vase.

“One of my heroes is Chardin,” Toledo says, referring to the 18th-century French master of still life Jean-Baptiste-Siméon Chardin, who captured gentle domestic scenes of kitchen maids and children. “[His paintings] have this very quiet presence, and I love that. But I don’t want my paintings to look like paintings from 400 years ago. I want them to look new and fresh.”

Toledo’s paintings typically seek to create harmony out of color, but by mixing traditional subject matter with contemporary objects, he produces a harmony of time—or a harmony of our objects throughout time. Under Toledo’s hand, an iPhone can be as timeless as a glass of wine. 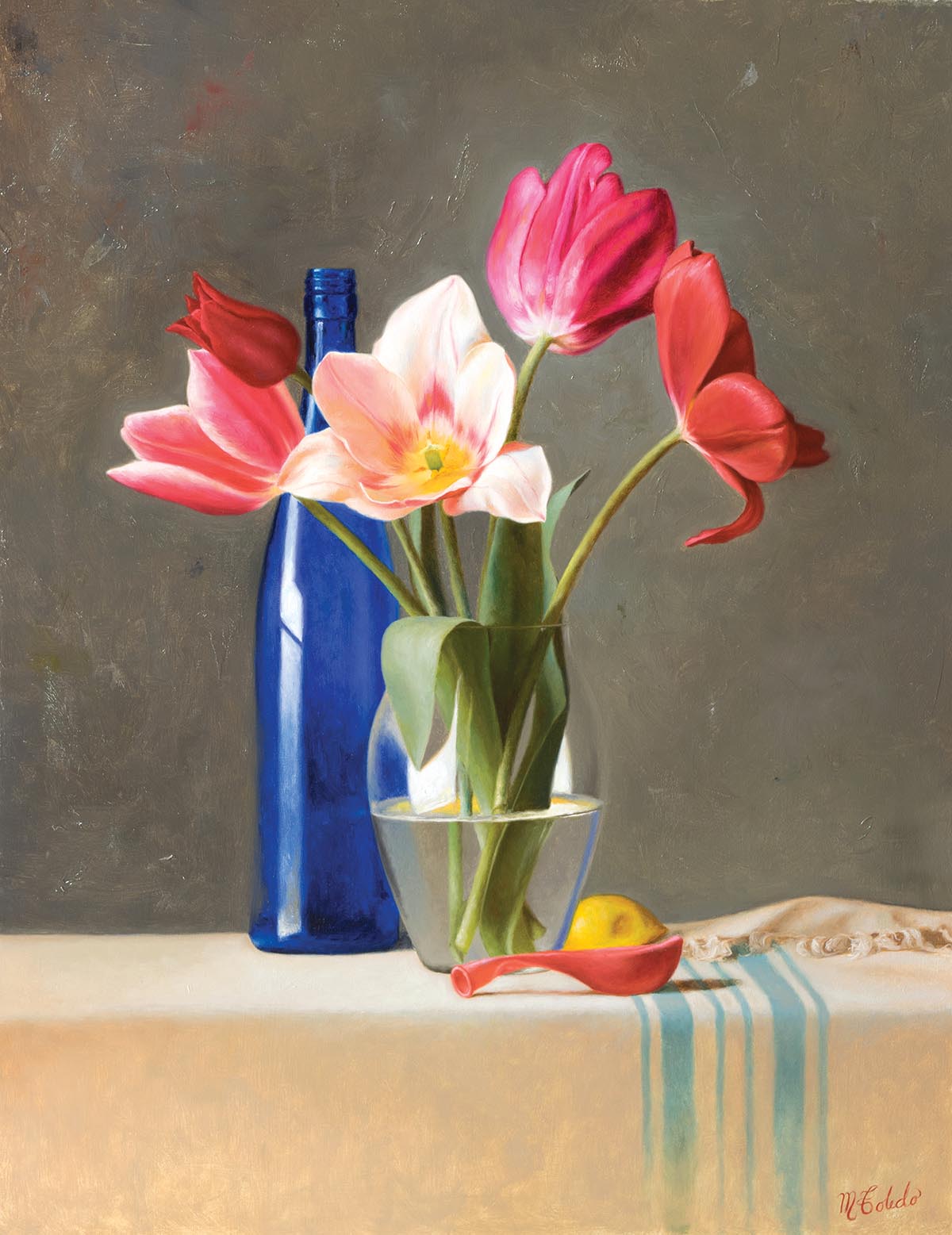 With his figurative work, Toledo captures a different moment in time through portraiture of children. Often painted from memory, these slices of life reflect his own childhood and the games he and his friends would play, like marbles or “spinning tops”—games that seem to be disappearing.

Toledo explains that the Nicaraguan Revolution (1962–1990) was fought in the northern region of Nicaragua, where he lived as a child. “Everybody was very poor . . . so all the kids were outside playing all sorts of games,” he says. “Now that the war [has] ended, the economy is slowly getting better; the streets are getting paved; the houses are looking prettier. They paved the streets, and all the spaces where we used to play are gone.”

One of his most recent figurative paintings, titled What Are You Looking At?, is an outright hilarious portrait of his nephew. It’s a classical portrait with a landscape backdrop and soft light, but the subject—quite seriously—models a massive paper piñata on his head. Without a doubt, Toledo’s sense of humor is infectious. 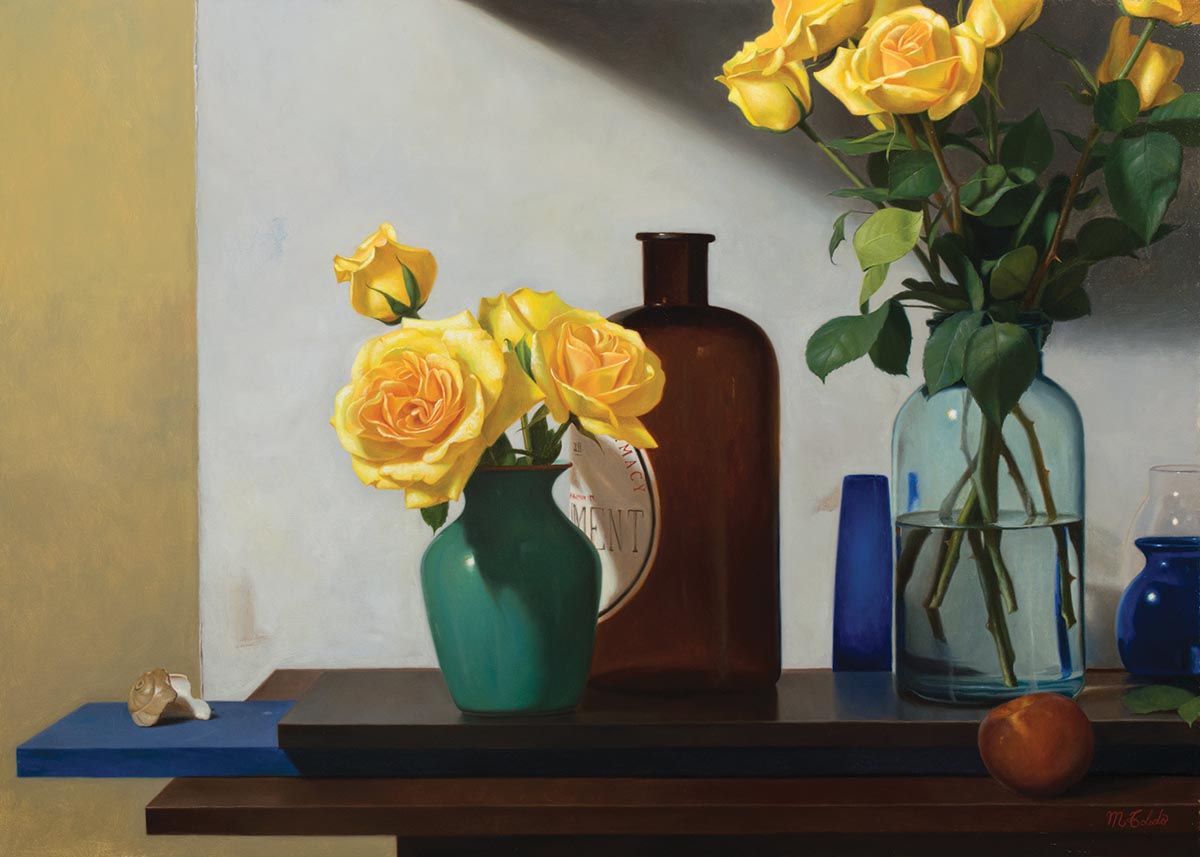 This month, Toledo is the featured artist at Gallery 202 in Franklin, Tennessee. To see more of Melvin Toledo’s work, please visit www.gallery202art.com and www.melvintoledo.com. 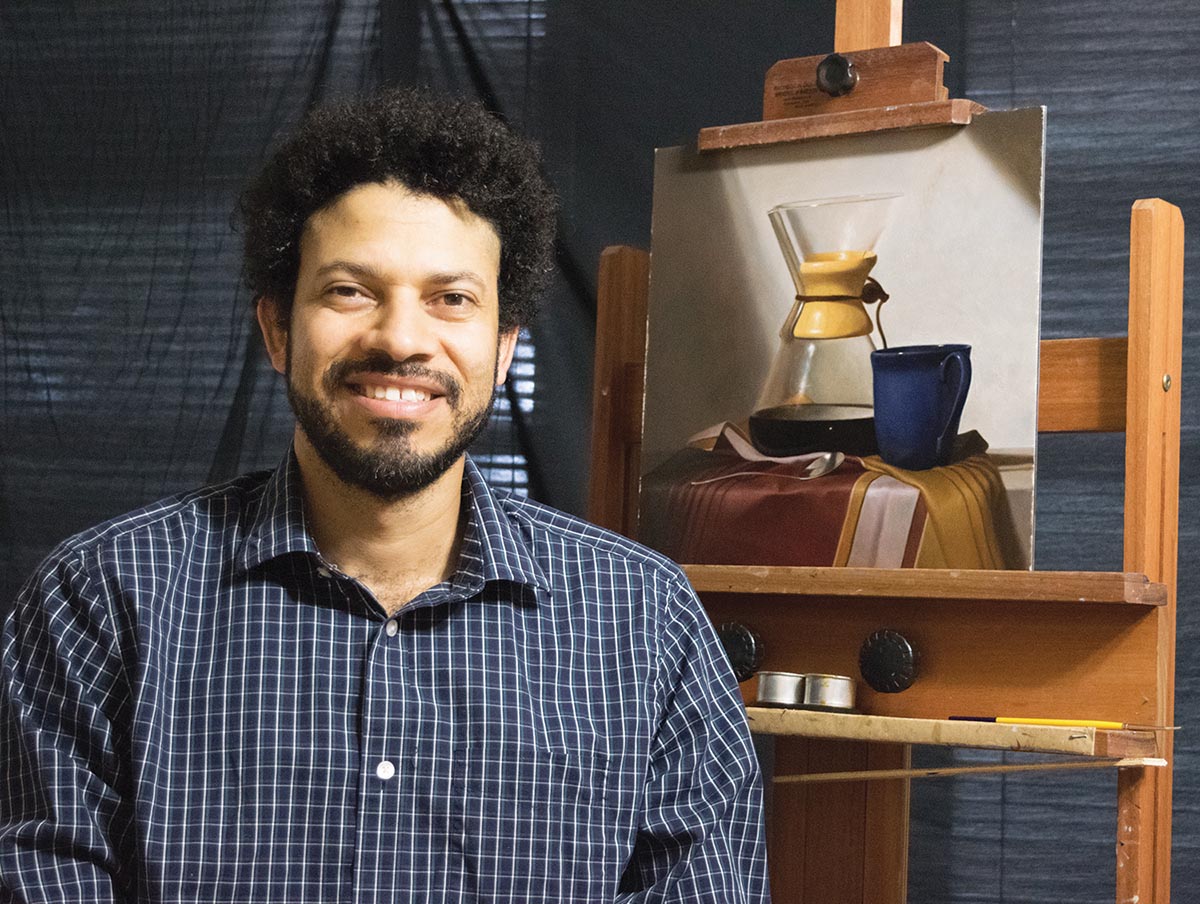 Melvin Toledo in his studio; photograph by Lauren Toledo