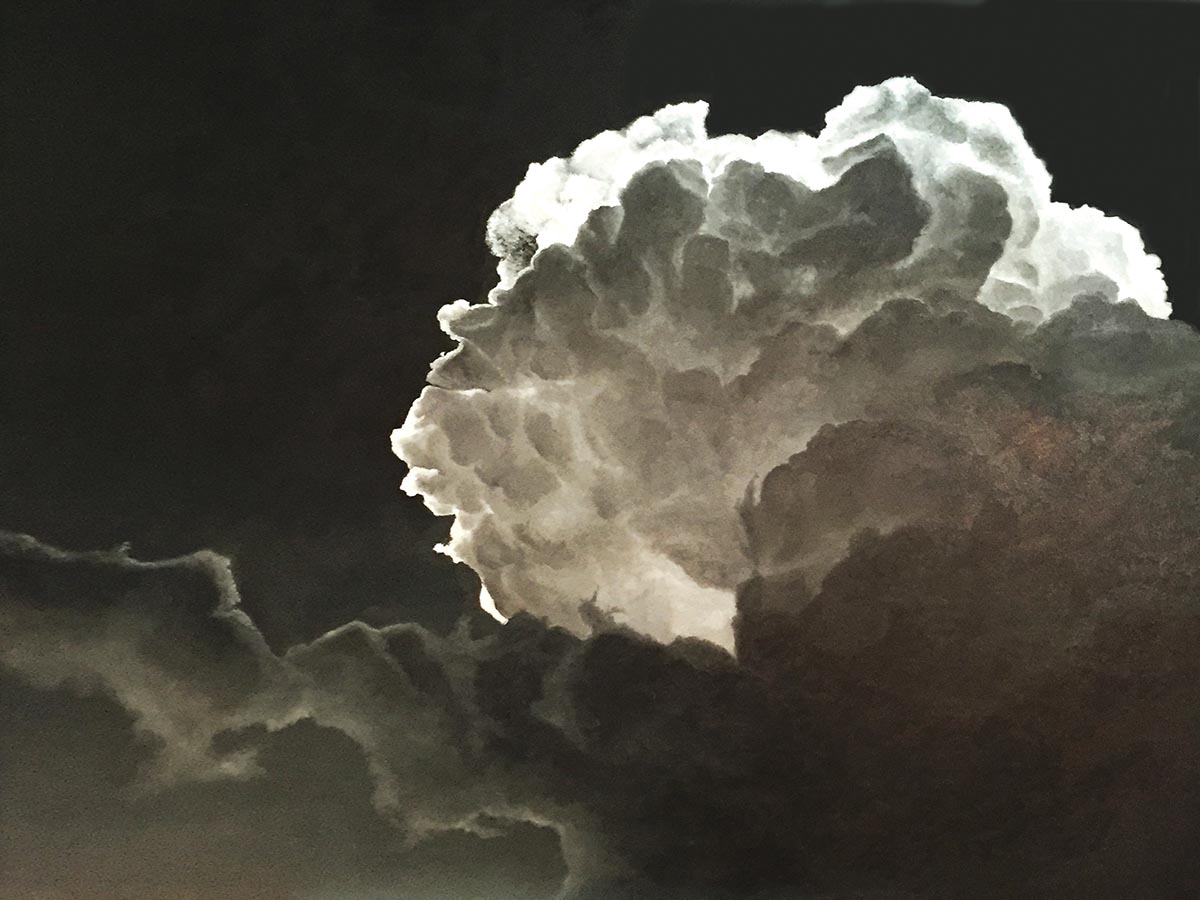 Clouds are subjects that easily blend abstraction and realism and are as laden with metaphors about the human condition as they are with physically impending storms. 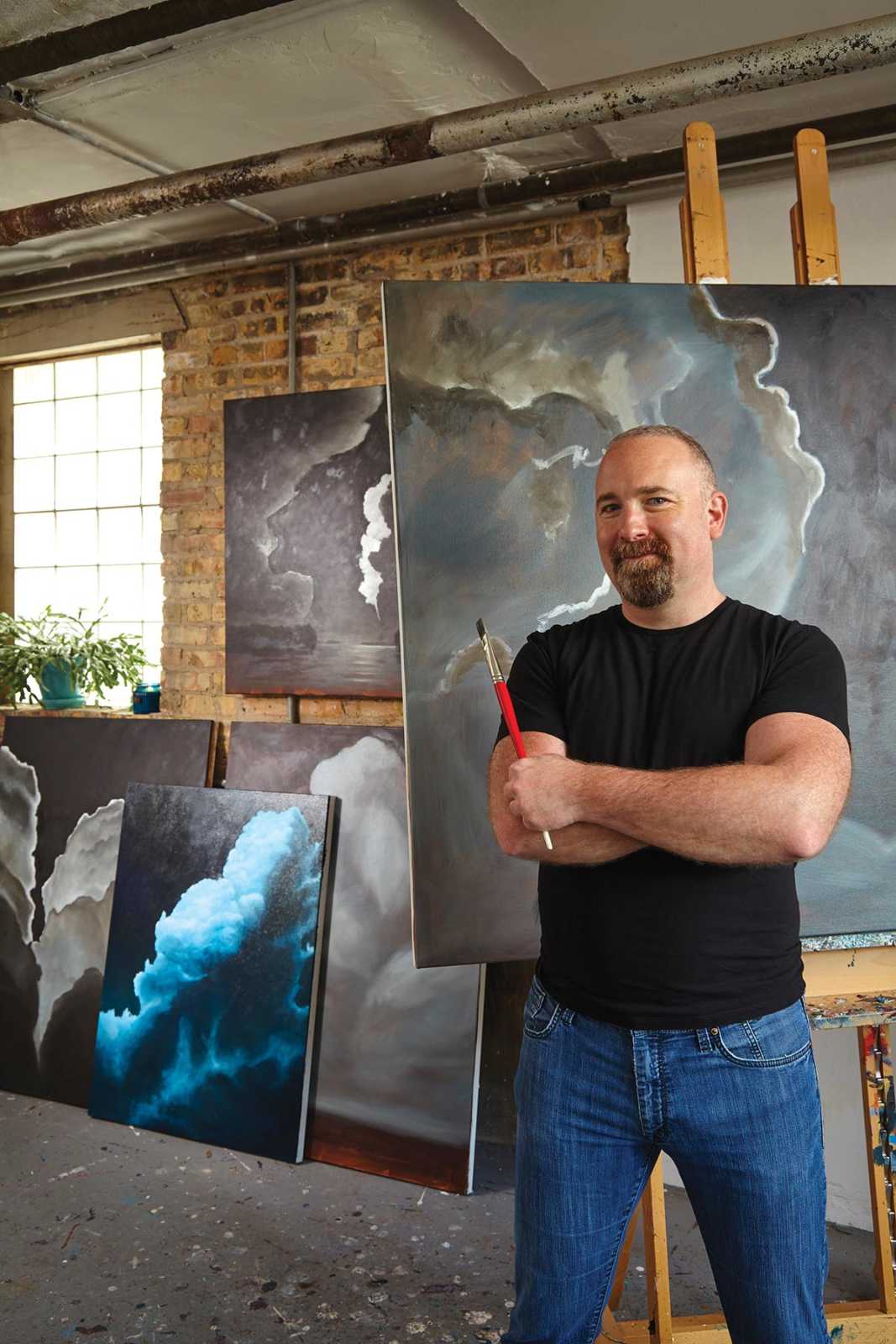 Adam Thomas’s cloud paintings have a serendipitous origin and have evolved in response to popular demand. Thomas has always considered himself a visual artist, but it was not until his mid-thirties that he left the corporate world to pursue a full-time career, which launched quickly with a television appearance in Arizona about his work as a pet portraitist. From there he has expanded his oeuvre, moving into work with oils, painting abstracts, and always returning to subjects in nature.

Now based in Chicago, Thomas finds that the atmospheric sky over Lake Michigan is a constant source of inspiration. One day he was bicycling along the shoreline and stopped to stand in awe before a gigantic, black thunderhead. He took a photograph of it and immediately went home to paint this scene of the great lake’s sky and its centerpiece—a majestic and powerful cloud. Thomas mentioned his new artistic inspiration to a friend who was opening a restaurant in Chicago and was quickly asked for a series of cloud paintings for its inaugural décor. He has since become “the cloud guy,” with over three thousand following him on social media. Thomas’s friends and followers often send him pictures of cloud formations they find interesting or reminiscent of his paintings—a source of great joy for the artist. To him, the ease of connecting through social media creates these moments that prove he has inspired his friends to pause, enjoy their surroundings, and look up to admire these great and fleeting natural beauties. 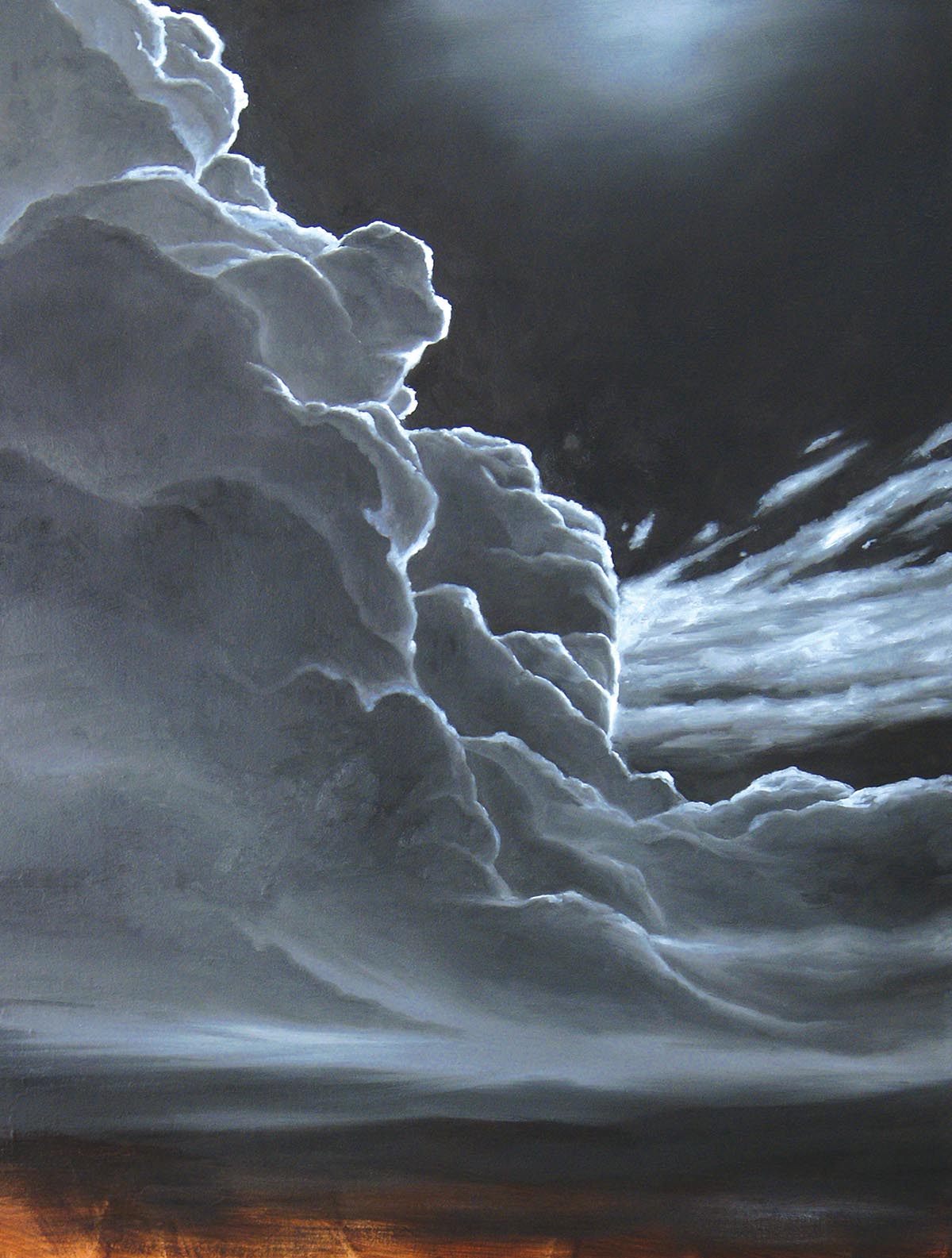 Thomas told me the story behind one of his paintings, Lion in the Sky, which is in the exhibition at The Rymer Gallery. As would be appropriate only in 2016, the scene was crowd-sourced, albeit by chance. Several friends sent him pictures of the same intriguing cloud formation he was noticing himself out the car window. It was both portentous and beautiful: a bloc of darkness with pockets of light fighting their way through, all accentuated by its reflection in the lake below. While he admits that knowing when a painting is finished is the hardest part of the process, Thomas created Lion in the Sky in a whirlwind week as soon as he arrived home. The picture shows a clearing storm, and as the dark clouds separate to recede over the banks, a bright, white cloud replaces them. He captures the fleeting moment in subtle gradations of gray, and, if caught at the right angle, one might also see the shape of the eponymous lion.

I asked the artist if he plays the cloud game, looking for familiar shapes in these bundles of moisture that drift across the sky. Thomas replied that he absolutely does and incorporates this experience into many of his cloud paintings. It is, I suppose, a way to blend his two favorite artistic subjects of nature and animals. It also reflects his own interest in surrealism; Thomas likes art that makes you think. Clouds are subjects that easily blend abstraction and realism and are as laden with metaphors about the human condition as they are with physically impending storms. 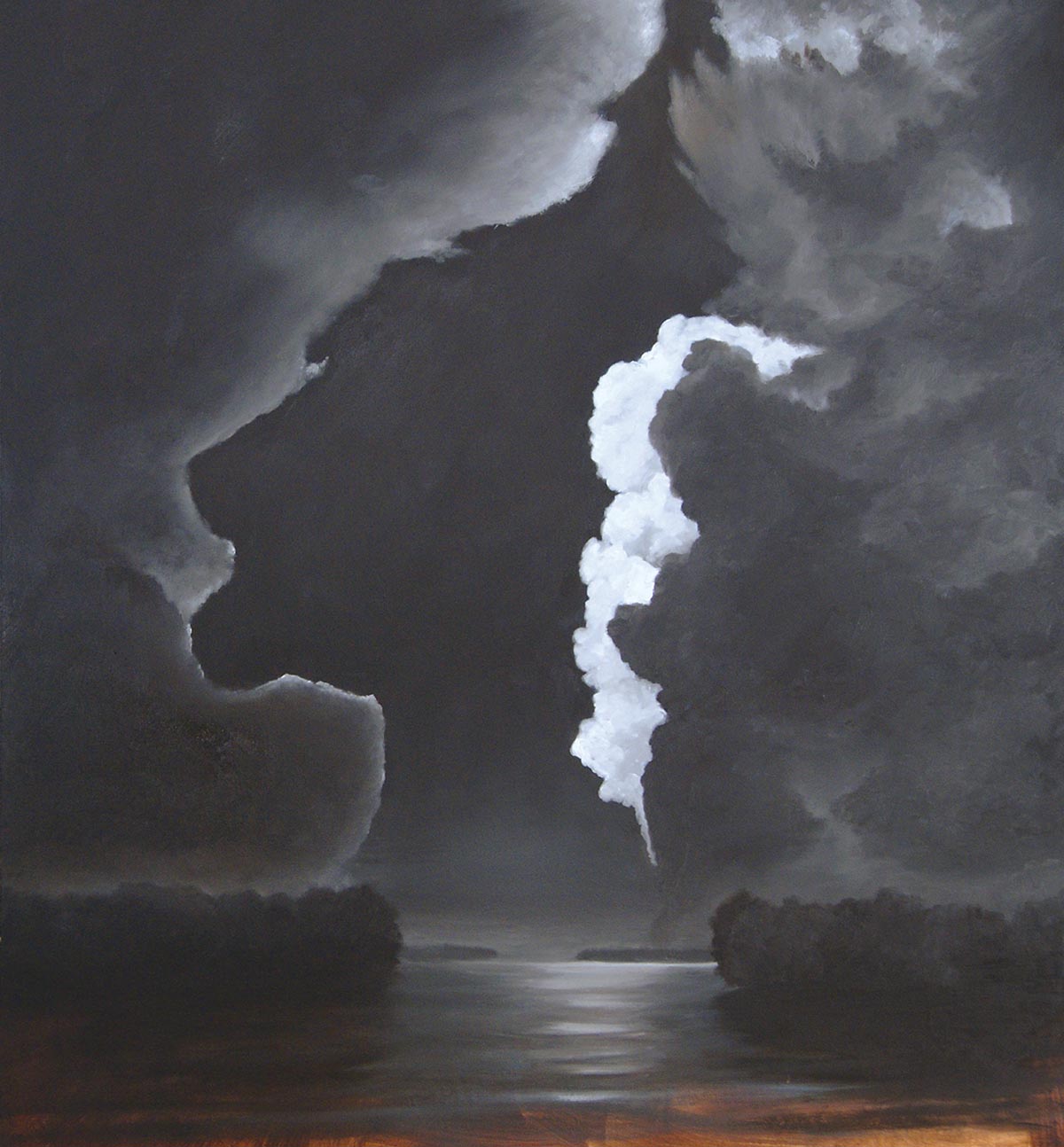 Herb Williams, the curator of The Rymer Gallery, chose to exhibit Thomas’s work because “the scale and the drama spoke to me. If you really look at his paintings, he gets viewpoints that are unusual—the sky is all-encompassing.” Williams noted, too, the strength and power wrapped up in this subject matter and Thomas’s skill at conveying them in paint.

Adam Thomas’s favorite part about his cloud series is the light, which is arguably the most important part of any painting, but it is absolutely integral to one of the sky and the natural formations that diffuse and obscure our celestial light sources. He describes how “it is exhilarating to paint a backlit cloud that covers the sun so you can only see its outline and pockets of light coming out.” This is something to look for in his paintings when you go to see the exhibit at The Rymer Gallery. Other dynamics to spot include the various ways in which he is interested in tension and creates a “push and pull.” It manifests between darkness and light, literally and figuratively, and on the surface of the painting—at times leaving texture as a clear sign of the artist’s hand and at others smoothing it out to erase his trace. Many of the paintings are largely in grisaille, putting an even stronger emphasis on the way light plays within the varying shades of gray. Amidst the nebulous form, you should also play the cloud game yourself, looking for animals and other shapes. And, at the end of the day, let his works inspire you to look up and enjoy the real clouds in the sky outside this July. 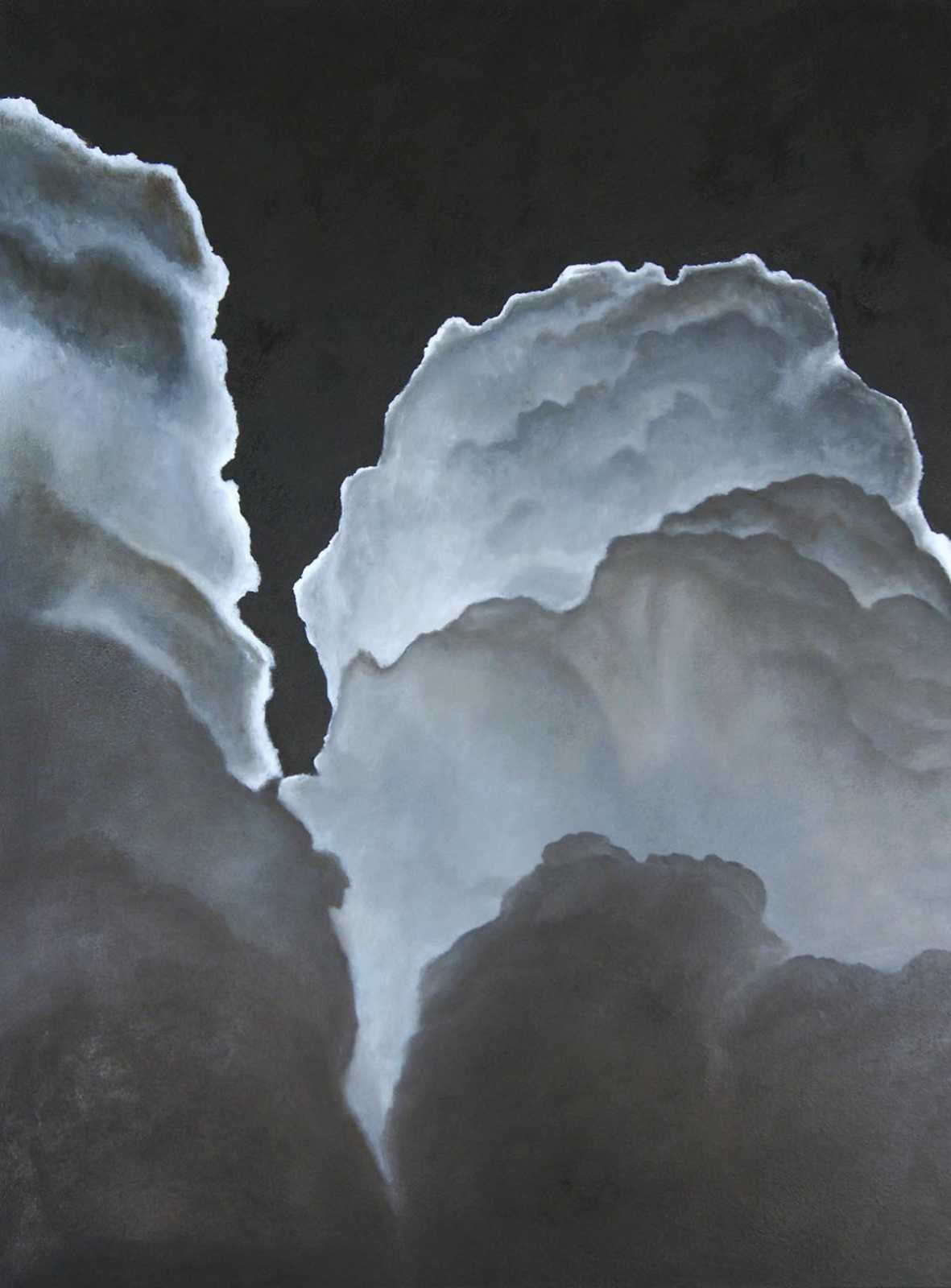