“I do these works that I feel are beautiful representations of women, but I don’t think I fetishize them as a male. I try to find the beauty and the power, not just the sexuality. But that’s there, too; that’s part of what makes us all human.” 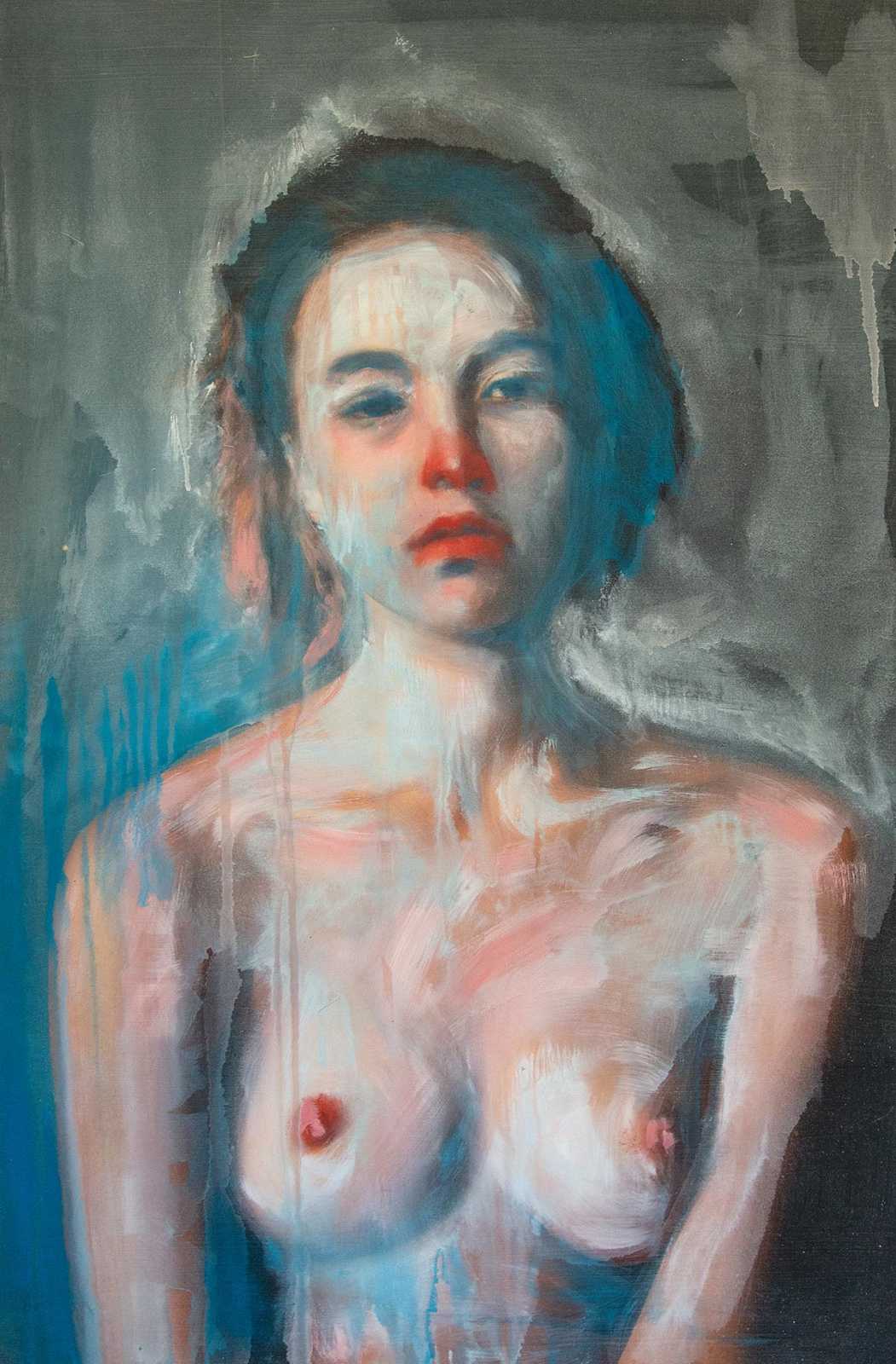 On October 1, The Rymer Gallery will turn over its entire gallery space to just one artist. Paintings, sculpture, and gum dichromate prints—art made with the expression of beauty in paint and emotion, art that seeks to make peace with sorrow and accepts femininity as both fragile and powerful—will fill the contemporary art gallery on 5th Avenue of the Arts. The artist is Buddy Jackson, the show is Amor Fati/Love Your Fate. He took some time out from his studio to talk about art, life, growing up, and his fascination with the female form.

A question is posed to artist Buddy Jackson: Do you have any regrets about pursuing fine art over commerce?

He answers swiftly, breezily: “Regrets are stupid, I think. You know? There’s a tombstone on the past; there’s not a damn thing you can do about it.” How’s that for transparency?

The question of regret applies intimately to Jackson because, years ago, he threw away, with both hands, a lucrative design firm he owned to pursue first sculpture and then more mediums, including painting and photography.

“I’m much more fulfilled now,” he says. “I made good money in my design business. But money just is not enough for me. It’s just not.” 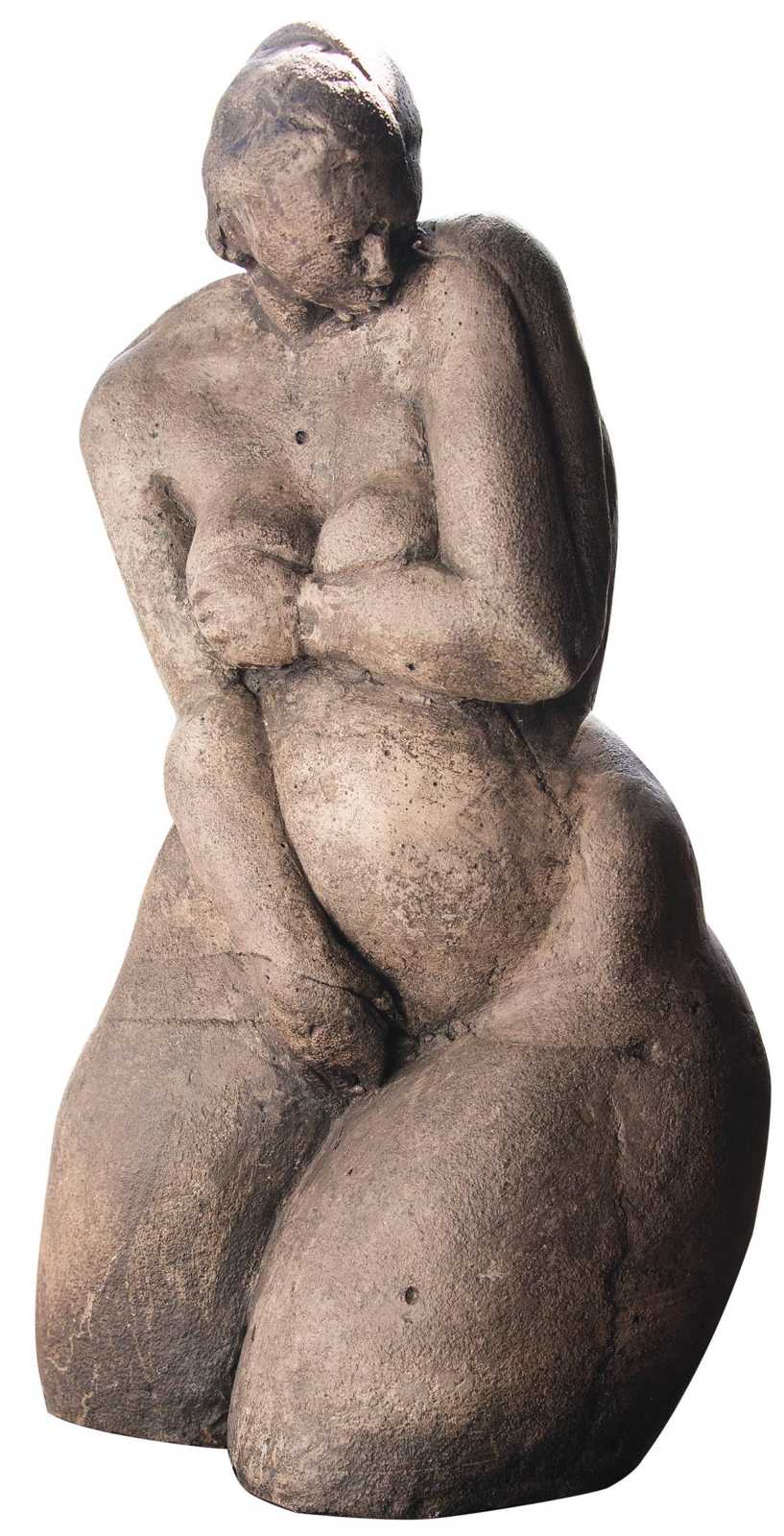 With his wavy, silver hair—nearly as wild as was Beethoven’s—and a tattoo on his left arm that, in Latin, translates to “love your fate,” Jackson looks every inch a man who has chosen the proverbial road less traveled. Fittingly, he presides over a glorious, Miss Havisham-style house in Nashville, a fading beauty in which the historic wallpaper reaches out from the decades, demurely confessing its age in a tear here, a stain there. In the lushly overgrown back yard sits his art studio.

Art is in every room of the house—not just Jackson’s, but other works he loves, including outsider art by B.F. Perkins and Jimmy Lee Sudduth. In his own creations, Jackson is inspired by Auguste Rodin—naturally. Any sculptor who creates figurative work bows at the feet of this master whose female sculptures arch their backs in the throes of ecstasy or bind their bodies in a lover’s kiss. Rodin’s is not only the perfection of sculpture as an art form, but the perfection of the classical female figure.

In his own sculpture, Jackson eschews perfection, for he also looks for inspiration from Gaston Lachaise, an early-20th- century sculptor whose muse was the voluptuous Isabel Dutaud Nagle. Lachaise’s works, mostly in bronze, reveal nudes with uneven, heaving breasts and rounded bellies. His female archetype unabashedly proclaims her strength. Hers is not the fleet-footed vigor of a taut, virginal Diana armed with bow and arrow, but that of a fecund woman with feet planted firmly on the ground, the staunchness of her figure announcing that she is not made for the gods, but for mortals. And she is imbued with the earthly stamina to endure the sturm und drang that mortality entails. 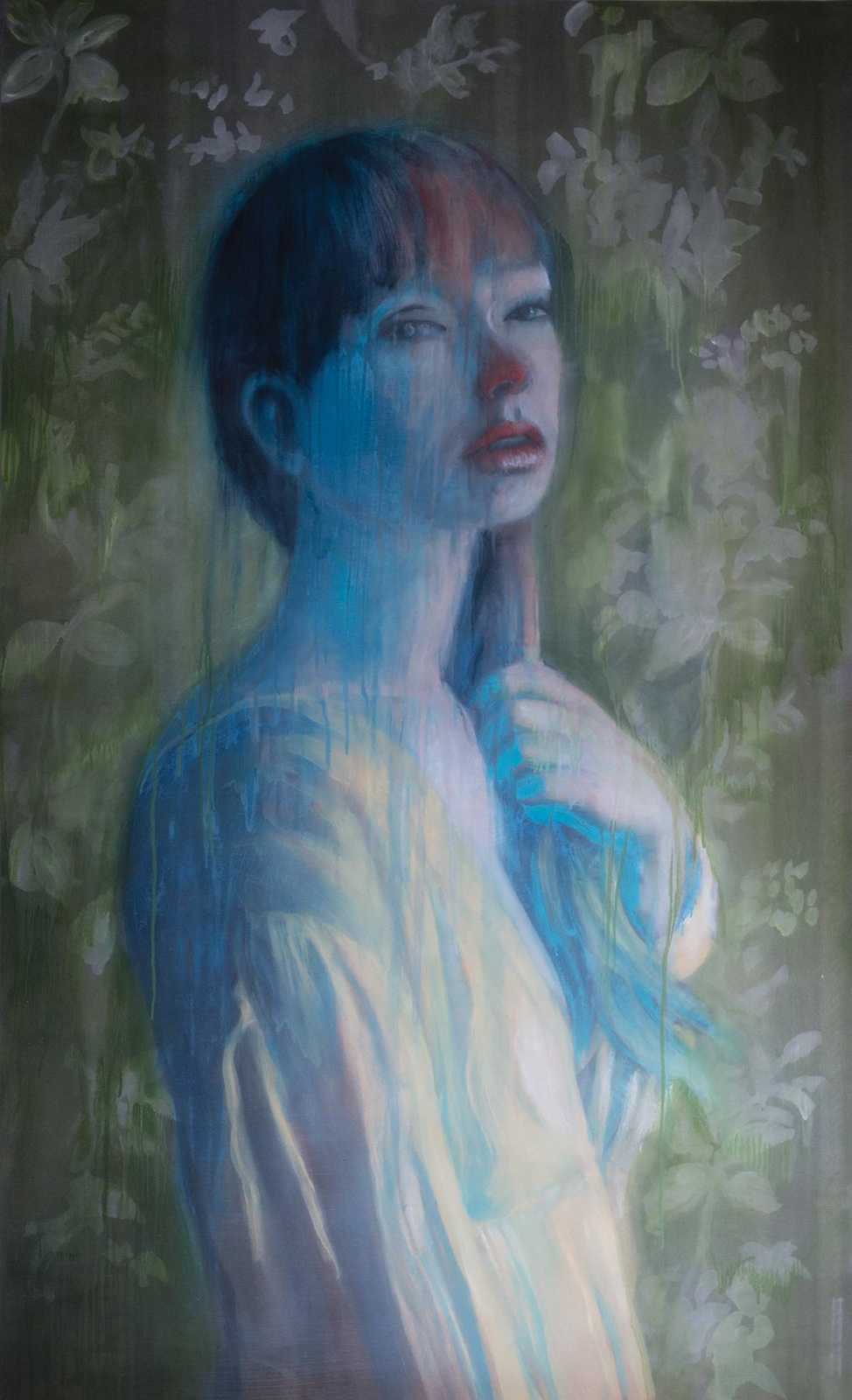 “I do these works that I feel are beautiful representations of women, but I don’t think I fetishize them as a male,” Jackson says. “I try to find the beauty and the power, not just the sexuality. But that’s there, too; that’s part of what makes us all human.”

He adds, “Women interest me—their moods, their power. Most of the female figures I do I feel are powerful. And then, also, there’s a sadness, I think, in women. It’s probably just from the way that they’ve been forced into a lesser role in society and in the world forever. And I connect to that.”

It is in Jackson’s paintings that we see the melancholy of women emerge, their eyes downcast, their poses standoffish. Such honesty in depicting women comes from Jackson’s anthropological eye for analyzing the complexity of the sexes in society, a world in which women often are seen as “less than.”

“When you’re a six-year-old boy, the worst thing you could be called would be ‘sissy’,” he says. “So basically, little boys are taught by society—by school, by coaches, by their dads, by their moms, by everybody—that feminine traits are bad. But then we expect these little boys to grow up and respect women. How does that work?”

Jackson’s deep-rooted sensitivity to the tumultuous dichotomy of the sexes began early, as a boy who preferred to play with girls for their “creativity.” And while his firsthand experience as a man gives him personal insight into the creation of sexism in boys, he’s as sensitive as to how girls are damaged by it. 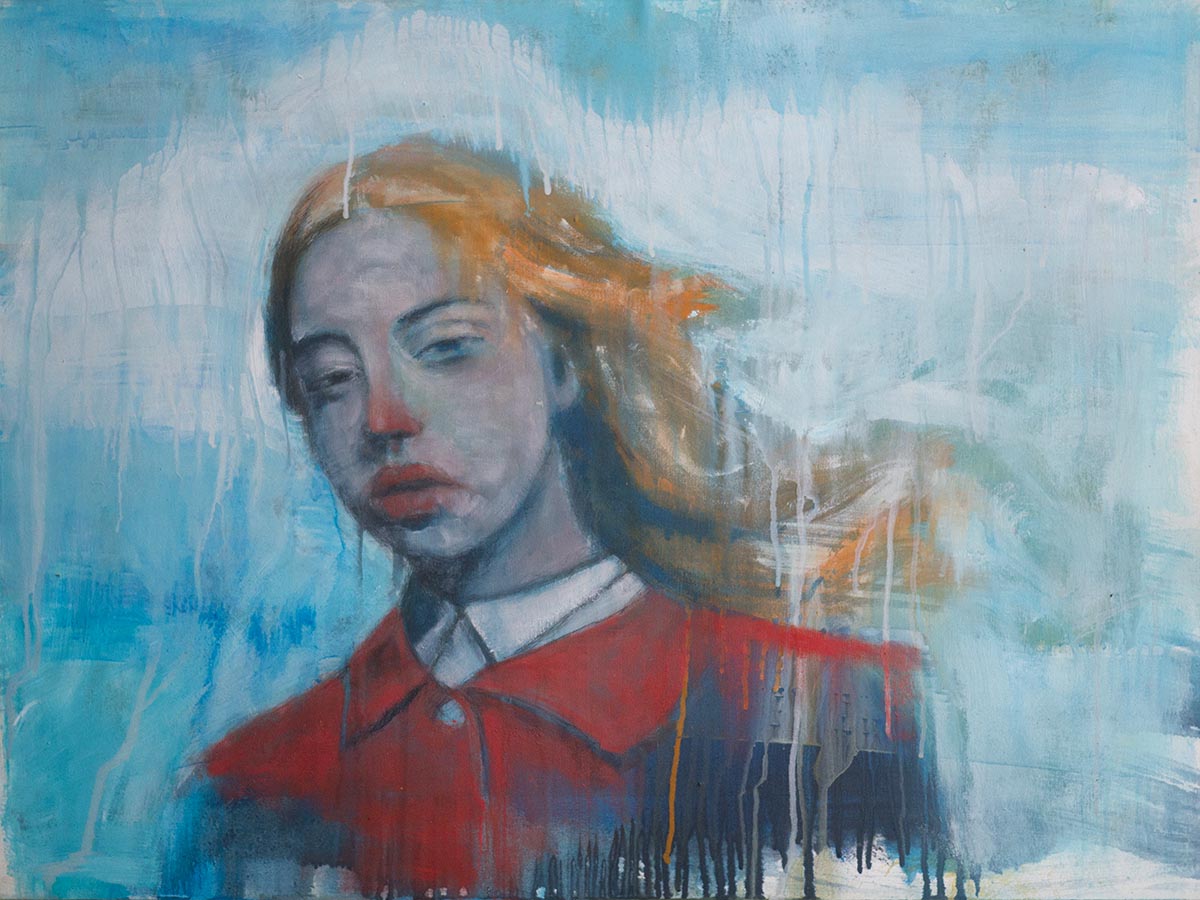 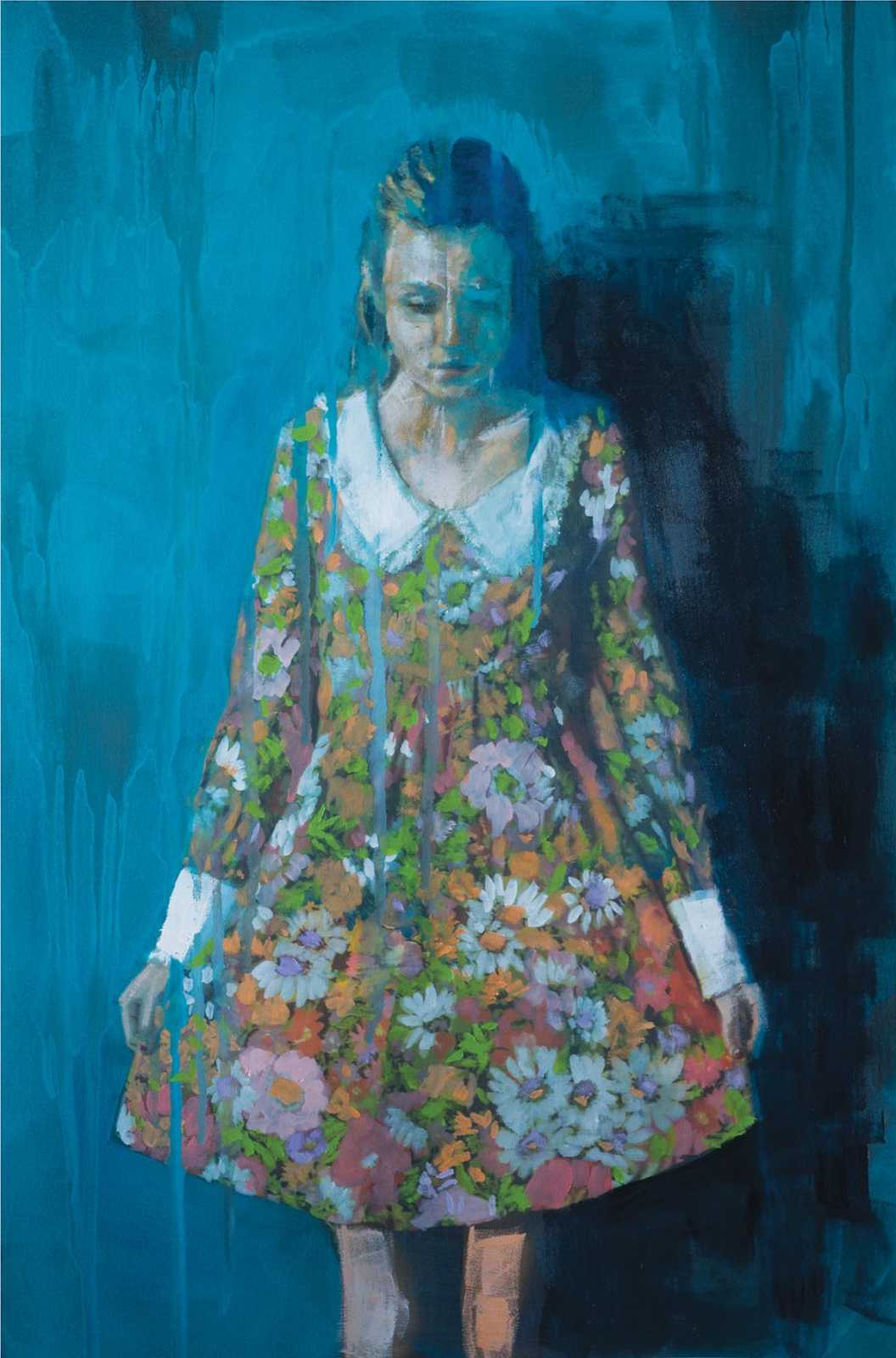 Jackson’s body of work focuses largely on the female figure, whether it is made incarnate through sculpture, gum dichromate photo prints, or paintings. His women represent reality’s splendid array: There’s innocence found in a gangly, long-legged swimmer, fertility burgeoning in another figure’s rounded tummy, and sexuality discovered in yet another’s curvaceous thighs.

Yet reality intervenes. On his coffee table is a series he sculpted of women wearing bikinis. They’re gorgeously comfortable in their skin, going so far as to distend their rounded bellies.

“She’s so beautiful,” he says, holding one of the figures. “But not on society’s level. If she would have been on a cover of a magazine or on Facebook or Twitter, she would have gotten shamed. Shamed. Not just like ‘That ain’t my cup of tea,’ but like ‘There’s something wrong with you.’ I’ve worked with hundreds of models. I know what women look like. I know what they’re supposed to look like naturally. That’s not what we’re fed.” 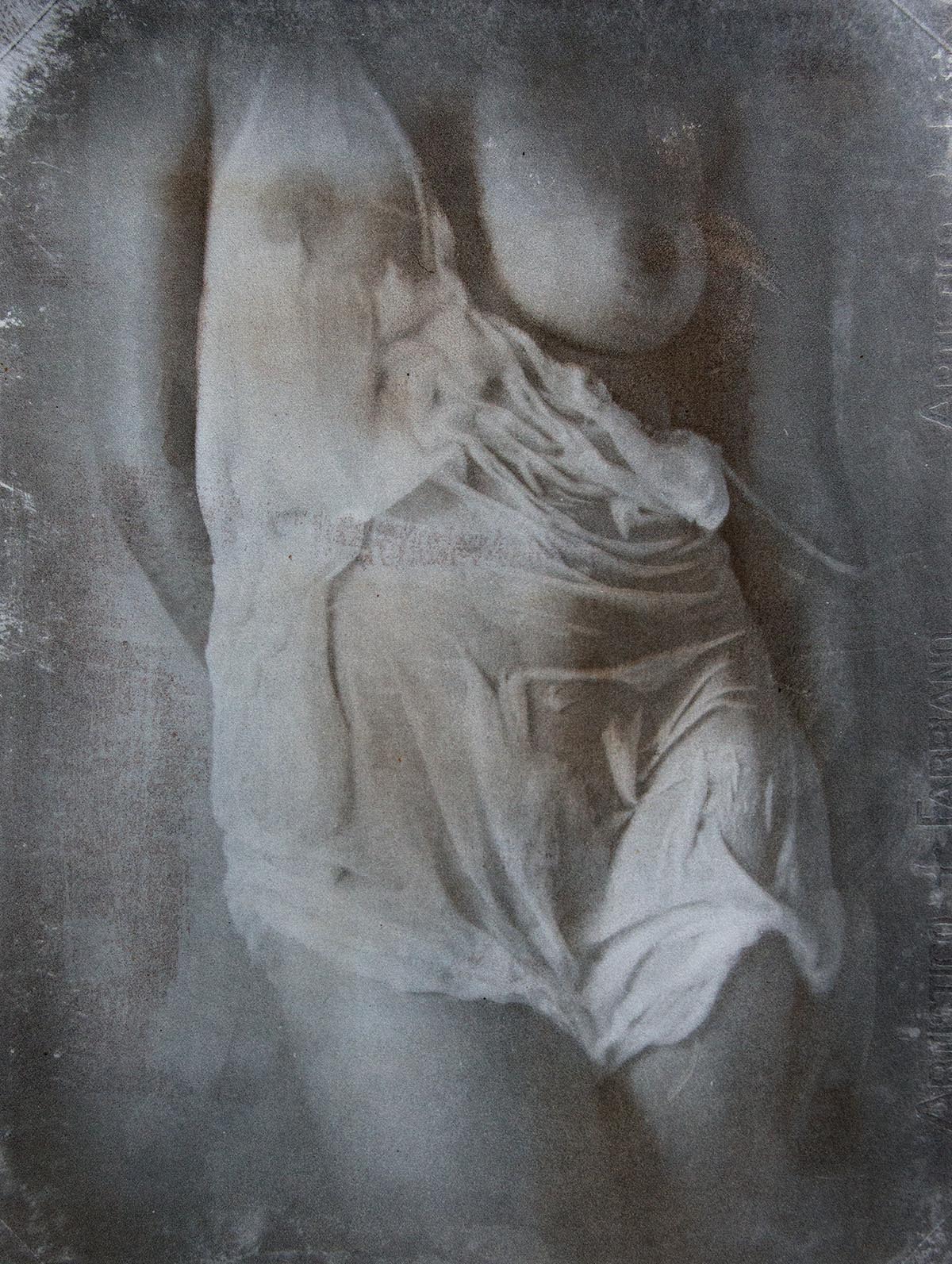 In addition to capturing reality, Jackson’s sculptures capture human movement, whether stately or languid or somewhere in between. With his gum dichromate photo prints, he captures an ethereal quality that adds another dimension to his work; the figures seem fleeting, romantic, and mysterious, much like those in the 20th-century photos of Edward Steichen, who used the same printing process. The hazy quality produced by this process simply channels such aesthetics.

In Jackson’s depictions, reality is beautiful, as is imperfection, should one choose to accept it. Just like accepting—even loving—one’s fate, messiness and all.

“Most of the female figures I do I feel are powerful. And then, also, there’s a sadness, I think, in women. It’s probably just from the way that they’ve been forced into a lesser role in society and in the world forever. And I connect to that.”

Jackson’s exhibit Amor Fati/Love Your Fate will be on view at The Rymer Gallery October 1 – November 1. Nashville Arts Magazine’s Paul Polycarpou will lead an artist’s talk with Jackson on October 28 at 6 p.m. For more information about Buddy Jackson, visit www.therymergallery.com or contact Sara Lee Burd, www.artconsultantnashville.com. 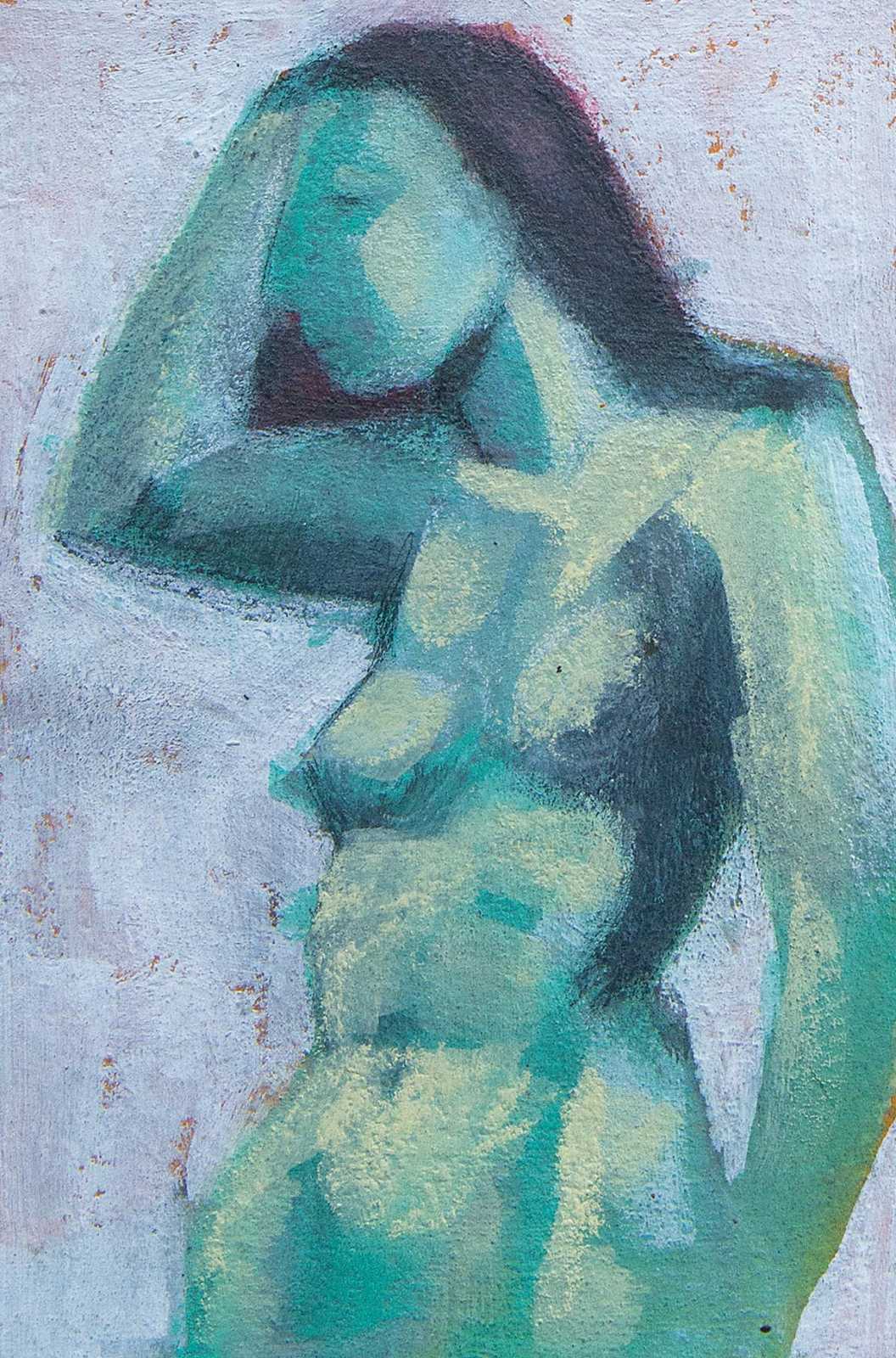 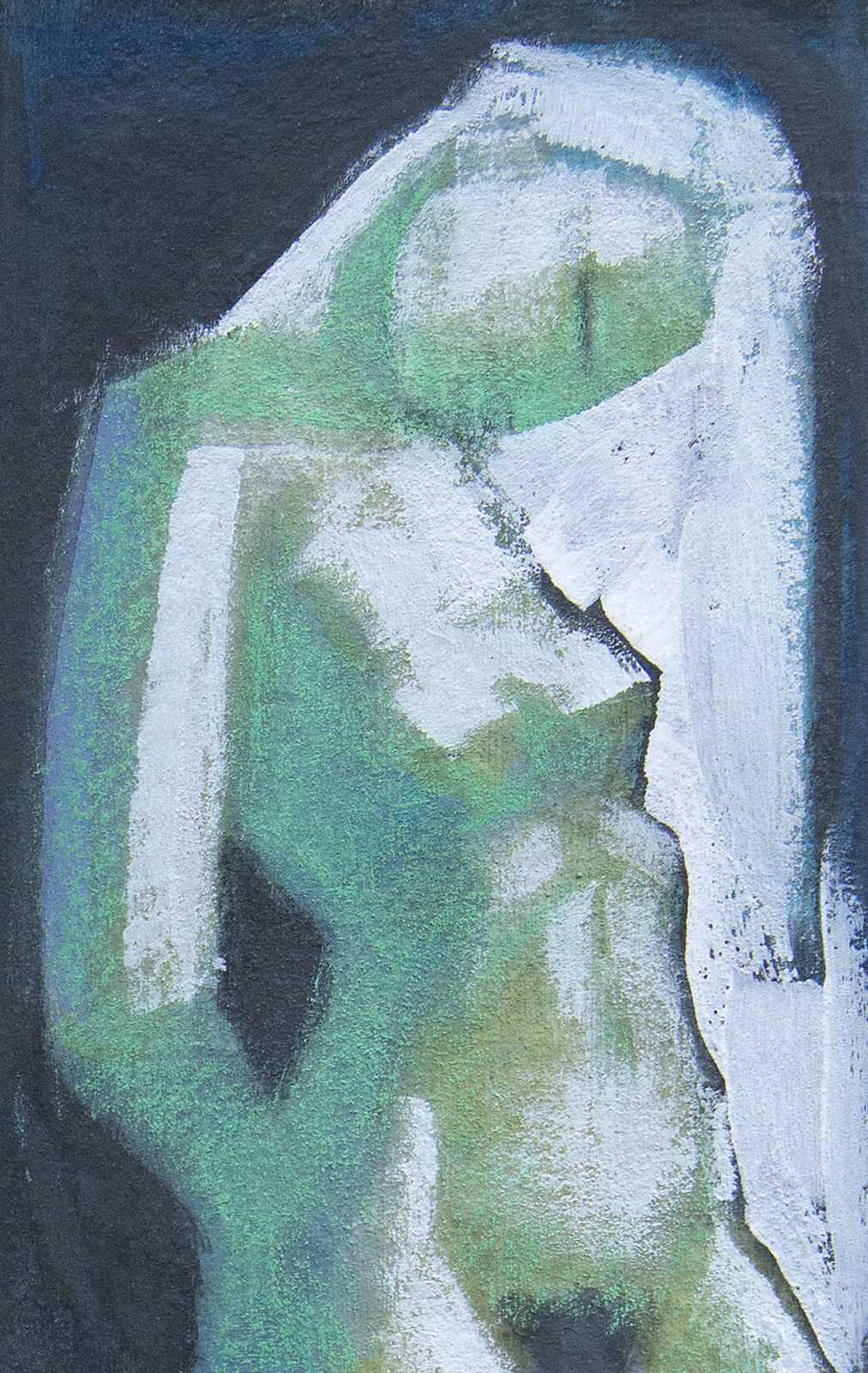 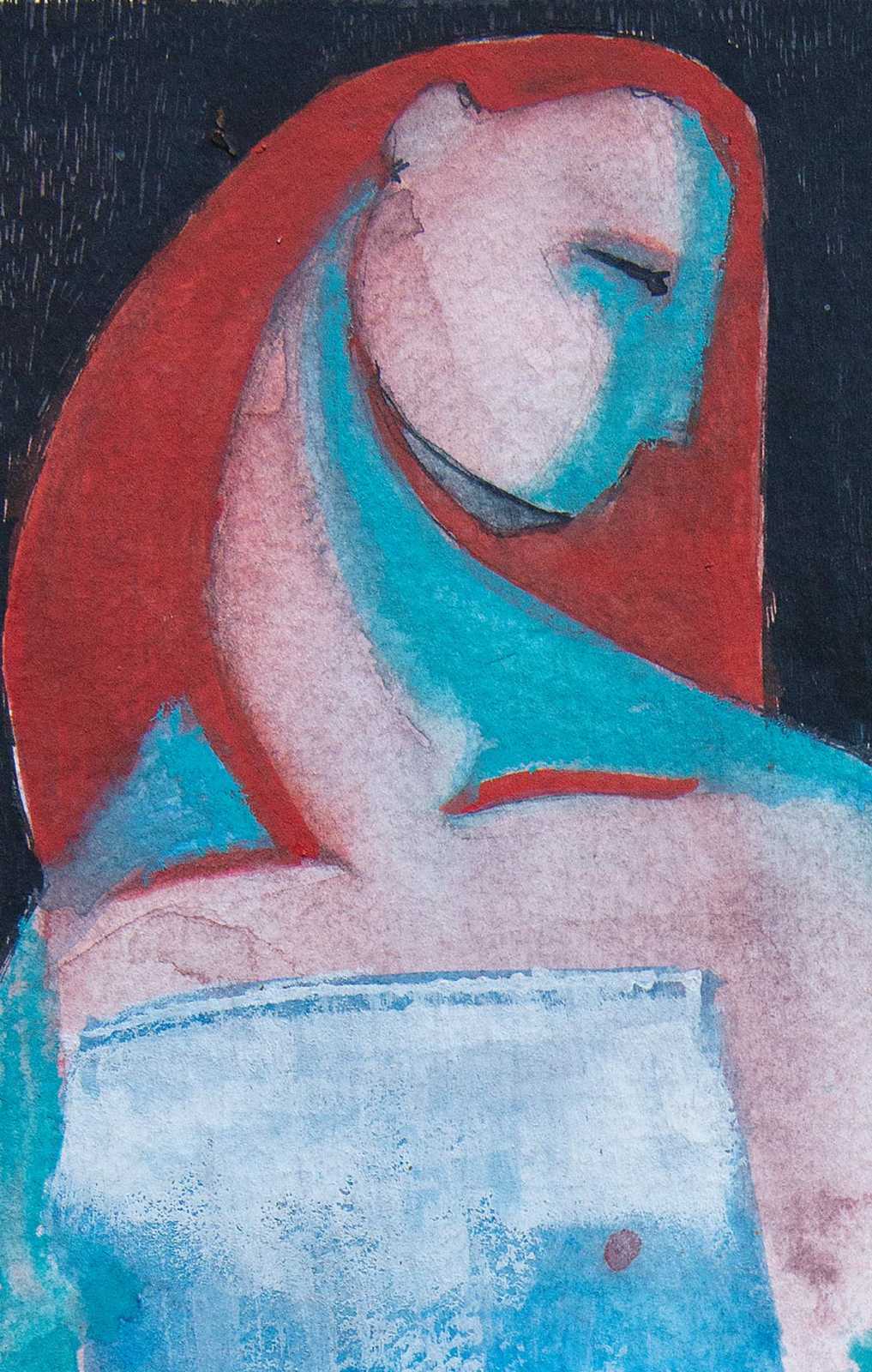 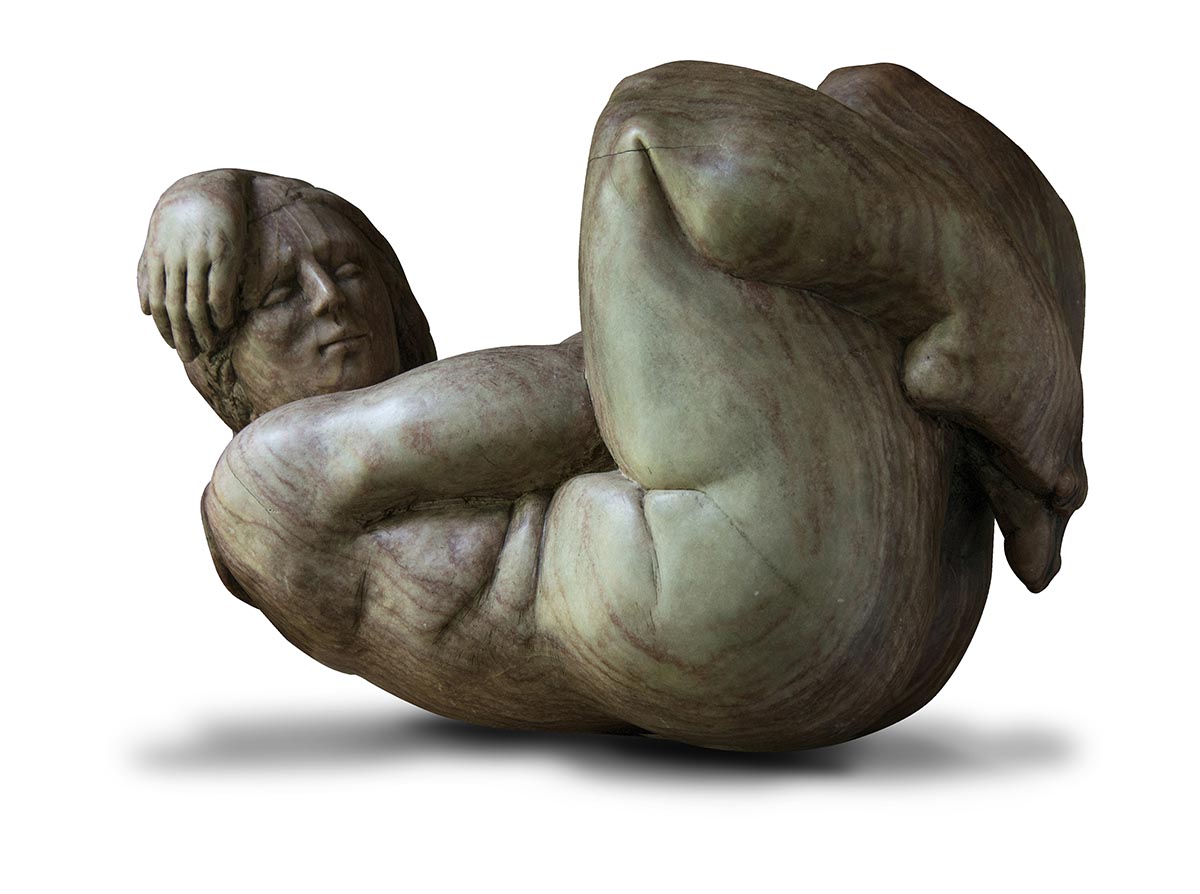 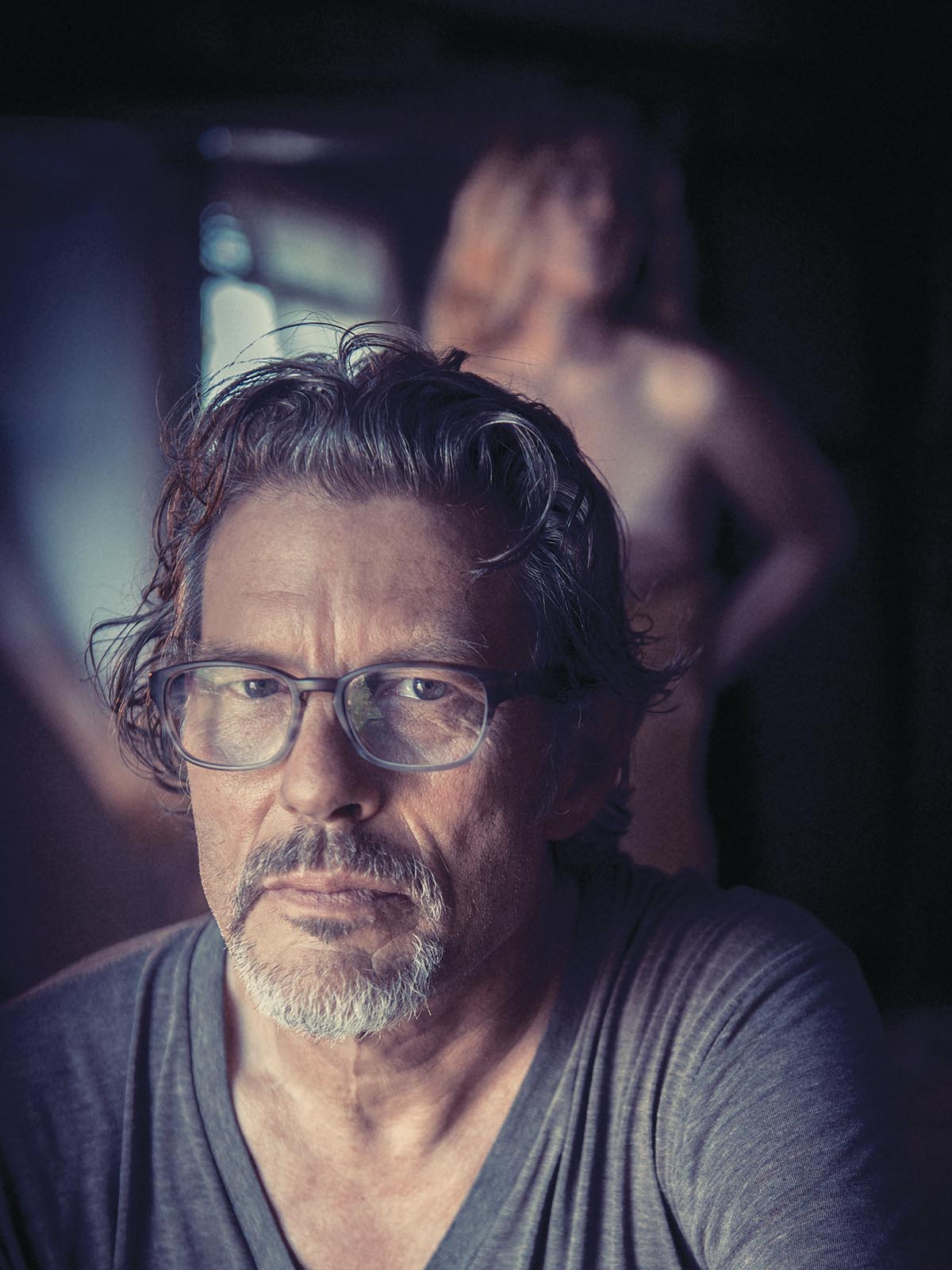