When Marlos E’van checked out the long-neglected building at 1808 Buchanan Street, he saw a space to mount his powerful pop-up exhibition Dyin’ By Tha Gun!, a searing presentation of paintings, sculptures, and masks that takes a nosedive into racial injustice and police violence without looking back. The address once hosted Lem’s Country Kitchen, a bakery, and later a ministry where folks temporarily ran a halfway house. But it’s long fallen into disrepair. Inside, the room is large and airy, with plenty of wall space for hanging paintings and room for visitors to navigate sculptures. But the walls are concrete blocks, painted white here and there, water stained, with wires and insulation blooming like ironic bouquets. The brown tile floor is coated with dust. 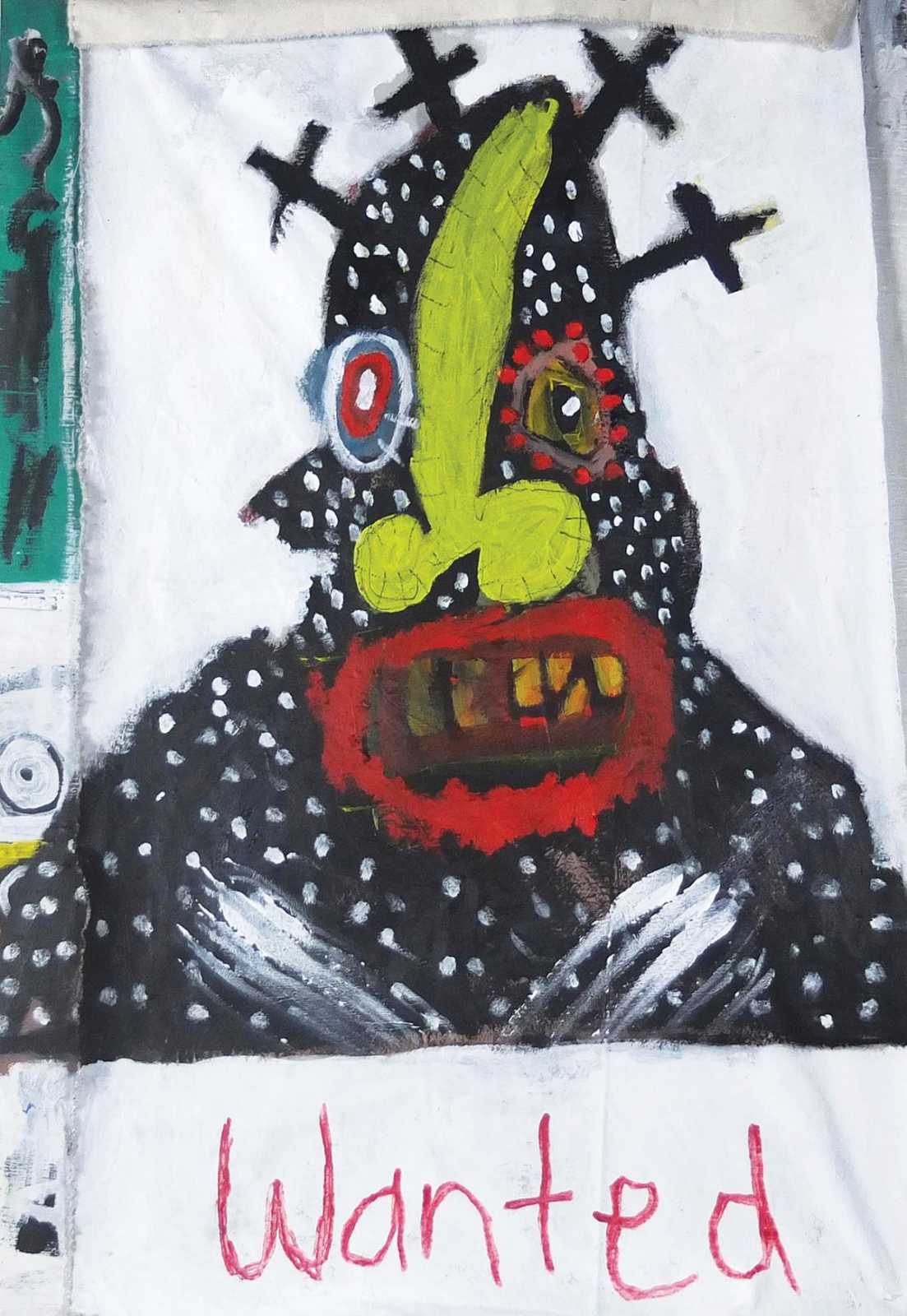 In this unlikely gallery, E’van used vices to attach the paintings to electrical conduits that are spaced evenly along the walls. A recent Watkins graduate and native of the Mississippi Gulf Coast, E’van reflects the ugliness of institutional racism back to us in bright, bold color. His work is figurative, although familiar shapes often yield to bold swaths of color. His subjects are largely black and brown— human, to be sure, but also not. With deft handling of symbols, E’van transfers cultural attitudes and social mores to unsettling portraits of violence, racism, and despair. His aesthetic choice to mount the show in this run-down location shows that his willingness to take risks pays off. The context lends further depth to an already searing study of modern times. 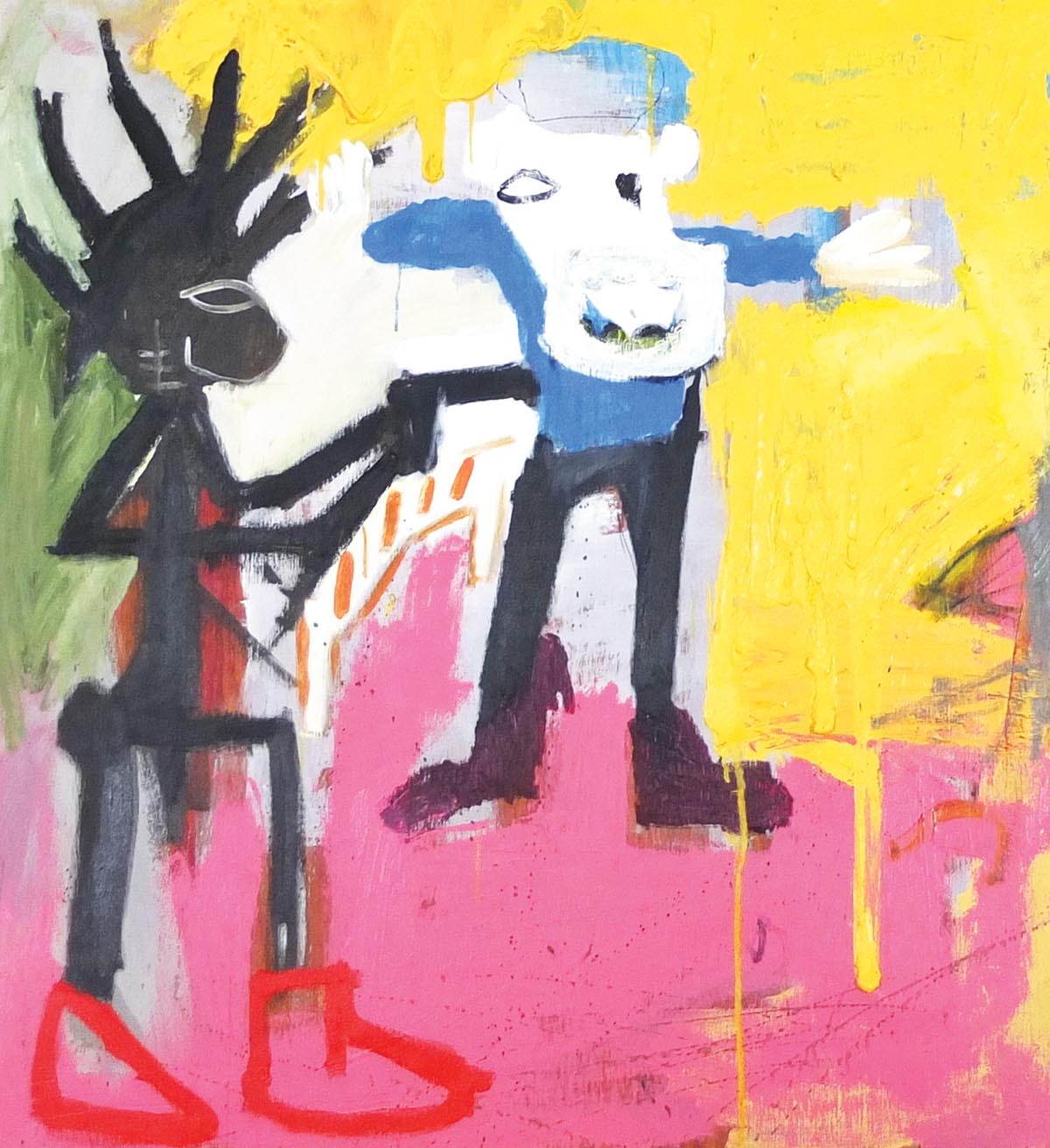 I once asked E’van what drives him to make art about these difficult subjects. “I’m driven to do it because I’m still susceptible to being a victim of this,” he said. “I can be pulled over at any time and get my brains bashed in. I’ve been in those situations. For student artists, we don’t have anything to lose anyway because we’re out here living it. So we’re talking about it. I risk it all to make a damn change. I can’t help it.”

Many of the works portray black men as savages with cartoonish enlarged facial features. Black Myth#2/Wanted shows a wanted poster of a grotesque, barbaric figure with pitted black skin. Its eyes are red rimmed. Its large nose is a snotty yellow-green. It bears its teeth, its lips red as if with blood. It’s a mug shot of a boogeyman that is reminiscent of the way Darren Wilson described Michael Brown before he shot him: as a demon, big as Hulk Hogan, who “made a grunting . . . aggravated sound.”

In CNN Saw It All, two brown figures–one masked, one faceless—lock guns while a video camera rolls, shining a light on the action. Here, he dramatizes the nightly news, prompting us to imagine a newscast where black men are portrayed according to the associations of white consciousness: anonymous and without individuality, killing each other in the ghettos. Each work is an assault on the deeply held and often denied racism in Americans.

“I’m driven to do it because I’m still susceptible to being a victim of this, so we’re talking about it. I risk it all to make a damn change. I can’t help it.” 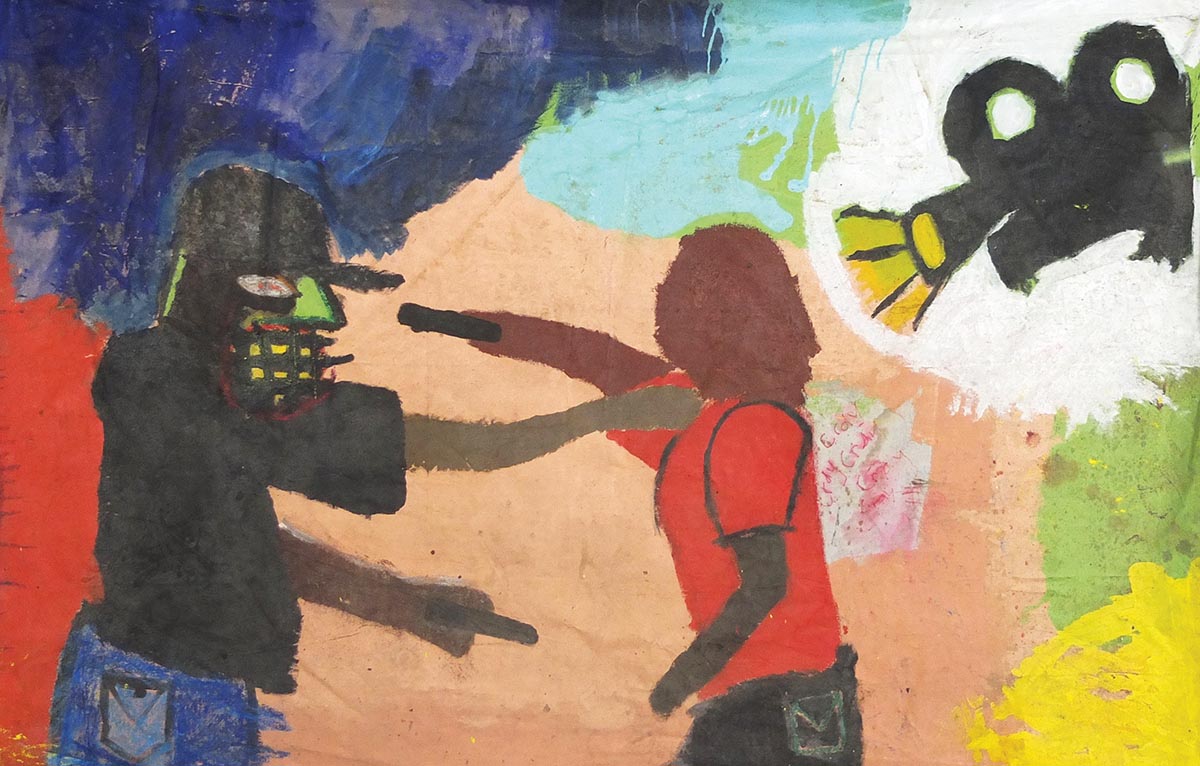 Similar images abound in E’van’s work: chained prisoners walk in line like slaves; a bug-eyed youth raises his fists to fight; a brown Eraserhead-like baby with a high pony tail the color of fireball gobstoppers holds its pregnant belly and wails. Laced within all of this are some of E’van’s other recurring themes: dollar signs, McDonald’s, Coca-Cola, and cars. Things We Die For is divided into four image quadrants: a lone Air Jordan sneaker, a cheeseburger, a car, and a hilariously Picasso-esque Benjamin Franklin. These hallmarks of consumerism (with a touch of history, just for fun) are part and parcel of racism for E’van because they are linked to poverty. “There’s a McDonald’s in most lower-income areas, similar to liquor stores,” E’van says. “On the other hand, a highly recognized brand like Jordan becomes an almost religious fixation that carries its own crime wave around it, where people are prepared to kill for it. Again, it’s largely seen in impoverished areas.” Presiding over the whole show is American Gothic, a depiction of a huge American flag, starless and darkened by figures that have been painted over. 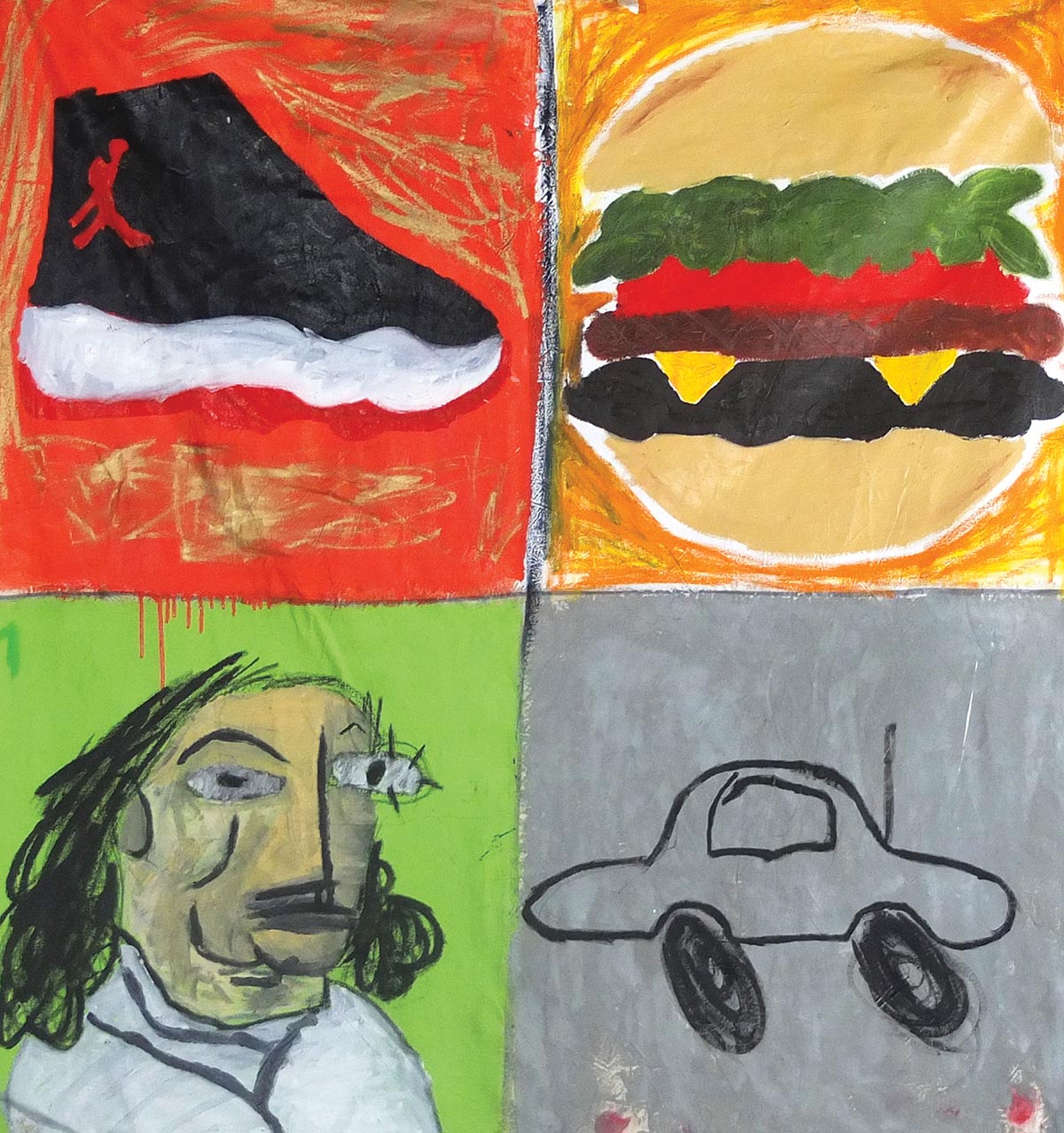 As much as the exhibition is an indictment of racial profiling and consumer culture, it’s also a castigation of our complicity as passive “viewers” of racist practices. How many of our observations about racial justice are as passive, as unchallenged, as the experience of walking through an art gallery on a Friday evening? And what will it take to shake us out of our comfort? 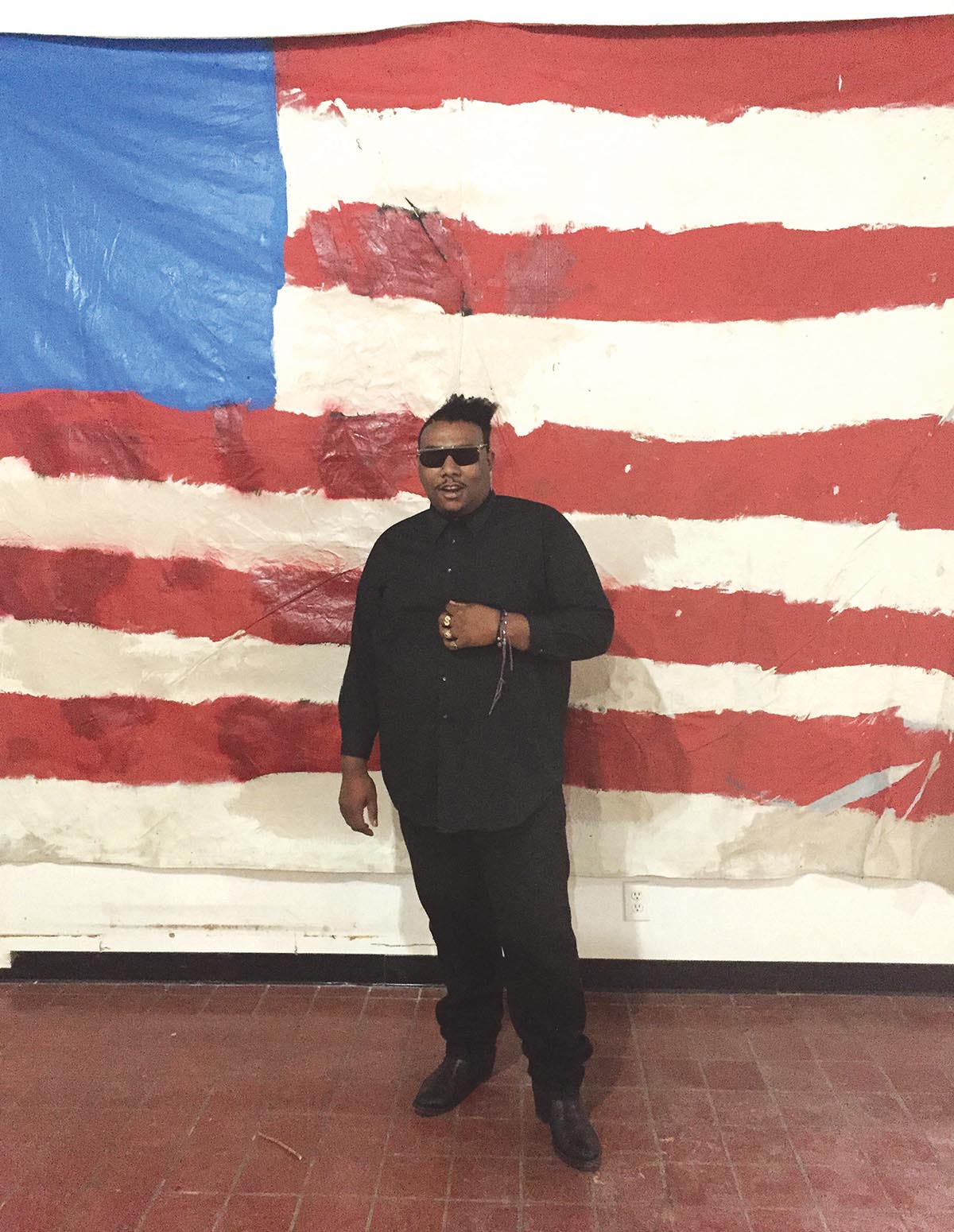