For nine years during the Vietnam war, Colonel Floyd James Thompson was held prisoner of war. When he left for war, he had three children, and his wife, Alyce, was pregnant with a fourth. It is the tragedy of Colonel Thompson and his family’s experience, first while a prisoner of war, then as a veteran trying to reassimilate into society, that is the topic of Tom Cipullo’s Glory Denied being produced by Nashville Opera this month. 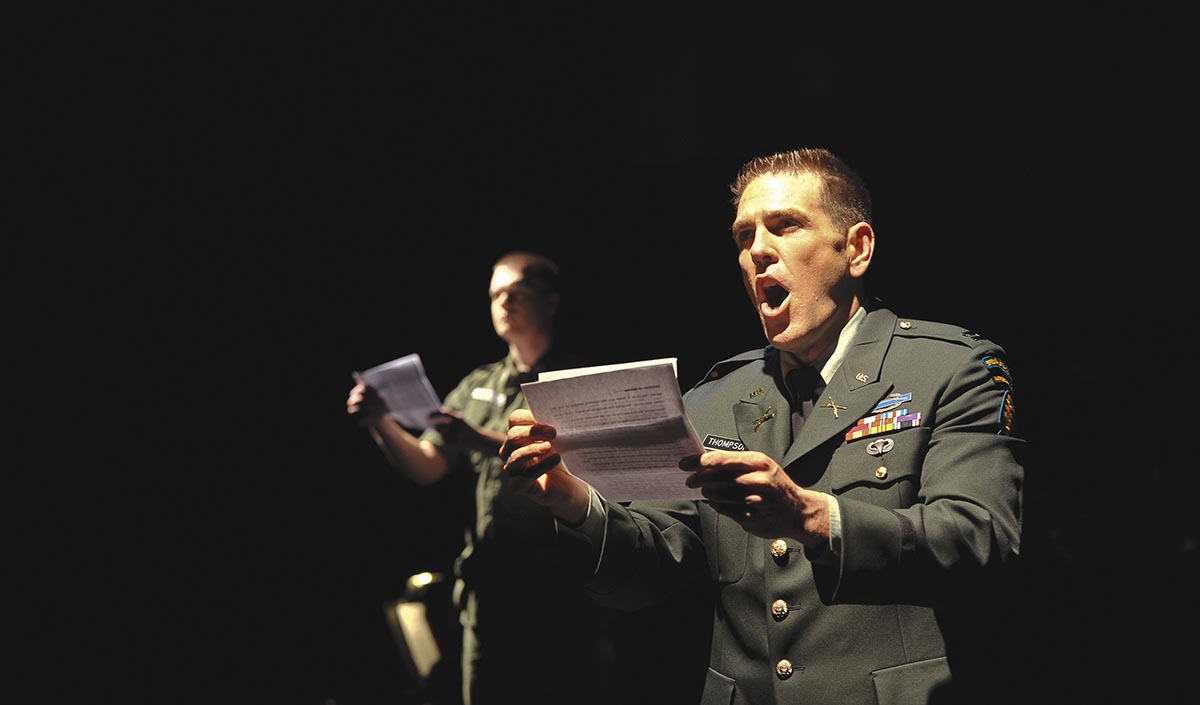 Cipullo adapted his libretto from Tom Philpott’s oral history, which was collected for a 2001 book of the same title. Thompson, who died in 2002, did not approve of the story, likely because Philpott’s text also provides Alyce’s side and complicates any potential for a heroic narrative by humanizing her actions. Thompson’s idealization of his marriage, a necessity of his circumstances, and the tension it creates with his wife’s actual life, becomes the central moral ambiguity that drives the plot.

As Cipullo states: “Colonel Thompson is, in a very real way, a remarkable hero—but he is a flawed one as well. That does not make him any less a hero, but it does make him a human being. The biggest challenge in writing the work was how to make Alyce a real, comprehensible, three-dimensional person. Her actions during Jim’s ordeal were nothing short of shocking. Still, when Alyce sings, her music must be so beautiful and persuasive that people will say, yes, if I had been alone with four children—the last born the day my husband was captured—perhaps I could have done that too.”

Glory Denied is a chamber opera, written for two sopranos, a tenor, a baritone, and a nine-piece ensemble, and Nashville Opera has brought in a strong cast for the production. Emma Grimsley will play Young Alyce, while Rebecca Sjöwall will play the same character later in life. Similarly, tenor Eric Neuville will play Young Thompson, while baritone Michael Mayes will play Thompson later in life. The libretto, however, is not chronological. Indeed, the opera is all the more riveting because of the way its nonlinear narrative bridges time, space, and reality to bring specific moments into heartbreaking juxtaposition.

Cipullo is also well known for his songs, notably his America 1968. Over the summer I had the opportunity to hear the second act’s “After You Hear Me Out” at Nashville Opera’s wonderful Opera on the Mountain program. In both pieces, Cipullo’s vocal writing is marked by an angularity that seems to resolve into moments of extreme beauty, a modernism mediated by intimacy and expressivity. However, according to Cipullo, “Writing an opera is different from composing a song cycle in a thousand ways. In its space, flow, development over time, depth of characterization, inclusion of extended interludes, limitations (practical, budgetary, physical) and grand possibilities, opera is a composer’s siren and fatal attraction.”

Glory Denied can be seen at the Noah Liff Opera Center from November 11–13.