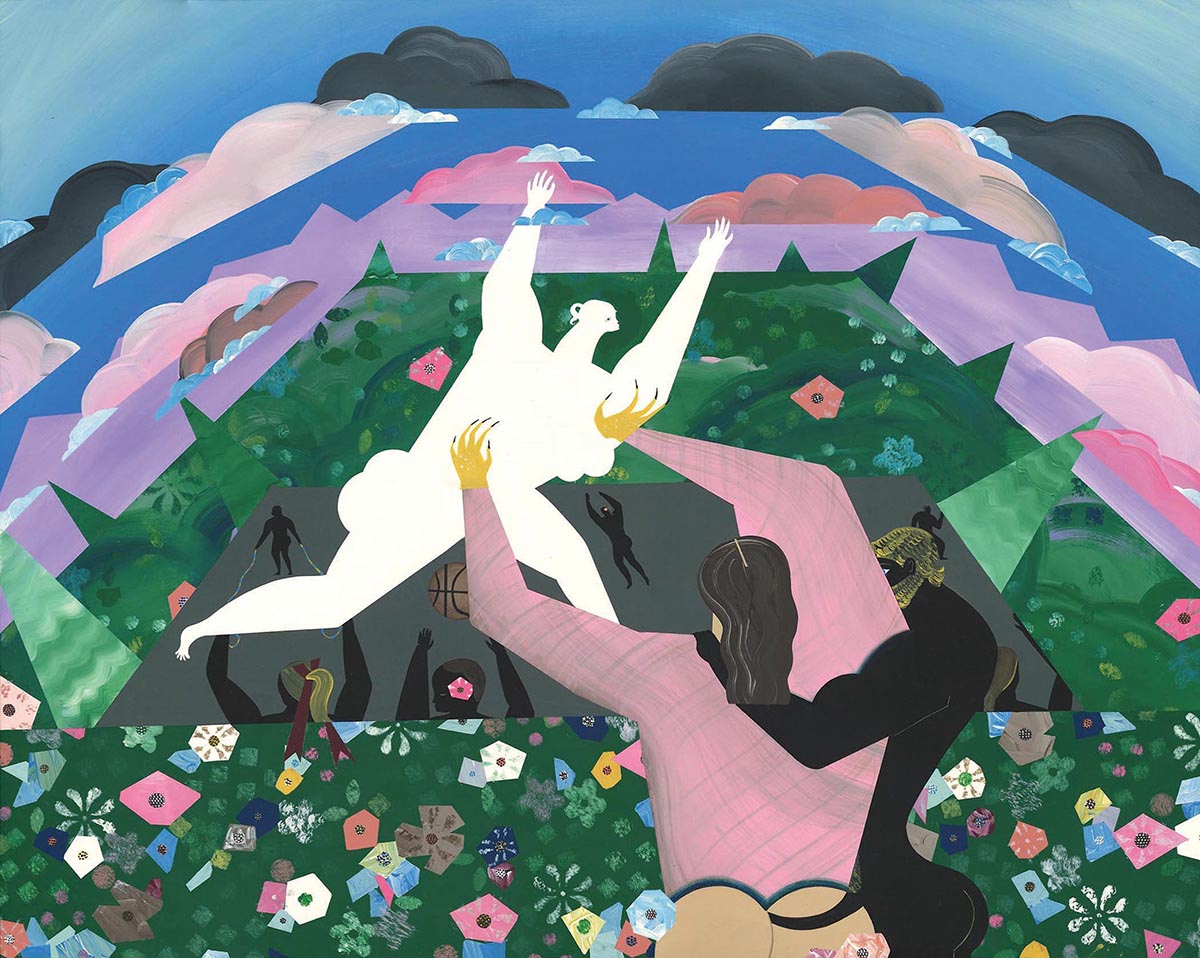 The Adopted Child Lives In A State Of Exile And Often Suffers From Head In The Clouds Syndrome., 2016, Acrylic/pencil on panel, 16” x 20”

“Adopted” is a stigmatized word in American culture. Stripped down to its literal meaning, it is unbiased and straightforward. Wrapped in as many connotations as layers of institutionalized prejudice, whereby pedigree trumps autonomy, however, the simple origin is convoluted and lost. Andrea Joyce Heimer’s The Adopted Child, a body of autobiographical paintings opening this month at CG2 Gallery, is “based on societal presumptions and falsehoods surrounding the temperament, mental state, and character of adopted children,” said Heimer, a largely self-taught artist who was adopted as a baby.

Heimer’s most critical years of art development occurred in childhood and ended abruptly when she was kicked out of high school art class for disagreeing with a teacher. She cites Native American art, which was pervasive throughout her Montana raising, and ancient Greek vase painting—both highly stylized, one-dimensional, and non-verisimilar—as influencers of her work. “I understand the mechanics of how perspective works. I have written graduate-level papers on the history and development of perspective,” said Heimer. “I can explain it to a class, but I’ll be damned if I can make it work in this world that I am painting. This work demands to be organized in this way.” 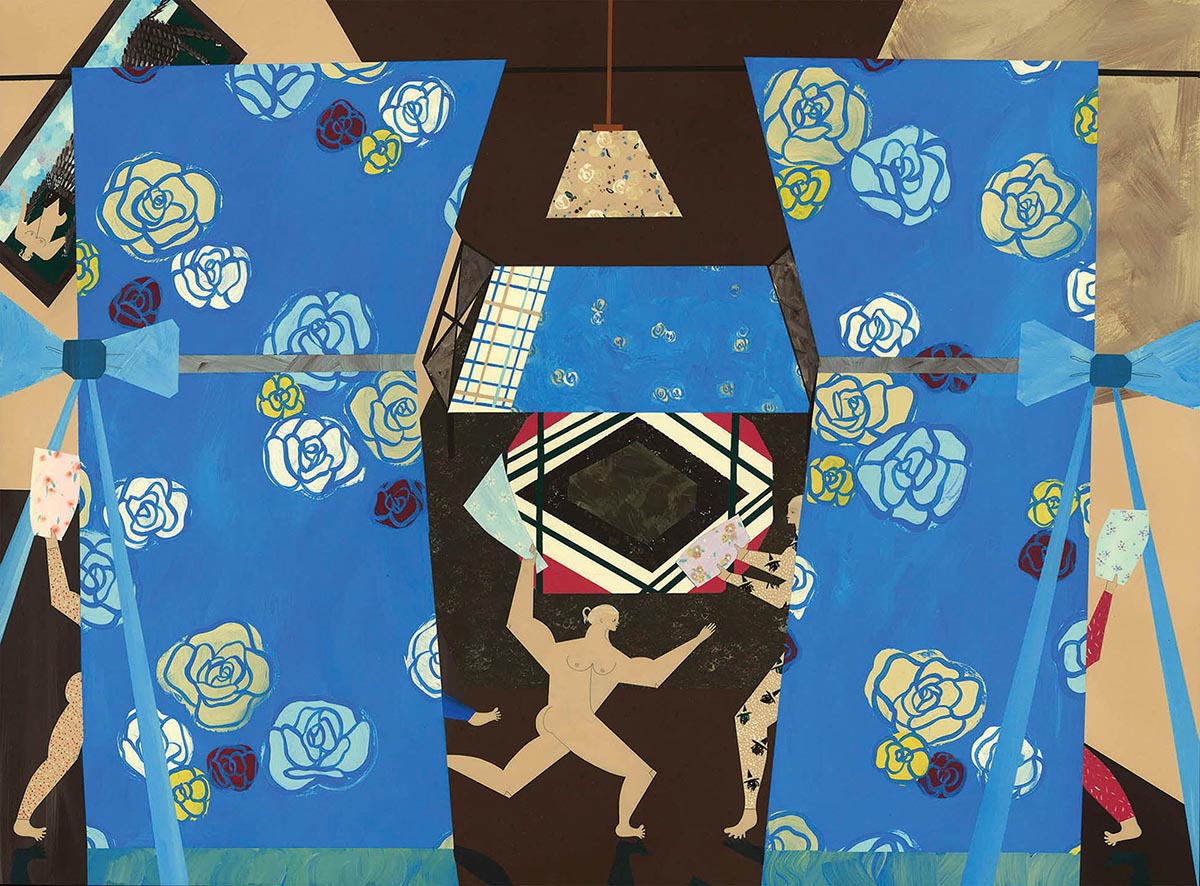 Behind Closed Curtains The Adopted Child Roughhouses And Is Roughhoused Against., 2016, Acrylic/pencil on panel, 18” x 24”

Perhaps it’s her memory that won’t have it any other way: the arrangement of objects in paintings from foreground to background as stacked from bottom to top, rather than receding to a vanishing point. Strips of wild wallpaper-like patterns touch and mimic quilt design. Her spatially flat, abstracted style echoes the presumed flatness of life one experiences with little to no known family history, but also the way the adult mind recollects the past in disjointed vignettes. Many of us wax nostalgic for childhood because we had biological parents and a traditional bringing up and little else to worry about than what we’d get for our birthdays. For Heimer, the situation is different. When you’re an orphan and memories are some of your few possessions, reflection on the past is not always warm.

“I want to examine what happens when a small subset of people is examined through the lens of a collective conversation that happens to them instead of with them,” explained Heimer. Sometimes, she seems to slip into the mode of a detached observer as she interweaves her firsthand experience with the perspectives of outsiders, as seen in The Adopted Child Does Not Know Which Side of History He or She Comes From. 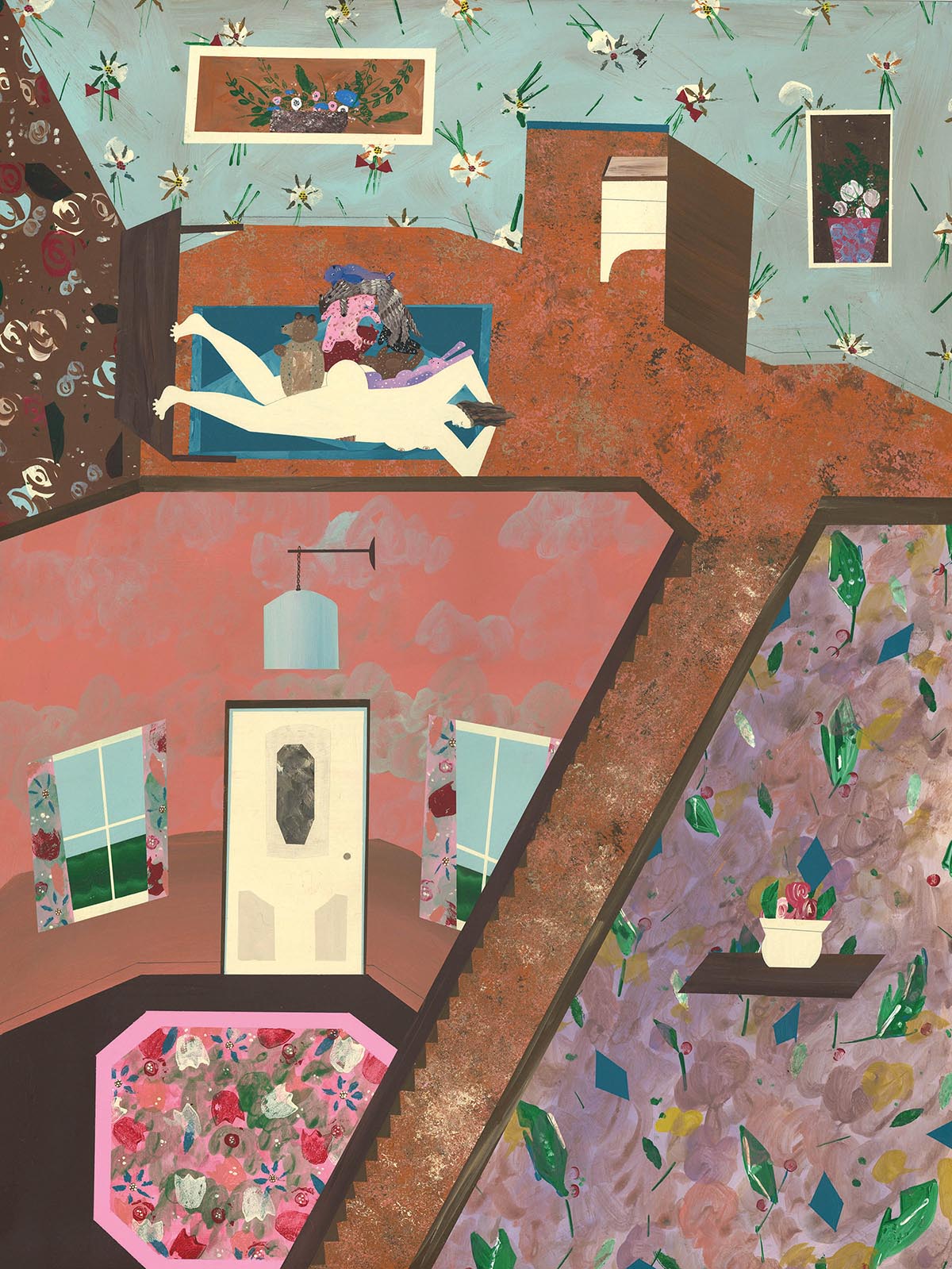 My Stuffed Animals Had Detailed And Complicated Lives Of Their Own That I Had Given Them And When Life Was Too Big I Would Lie Underneath Them And Feel Their Soft Weight On My Skin., 2016, Acrylic/pencil on panel, 24” x 18”

She said, “Some time ago I was paging through this old [child development] book with a section called ‘The Adopted Child,’” of which the points cannot be far off from the titles of Heimer’s works. “The outdated pop-psychology generalizations of how adopted children behave and how they should be treated are issues that persist even now.” The sources informing her work vary from friends, colleagues, doctors, and authors to complete strangers. “Deviancy and detachment have been recurring themes in their comments and, as unflattering as it is to admit, they happen to be some of the stereotypes that ring true in my own case,” Heimer admitted.

By giving form to narratives that are more felt than seen by the public, Heimer chips away at the secretive, oppressive nature of stereotypes. She has unwittingly wrangled political incorrectness to work in her favor; creating outside the academic pipeline has allowed for greater honesty in process and subject matter and in turn greater apathy to satisfy a mainstream taste for formulaic art. With hints of Carroll Cloar, Clementine Hunter, and Kara Walker, Heimer’s paintings remain beautifully uncommon yet channel a familiar childlike quality that renders mature themes of adoption, psychology, and sexuality more palatable and, thus, more understandable to a broader audience. 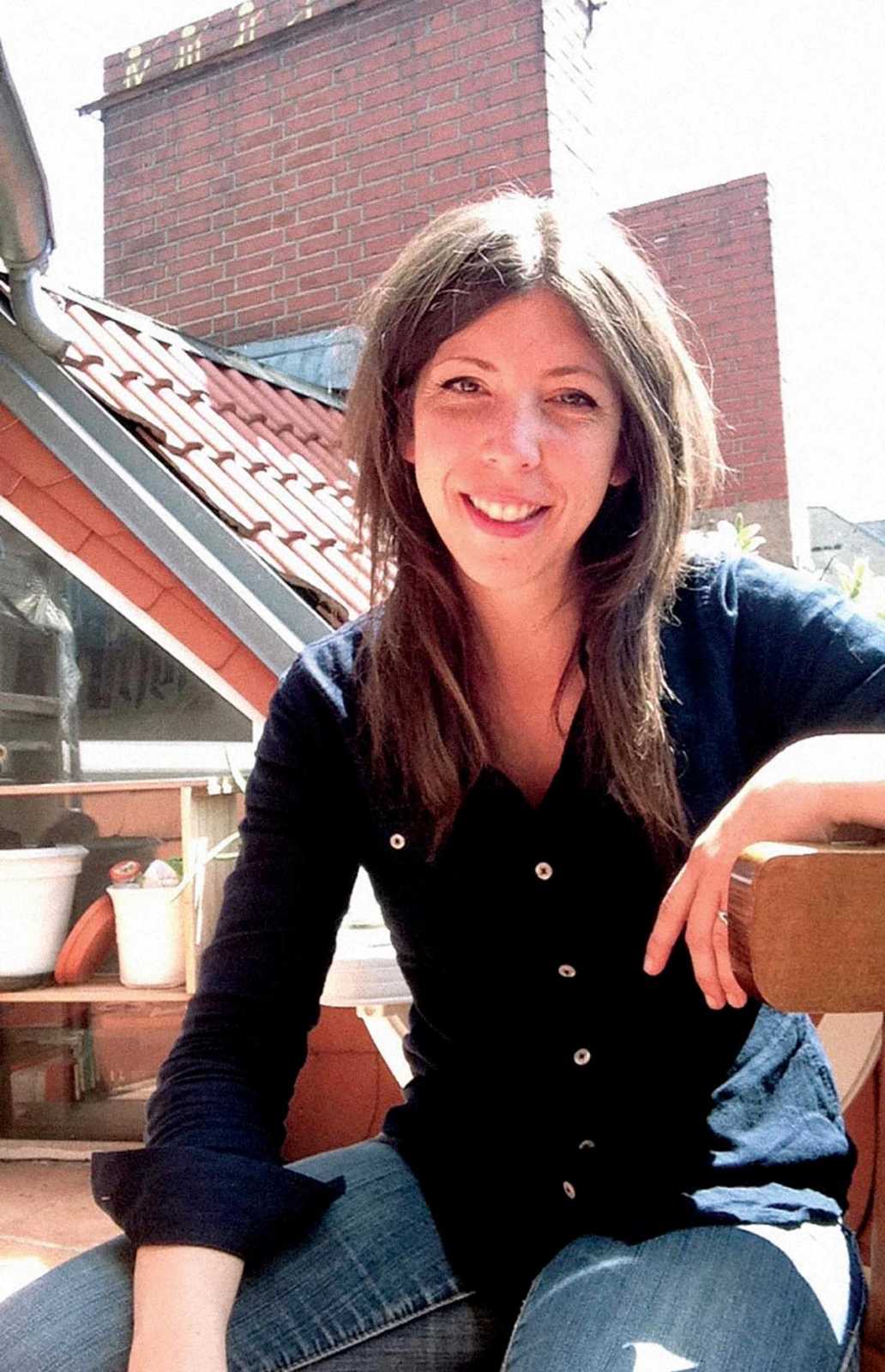