“It is a treat to see these artists’ many approaches to the wonder and quietude of snow.” 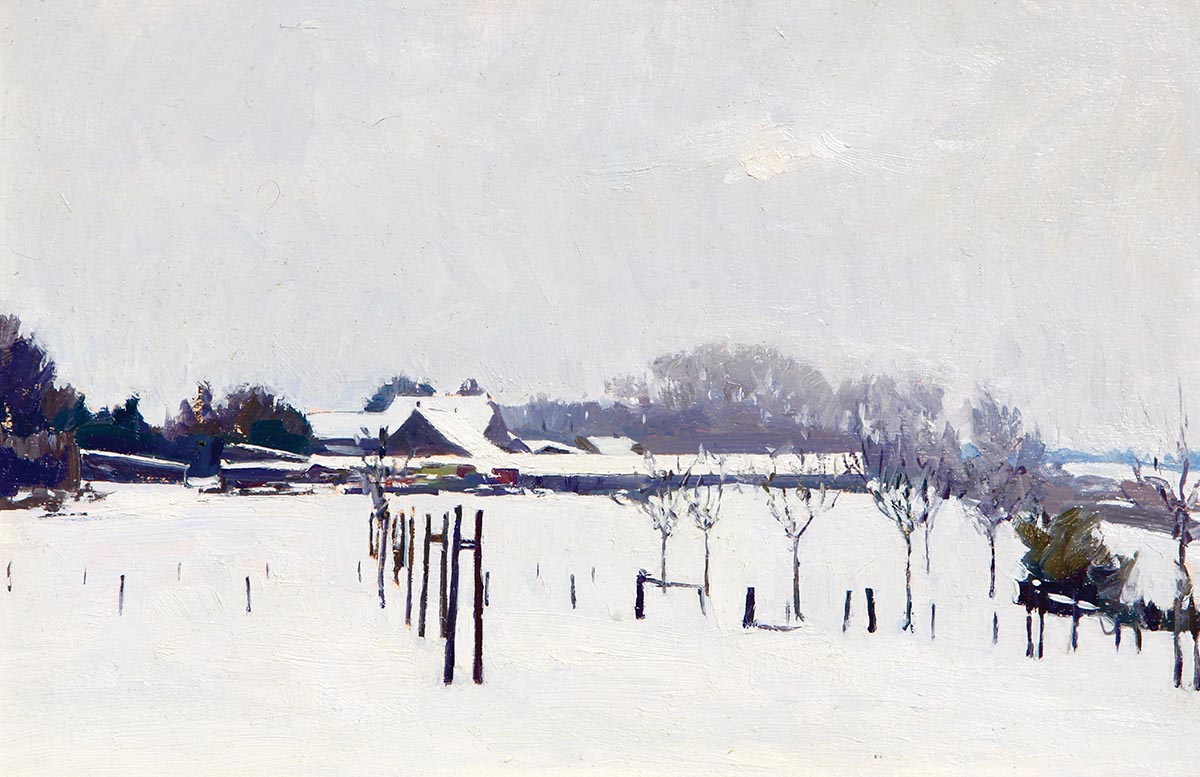 The exhibition of snow paintings at Haynes Galleries is certain to get you spirited for winter and perhaps even feeling goosebumps as you’re immersed in these artworks. Subject matter—the beauty of the natural world under snowfall— unites these paintings that are otherwise separated by the varied artists who created them and the dates of their creation, which span over 70 years. 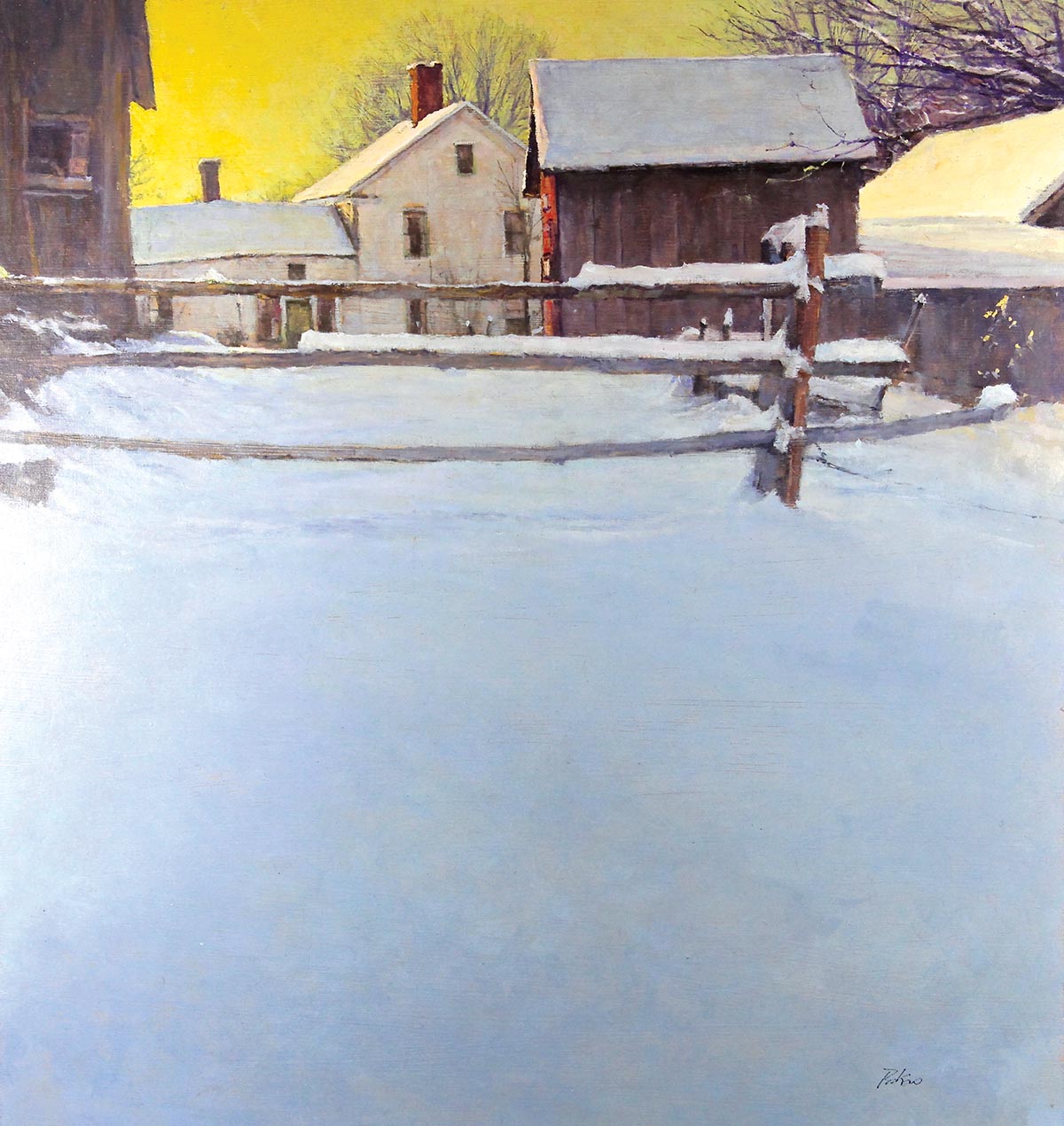 Marc Dalessio and Lynn Sanguedolce seem to capture the weather in action. Both artists have used a looser facture, characteristic of the impressionists who loved to paint en plein air, though imagining an artist actually painting in a snowstorm should give you a good laugh. The ability of Dalessio and Sanguedolce to convince us that they have done so speaks to their talents. In Dalessio’s Snow Scene, the texture of paint on the canvas signals to us the rapidity of snowfall. A hint of blue mixes with the sky’s overwhelming white, and the obscured brown branches of a tree in the background give a sense that many more inches of snow are yet to fall. In a sea of white, snow has obscured the use of this land, allowing only for enjoyment of its beauty. Sanguedolce’s small work is compositionally more innovative. The hillside that dominates the right half of the canvas segments the scene in a way atypical for landscapes. Her use of color is indicative, too, as hints of autumn colors peek through the hillside to suggest the season’s first snowfall. 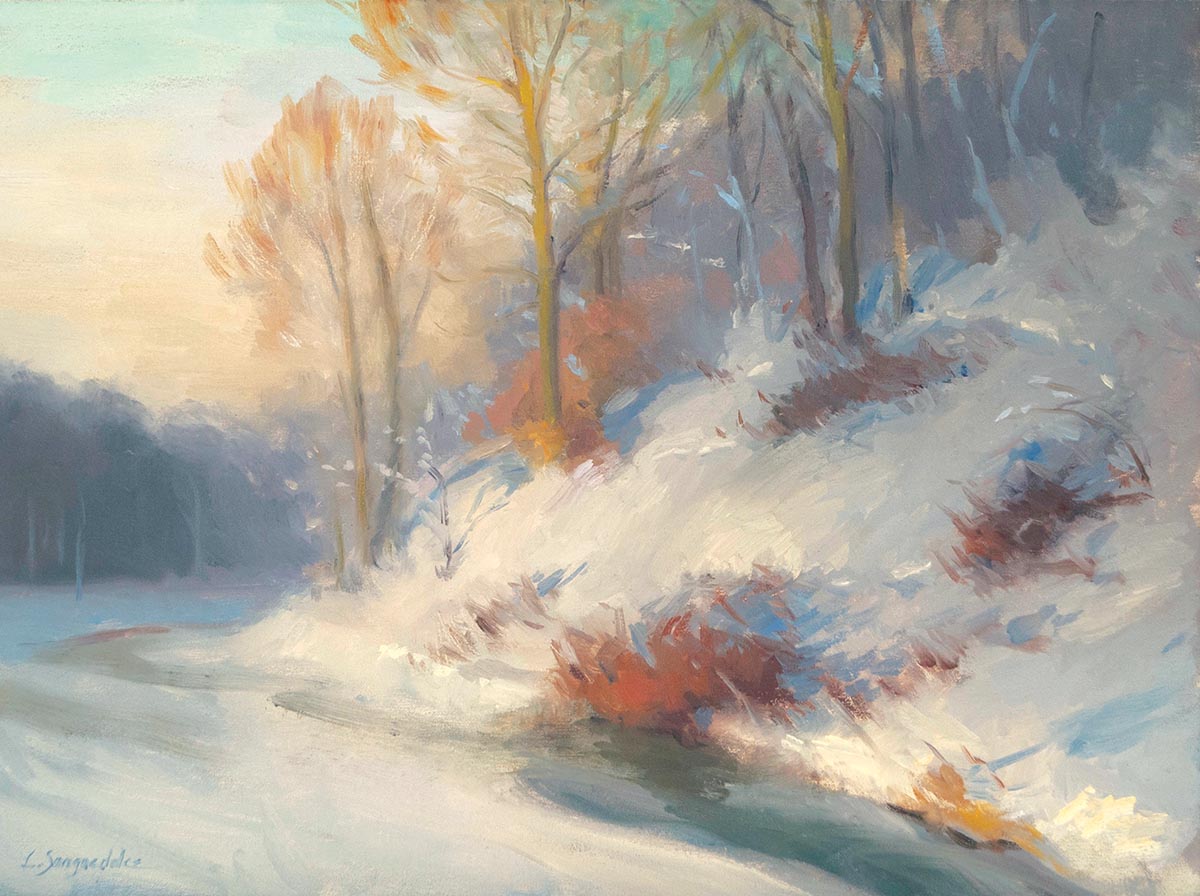 The works by Emile Gruppe and Andrew Wyeth are older, dating from midcentury. Gruppe’s deep snow in the forest is likely a scene in Massachusetts. The trees leap up in the foreground and guide our line of sight straight to the pop of blue sky, and we are close enough to see tree species delineated by changes in bark and trunk color. Wyeth uses a similar technique of a tree in the foreground, though here it is simply a few branches on the left side, a funny interjection leading us to wonder about the area surrounding this scene of a farm (likely in his home of Chadd’s Ford, Pennsylvania). It is unusual for a snow scene to be painted in watercolor, though it was a favorite medium of Wyeth’s, and it offers an opportunity to think anew about texture and medium in depicting a familiar phenomenon. 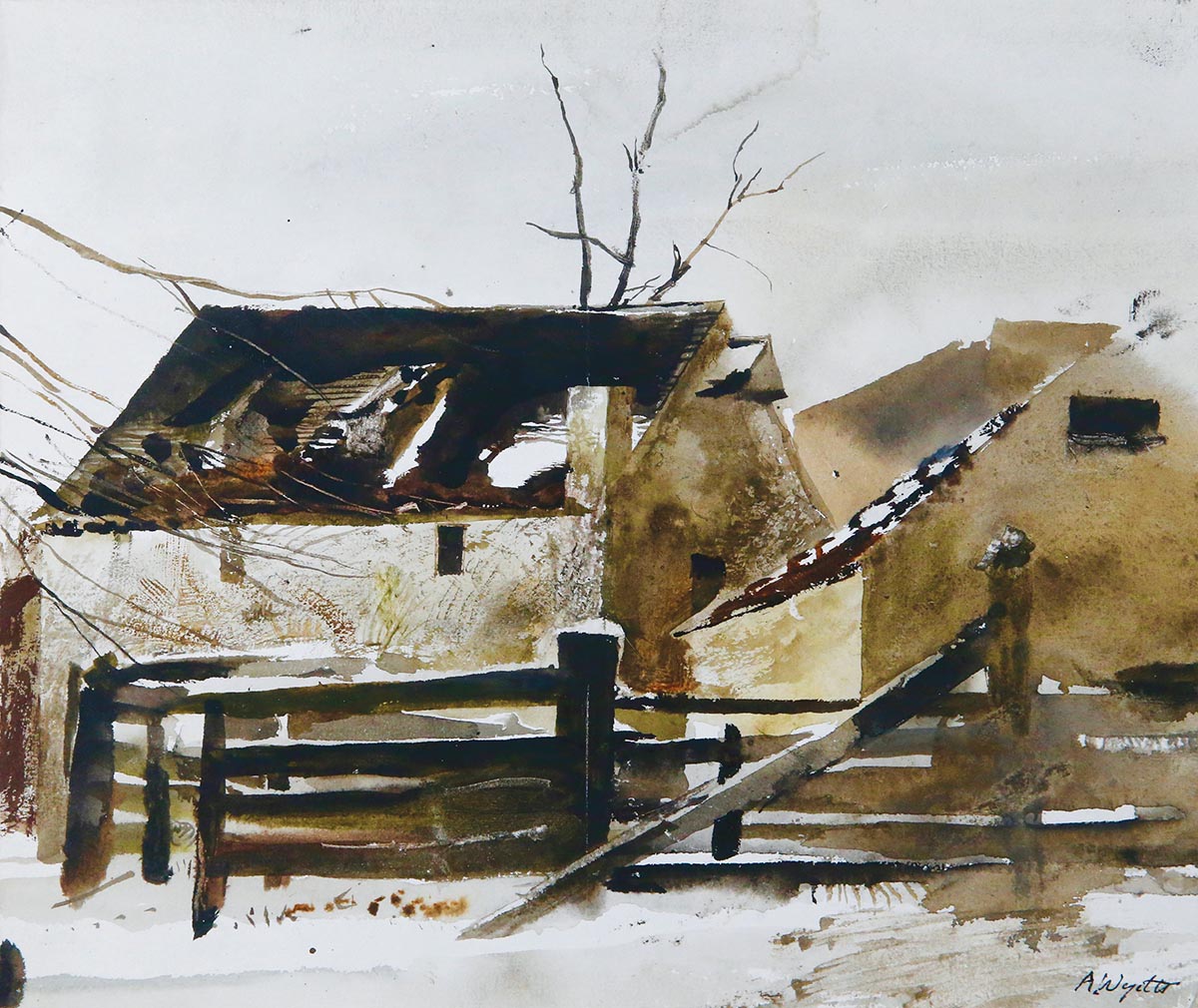 Other artists capture the tail end of winter, when the snow lingers but grass peeks through under a warm sun, and water bubbles out from under ice. Peter Poskas’s Snowmelt, Andros Farm, Washington, CT, is a quiet scene of rural life where strong sunshine and melting snow signal the promise of a new day and the new life of spring. We can imagine the feeling of crisp air under a hot sun and almost hear the snow dripping from the trees and eaves of the farmhouse. T. Allen Lawson’s Wilbur and His Ladies, while a peaceful scene of barnyard coexistence, is far less still, as the donkey munches on and chickens peck at their meal. Cindy House takes viewers to a more secluded space with Stream in Mid- Winter. The dappled light in shades of blue, gray, and white in the foreground illuminates the changing seasons, as the snow melts and the water of the gently curving stream finds its outlet. Though the vegetation still signals winter, verdant evergreens in the mid-ground brighten this scene. 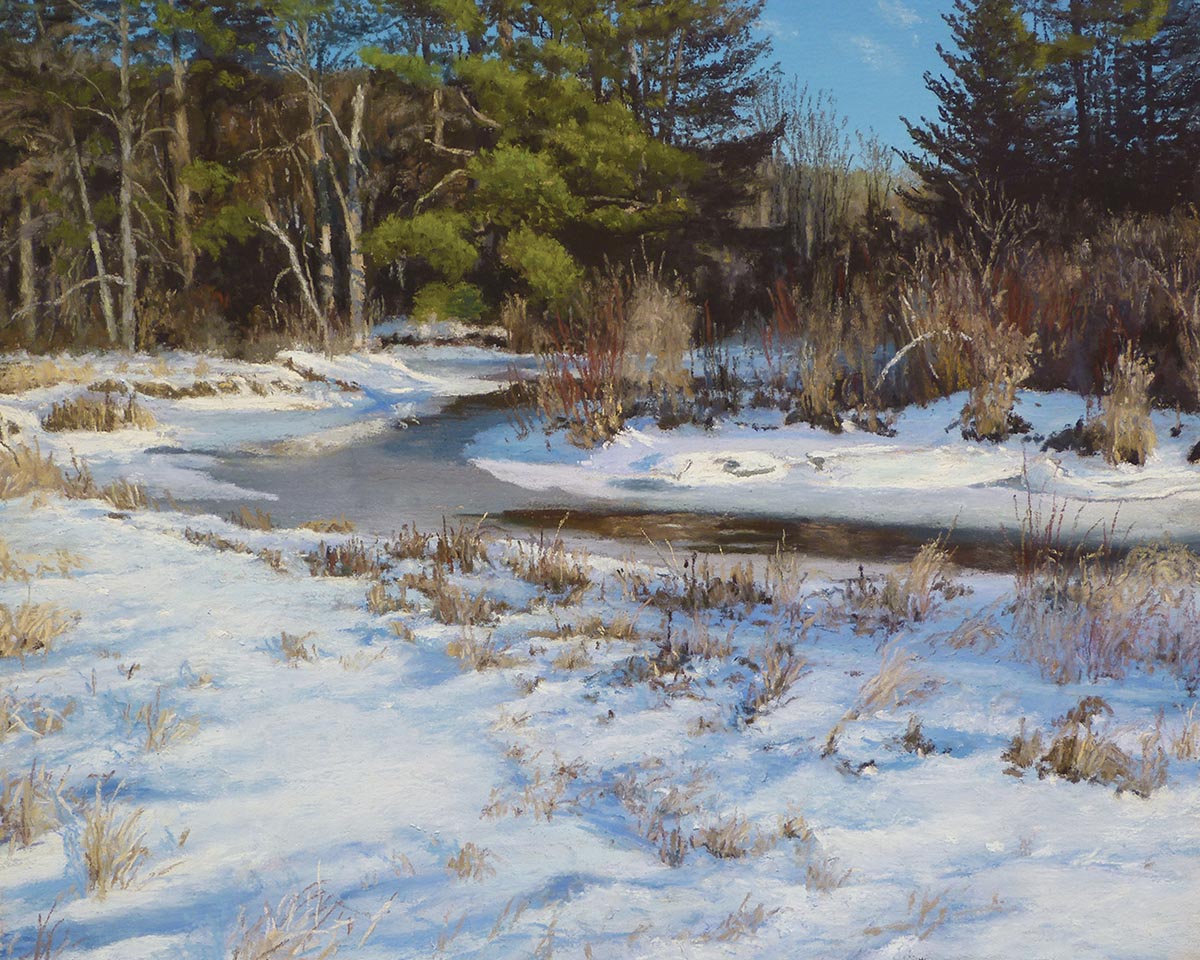 Two works fit less easily into a traditional landscape narrative. Holly Bedrosian’s On a Crisp Day shows a young woman outside on a chilly but refreshing day, signaled by the title and also the hint of pink on her nose and cheeks and the top of her heavy coat hanging over her right shoulder. The looser brushwork on the trees in the background plays against the precise realism with which Bedrosian renders the subject, creating motion as we view the painting. Snow has a way of creating a sense of timelessness, blanketing signals of the modern day in white. The only details reminding us that this woman was painted in 2015 are her knit cap and the design of her coat. With In the Shadow of the Towering Peaks, David Wright has created an intriguing scene. Is its primary subject the majesty of nature seen in the towering peaks and evergreens or the moment of old meeting new as a cowboy approaches a Native American camp? This seemingly significant encounter foreshadows the future of this Western land but literally sits in the shadow of snow-covered mountains. 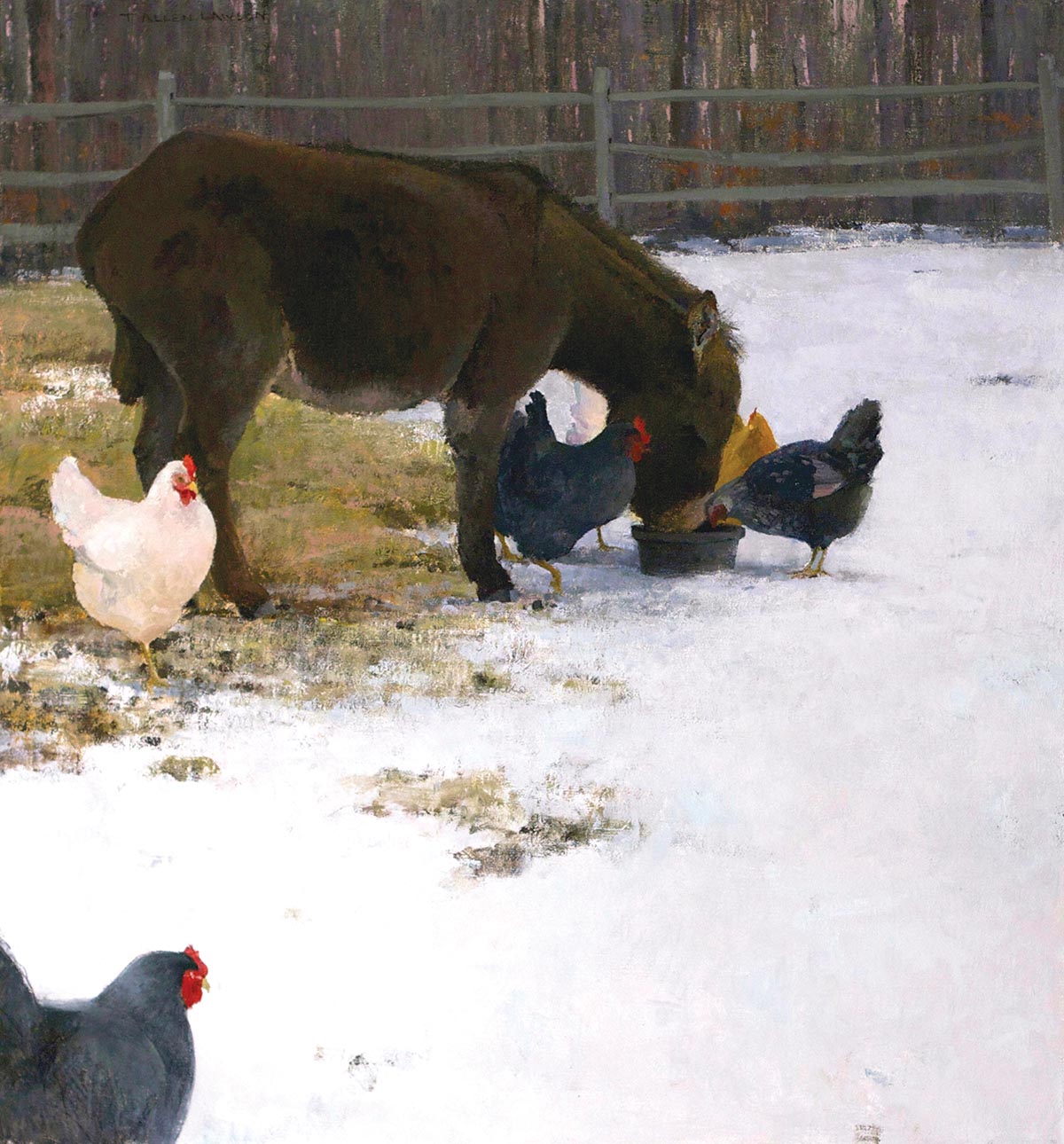 It is a treat to see these artists’ many approaches to the wonder and quietude of snow. Whether capturing the fluster of falling snow, its melting into the hope of spring, or the relationship of man and animal to nature’s constancy, the paintings at Haynes Galleries’ winter exhibition this year are sure to delight the eye and ignite the joy encapsulated in a pristine blanket of winter white.

See these and more winter scenes at Haynes Galleries through January 28, 2017. For more information, visit www.haynesgalleries.com. 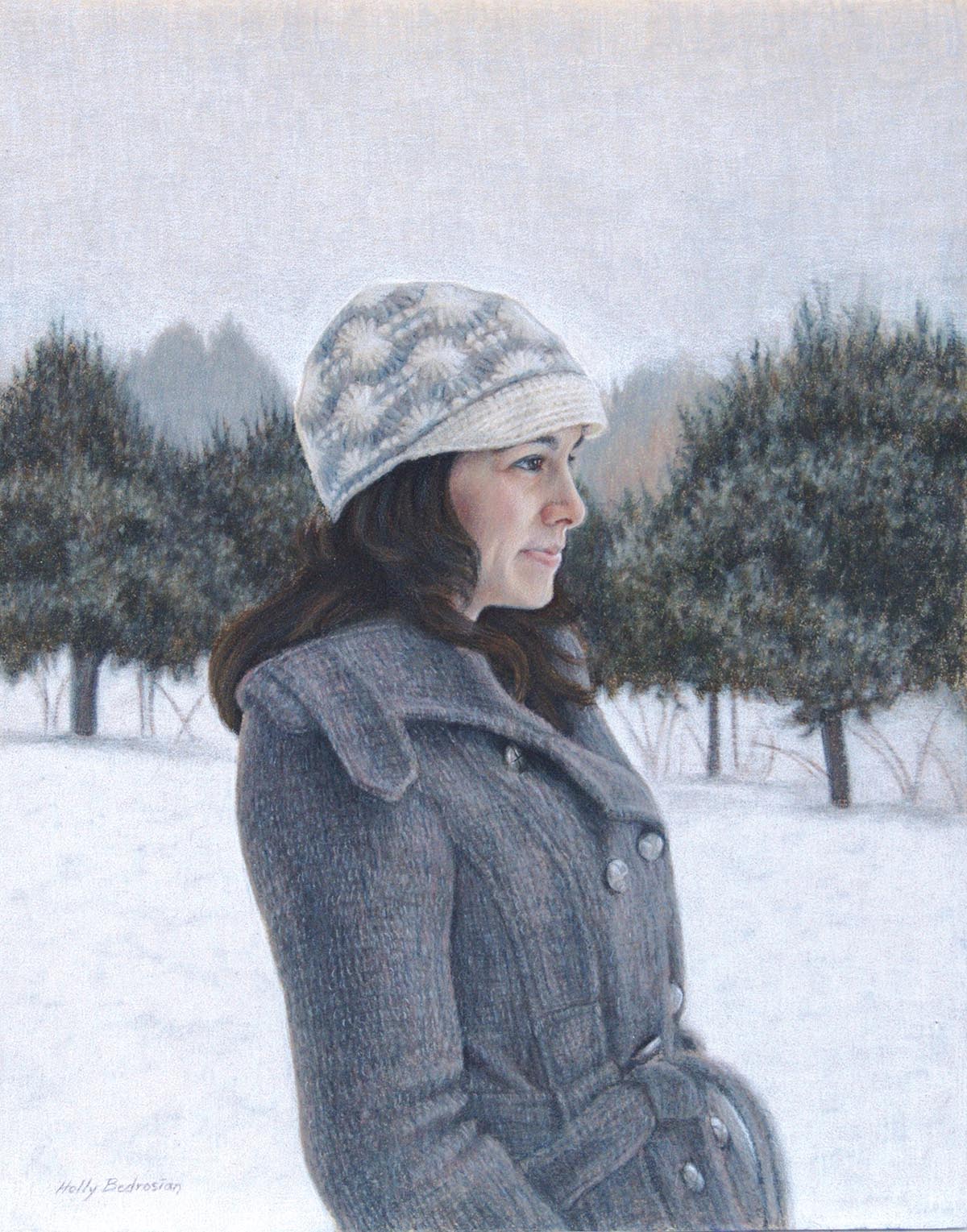