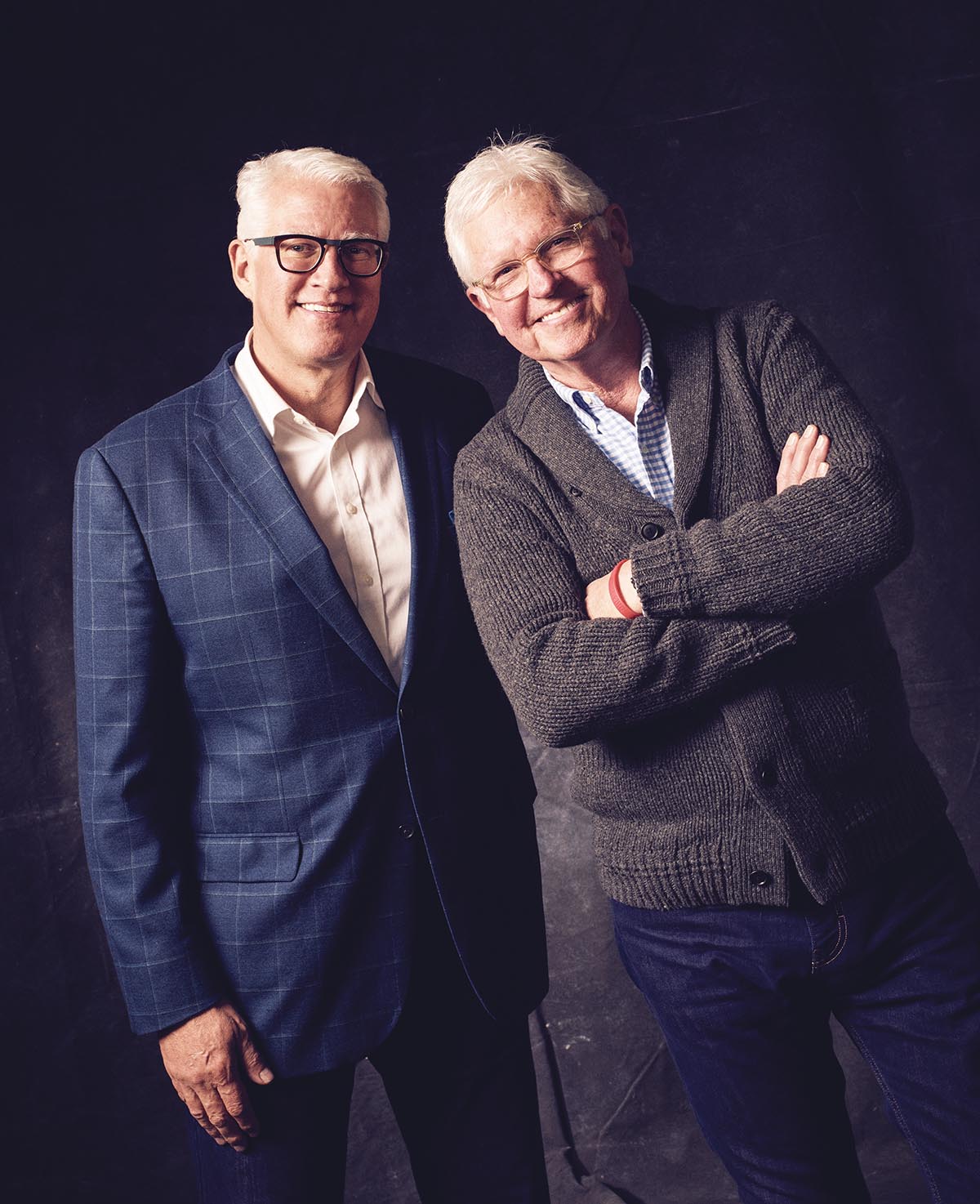 The historic house in the Richland-West End neighborhood dates to 1810 and is one of the oldest in the Nashville area. It is picture-postcard perfect, manicured but welcoming. The kind of place you drive by and wonder who lives in it and if you would ever get an invitation to dinner there. Inside, Allen and Steve, a dynamic duo by any definition and a couple for the past thirty-eight years, have built a home that is as refined as it is comfortable. Period furnishings and appointments blend seamlessly with local contemporary art. Both successful in their real estate and garden design careers, they are committed to community involvement and have hosted and chaired numerous fundraising activities that have benefitted our art and educational institutions. On a frozen January morning I sat with them and their two greyhounds by the crackling living room fire. Steve mentioned that Allen likes to cook and I, of course, mentioned that dinner invitation…

What is your greatest extravagance?

AD: Travel. We love France and go there often.

SS: It’s really not that expensive to go. New York is more expensive. We just celebrated Allen’s sixtieth birthday in Paris with seventy-five friends. I also like to collect old hand-forged antique silver.

SS: To go to Japan and see the wonderful gardens there.

What’s your idea of a perfect evening?

AD: Dinner at the house with friends.

SS: For two or twenty-five. He loves to cook. A perfect evening for me is to go to the symphony. It’s a treat.

How did you get involved in the Nashville art scene?

SS: We were cast into the Nashville art scene early on because of people like Walt and Mary Schatz and Carol Stein. I was on the Nashville Cares board for many years, and Allen and I both chaired their silent auction. We also had all the thank-you parties for Artrageous here at the house. That exposed us to a lot of Nashville’s great artists.

AD: Artists are always asked to donate their work to art auctions, and we wanted to do something that gave back to them.

So who are some of your favorite artists?

SS: One of mine is Anna Jaap. We have a lot of her work from different periods. And Kelley Estes, beautiful art and sculpture.

How does Nashville stack up culturally to other major cities?

SS: I think it’s more hidden. It’s here but you have to find it. It’s not in your face yet.

AD: I think Nashville is surprising to people. I relocate many people to Nashville and I know they come with many preconceived notions of what this city is about, and they are always surprised by what they discover.

SS: One of the largest surprises is the Country Music Hall of Fame. We’ve introduced people from all over the world, and they all love it there.

AD: For a city this size we are so lucky to have a great symphony, opera, and ballet that are not on the endangered list.

What do you think of the explosive growth of our city?

SS: It will probably continue for a while longer. I do hope that all the young people who are moving here get involved with our communities and continue the philanthropic thrust that makes this a great city.

AD: This is a good time for Nashville. We haven’t been through big boom or bust cycles. And we’ve had four fabulous mayors that helped make that happen—Bredesen, Purcell, Dean, and Barry.

A living person you most admire?

AD: I think highly of Steve.

SS: How nice. Claire Armistead. She’s just made it all happen and holds her head up. She has it together, philanthropic, enjoys people . . .

SS: And Hillary, I’m not sure how all those misconceptions came about. A tremendous doer and believer in people.

Who would you like to have a long conversation with?

AD: Barack Obama. He has accomplished a great deal in the last eight years. I think he has been misunderstood and treated a little unfairly. He broke a lot of barriers.

SS: He is the most intelligent on his feet speaker we’ve ever heard, certainly in my lifetime.

The last great book you read?

SS: America’s First Daughter by Laura Kamoie and Stephanie Dray about Patsy Jefferson. I want to read it again.

AD: Funny Face. We showed it at our fundraiser for the Friends of Chantilly where part of the movie was filmed.

What is your greatest achievement?

SS: Allen’s greatest achievement is being kind to people who move to this cIty. He is an ambassador for Nashville, he’s the Pied Piper.

AD: Dogs and children always come to me first.

SS: When the Garden Club of Nashville elected our garden for the Archives of American Gardens in the Smithsonian. That was really an honor.

SS: Play the piano. I took lessons but didn’t have the brain for it.

So what music do you like to listen to?

SS: All of it. I love classical and standards. New and old music.

AD: I’ve gone back to appreciating bluegrass. Parts of that really speak to me.

AD: I’m really big on neighborhoods and preservation and community and the environment, and I won’t retire from that, ever.

SS: And I’m on the foundation board for the Historical Commission, and that is a new concern, preserving our history.

AD: I think we’ll always be involved in the community. If you live somewhere you have to be involved.

What would surprise people to know about you two?

SS: That we are both very private people. We attend so many functions, which is fine . . .

AD: But we like to be here at the house with our dogs.

What would you grab if the house was burning down?