The Rymer Gallery through April 29 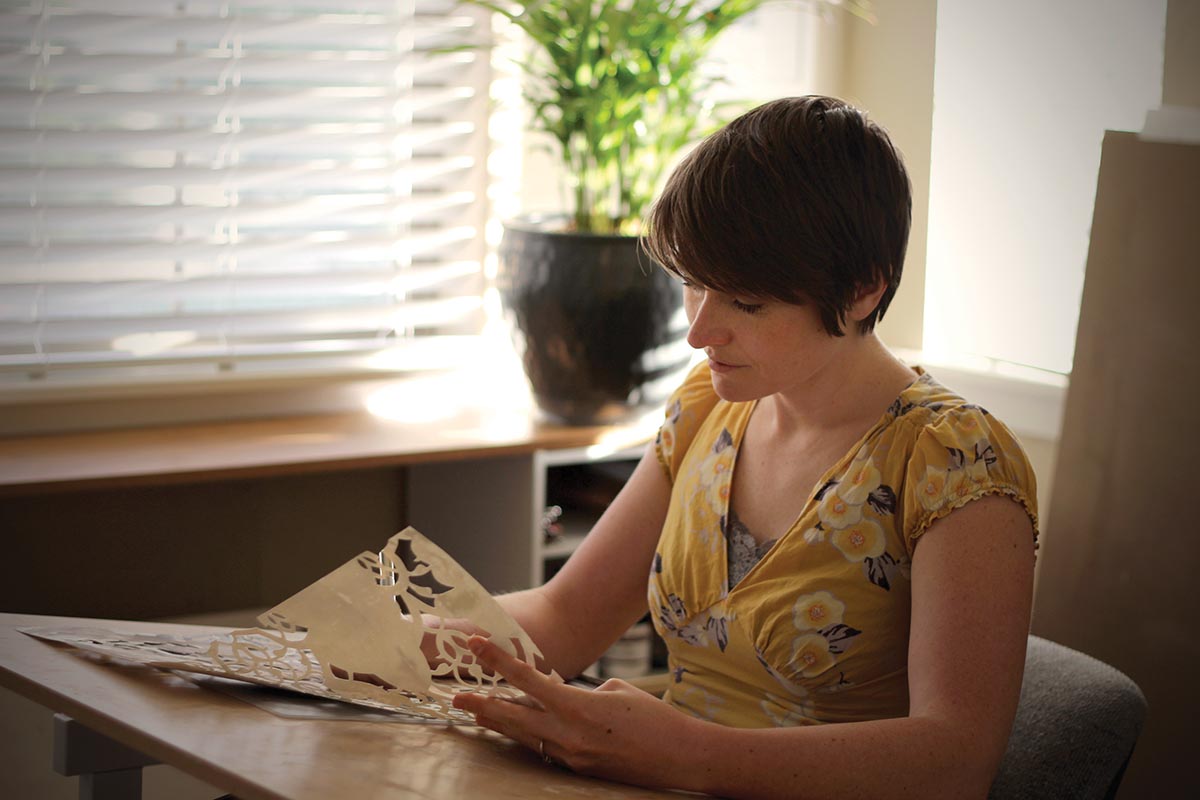 Wehle’s works are intimate, ephemeral, embodying her love for the fragility and malleability of paper. 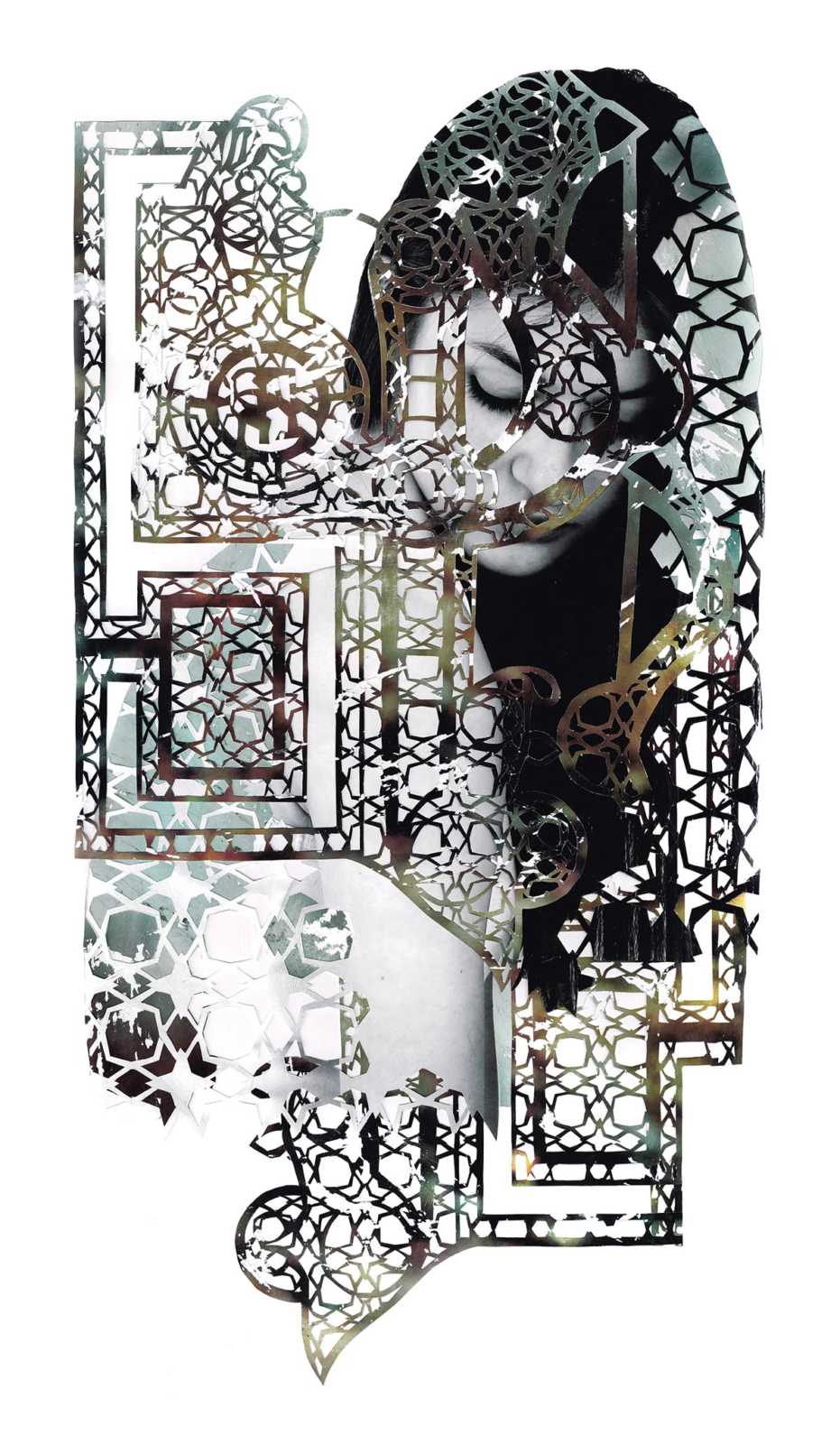 Elaborate stone carvings and ceramic tiles cover the Alhambra palace, where ornamentation is taken to a cosmic extreme. There in Andalucía, Spain, is where artist Elise Wehle became captivated by the intricacy of Moorish design. Her artistic focus shifted, and she began incorporating dense repeating patterns in her own works on paper, a selection of which can be seen at The Rymer Gallery through April.

Raised in California and now living in Utah, Wehle has been heavily influenced by her travels in Europe. Her art pulls from a range of source imagery, riffing on divergent and at times contrasting themes of History, Femininity, Religiosity, the Urban, the Pastoral. But the underlying, unifying thread that runs through all her work is the interference of the image by geometric design. Repeating visual patterns are hypnotic, and humans love them, are drawn to them, always have been. We cover the floors of palaces, the ceilings of temples, the pages of manuscripts, our clothes, our walls, with rhythmic geometric arrangements to soothe our minds even as we excite our eyes.

But what, exactly, calms us amidst the structured chaos of repetitious motifs? Is an innate desire for order satisfied when we see a design reliably and perfectly repeat itself? Or maybe it’s a recognition of the molecular structure of the universe, built on tessellating forms. Perhaps it’s the divine, or a sublime perfection to which we aspire that compels us to embellish things with complex patterns. At its most raw, base level, it is certainly true that geometric designs are simply fun to make and pleasing to see. 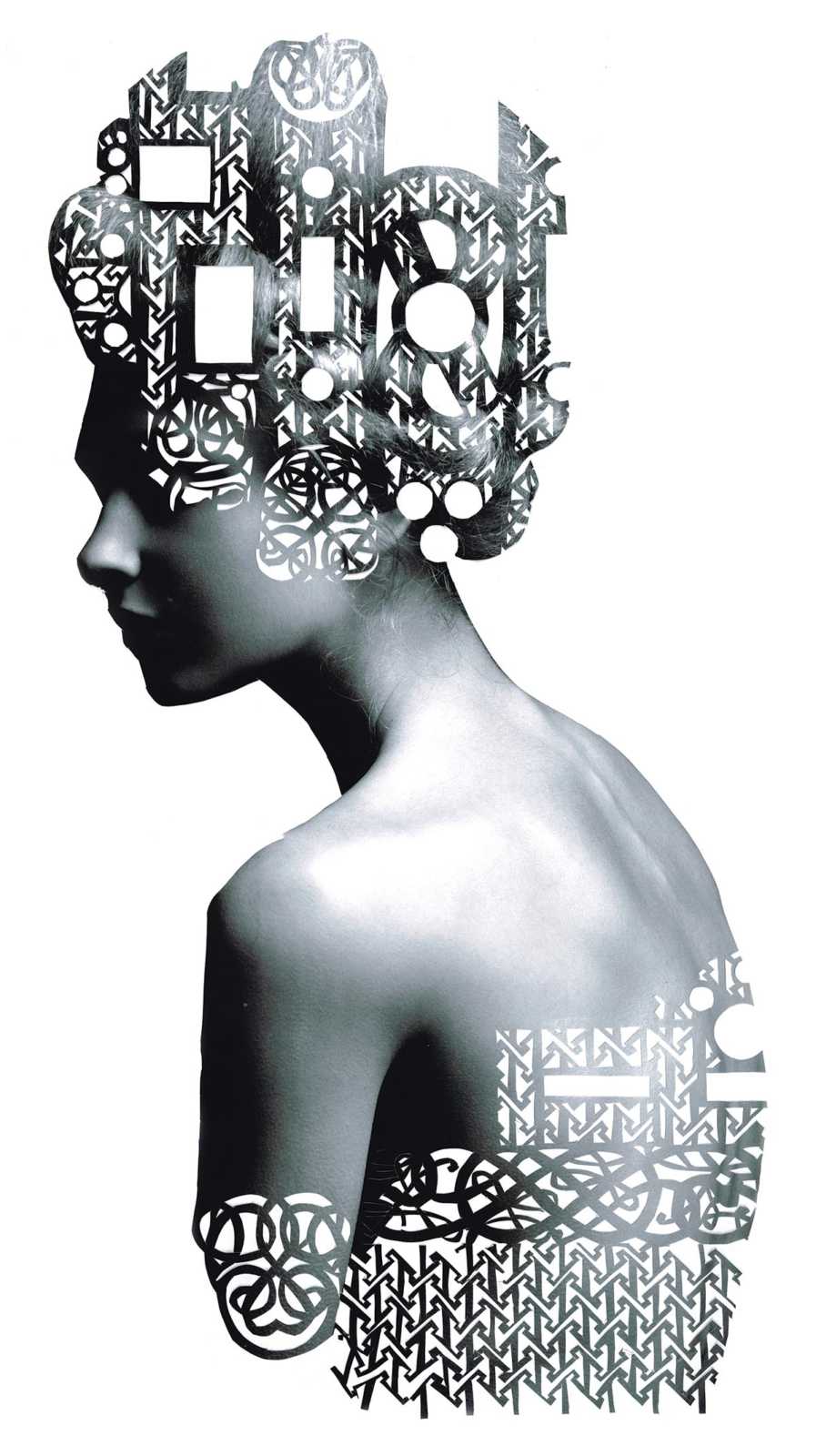 Unlike adorned stone arches of temples, Wehle’s works are intimate, ephemeral, embodying her love for the fragility and malleability of paper. In these domestic-scaled works, photographs are either cut directly or overlaid with cut paper. The result is a lacy, delicate layering of representation and abstraction where patterns both obscure and reveal the image. “My hope for those artworks was that both the single moment captured by the photograph and the protracted amount of time represented by the pattern could complement and contrast each other.”

Though the seduction of repeating patterns is in itself implied perfection, Wehle embraces her own imperfections—the overcuts, the slight variations, despite her best efforts. She does not want them to look mechanical, but to reveal the human hand, and there is a resulting tension in her work between the mechanically made and the handcrafted.

Wehle is also influenced by illuminated manuscripts like the Book of Kells and the Lindisfarne Gospels. Though the scale of these manuscripts is intimate, the ornamentation is so extreme, so meticulously crafted, that it took many hands many years to produce them. Wehle references this tradition of craftsmanship, but is deliberately and intentionally not trying to replicate it.

Rather, Wehle’s work attempts something more attainably modern: interference with her own imagery. As she layers paper, concealing and revealing photographic images through her cut-outs, her inquisitiveness is apparent. How much meddling can occur and have an image still be readable? Can a face be nearly obliterated by geometric patterns and still be seen as a face? How much information do we need, and how much can we get rid of? How does the intervening pattern affect different images differently? As Wehle says, “No matter how many paper layers intersect with the representational image of the photograph, the cut-outs ultimately act as negative space, forming lines and shapes out of nothing. They both enhance and obscure the representational image.” 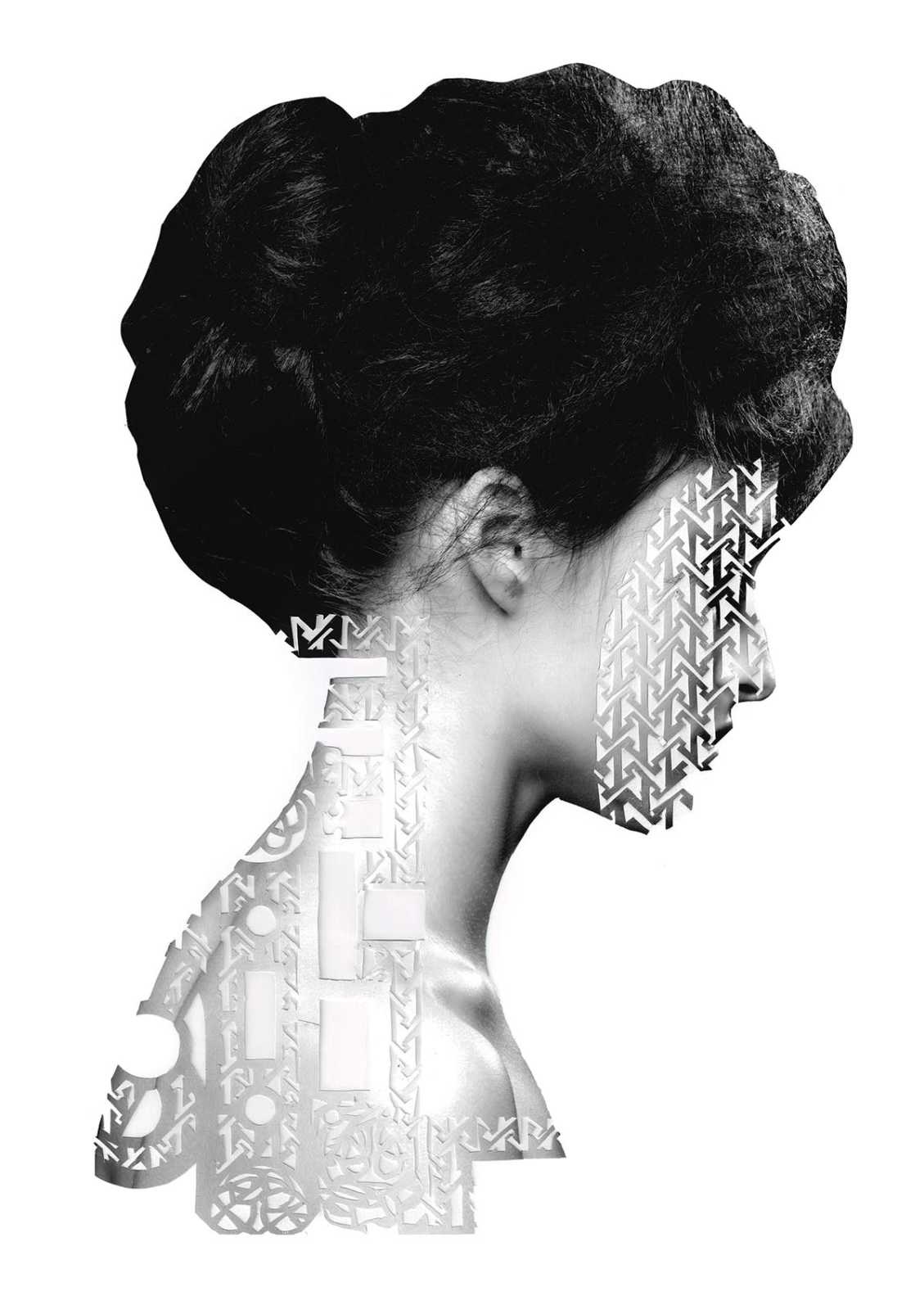 For her small collection of images at The Rymer Gallery, she has derived her compositions for the cut-outs from the Book of Kells. She describes the rewarding process of taking these motifs and reimagining them into something that feels more contemporary and pertinent to her own experiences. Thus the question: Do we make some art—specifically, in this case, patterns—in an attempt to apprehend The Infinite? Italian writer Umberto Eco posits, “What does culture want? To make infinity comprehensible,” and Wehle, with us along for the ride, forces the question of whether replication casts light on human experience or obscures it.

Wehle and her husband had a child last year. When asked how being the parent of a young child has affected her work, Wehle does not dwell only on the practical things. The new logistical demands that come into the world along with a child contrast strongly with the time-intensive, meticulous, and fragile art of hand-cut paper. One thinks of sturdy plastic objects, wipeable surfaces, and not a lot of extra time. But that is not the conversation. For Wehle, the birth of her daughter served to illuminate a new sense of her own mortality. There’s nothing like a first baby to remind us we are on a continuum—not a cul-de-sac, but a link in an infinite chain.

These are lofty ideas, but come from something basic. Humans want to see their flawed and limited selves in the light of something bigger, greater, more. Patterns—repetitious and tedious as they may be to create—are a stand-in for that bigger something. We might say there is a moral undertone when dense patterns are used. Humble negation of the self, not personal expression, is in service of a greater unity. Wehle’s studio is in the third bedroom of their home in Utah. Fortunately, her one-year-old daughter has not figured out doorknobs yet. 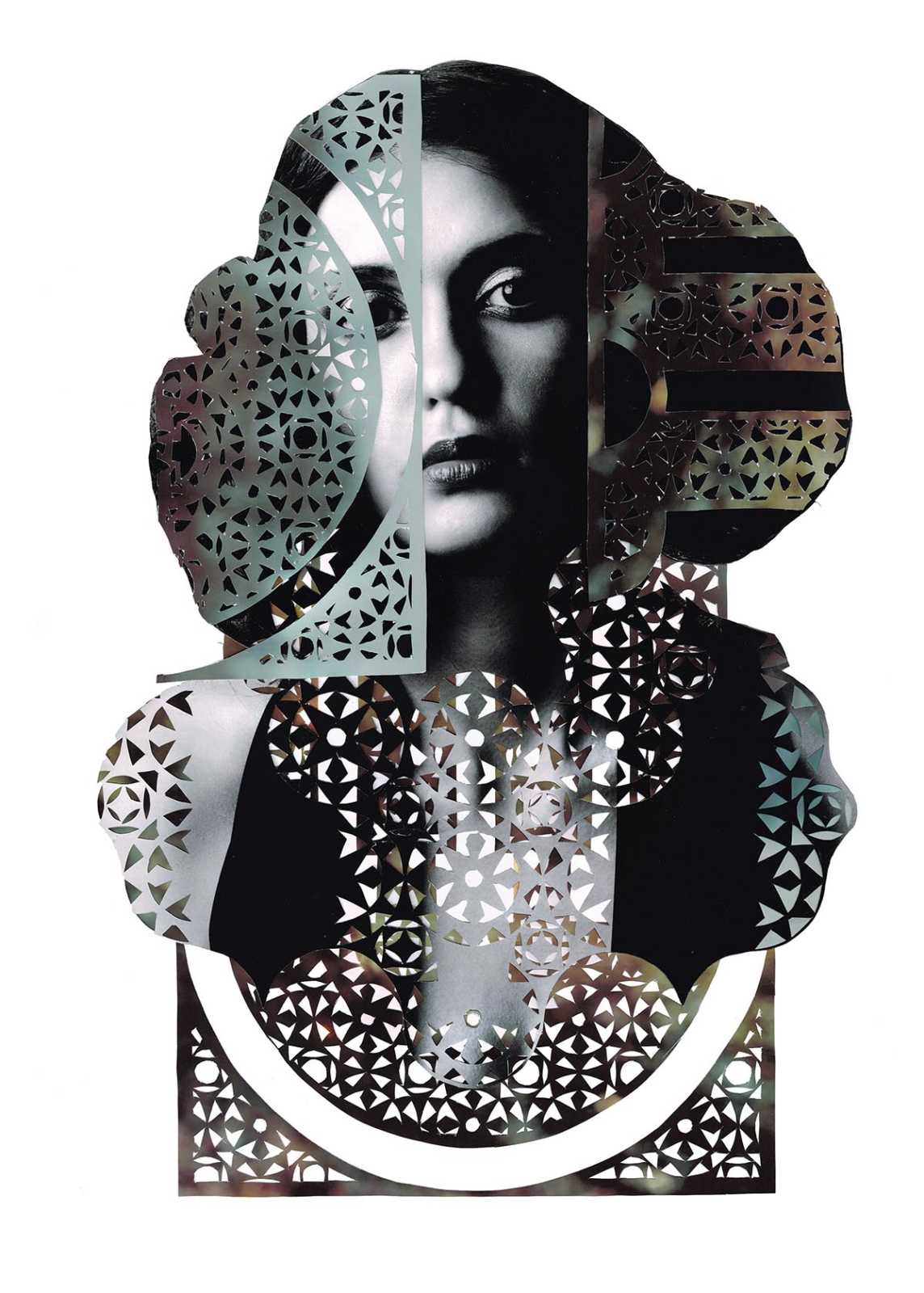 The contemplative dimension to the labor of pattern-making calls to mind the Shaker admonition “put your hands to work and your hearts to God.” Wehle’s intentions may not be so pious; the post-Modern use of images to comment on themselves speaks to a more existential tension summed up just as neatly by Simone de Beauvoir: “I am incapable of conceiving infinity, and yet I do not accept finity.”