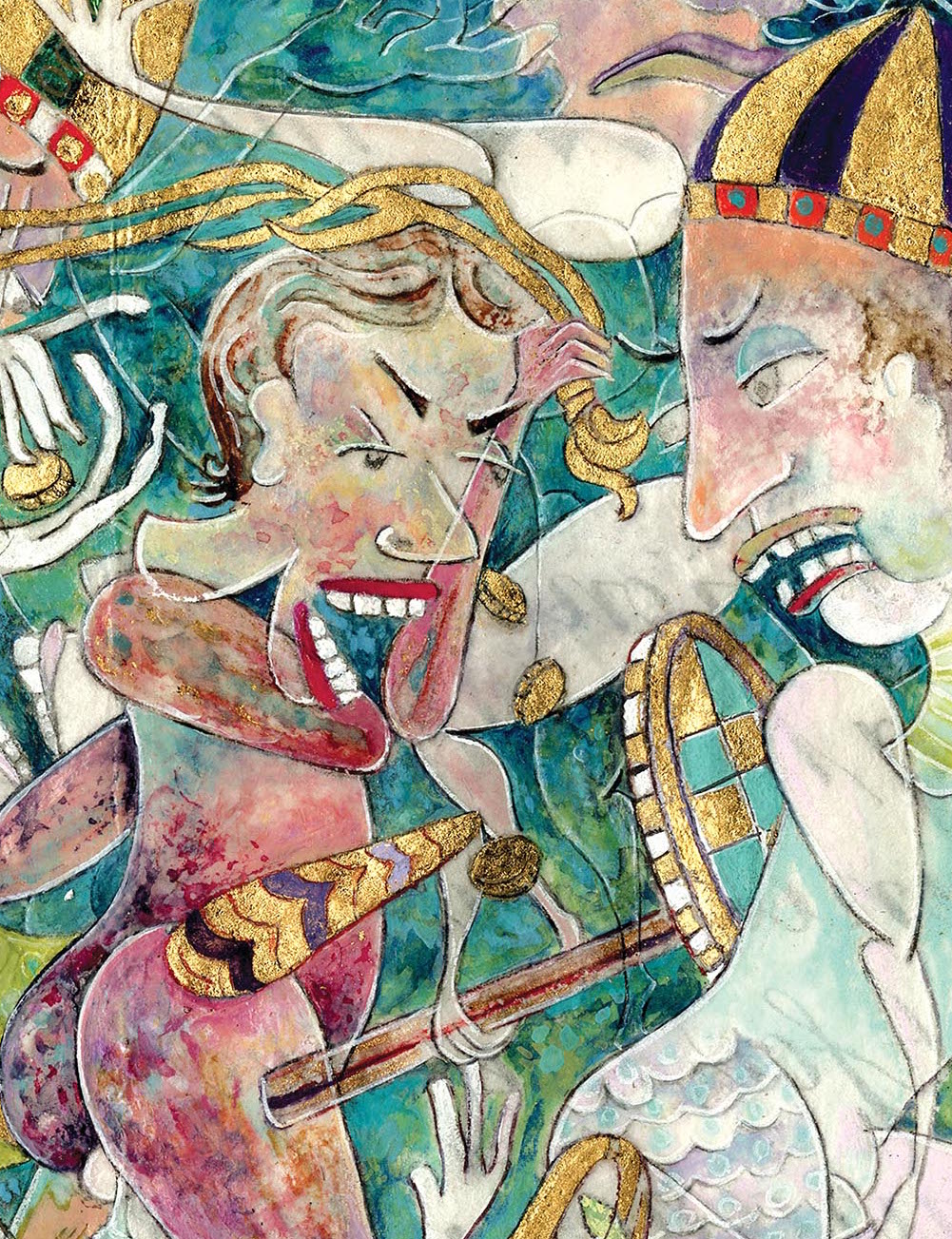 Miniature paintings throughout the history of art all have the same effect: the viewer must look closely and reflect upon the details to connect with it. From delicate drawings made to adorn bibles and other manuscripts by monks in medieval Europe, to small works on paper depicting secular scenes made by Persian artists at the same time, Amy Dean is fascinated with the style and impact these tiny works have. She began making miniatures in the style of illuminated manuscripts as a student at Austin Peay University. She now pursues this small-scale art as an intimate creative space where she can advance her own connections to the narratives she has encountered studying the history of art and literature.

Dean had seen illuminated manuscripts and painted miniatures in museums and books, but creating her own works required intensive research and practice. She credits her mentor Billy Renkl for giving her the tools to make art in this historical tradition: “He gave me my first piece of vellum and taught me how to use gold leaf. He mentioned to me that I could layer gouache by putting shellac in between the layers to help get a dense, rich, illuminated-manuscript-type quality that I wanted to emulate.” With guidance and a push, Dean developed her craft and sought concepts to inform her art making.

“I found my truth and light when I left the church and became sort of an existentialist, embracing art and literature as a path into self-discovery.” 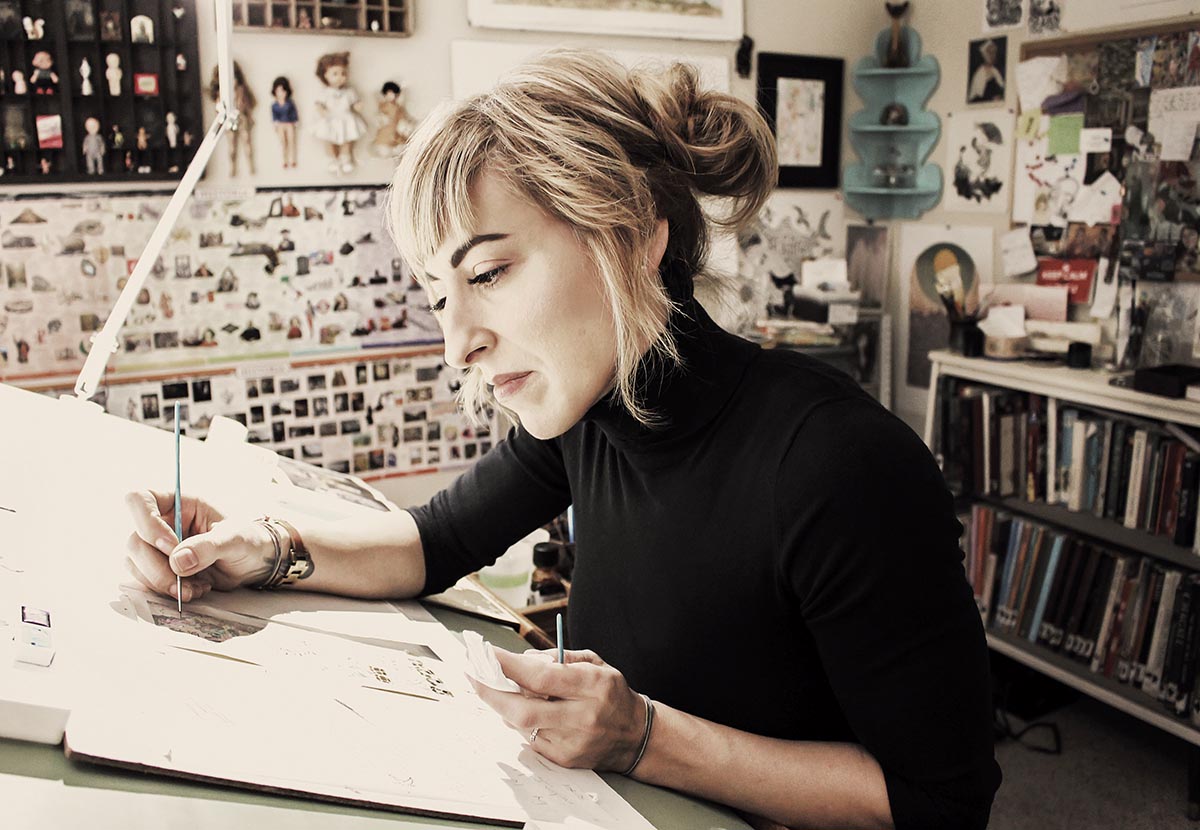 In her first work on vellum, The Mass of St. Gregory, she used German artist Albrecht Dürer’s 1511 etching as a reference source. Although she didn’t know the significance of the mass represented in the scene, the imagery grabbed her attention and inspired a composition. Like Dürer she positioned the Christ figure on the altar facing St. Gregory, and she included the attendants holding open boxes emitting plumes of incense. However, Dean transforms the static scene of ritualistic devotion into her own. Her artwork reveals an energetic, perhaps ecstatic, spiritual moment with a background of swirling hands and mouths and distorted faces. 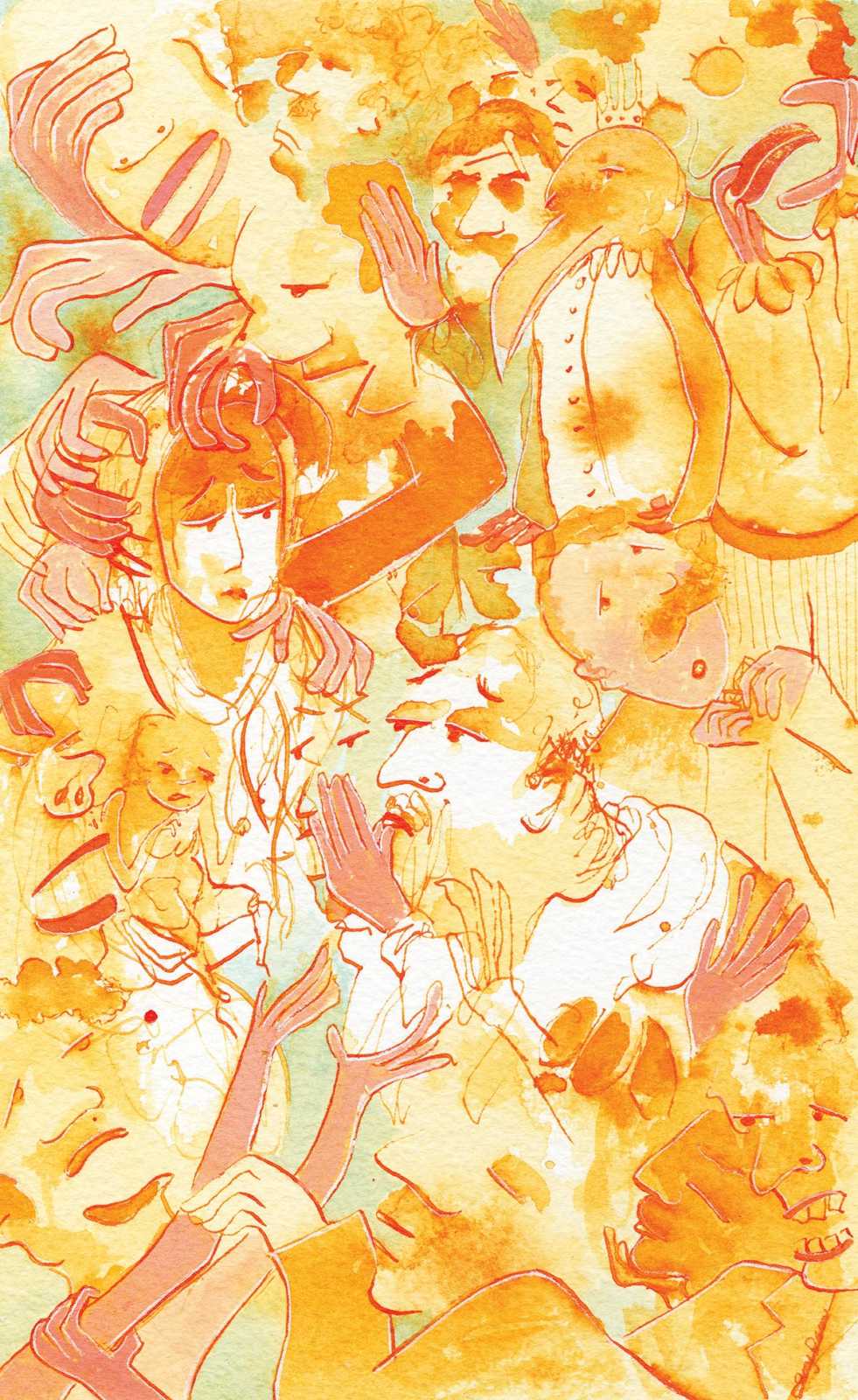 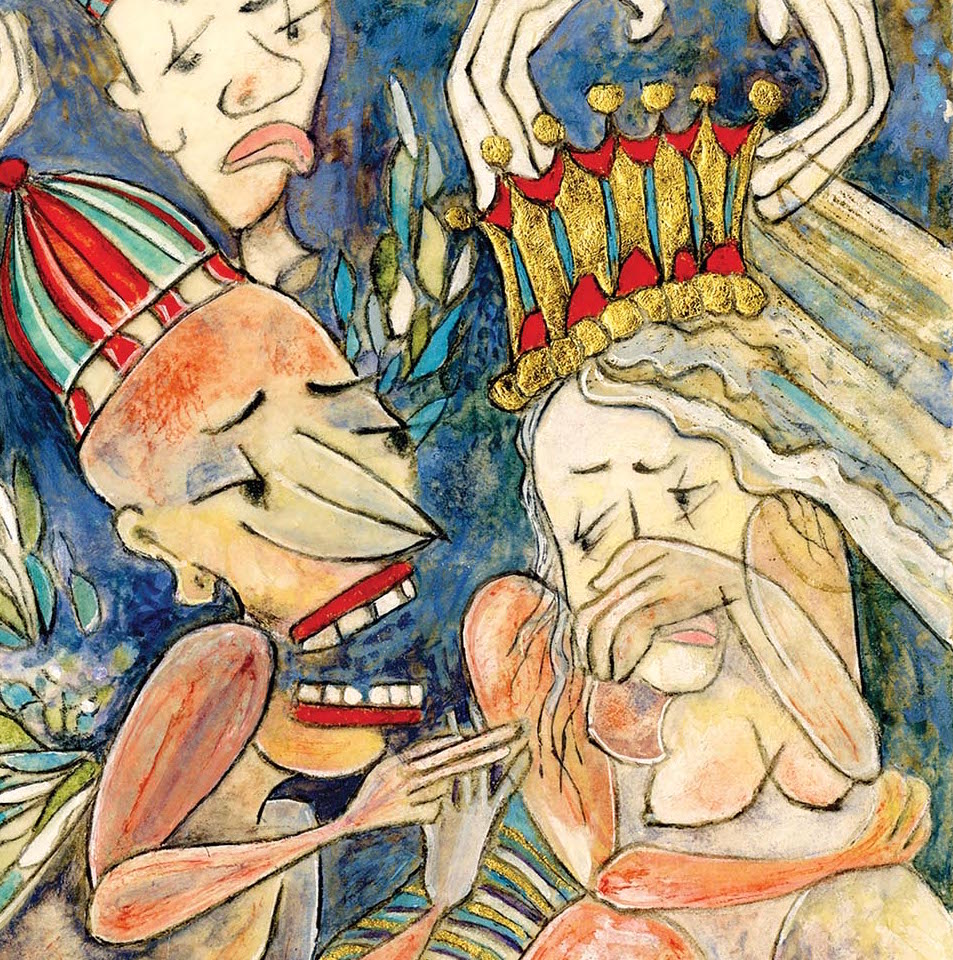 As she has developed her practice, she realized it wasn’t only the medieval aesthetic that appealed to her. She was attracted to her relationship with the narratives that were told through the centuries-old works of art. “I realized my compulsion to recreate these iconic religious stories is directly tied to my youth that involved a 13- year hiccup with weird, disorienting forms of Christianity that ended up (oddly enough) darkening my mind and restricting my capacity to live freely. I found my truth and light when I left the church and became sort of an existentialist, embracing art and literature as a path into self-discovery.” 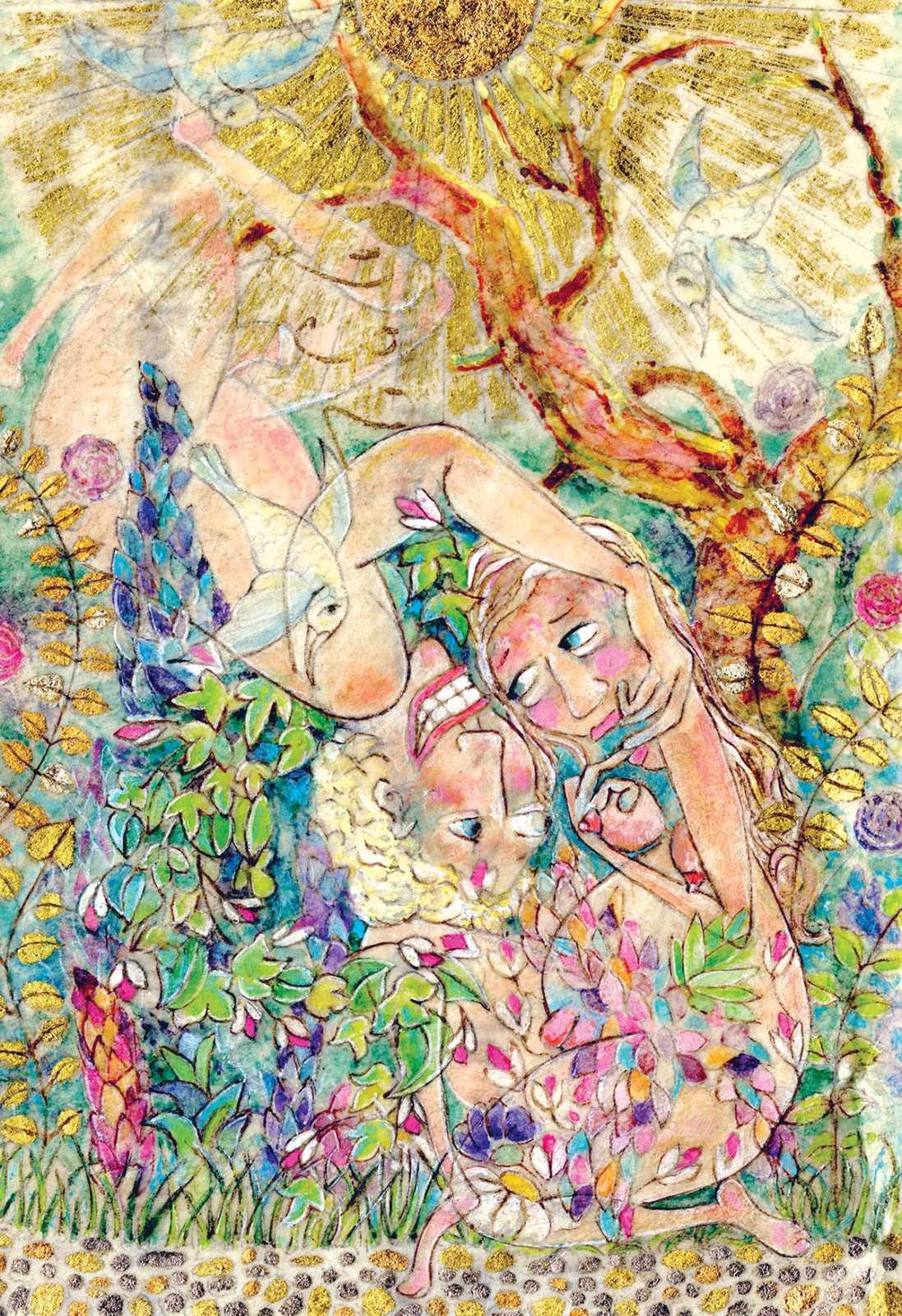 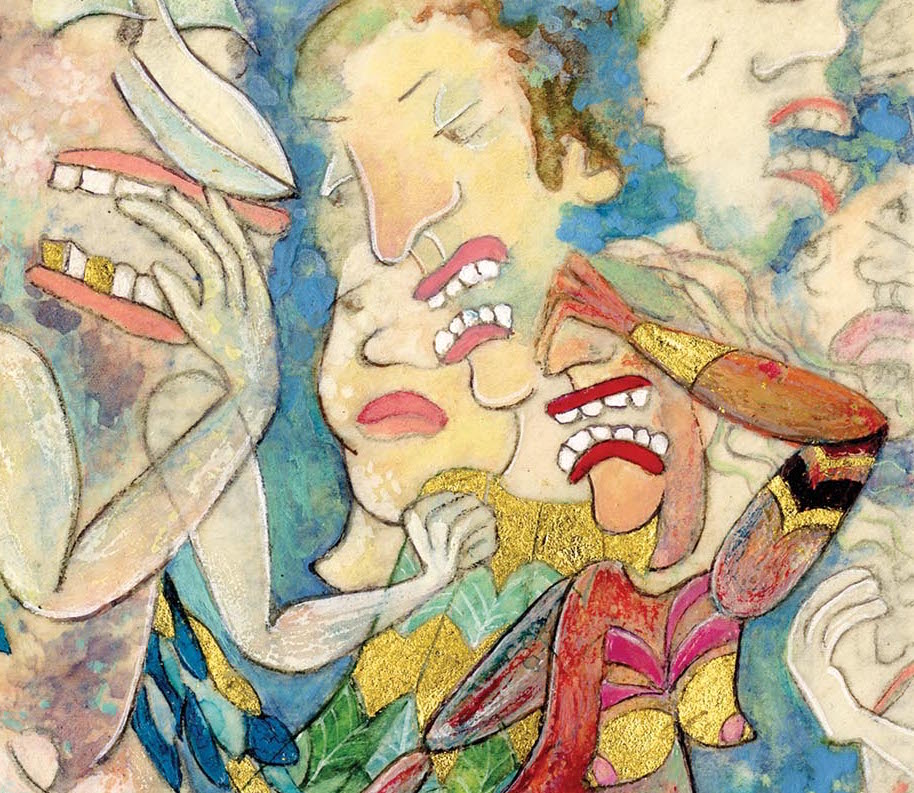 In The Last Judgement diptych Dean presents a frank view of the biblical end of days prophecy when God is said to separate the sinners from the saved. Loosely based on Stefan Lochner’s 1435 painting by the same name and inspirited with the hellish nature of Hieronymus Bosch’s c. 1500 The Garden of Earthly Delights, Dean’s interpretation is wildly playful and grotesque. As she says, “The original significance is still there, but I am drawing attention to the horror of the original scene in a cheeky, contemporary way.” One panel of the diptych features those receiving a “thumbs-up” from God. They are depicted smiling at each other and venerating the god above them. Those on the other panel are given the middle finger by the holy figure casting judgement down across them all. This twisting scene of spectacle is enlivened with sex acts, biting beasts, and aggressive gazes exchanged between the characters as they march on to hell. 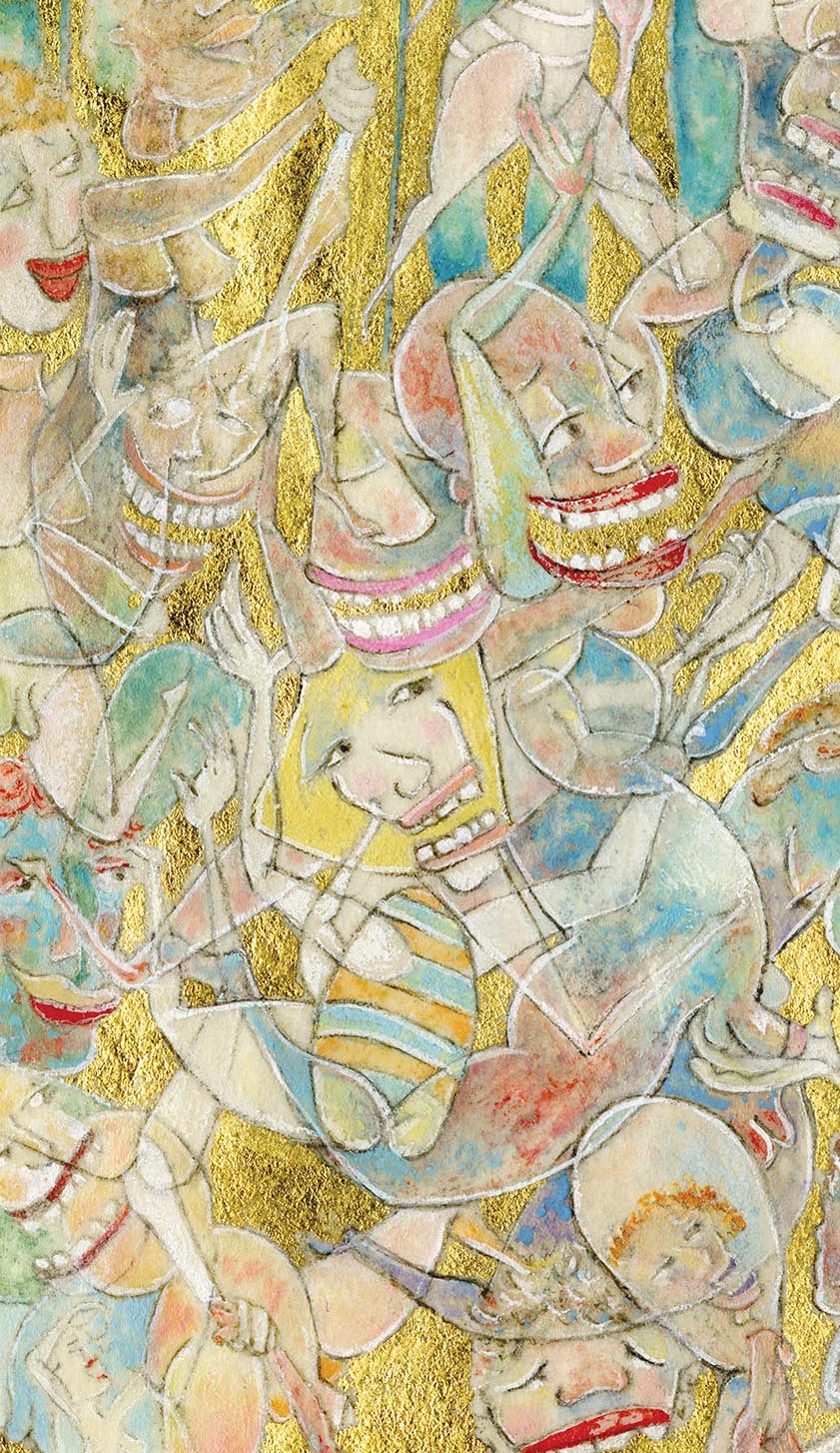 Religious texts and imagery inspire Dean, but she also draws from literature. As she sat drawing lines on a blank sheet, she became aware that lessons she’d learned reading Shakespeare’s Hamlet needed to be told through her art. She recalls her capricious yet thoughtful method: “Hey, that looks like it could be Rosencrantz and Guildenstern. I think I’ll do this one about Hamlet and make the main theme be around the tragic demise of Ophelia and how she was suffocated by the men who dominated her life at the time.” That Dean goes from drawing lines to forming a feminist cultural critique in a single fluid thought shows how contemplating art enriches her perspective of the world.

Dean’s art is not polite or apologetic. It is a true expression of her knowledge, feelings, and attitude. The interpretations she presents through her art provide space for contemporary viewers to reflect upon their own relationships with the stories and imagery that shape our culture.