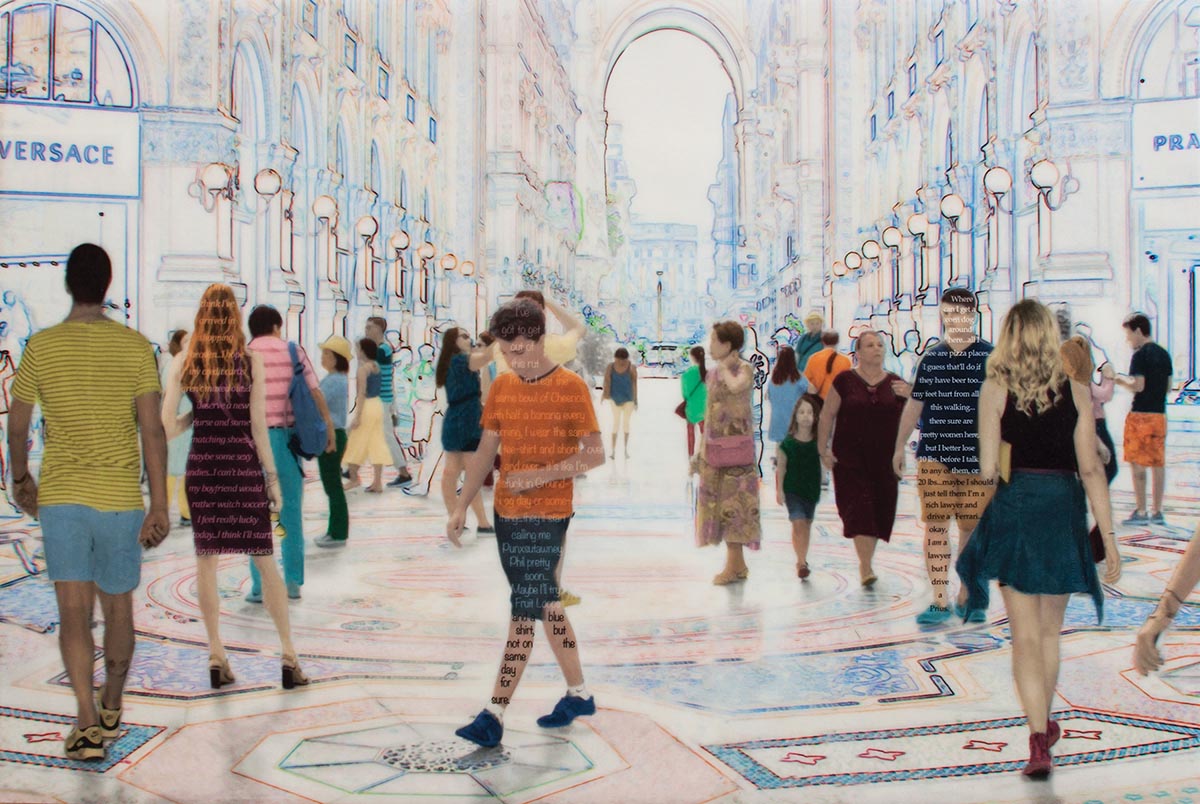 “The upshot of these narratives is that there is no guesswork for viewers. Those who aren’t sensitive to body language, for example, can read the subjects’ thoughts literally spelled out.”

Man has been trying to make visual sense of his world for almost 40,000 years. Through the earliest of drawings—tracings of hands in a remote Indonesian cave—man was most likely expressing his connection to a particular place, saying, as he does today, I was here. These early examples of figurative art expressed ancient artists’ desire to be part of a larger whole. As the centuries have peeled away to modern day, that desire hasn’t changed.

Artist Sherry Karver communicates man’s desire for belonging through mixed-media works on wood panels, using an extra layer to get her points across—words. She places narrative text across certain figures in each painting, creating stories filled with humor and vulnerability. Her narratives are inspired by the appearance, motion, and body language of each subject.

The upshot of these narratives is that there is no guesswork for viewers. Those who aren’t sensitive to body language, for example, can read the subjects’ thoughts literally spelled out.

“Having text in the work really makes the viewer stop and look at the work a lot longer,” Karver says. “Even people who don’t understand the meaning of a painting can read a little bit.” 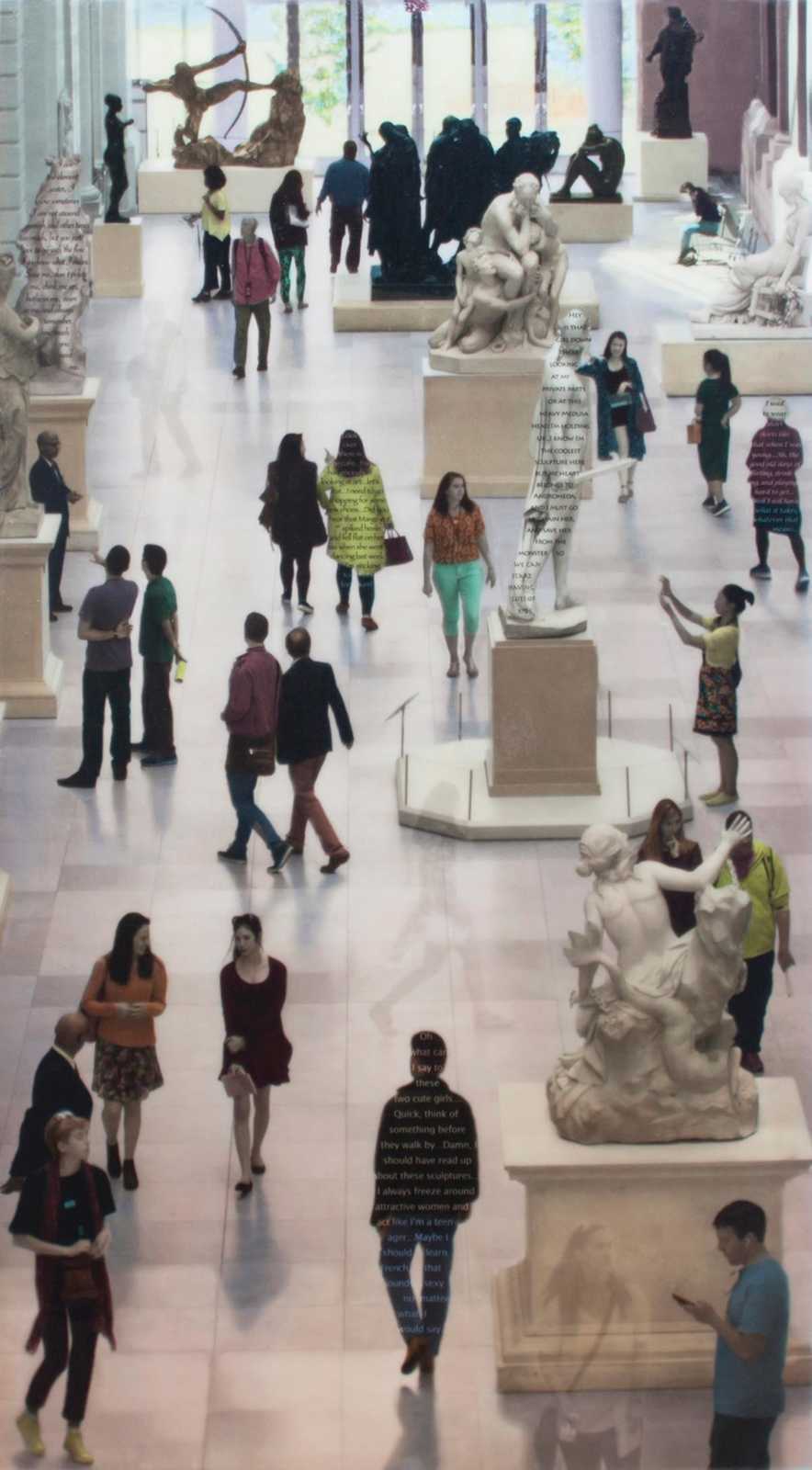 Karver’s upcoming exhibit at Cumberland Gallery is aptly named Thoughts Left Visible. It includes pieces with dreamy titles, such as The Sequential Nature of Time, Background of Our Future, and Until Then. The show will open with a gallery reception from 6 to 8 p.m. on Saturday, March 11.

To create this body of work, Karver took photos in metropolitan hubs throughout the world. An Adobe Photoshop devotee, Karver then manipulated the photos.

“I might take someone from Paris and put them in the Metropolitan Museum of Art,” Karver explains. “Sometimes I’ll put one person’s head on another’s body.”

Her craft involves printing the finished collages into large black-and-white pieces that she mounts onto wood panels and paints over with colorful oil glazes. The final step is staggeringly in depth: She pours up to two or three layers of high-gloss resin onto each piece, using a torch afterward to render the surface exceptionally glossy.

“It’s a very labor-intensive process from the beginning to the end,” Karver says. “It takes me about a month to make one piece.”

The shiny resin is meant to prompt viewers to contemplate their reflections in the paintings, thus becoming part of the story. And what stories are here. One excerpt is about a divorced mother of three who is trying to get back into the dating world, “doesn’t know the new rules, or even if there are any, and hopes she won’t have to pay for her own dinners. Tried speed dating but couldn’t make conversation fast enough.”

Another subject is covered in this narrative: “26 yr. old mascot for a football team, gets a little claustrophobic in his armadillo costume.” A museum sculpture says, “Hey is that girl down there looking at my private parts or at this heavy Medusa head I’m holding up.” A woman says, “Shy, slightly insecure massage therapist doesn’t like her job but the pay is good.” A man says, “Finally admitted to her that he wasn’t really a secret service agent.”

The narratives expose the list of emotions that comprise the human condition while bringing with them the creative quirkiness of a J. Peterman catalog. 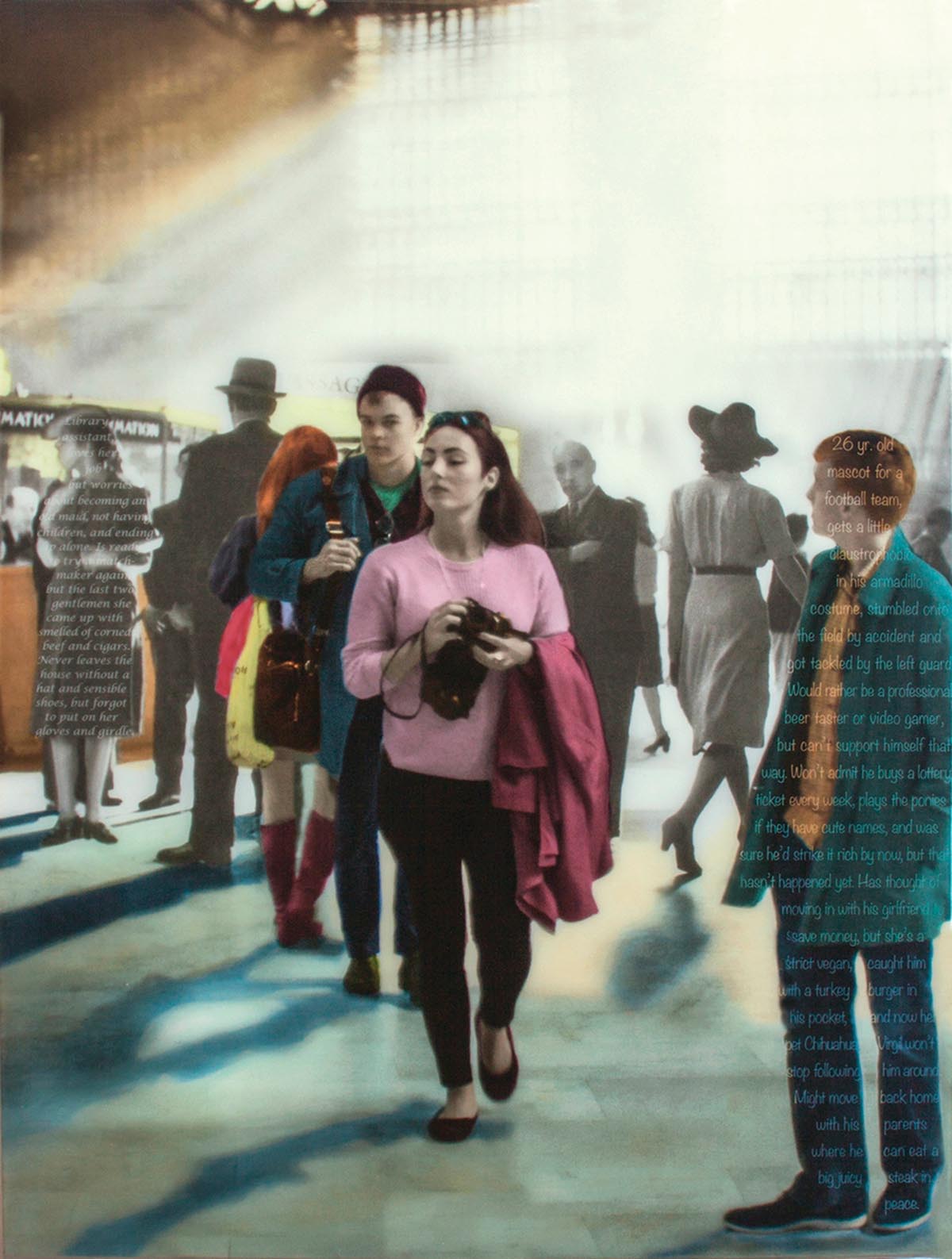 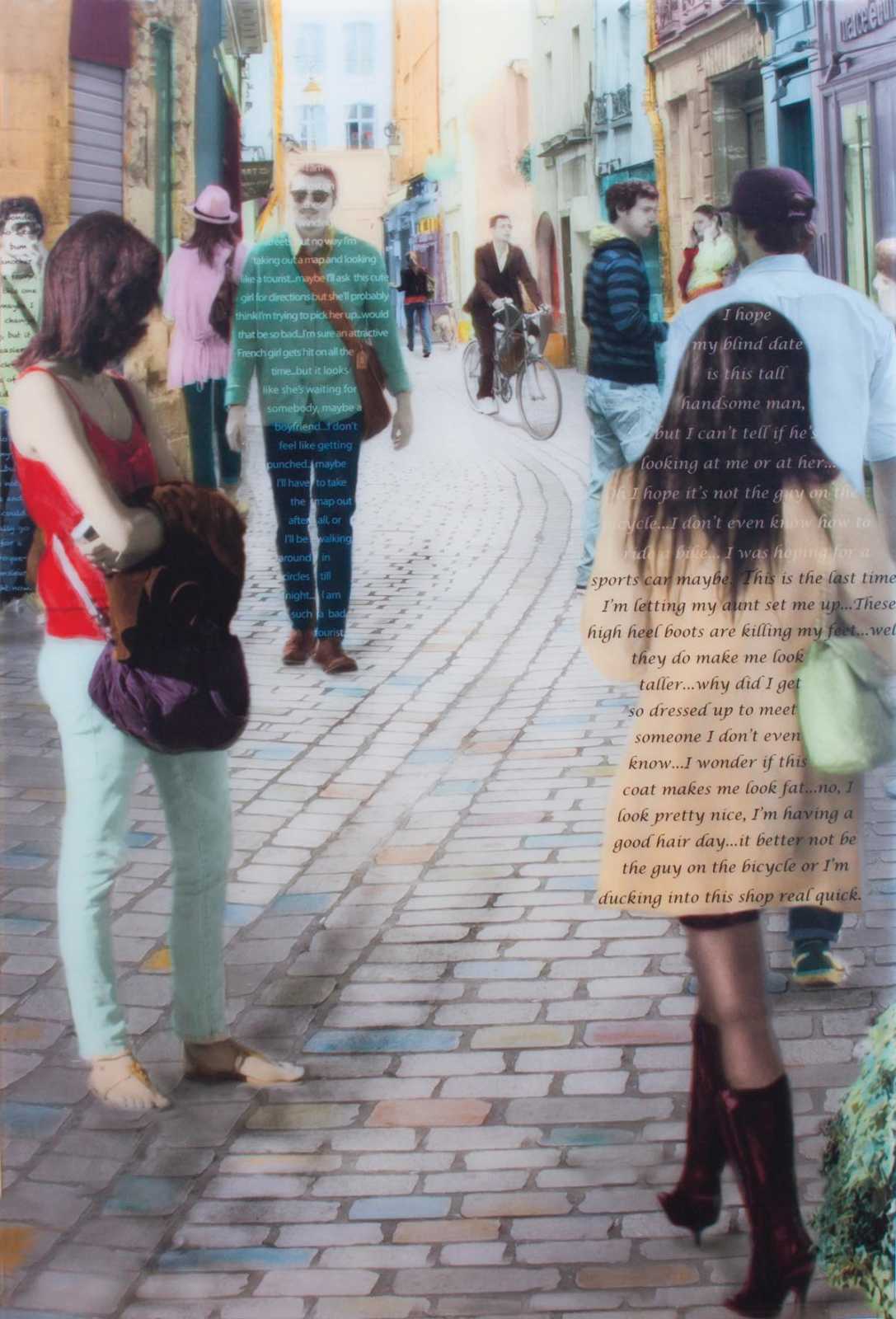 Karver came away from cities including Paris, Prague, Milan, and Venice admitting that her pursuit of subject material was “a little voyeuristic.” She also had an epiphany after watching Europeans in public: People are fundamentally the same everywhere.

“People are people, wherever we are,” Karver says. “People all over have the same thoughts and dreams and desires as the people in New Orleans or Nashville. We’re all the same.” 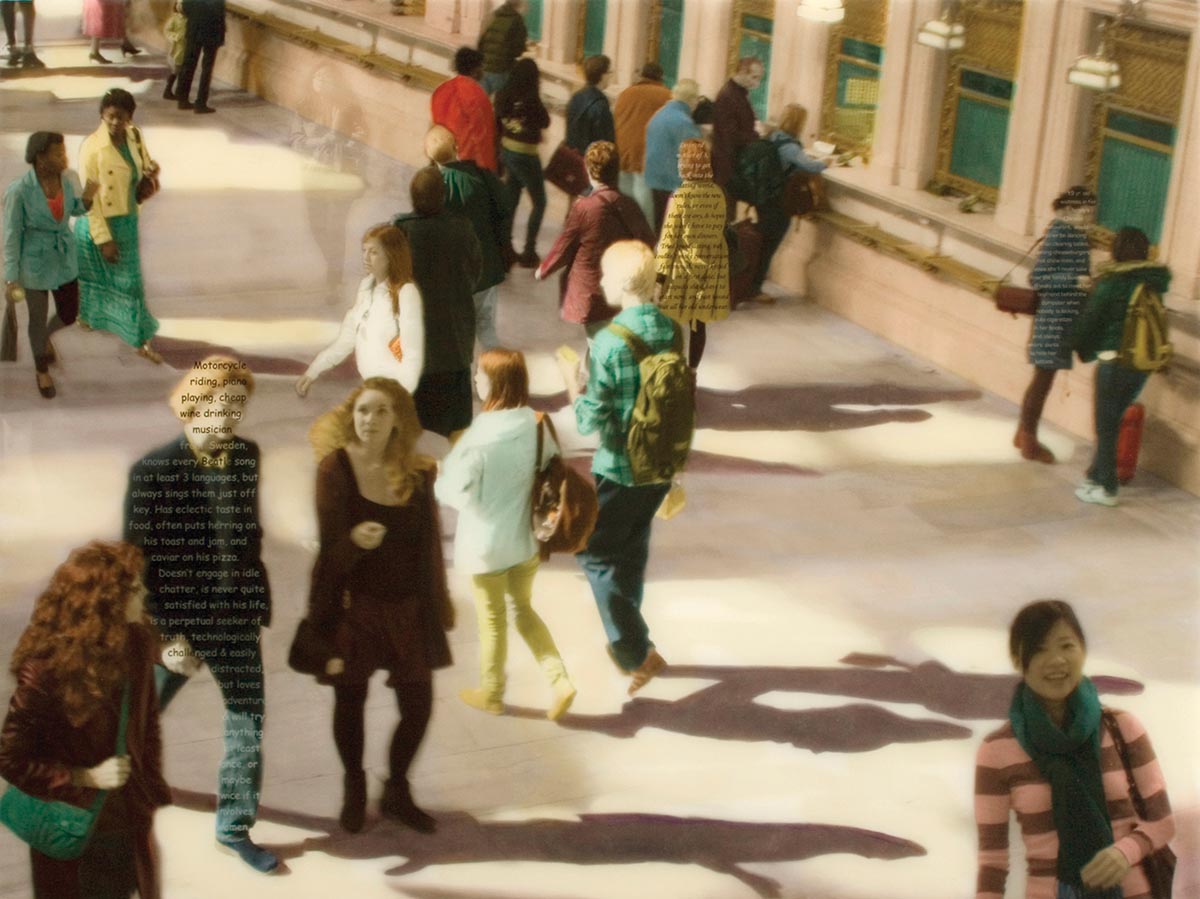 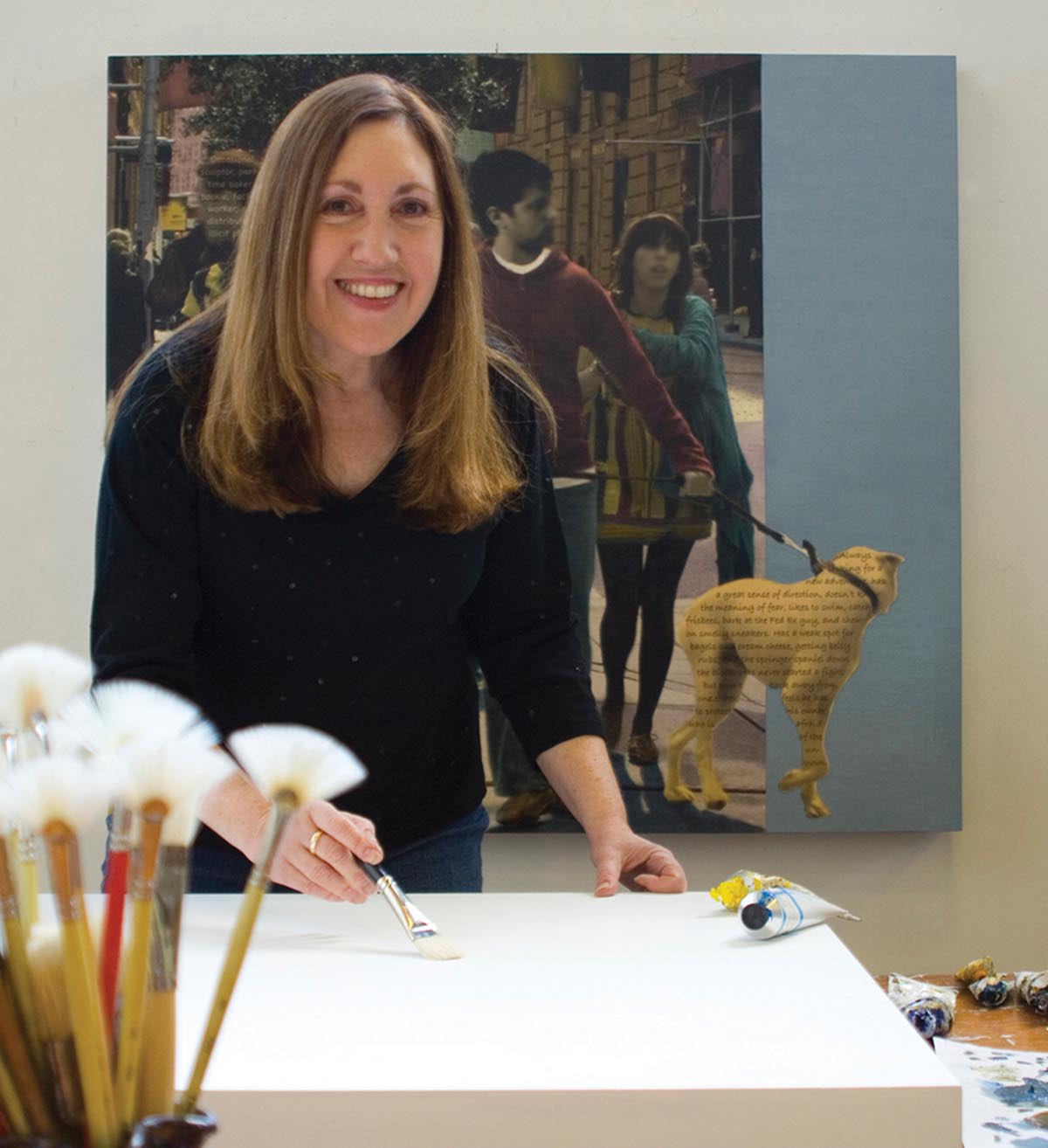 Sherry Karver in her studio

Thoughts Left Visible by Sherry Karver opens with a reception from 6 to 8 p.m. on Saturday, March 11, at Cumberland Gallery and remains on view until April 22. For more information, visit www.cumberlandgallery.com. See more of Karver’s work at www.sherrykarver.com.