“Momma instilled a natural love for music in Johnny. His roots were grown in faith, and his heart was grown in gospel music, which inspired him through his entire career. Our parents taught us about hard work, strong morals, and making the best with what you have, and that’s exactly what Johnny did.”

Studio Tenn continues the legacy of Johnny Cash at the Ryman Auditorium March 31 and April 1 with The Cash Legacy: A Tribute to the Man in Black. Artistic Director Matt Logan brings to the Mother Church of Country Music a new set and a new cast, creating a Cash legacy like you’ve never seen before. 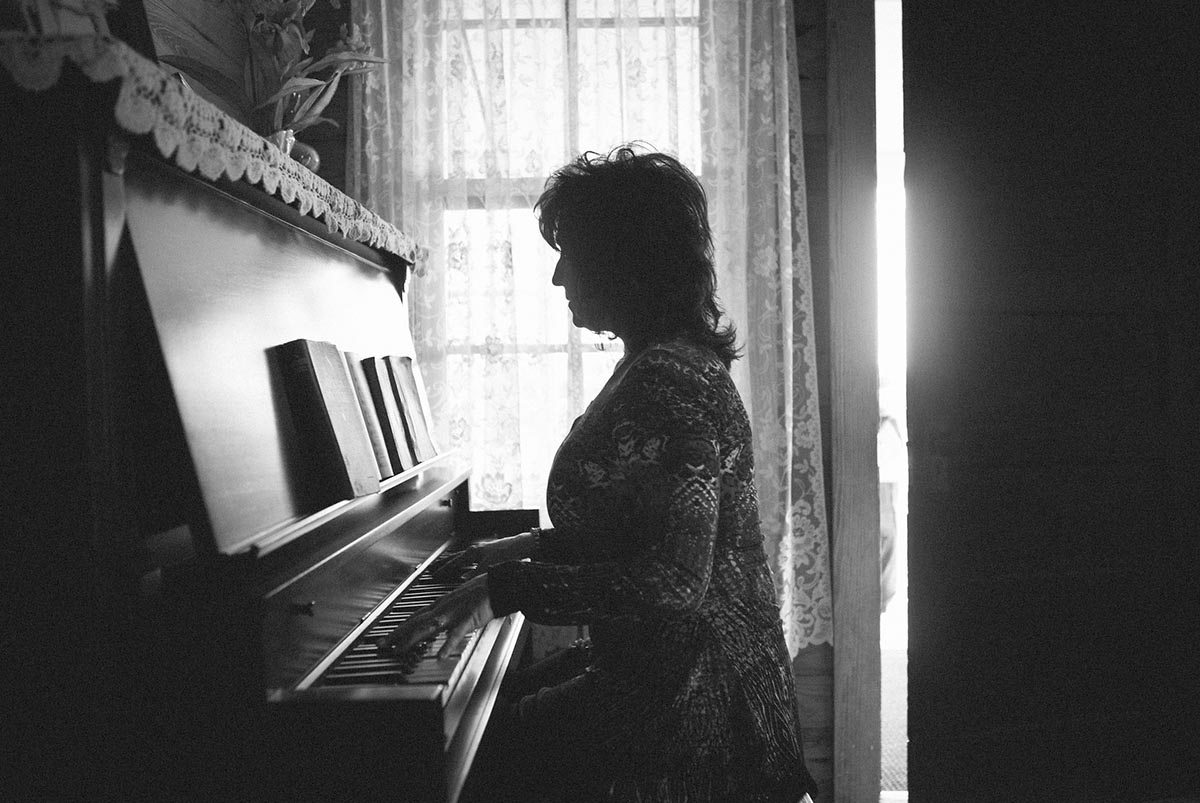 Rhonda Ponessa at her grandmother’s piano in Dyess, Arkansas; Photography by Anthony Matula for MA2LA

“History can be found at a museum or in a biography, but our Legacy series is much more than that,” Logan said. “This is an exploration through music, a tribute that allows us to bring the cultural arts of Middle Tennessee to the surface while showing that Cash’s music and songwriting continue to live through each of us today.”

Unlike any other show, Studio Tenn’s Legacy series brings accuracy to the personality, essence, and story of each artist. Rhonda Ponessa, niece of Johnny Cash, commented on the uniqueness of The Cash Legacy: “I was cautiously optimistic when first meeting with Studio Tenn,” Ponessa said. “As the hours went by, I could tell that they genuinely cared about telling the true story of a human being and not the story of a star. I’ve never seen any movie, musical, or show bring the story of Uncle Johnny to life in such an authentic way.”

An all-star cast takes the stage of the Ryman Auditorium to showcase the one-of-a-kind music of the Man in Black. Always Patsy Cline star Mandy Barnett, Grammy-Award winner Ashley Cleveland, and many others will feature the remarkable, and perhaps unexpected, relevance and versatility of Cash’s music. Musical Arranger Don Chaffer reimagines The Cash Legacy through updated arrangements of fan favorites such as “Ring of Fire,” “Walk the Line,” “Folsom Prison Blues,” “Sunday Morning Coming Down,” and many more.

Ponessa explained that to understand Cash you must first understand the five tenets that shaped his life: family, faith, redemption, his brother Jack Cash, and Dyess, Arkansas. The small town in which Cash was born and raised played a key role in his musical inspiration. From “Five Feet High and Rising” to “Daddy Sang Bass,” Cash often drew from real-life experiences of his upbringing in this quaint Southern town.

Cash’s humble beginnings never seemed to leave him. Even after his immense success, Cash sought refuge in the place he called “the center of my universe,” Bon Aqua, Tennessee. To this day audiences can enjoy concerts at the historic Little Stage (now the Storytellers Museum), where Cash’s Saturday Night in Hickman County guitar pulls once took place. The properties are now owned by Brian Oxley and are known as the Johnny Cash Hideaway Farm and the Storytellers Museum.

“I love that Studio Tenn really examined Johnny’s roots and never neglected his faith. The Cash Legacy at the Ryman brings it all back full circle, which means the world to our family. I am grateful for their willingness to make my family stand out once again. Johnny would have loved it! With love, always, Joanne Cash Yates.”

Join Studio Tenn and the Cash family to celebrate The Cash Legacy: A Tribute to the Man in Black on the stage of the Ryman Auditorium March 31 and April 1. For ticket information, please visit www.ryman.com.