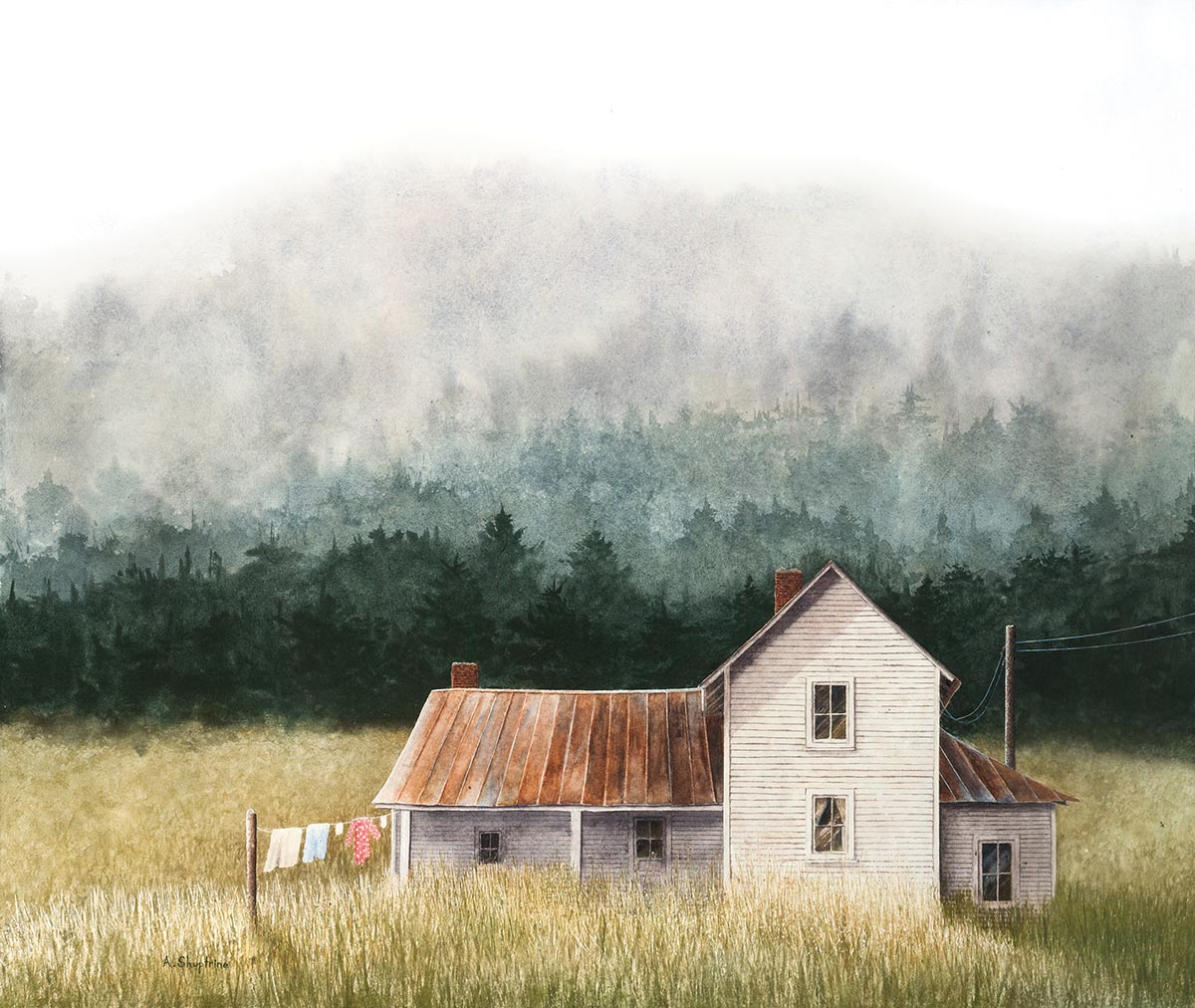 Appalachia is no mere mountain range. Beyond battlefields and farms, mines and hiking trails, the Appalachian region has a history as mysterious as it is unfathomably old. Nationally recognized watercolor painter Alan Shuptrine captures this region’s rich European heritage with Alan Shuptrine: Appalachian Watercolors of the Serpentine Chain, a traveling exhibition that debuts at the Tennessee State Museum in May.

From Tennessee’s misty valleys to the forests of Maine, the history of the Appalachian Mountains is, in a word, ironic. As Shuptrine explains, when British, Irish, Scottish, and Welsh immigrants first began exploring the Appalachian region in the 18th century, it reminded them of home—and indeed they were home, as these mountains formed more than 250 million years ago by splitting from what is now the British Isles. On both shores, twin veins of the mineral serpentine run through the land.

“The sixty watercolor paintings included in this exhibition are often peaceful, calming landscapes and frozen moments of utmost serenity.” 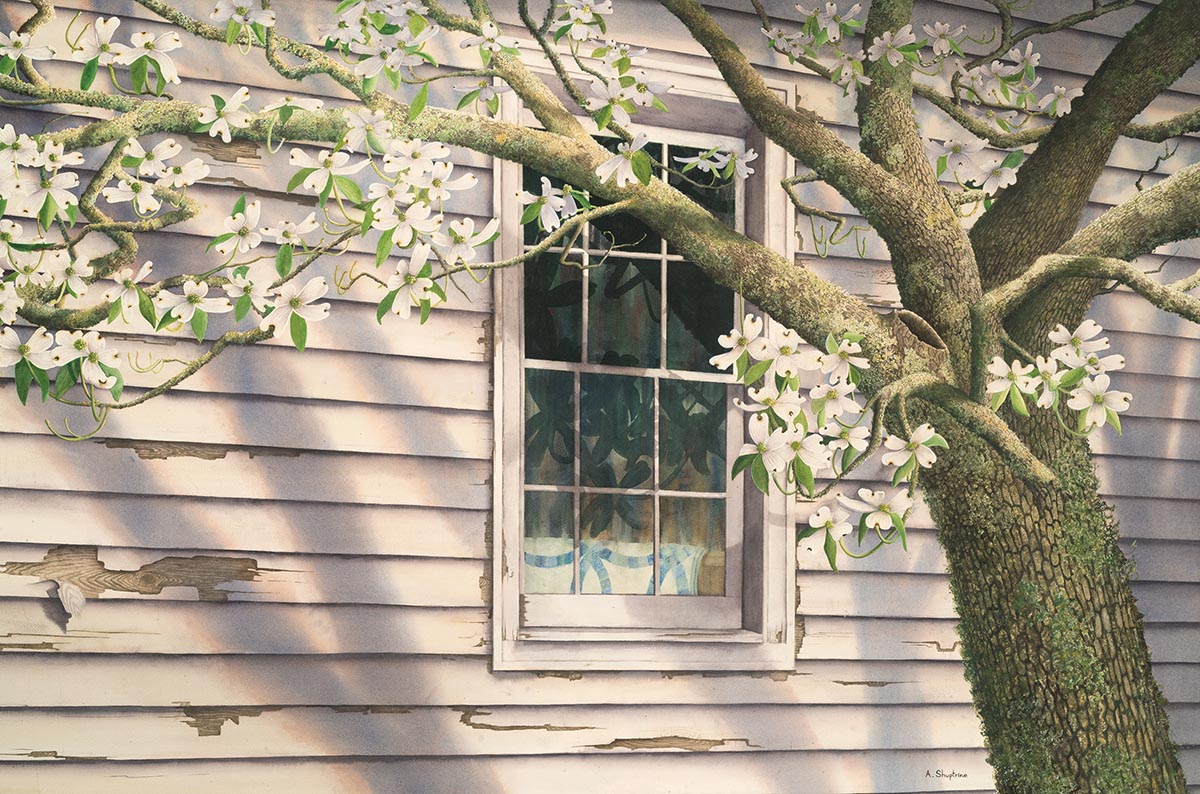 “They were coming back to the same mountains that they had left an ocean away,” says Shuptrine. “They were coming back to the same vein of serpentine. They were plowing the same rocky soil that they had left back in their homeland. People live in a certain place for a reason. A lot of it is what feels like home, what’s comforting to them.” (Shuptrine would know: He has always, except for a few homes, lived on top of a mountain, mostly in the South. He currently lives on Lookout Mountain with his wife, Bonny. He owns a fine arts gallery and specializes in restoring and crafting one-of-a-kind gold-leaf frames.)

The sixty watercolor paintings included in this exhibition are often peaceful, calming landscapes and frozen moments of utmost serenity. Along with the original paintings, the exhibition will include Shuptrine’s palette, brushes, and other supplies from his thirty-odd hikes from nearly four years. It will also feature loose watercolor studies done en plein air, offering a behind-the-scenes look that is especially fitting for a show about origins. 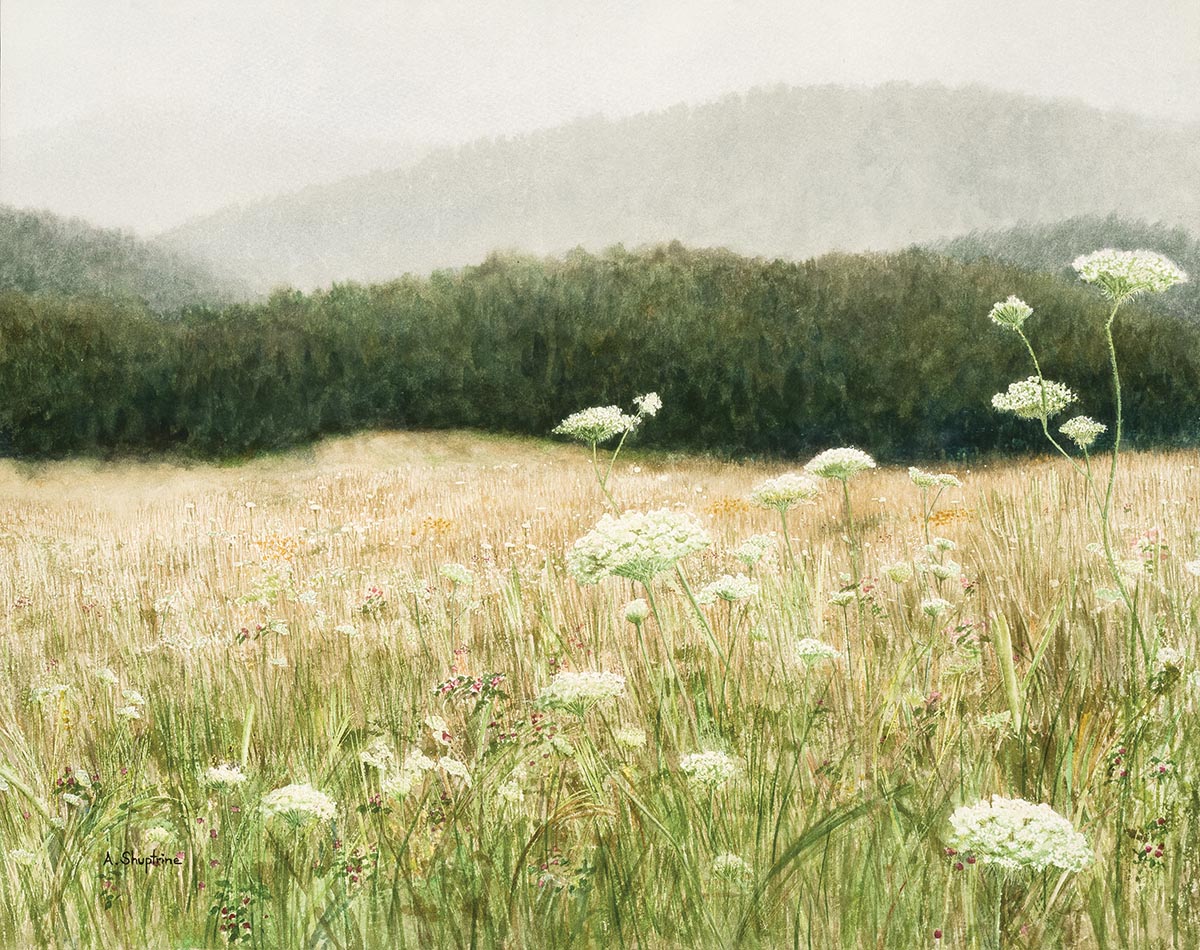 Citing realist painters Andrew Wyeth and his late father, Hubert Shuptrine, as his greatest influencers, Shuptrine imbues his work with a unique stillness, like each moment has held its breath. He explains that his father called his paintings “realizations,” and likewise, Shuptrine pursues emotional resonance over pure realism. His light often has a mythic quality, and shadows are subtle. But for all the beautiful scenery, at its core this exhibition is about heritage, with Appalachian ties to the old country that can be seen in folk tales, quilt patterns, and fiddle tunes.

Shuptrine’s devotion to capturing this heritage doesn’t stop with the traveling exhibition. A coffee-table book is underway, and he has plans for a documentary film.

For the coffee-table book, Shuptrine was inspired by his father’s collaboration with writer James Dickey, Jericho: The South Beheld (1974), which captured in words and illustrations the spirit of the declining South. For his own book, Shuptrine reached out to best-selling writer Sharyn McCrumb, a native of the Blue Ridge Mountains. “I think one of the reasons why she is perfect for writing this book is because she’s lived and breathed and bled Appalachia all her life, from a little tiny town on the border of Virginia and West Virginia, right on the Appalachian Trail,” he says. 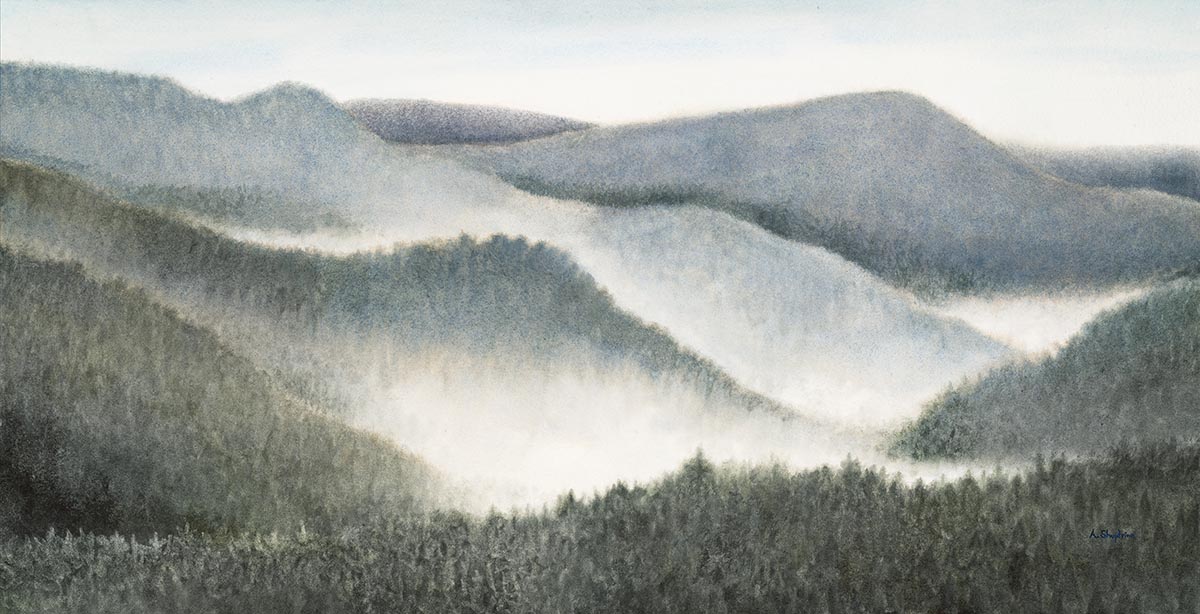 Shuptrine’s exhibition is the final show at the Tennessee State Museum’s current location at the James K. Polk Center, as well as the final show for Executive Director Emeritus Lois Riggins-Ezzell. “This is a huge honor,” Shuptrine says, “for my show to be her last.” 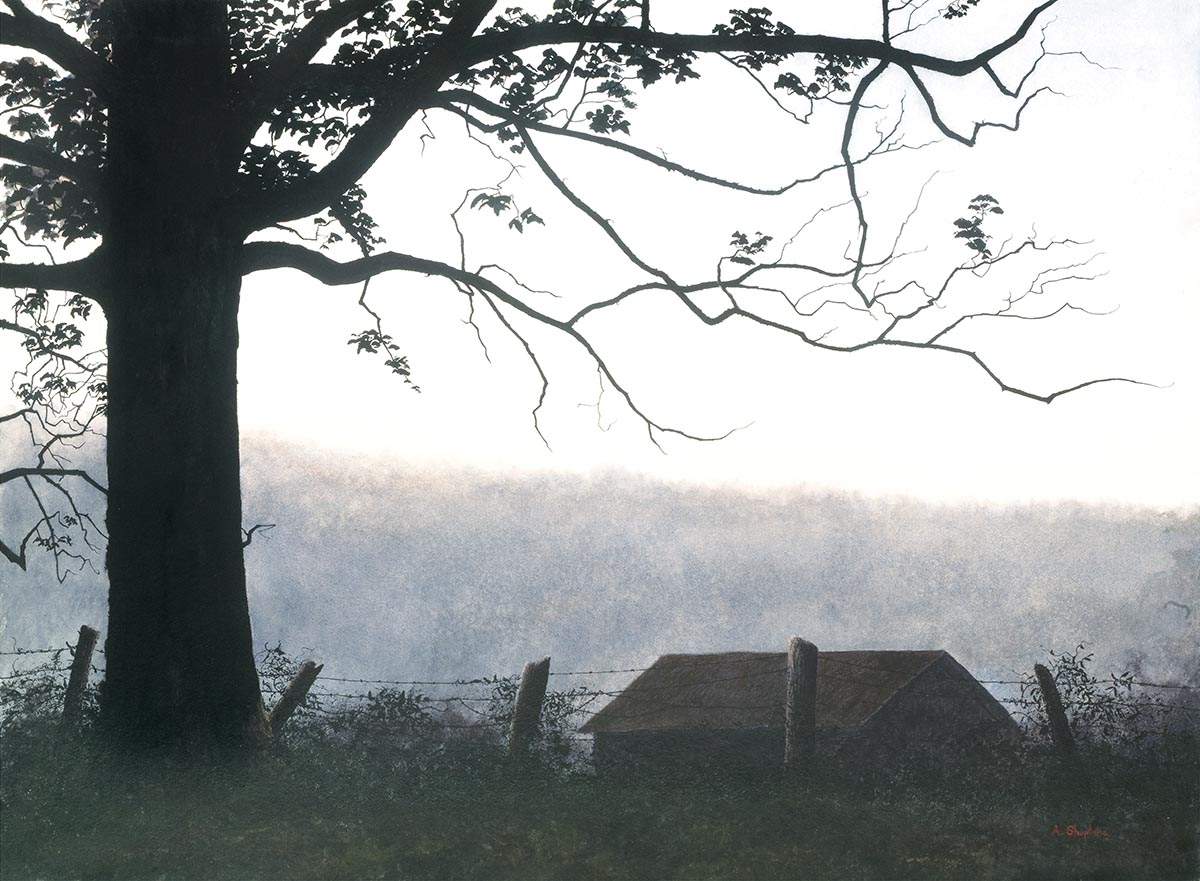 Someday, Shuptrine says, he hopes to do a sequel of the whole project from the British side. “[I hope] this can help serve as a monument to the Appalachian Mountains, people and the land, and shed light on the connection between Britain and America and strengthen that friendship.”

Alan Shuptrine: Appalachian Watercolors of the Serpentine Chain is on exhibit at the Tennessee State Museum May 19 through October 1. For more information, visit www.tnmuseum.org. See more of Shuptrine’s paintings at www.alanshuptrine.com. 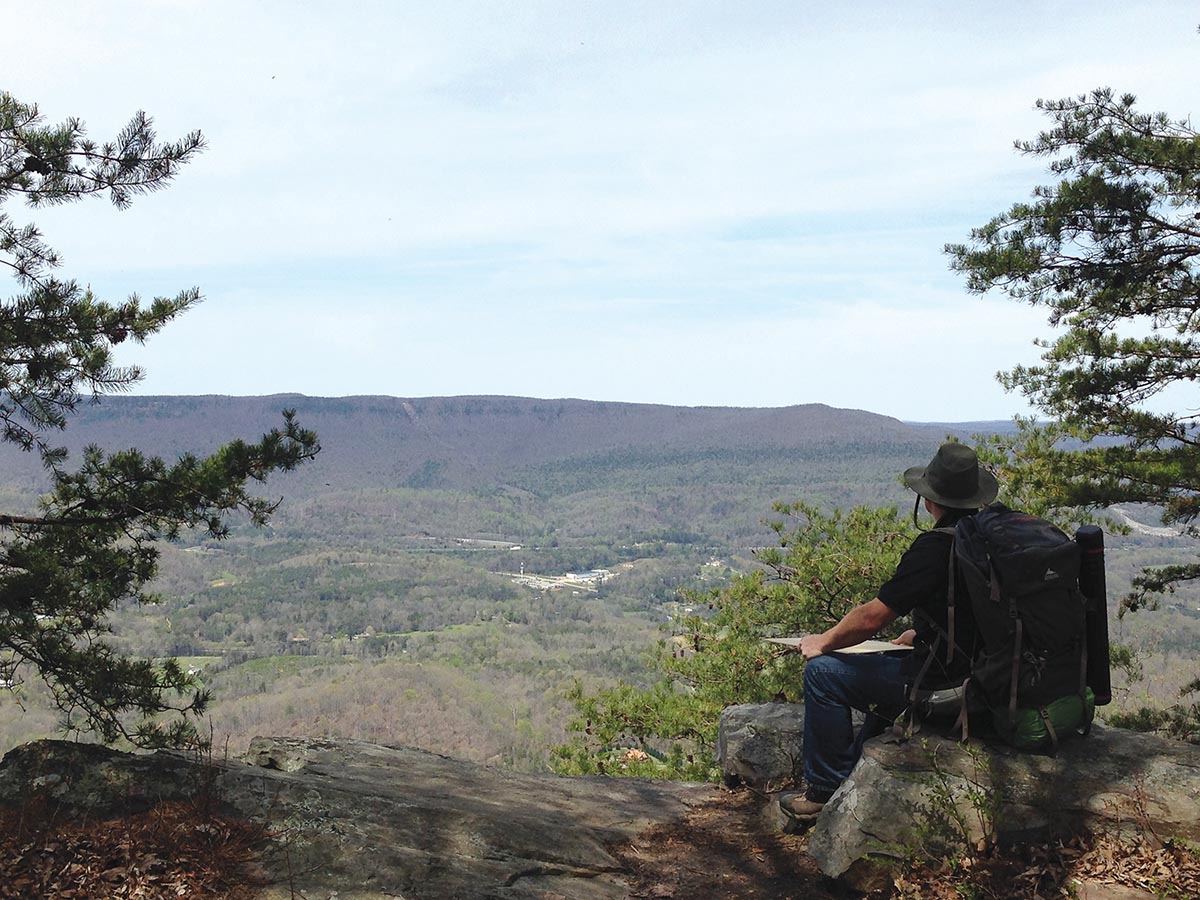 Alan Shuptrine sketching from a vista along the Appalachian Trail; Photograph by Jake Shuptrine