Jessi Zazu is a warrior. 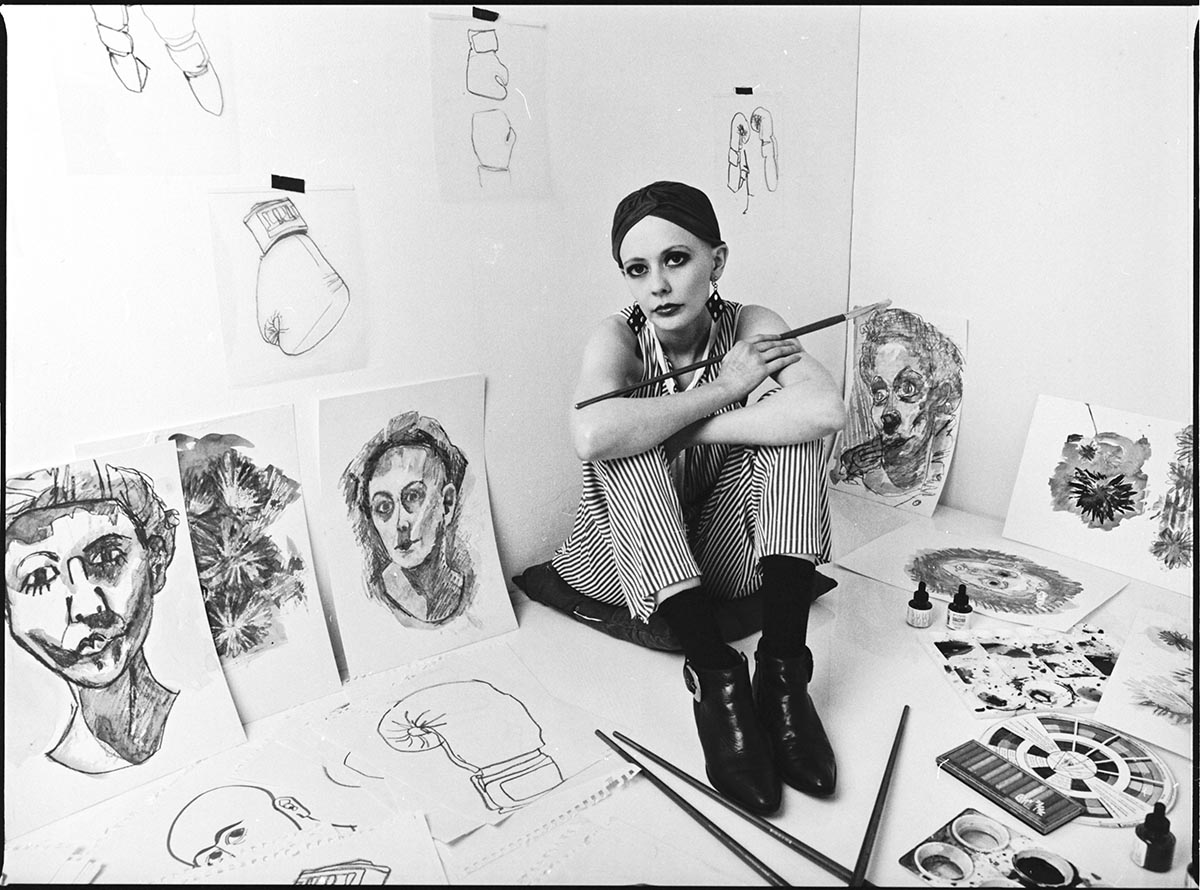 For the past year, she’s been battling cancer and making art about it. In her upcoming show Undefeated, Jessi takes paint to paper in an expression of love, strength, and fighting spirit. Recently I spoke with her about the ways that she experiences the healing powers of painting and how she has learned to shore up her defenses by diving into the moment. 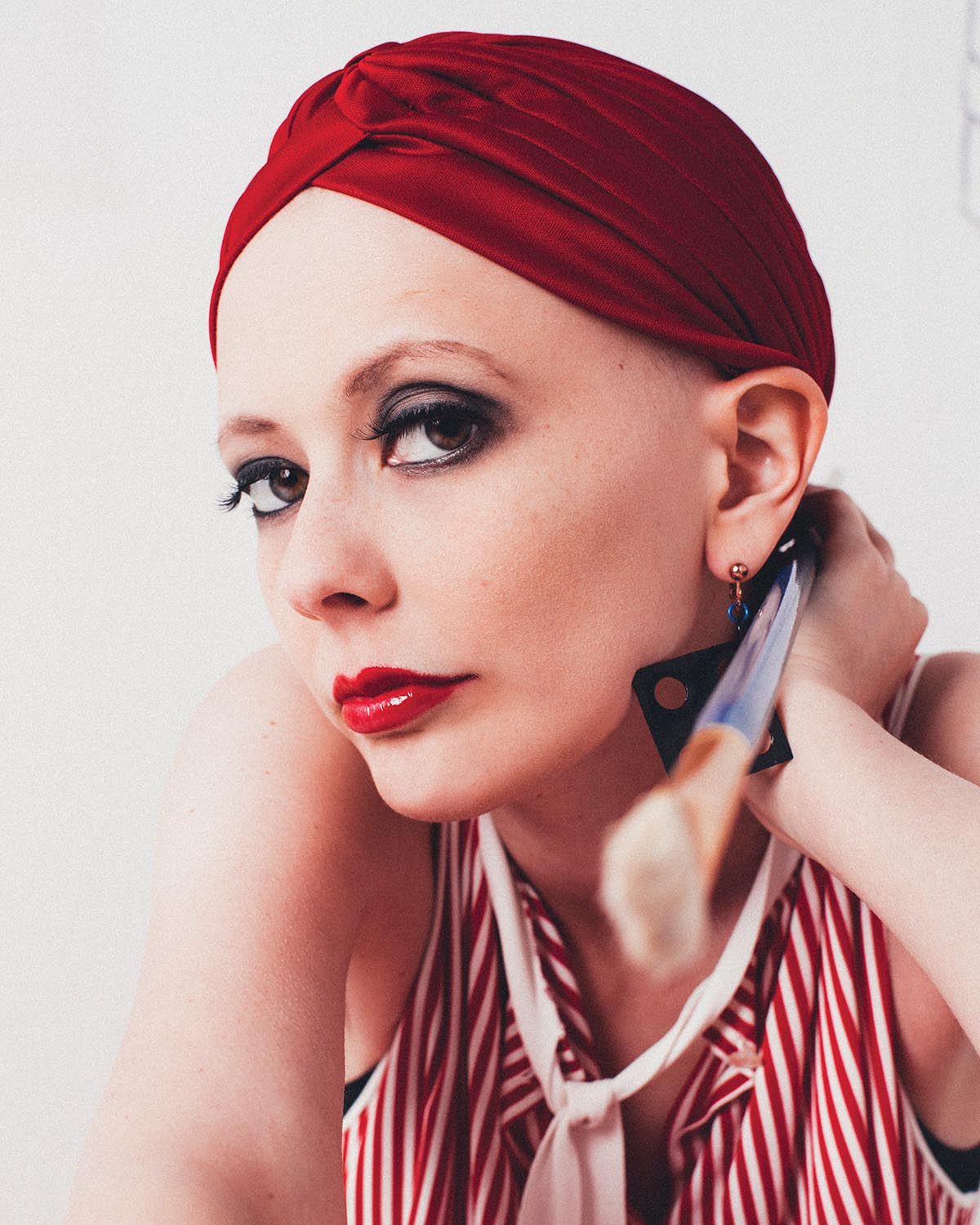 ML: You’ve said that in the last year you feel like you’ve really come into yourself. What do you think you’ve learned about yourself from being sick?

JZ: Oh gosh, so much. Mainly I’ve learned that I have a much greater capacity than I previously thought, and for more things than I would have previously imagined.

ML: When you say greater capacity you mean for the good things and for the challenges?

JZ: Yeah. It’s kind of interesting because it’s not that I didn’t know I could endure hardship because I certainly knew that I was tough enough to perform through rough circumstances. But I think what I learned was how to balance—that it wasn’t all about surviving the hard times. I really have learned how to nurture myself and my own spirit. Instead of letting the bad things beat me up, I’ve tried to focus on taking care of the good things. That’s helped me to stay strong in the hard times to a greater degree than I ever knew I could.

ML: Undefeated is about the intersection of healing and art. What is it about making art that feels healing to you?

JZ: There are lots of aspects that are healing. The actual act of doing art is a meditation. It’s almost as if, no matter what’s going on, if I can get into a drawing and acknowledge the presence of an object in front of me, I’m just taking the time to see it and that’s it. It’s a moment of awareness that when I’m not drawing I’m trying to find all the time. All these millions of worries that I could have now and that I had before I was sick … I had periods in my life where I would worry constantly over things that might happen, and I suddenly realized how much energy was going into that. And what I like about art is that it takes you out of all that swarm of anxiety and puts you right in a moment in time. And then when you look back at a piece you always remember that moment in time. I have lots of drawings where I can look back in my sketchbook in five years and remember exactly what conversation was happening while I was making that drawing, even if maybe the details of the conversation have faded. I remember the feeling and who was there, and it helps to preserve little moments of life that seem insignificant at the time. When you look back, sometimes you realize that all those little moments make up who you are. 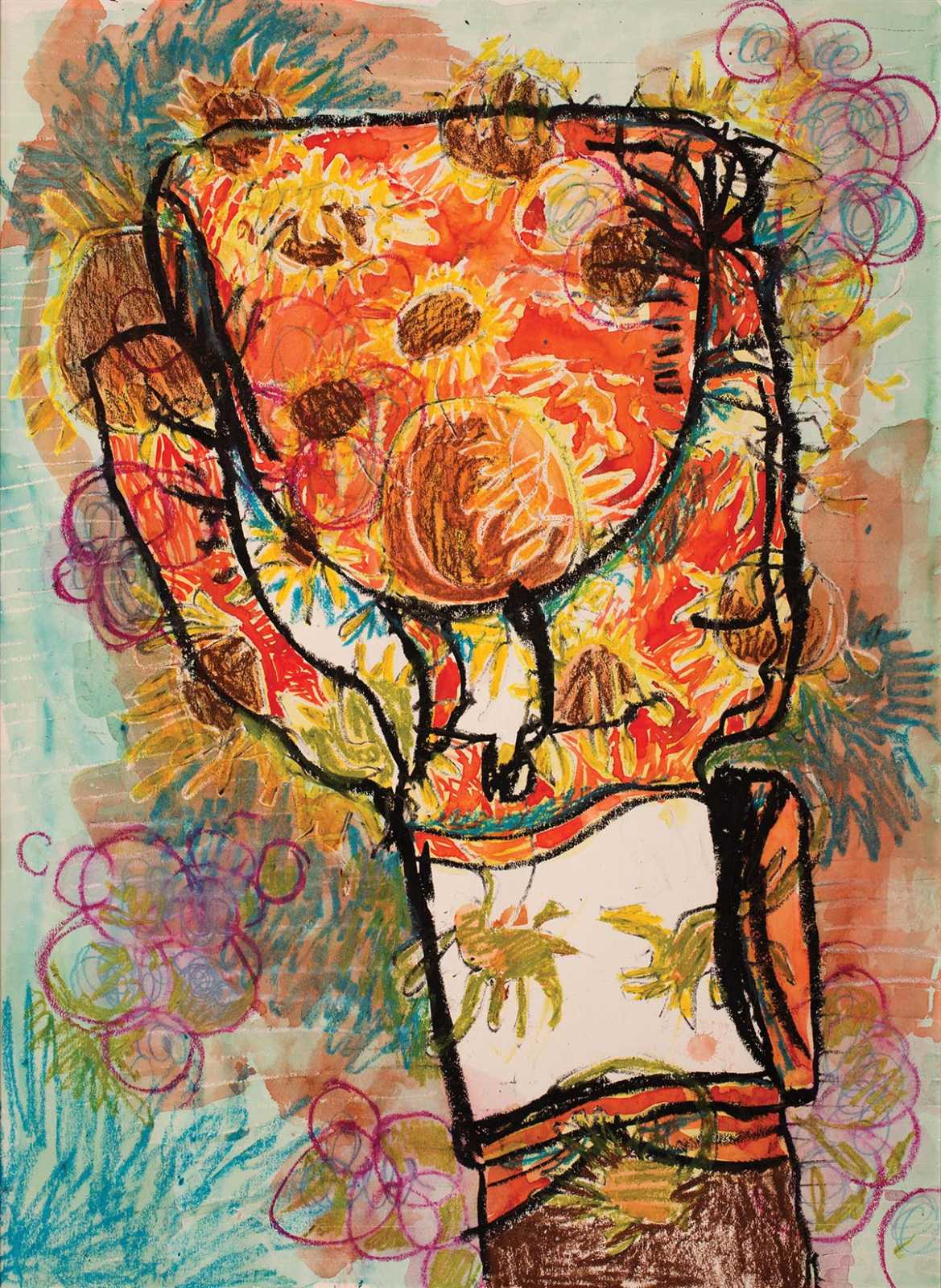 My greatest challenge is being in the moment because I am a person who likes to be deep in thought. I’ve always been really sensitive to my emotions, and I’m always contemplating and analyzing. So I like art because it can help me filter that stuff out in a really concise way and put it down and move on. Especially going through something as challenging as a critical illness. Now I do a lot more than just art as a way to process, but even before I had all these extra tools I always had art as a way to get me through, so I was doing some of the process work before I even understood I was doing it. That’s how art helps me for my own healing, but then there’s this whole other aspect of it which is like you make art and then other people recognize their own selves in that art and it’s healing for other people. And that can be healing

“My greatest challenge is being in the moment because I am a person who likes to be deep in thought.”

for me too, because I spend so much time and sometimes anguish in whatever it is that’s coming out from me into my own art and music, and then for someone to find any sort of comfort from that it makes me feel like I’m so glad that I took the time to do that.

ML: It sounds like creativity and art help you to heal yourself and also that there is some community aspect to it. Do you understand there to be a greater purpose to your work?

JZ: From the very beginning, I made it a point to take my artwork and supplies with me to the hospital and take a lot of reference pictures because I knew I wanted to make a show out of my experience and because I felt like that was the only way to survive. My mom and I were both focused on making art as a way to weather the storm. There were so many challenges being thrown at me all at once, I wanted to catch all these little moments that add up to this really really big experience. I think it helped me to say, “Okay, if I just focus on this moment, if I just draw everything in this room, then I won’t lose myself.” 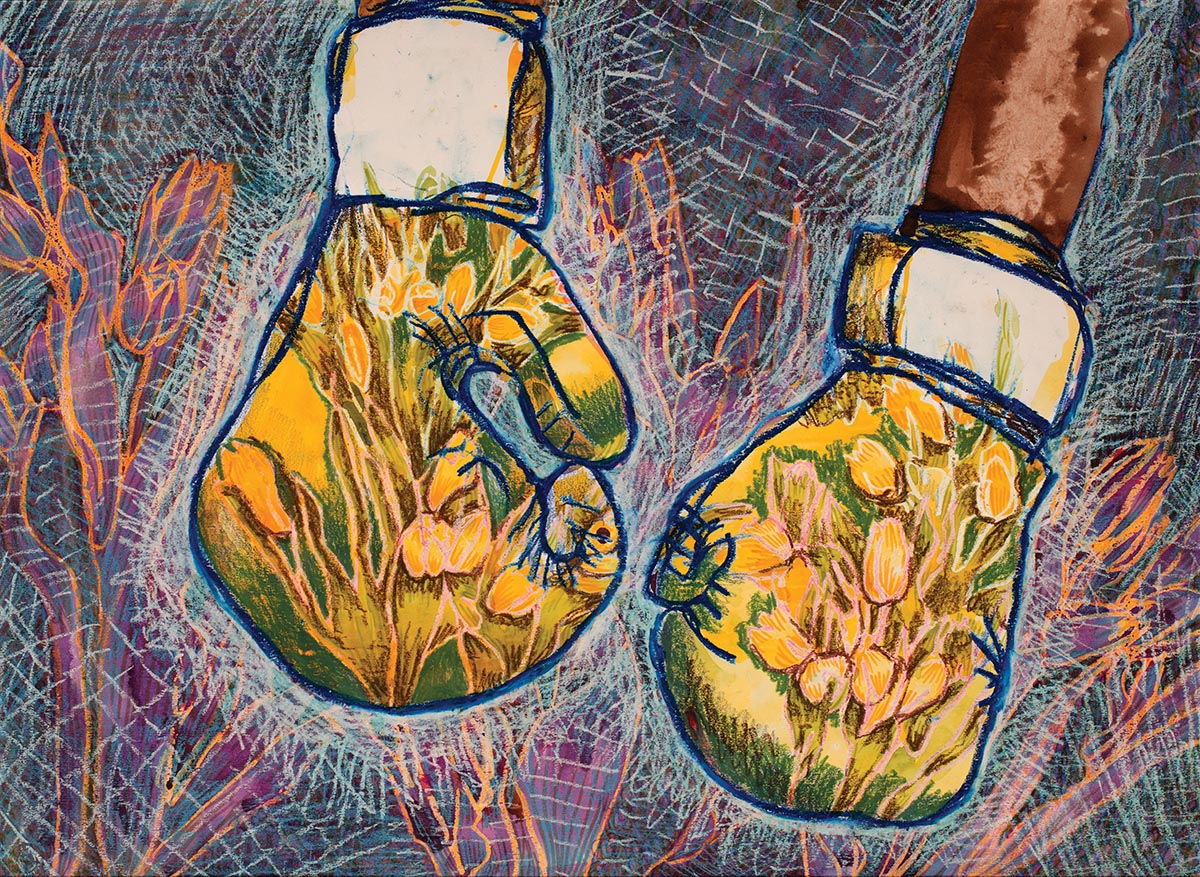 ML: It’s so interesting to hear you say that you wanted to go toward that moment, because you might expect the typical response to be to try to get out of that moment.

JZ: I guess I’ve been through phases of escapism, and I’m just not a fan of who I’ve become in those phases. I think I have learned to face things head on—I’m going to be there for it anyway! 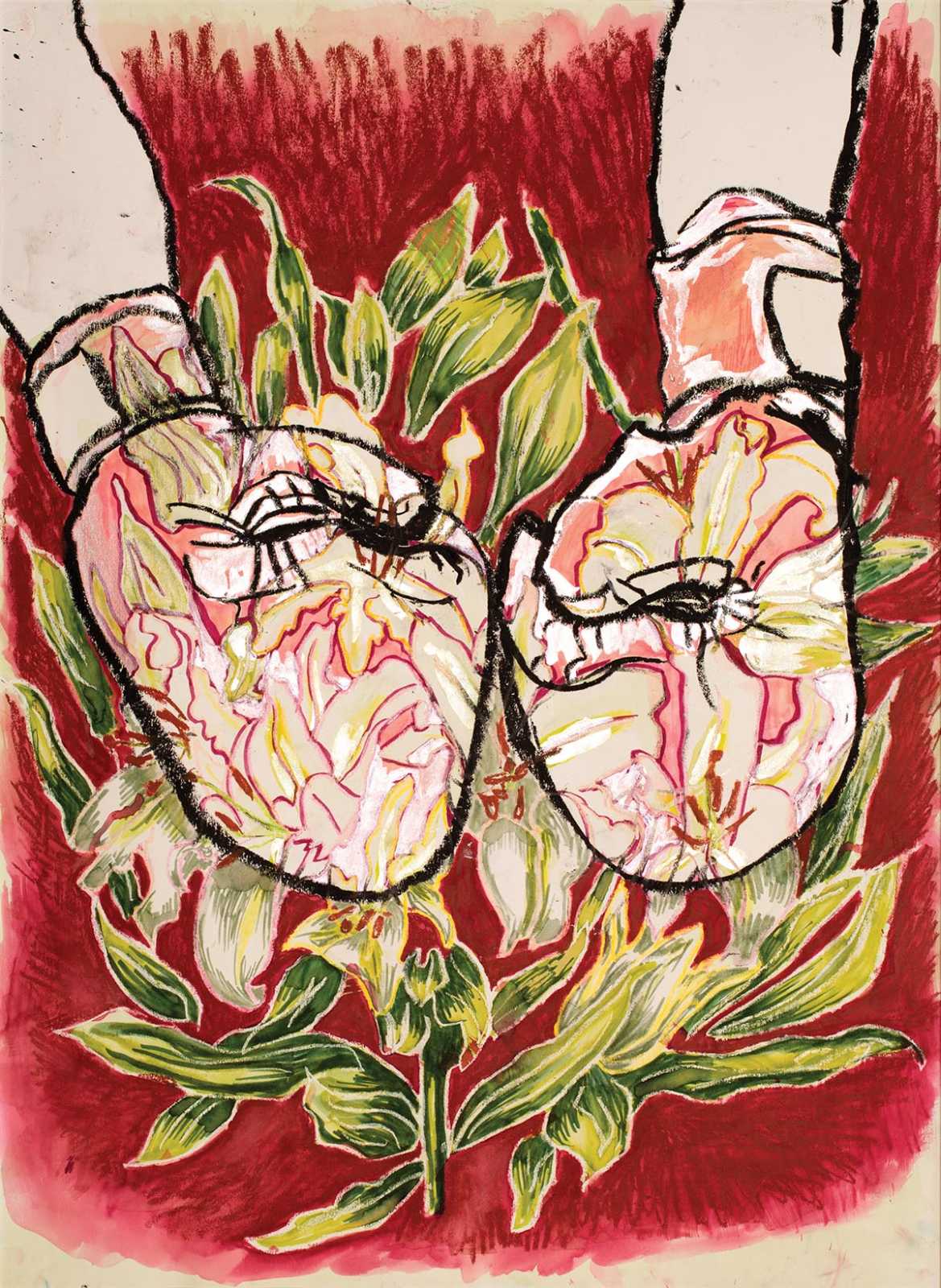 ML: The pieces in Undefeated feature boxing gloves that are decorated with floral patterns. What inspired this subject matter?

JZ: When I started thinking about this show, I was thinking about the first time I went to the hospital for treatment and how I was really scared when I entered the treatment room. The doctors rolled me in and I didn’t know what was going to happen. So I started thinking about what I would have wanted on that day. What type of vibe would I have needed when I was in there? And then I thought a lot about the people that I see who seem like they’ve lost hope, and there have been moments when I’ve felt hopeless, but ultimately I came to the conclusion that I just wasn’t going to give up in any way. I really wanted to, maybe even in some small way, spark a little bit of rebellion back and show that bit of humanity in me that just wants to fight—wants to say, I want to be around. I’ve been thinking so much about what’s going on in this country at large, especially politically, and we all need a little bit of fight right now. We all need to remember that there are reasons to keep fighting and there are reasons to want to be alive. That’s where the boxing gloves come from. And the juxtaposition of the floral patterns is a reminder to revive and nurture that spark in myself and in other people to keep going because sometimes what you might need to keep going is to lay back and take it easy. Some moments it’s appropriate to say, I’m ready to fight. I’m ready to stand my ground. And then there are other moments where you need to be delicate like a flower, and you need to nourish your soul more, and maybe go into a quiet room and just become present with your own self and your own emotions.

JZ: Yeah that’s a really good point. I never thought of it that way. 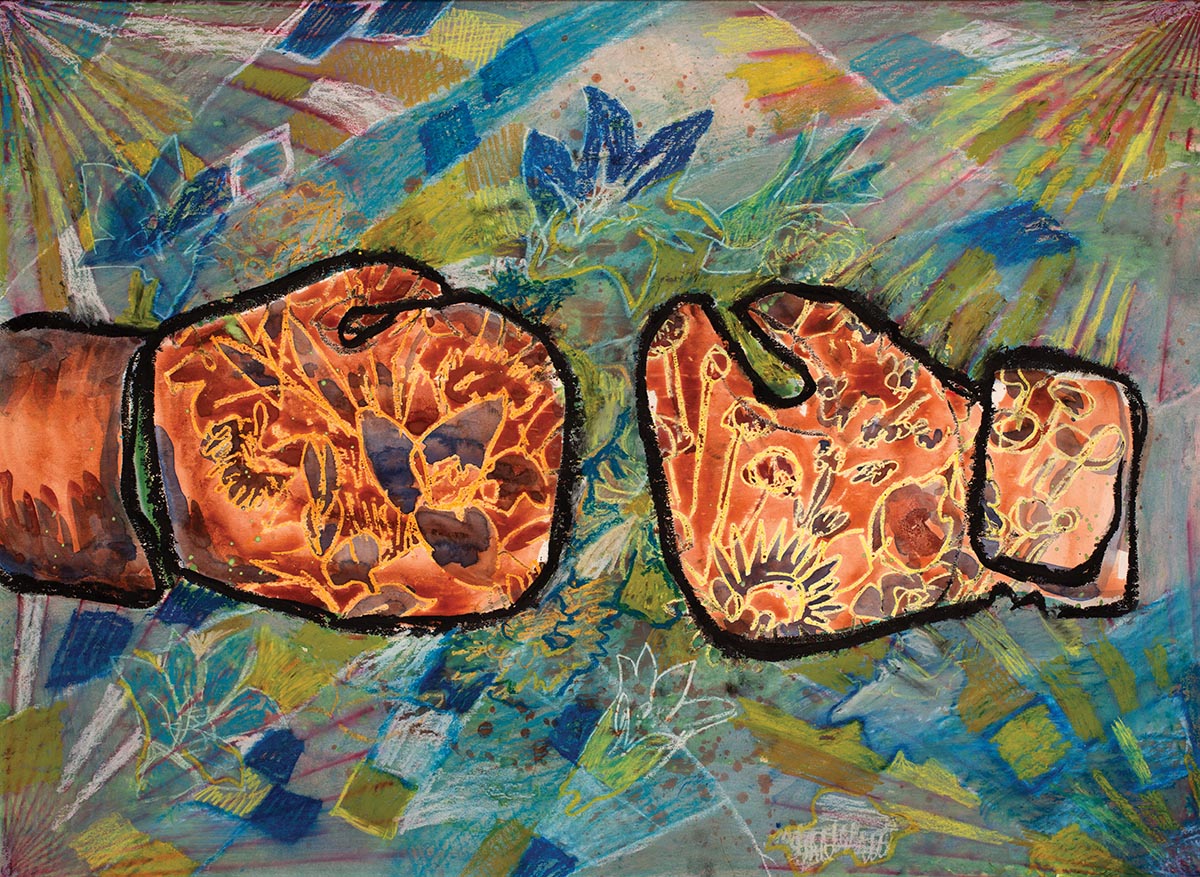 ML: I think anybody who studies boxing will tell you that it’s probably just as important to be able to take a punch as it is to be able to land a punch. And sometimes you just get punched in the face.

JZ: Right. Even in between the rounds when you’re sitting down and they’re feeding you the water is important. Finding a good team for yourself, finding people who help you fight, is important. It all affects your ability to perform and survive in that moment—it’s a whole network of things. It’s not just about how hard you can hit; it’s about how to sustain. Life can be really scary, and there are lots of things in the world that scare people. This show isn’t about being scared or not being scared; it’s just a representation of what it means to struggle. It’s about finding myself and maybe helping other people in my situation to find themselves. It’s about relating to each other and reaching out and connecting. 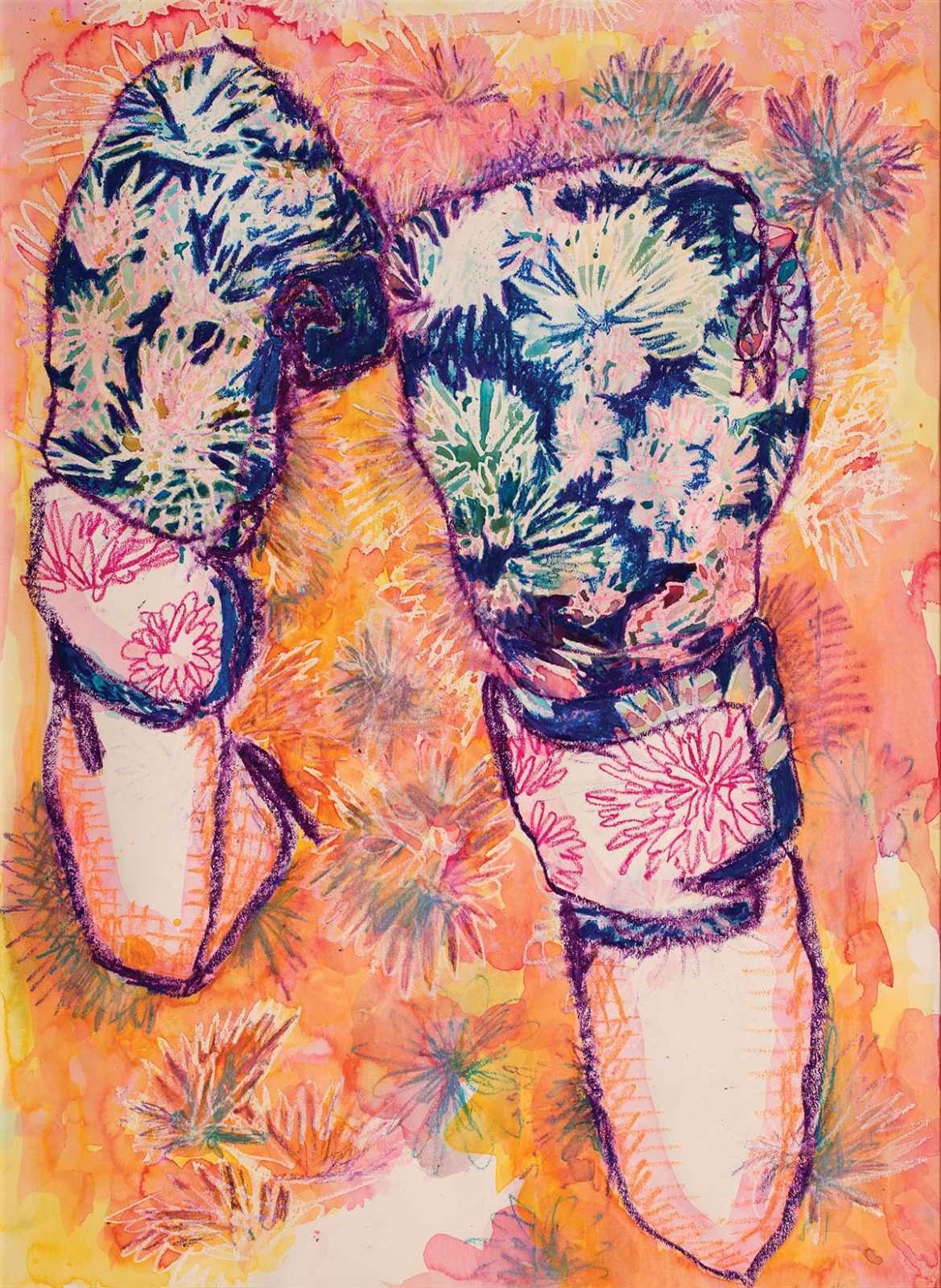 Undefeated features sketches and paintings by both Jessi and her mother, Kathy. In Kathy’s statement on the show, she writes, “Jessi had a studio at one end of the house, and I had mine at the other end. The experience [of Jessi’s illness] was getting so intense that I started painting in every spare moment I had. It wasn’t long before my nightmares and sleepless nights went away. My attitude was better and I could breathe. My art became about healing and not feeling hopeless, and about celebrating life.”

Undefeated will be on display at Julia Martin Gallery from June 17 through June 28. The show is co-sponsored by Woodcuts Gallery and Framing and Midtown Printing. For more information, visit www.juliamartingallery.com. 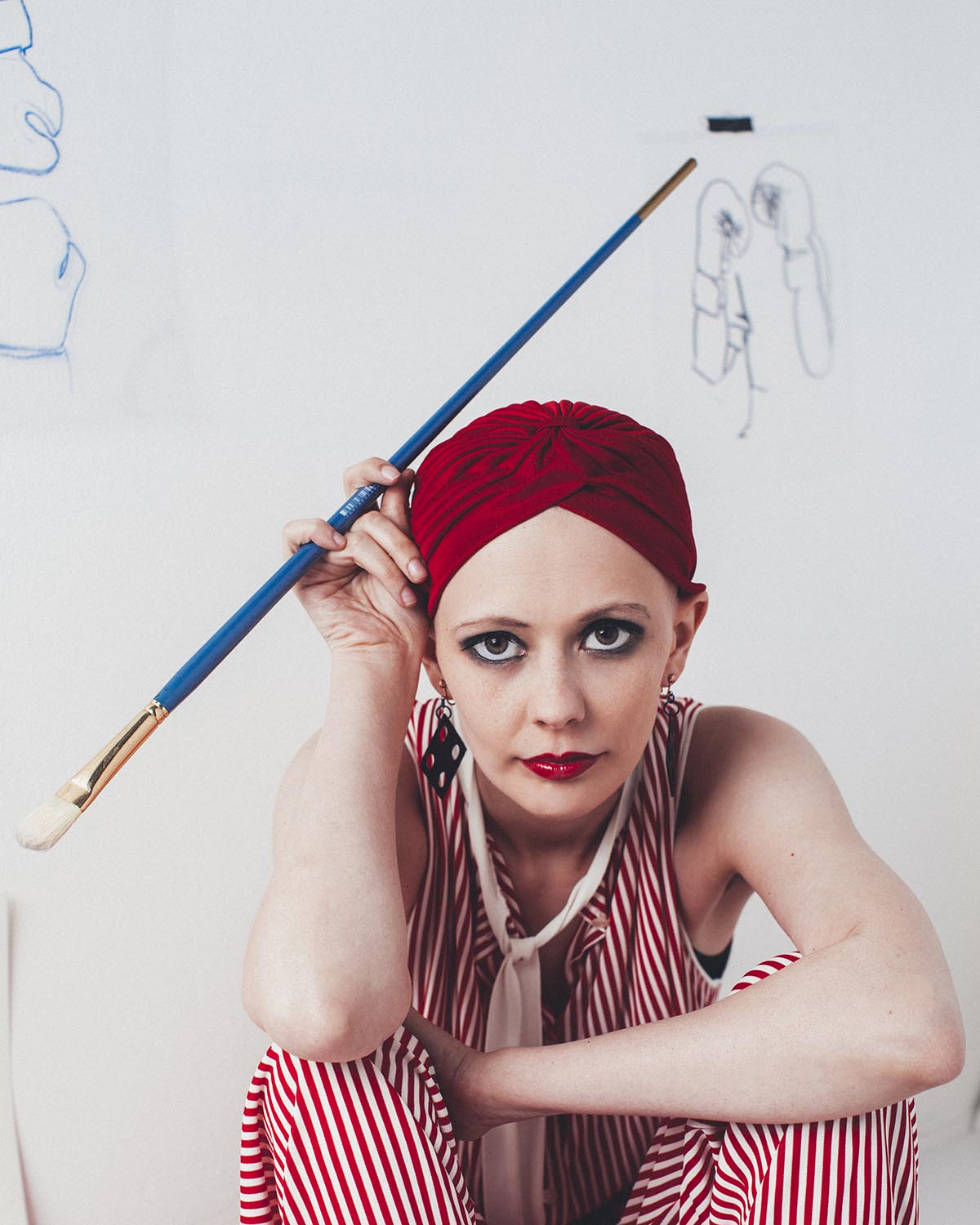