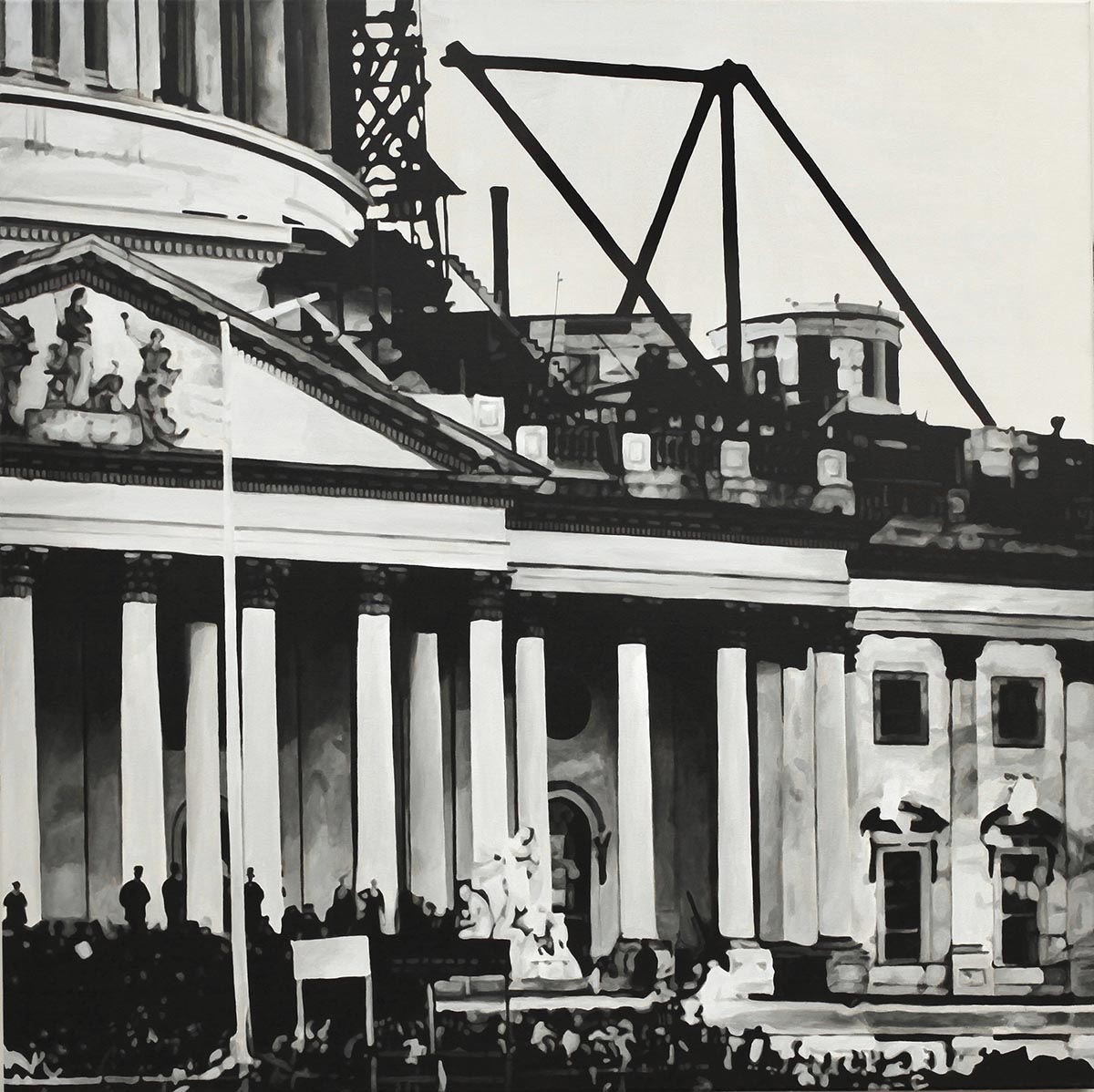 Better Angels, the newest body of paintings by Dane Carder, follows the artist’s arc over a decade of working from historic images. In this solo exhibition at the Red Arrow Gallery, Carder navigates the grey spaces between realism and abstraction, intention and deception, politics and perspectives.

Carder’s work has been known for his sensitive translations of Civil War photography and design, his tendencies towards the photorealistic humanized through the translucence of light that rises through his washes and underpaintings and softened by a generosity of evident brushstrokes in all the key places. Though the subject matter can be grim or gruesome, Carder has often employed large negative spaces or repeating patterns as a way of calming the eye, allowing the viewer places to rest among subtle sepias and dark, quiet stretches.

His Inauguration Day series gives few such mercies, and they are powerful for this rigorous refusal. The palpable tensions create a sense of menace more outspoken than his War Wounds exhibition at Nashville’s Parthenon; the work in Better Angels is openly and vocally darker. It’s a choice made partially in the layers of paint: with fewer washes and glazes, the opaque areas of acrylic and oil push against themselves, mimicking the pressure of the depicted crowds in how they jostle against the shoulders of another color. Even the shadows carry color shifts up in subtle coils of stroke, creating a nearly imperceptible movement that lends to the building of energy. 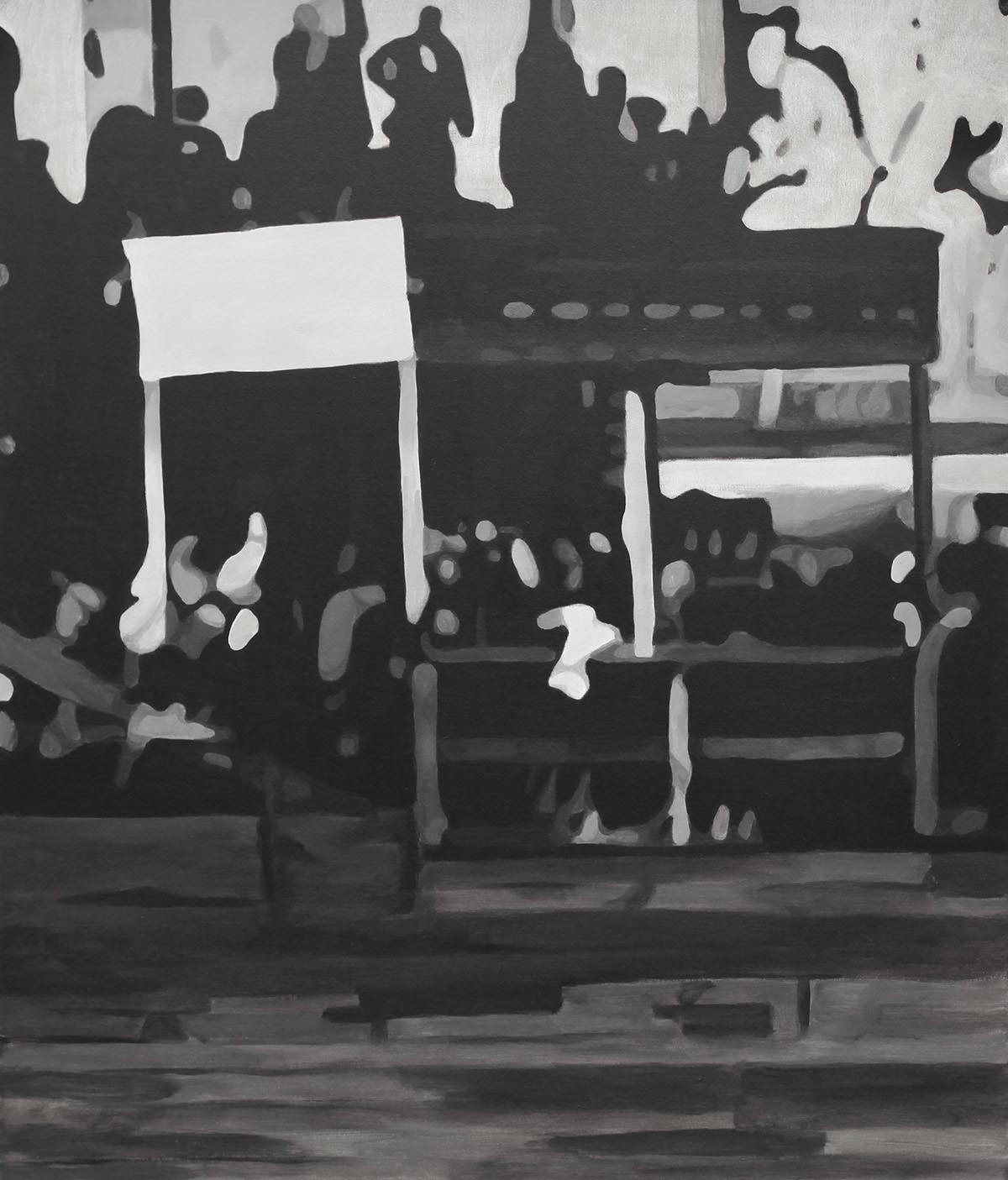 The tension builds also in Carder’s compositional choices. There’s an acute sense of scale, of the magnitude of the structural mechanism that is American government, rising about the scene in bold declarations of line and architectural landscape, dominating the faceless mass that is the crowd. There is reverberation. There is a sense of the unknown.

“Often I like my paintings to have a sense of peace, but this doesn’t,” Carder acknowledges. “It’s as if I’m trying to find comfort with the discomfort.” Though the work didn’t start as a dialogue on current politics, he admits that the conceptual dialogue has begun to echo against his own reality of contemporary tension. “[The photograph depicts] a time when the country was about to go to war with itself. I knew I wanted to deal with the imagery of a country on the brink.” Carder pauses. “Our country seems as divided as ever.”

“I knew I wanted to deal with the imagery of a country on the brink. Our country seems as divided as ever.”

His previous work had followed a long arc, ultimately pushing towards the annihilation of recognizable image. The painting, rather than as a window through time, had become much more focused on the act of painting, which followed in a series of paintings every week, “looking at painting for painting’s sake.” Better Angels gathers this course, damming it into swift waters for a single body of work. 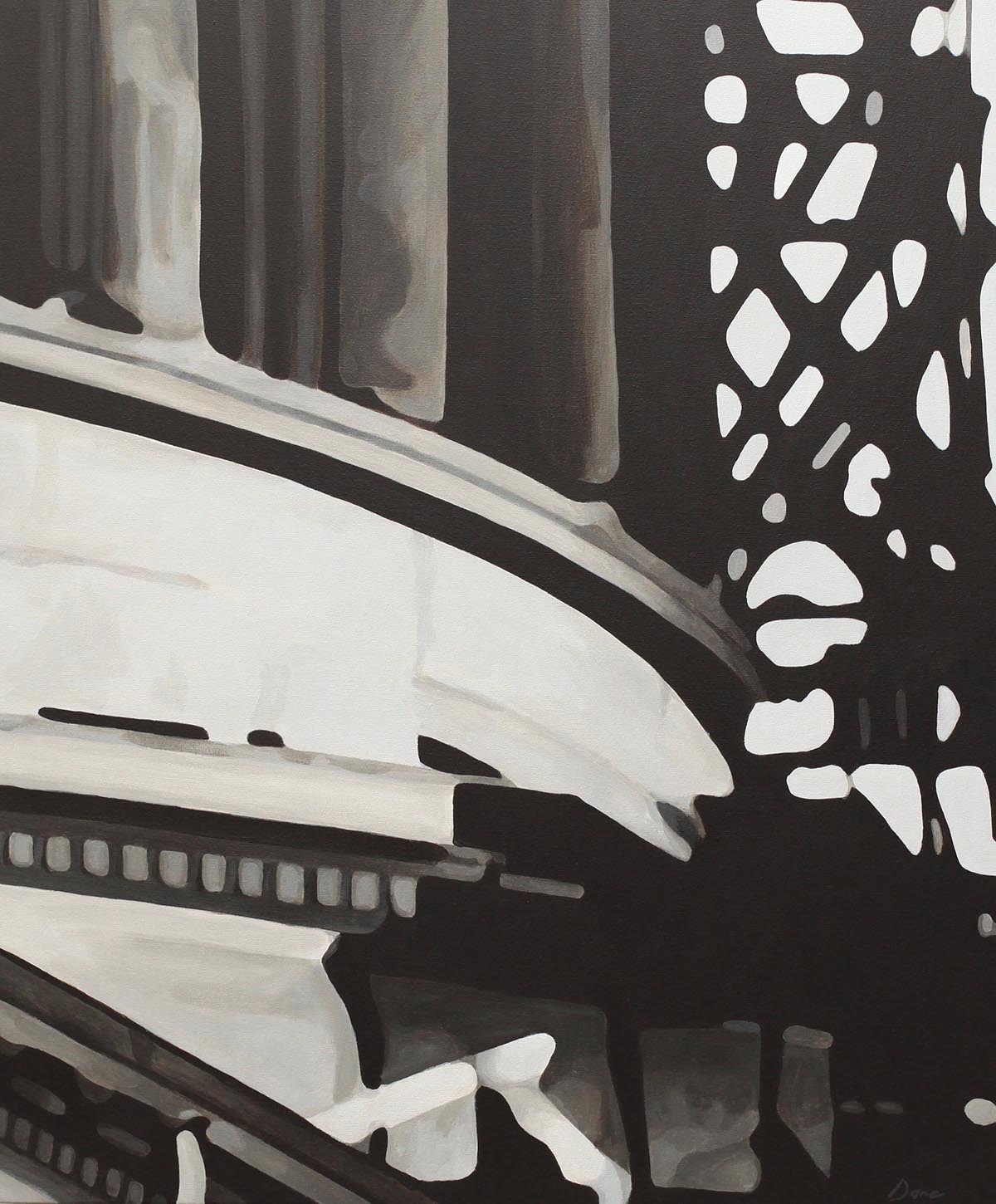 The references draw from a single photograph depicting the inauguration ceremony of Abraham Lincoln. The image itself is small but crisp, the square-foot size crammed with scenery and figures whose features are blurred by the long exposure time and the whipping of wind. Carder sourced the photograph from government archives online, the printed copy forming the master source for the dozens of xeroxed pages he uses as reference.

The process of source becomes yet another deliberate piece of Carder’s conversation around intention and representation: The scene was framed by the photographer’s intentions; the image itself was chosen for the archive to represent this moment in history. Now chosen by Carder, the process of xeroxing reduces the image into pixels and blurs, further abstracted and questioned through a material translation. The larger image fractures into smaller paintings and tighter close-ups of the crowds, each figure disintegrated into groupings of paint, which are simultaneously presences in their own rights, but also meld into anonymous shapes and indiscernible objects. It’s a long dialogue about the idea of framing perspective and context that serves to drive Carder’s investigation. “There are familiar notes, but they don’t make sense. You’re caught trying to grasp what we are witnessing.” 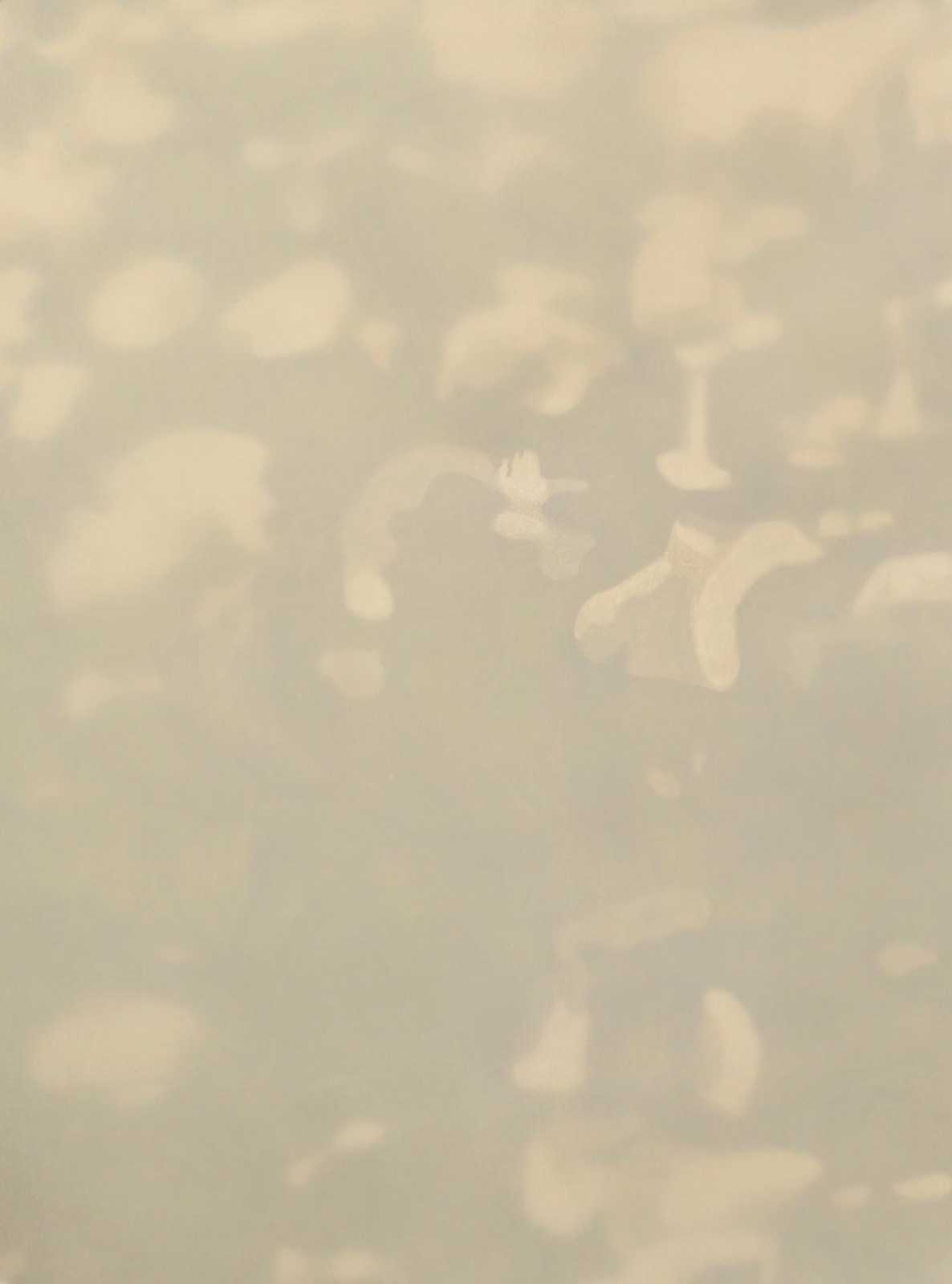 The final three works on paper are obscured by a layer of vellum, a hand-stained mask of oil that works to obscure, distort, distance, separate, and disguise. They are apt metaphors for Carder’s unease and determination to look deeper. “Where we are [in history], it all comes down to what are you seeing? What are you really looking at, contextually? Is a story of history being told?”

Better Angels is on view through May 15 at Red Arrow Gallery, which is open Saturdays 11 a.m. to 5 p.m. and by appointment. On Thursday, May 4, at 6 p.m., Paul Polycarpou of Nashville Arts Magazine will lead an artist talk with Carder. Learn more about the exhibition at www.theredarrowgallery.com and about Carder’s work at www.danecarder.com. 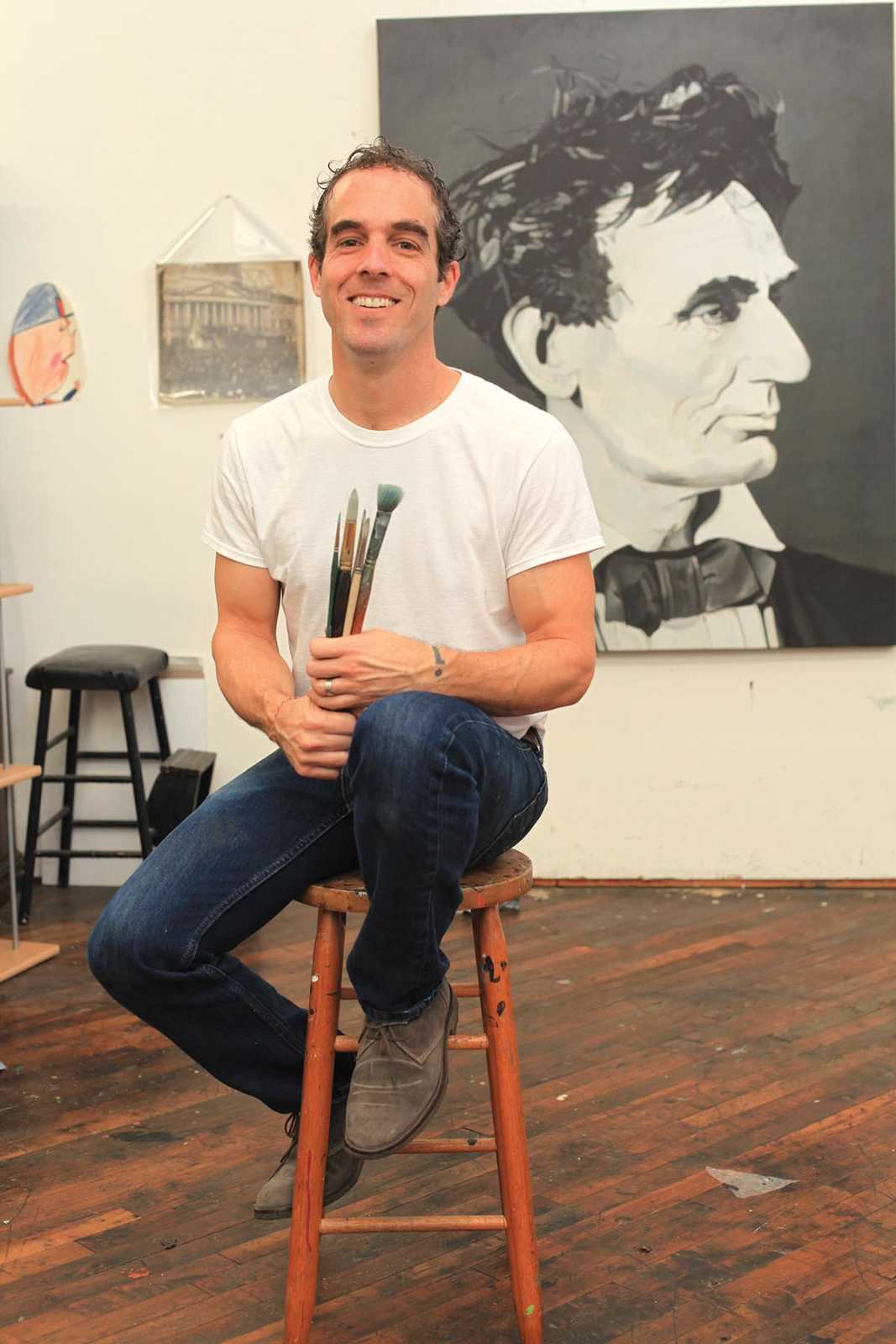