The Queen City Is Busting at the Seams with Contemporary Art

For more than two centuries, art lovers have headed to Cincinnati for beautiful creations. When America expanded westward early in the 19th century, the “Queen City of the West” quickly became the nation’s fourth-largest city, topped only by New York, Boston, and Philadelphia. Even today it’s still a top destination for the arts, with numerous high-quality offerings not found in most Midwestern cities. 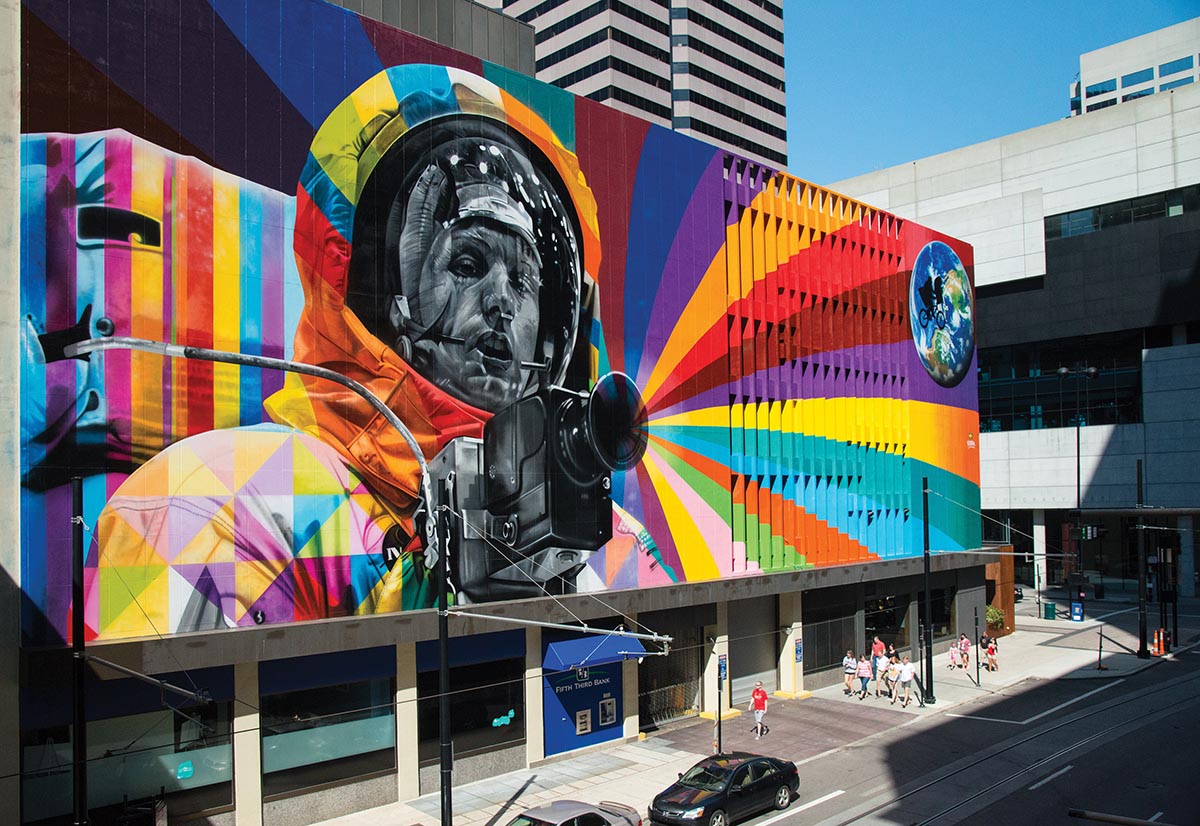 In a weekend trip you can take in a lot. Begin with a historical perspective via the Cincinnati Art Museum’s Cincinnati Wing in picturesque Eden Park. (It’s a quick cab ride from downtown hotels.) The oldest art museum west of the Allegheny Mountains, the comprehensive museum (more than 67,000 objects spanning 6,000 years) was the first in the nation to add permanent galleries, providing evidence of the city’s early arts prominence (1839–1900)—from paintings by noteworthy 19th-century artists to gorgeous Rookwood pottery and numerous examples of art-carved furniture. Contemporary South African artist William Kentridge’s More Sweetly Play the Dance is currently making its North American museum premiere at the Cincinnati Art Museum through January 28. 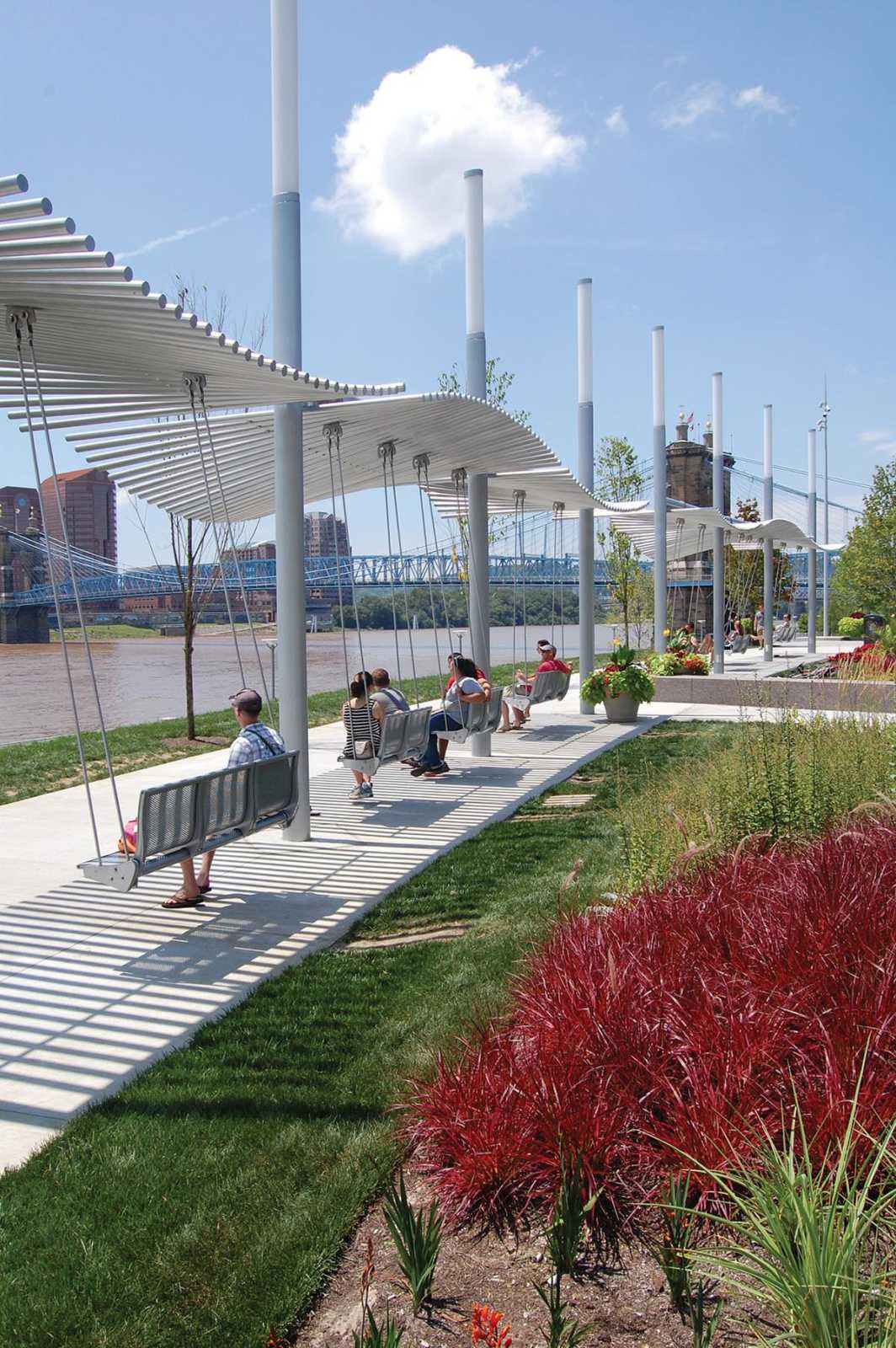 The Art Academy of Cincinnati, initially part of the museum, has been making artists since 1869, the same year the Cincinnati Reds became America’s first professional baseball team. Painter Frank Duveneck (1848–1919) trained there, then became an influential teacher and ultimately its president. Painter John Singer Sargent termed him “the greatest talent of the brush of this generation.” Duveneck taught many American impressionists, including Dixie Selden and John Henry Twachtman. (Their works and others are on display at Cincinnati Art Galleries, 225 E. Sixth Street, through June 17.)

Galleries can be found throughout downtown and historic Over-the-Rhine, a neighborhood immediately north of the city’s heart where Victorian Italianate architecture and redevelopment have blended in a spectacular renaissance of urban living and commerce. The Art Academy, offering six B.F.A. degrees, is today a neighborhood (1212 Jackson Street), as is the School for Creative and Performing Arts (108 W. Central Parkway), America’s only K–12 public school for the arts. The heart of Over-the-Rhine is Washington Park, dating from 1850, today featuring verdant vistas, fountains, a public green, a playground, and a dog park. (It has its own underground garage.)

Another important stop for art lovers is the beautifully restored Taft Museum of Art (316 Pike Street), an 1820 example of Federal architecture in the Palladian style, today the city’s oldest domestic wooden structure. It subsequently was home to the legendary political family that included a president, a Supreme Court justice, and a U.S. senator. Art collectors Charles and Anna Taft furnished it with paintings, ceramics, and art from around the world. They donated it all to the city in 1927, and it became a popular small “house museum” featuring a gorgeous garden and space for temporary exhibitions. 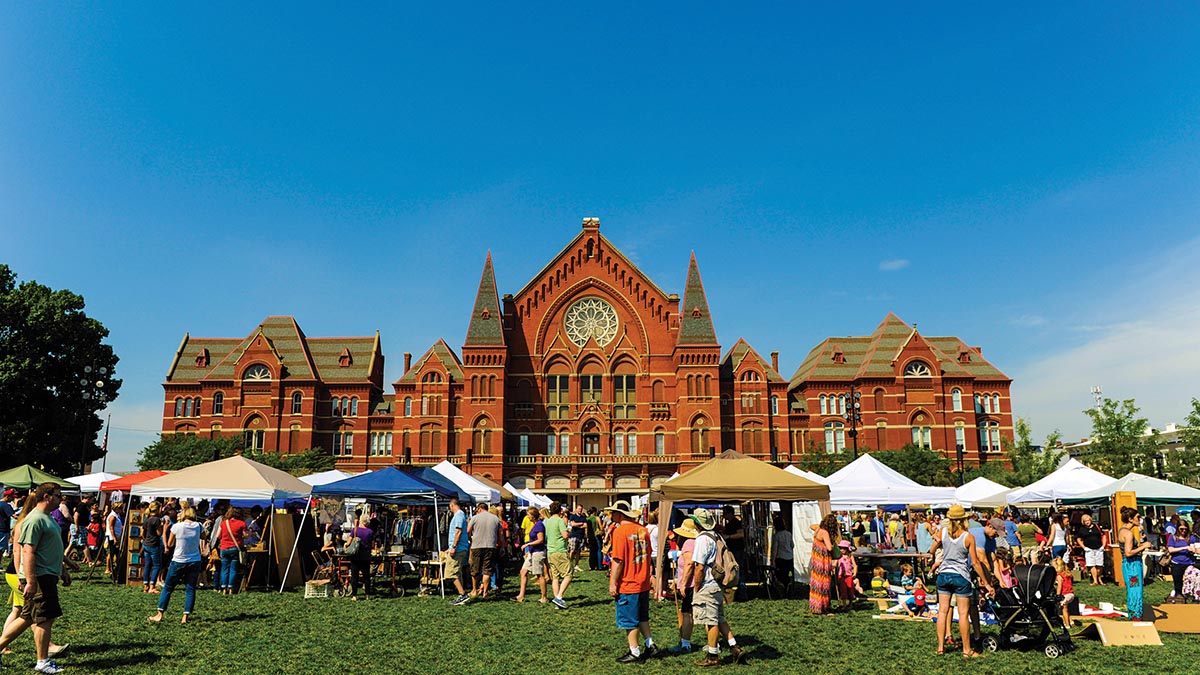 Where to stay? 21c Museum Hotel (609 Walnut Street) is made for art lovers, with its own gallery offering changing exhibitions of modern art. Its next-door neighbor is the Contemporary Arts Center (44 E. Sixth Street), a startlingly contemporary building designed by the late Zaha Hadid, a Pritzker Prize winner and the first woman to design a major art museum in the United States. The Center proudly exhibits “art of the last 15 minutes.” Across Walnut Street from 21c, in the Aronoff Center for the Arts, is the Weston Art Gallery (650 Walnut Street), presenting an eclectic mix of emerging and professional artists. 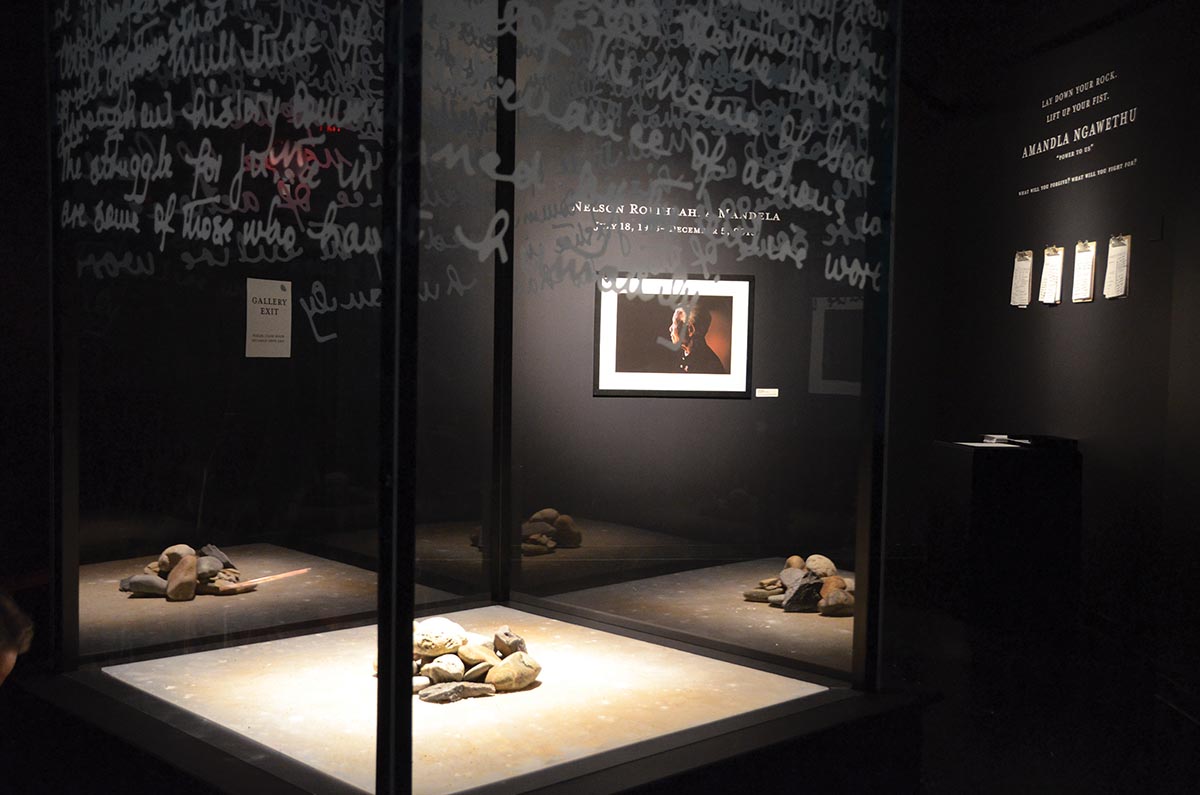 Mandela: The Journey to Ubuntu; Courtesy of UNRFC

To travel to numerous art attractions, step onto the newly launched streetcar the Cincinnati Bell Connector with several stops on Walnut Street along its 3.6-mile loop. At Fountain Square you can visit the 1871 Tyler Davidson Fountain, cast in Munich by August von Kreiling. The fountain’s gracious Genius of Water offers numerous portrayals of how water impacts people’s lives.

A bit farther south, the streetcar can drop you near the National Underground Railroad Freedom Center (50 E. Freedom Way). It features powerful historic displays as well as art focused on broader issues of freedom and justice. Mandela: The Journey to Ubuntu, an exhibit commemorating the life and legacy of former South African President Nelson Mandela through photography by Matthew Willman is currently on view. The Freedom Center is on the northern edge of downtown’s beautiful Smale Riverfront Park with public sculptures and recreational areas.

All along the streetcar route, keep an eye out for murals adorning downtown walls. Talented young artists work under the auspices of ArtWorks, a nonprofit offering teens summer employment while beautifying the city. More than 130 murals can be found on walls across Greater Cincinnati, including nearly twenty in the downtown area. (Walking tours are available.) 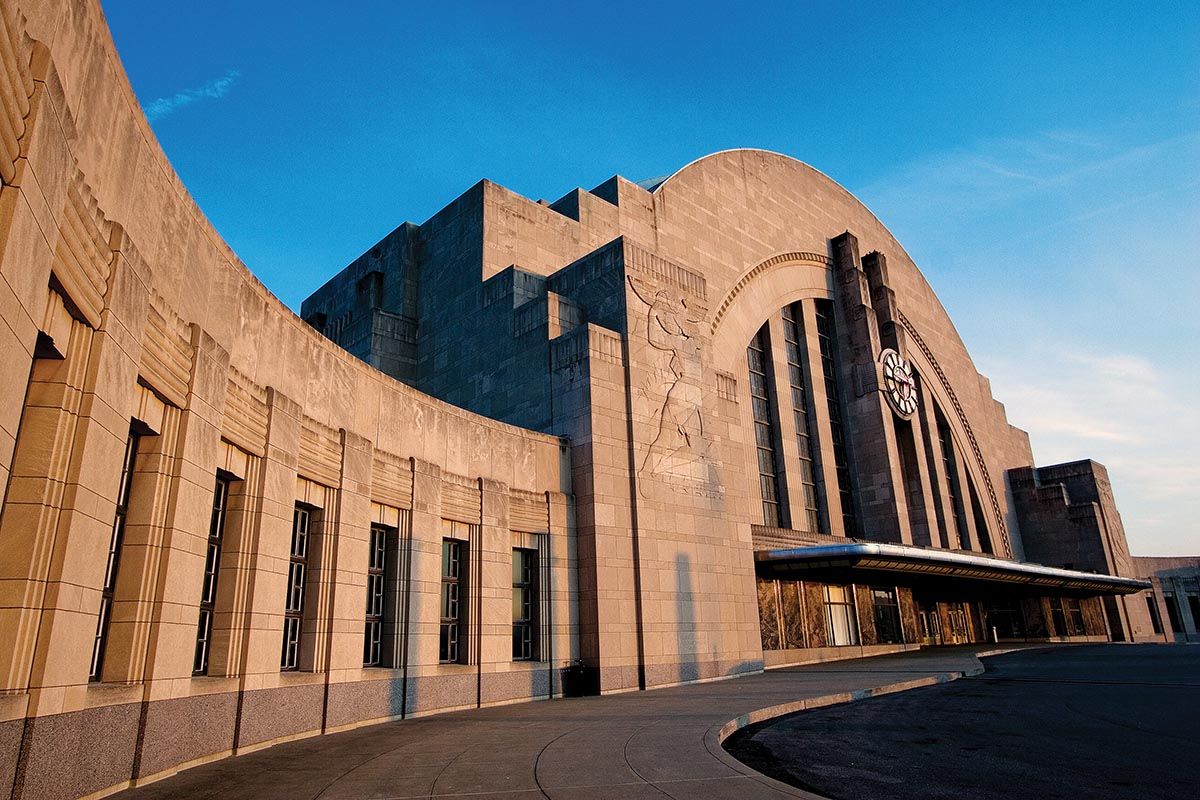 As the streetcar heads north you’ll journey past the Art Academy and Washington Park, where Elm Street is experiencing multimillion-dollar construction renovation of performance venues, including a new Cincinnati Shakespeare Company theater and the legendary 1878 Music Hall, home of the Cincinnati Symphony Orchestra, Cincinnati Opera, and Cincinnati Ballet. Wash Park Art Gallery (1215 Elm Street) is nestled among these attractive buildings and is unveiling their exhibit Midsummer Dreams / We Are Such Stuff with a reception on July 14 from 5 until 8 p.m.

The streetcar strikes north for a few more blocks to loop around historic Findlay Market, dating from 1850, the oldest continuously operating public market in Ohio. In addition to vendors of produce, meat, cheese, candy, and more, it’s easy to find the work of local craftsmen during busy weekend hours. 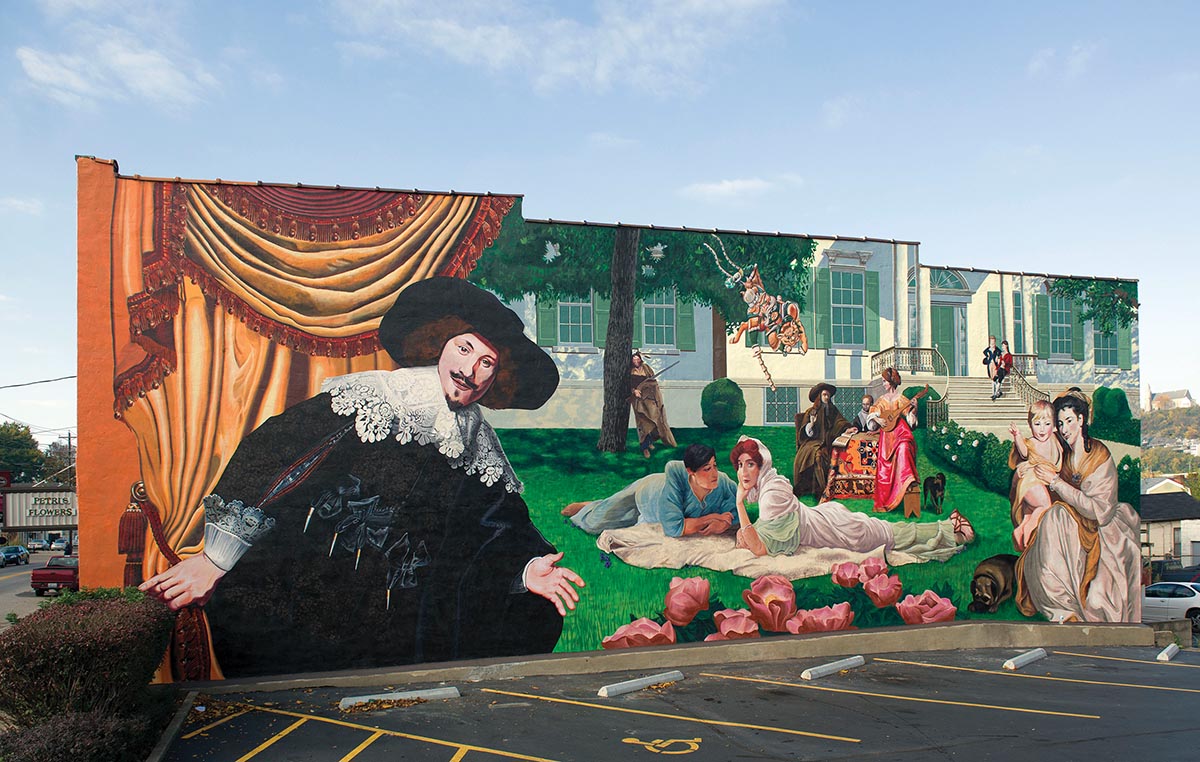 A unique stop for art lovers is the new home of Rookwood Pottery, with roots in the 19th century when Maria Longworth launched a studio in 1889 that made award-winning art pottery and ceramic tiles that still grace many a Cincinnati fireplace. Rookwood nearly dropped out of existence in the late 20th century, but it’s been brought back and today manufactures beautiful decorative items in a former produce warehouse just north of Findlay Market (1920 Race Street). There’s a showroom there that’s open to the public, as well as a retail shop (1209 Jackson Street), close to a streetcar stop on 12th Street, close to the Art Academy. 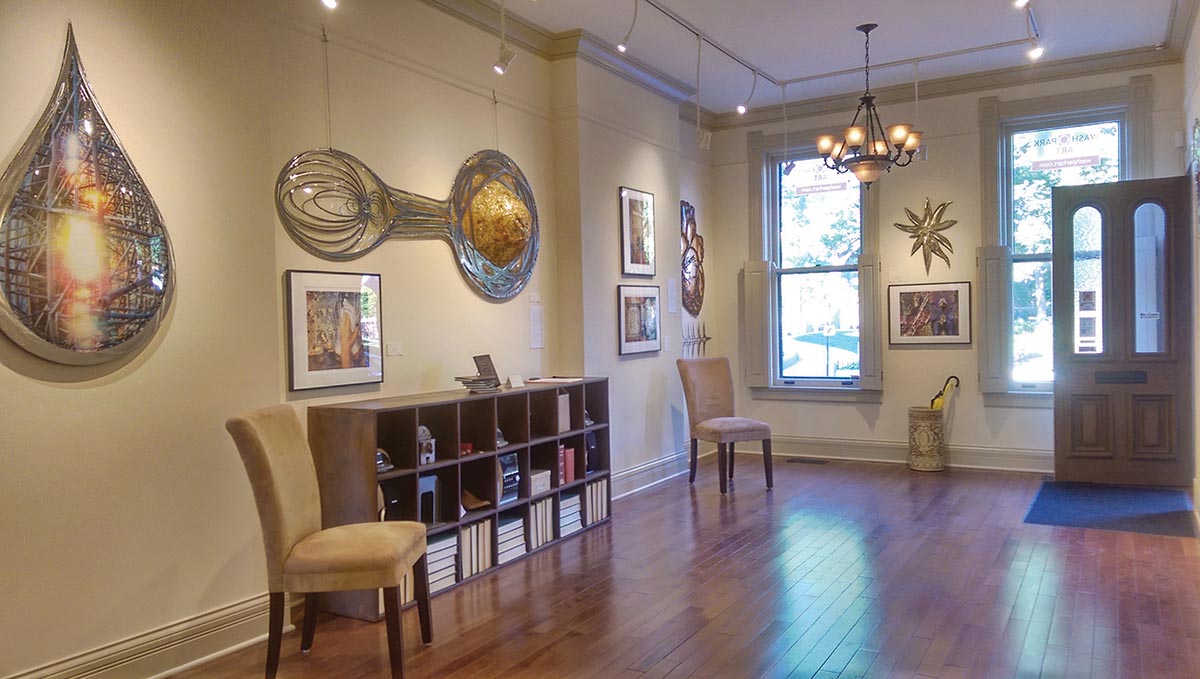 Also worth a visit: Marta Hewett Gallery (1310 Pendleton Street, in the east end of Over-the-Rhine) has a special emphasis on glass. It’s part of the Pendleton Art Center, once an eight-story furniture warehouse that is today a honeycomb of artist studios, open for gallery walks on the final Friday of every month. 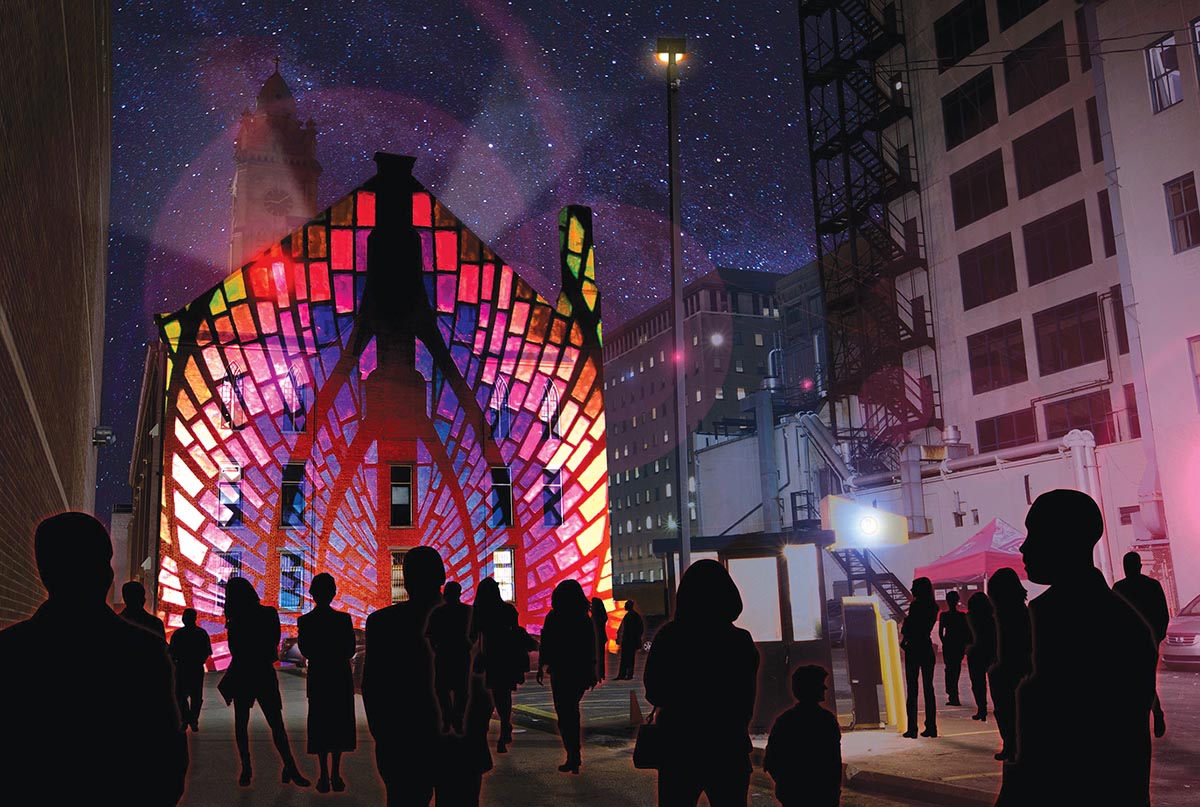 As many as a half-million art lovers are expected to flock to Southwest Ohio for BLINK Cincinnati October 12–15, 2017, a four-day light and art festival. The free event, covering 20 blocks along the city’s new modern streetcar line, will feature large-scale architectural projections and interactive animation bringing to life murals and other iconic urban facades. Traveling from the city’s gorgeously landscaped Ohio River banks to Findlay Market, attendees will see dozens of light sculptures and street-level creations. Corporate sponsors have lined up to cover the festival’s $3 million price tag.

If art’s your thing, your next destination should be Cincinnati. na For more information, please visit www.cincyusa.com and www.cincinnatiusa.com. 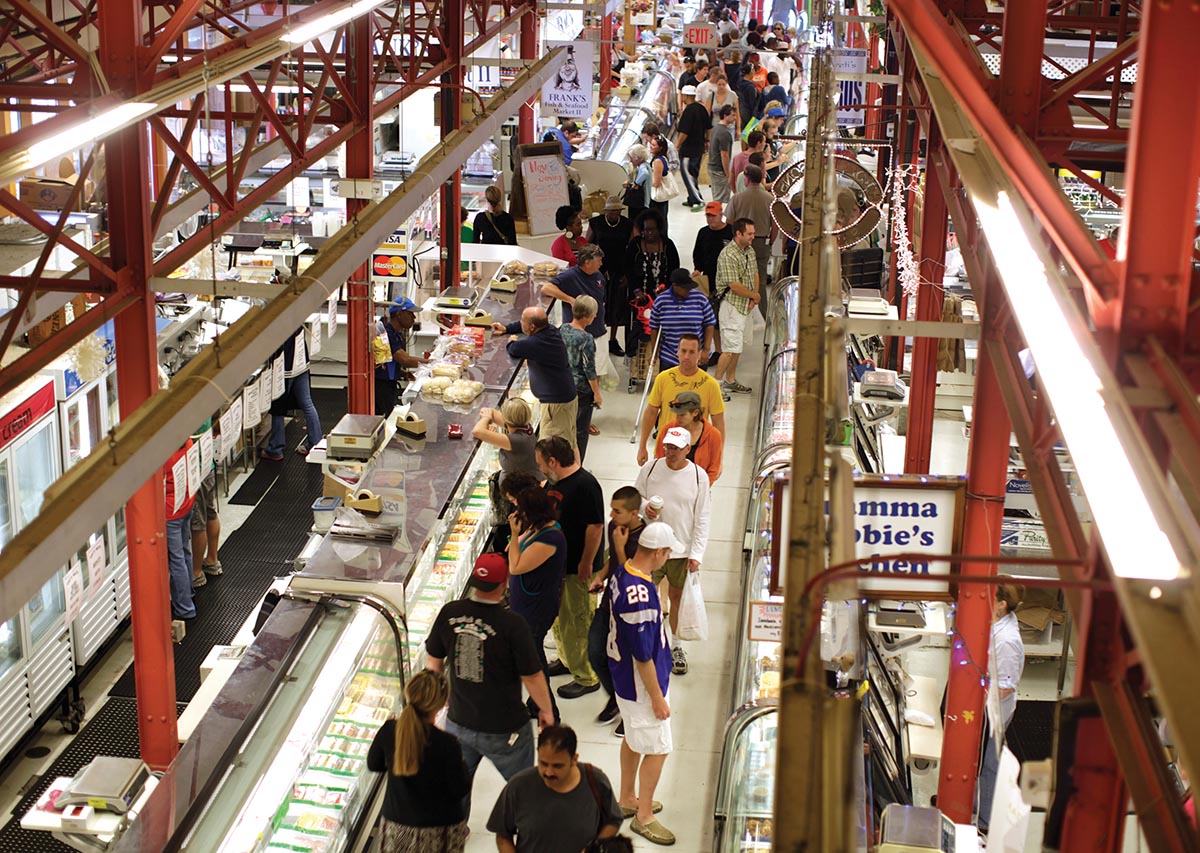 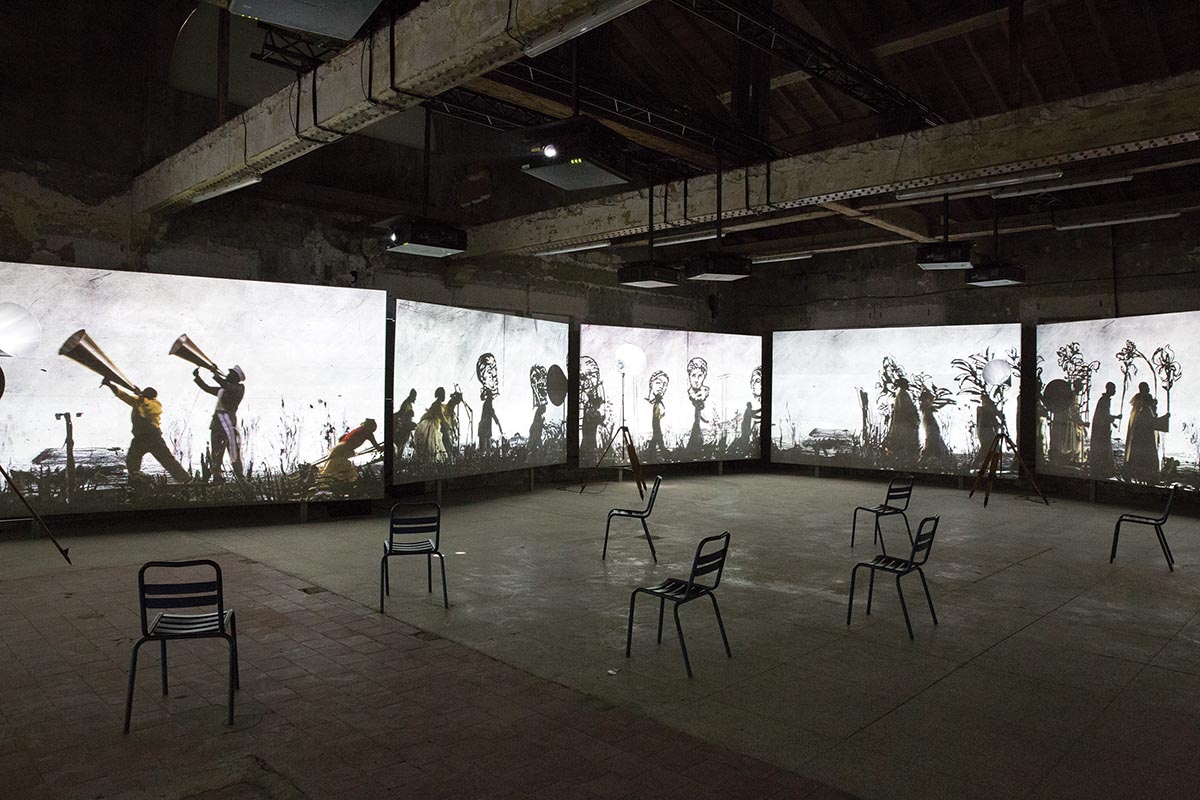 “Galleries can be found throughout downtown and historic Over-the-Rhine, a neighborhood immediately north of the city’s heart where Victorian Italianate architecture and redevelopment have blended in a spectacular renaissance of urban living and commerce.” 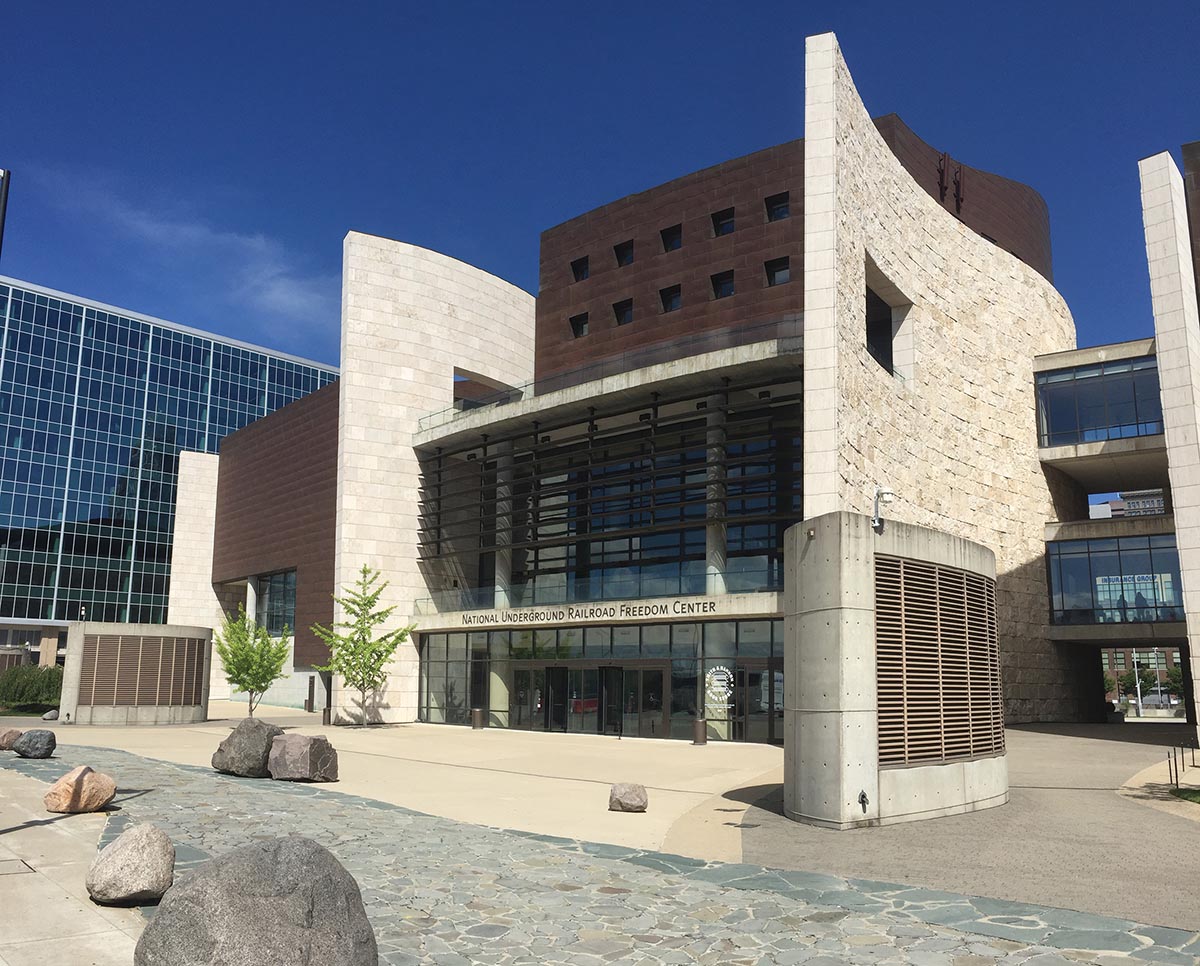 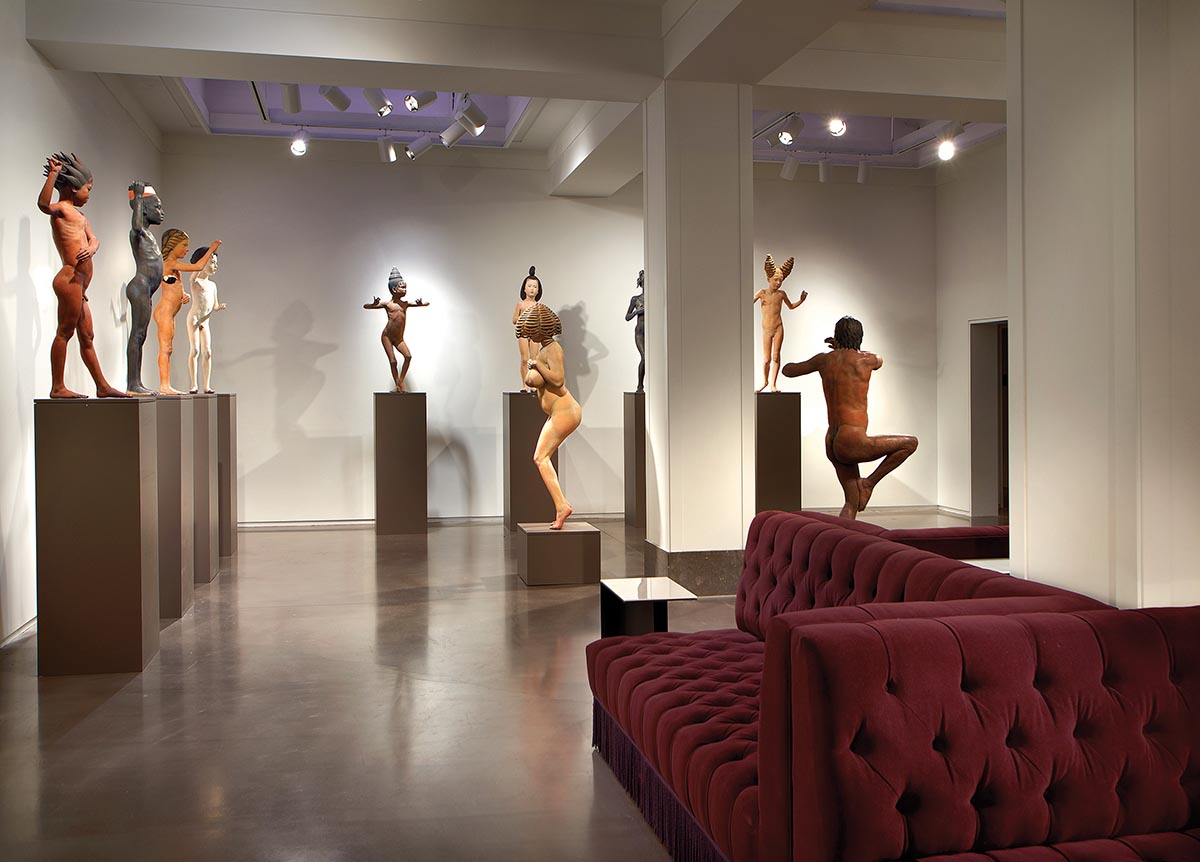