Frist Center for the Visual Arts through September 10

“Each grouping is like a show within a show,” explains Frist Center chief curator Mark Scala of the organizational strategy behind State of the Art: Discovering American Art Now, an ambitiously comprehensive sampling of contemporary art from across the United States. This seemingly small insight from Scala, aside from liberating the visitor to wander at her own pace, is arguably one of the most important clues to understanding the layered effect of State of the Art. “The exhibition was intended to convey the breadth, quality, and generous spirit of much of the art being made across the country in recent years,” with special focus on artists working outside gallery and museum hotbeds, and consequently, the curators amassed a wide range of imagery, emotion, and media over 100 works of art.

Originally co-curated in 2014 by Don Bacigalupi and Chad Alligood for the Crystal Bridges Museum of American Art in Bentonville, Arkansas, State of the Art is the final product of hours upon hours of travel and research and approximately one thousand artist visits coast to coast. Though half the size of Crystal Bridges’ original presentation, the Frist Center’s smaller version of 45 works doesn’t feel small at all. The novelty of medium contrasted with the familiarity of subject matter for many pieces vastly occupies the mind, conveying a fullness of space and experience. State of the Art “features artworks that are intellectually accessible and deeply personal and that open us to a consideration of things important to everyone: the environment, family, politics, race, and the need for transcendent beauty,” according to Scala. The widespread layout of State of the Art can be overwhelming, and while they are not designed to be seen in any particular order, the exhibition’s thematic divisions work as a catalyst for both comprehension and thoughtful analysis: Nature’s Edge; Anxious Americans; Self, Family, and Community; Process and Materials; and Transformation.

“Perhaps more than anything in State of the Art, what hits home for me are works that address issues of poverty, immigration, and race. Artists addressing these issues do not happen to be from Nashville, yet these are front of mind for many Americans, here as elsewhere.” 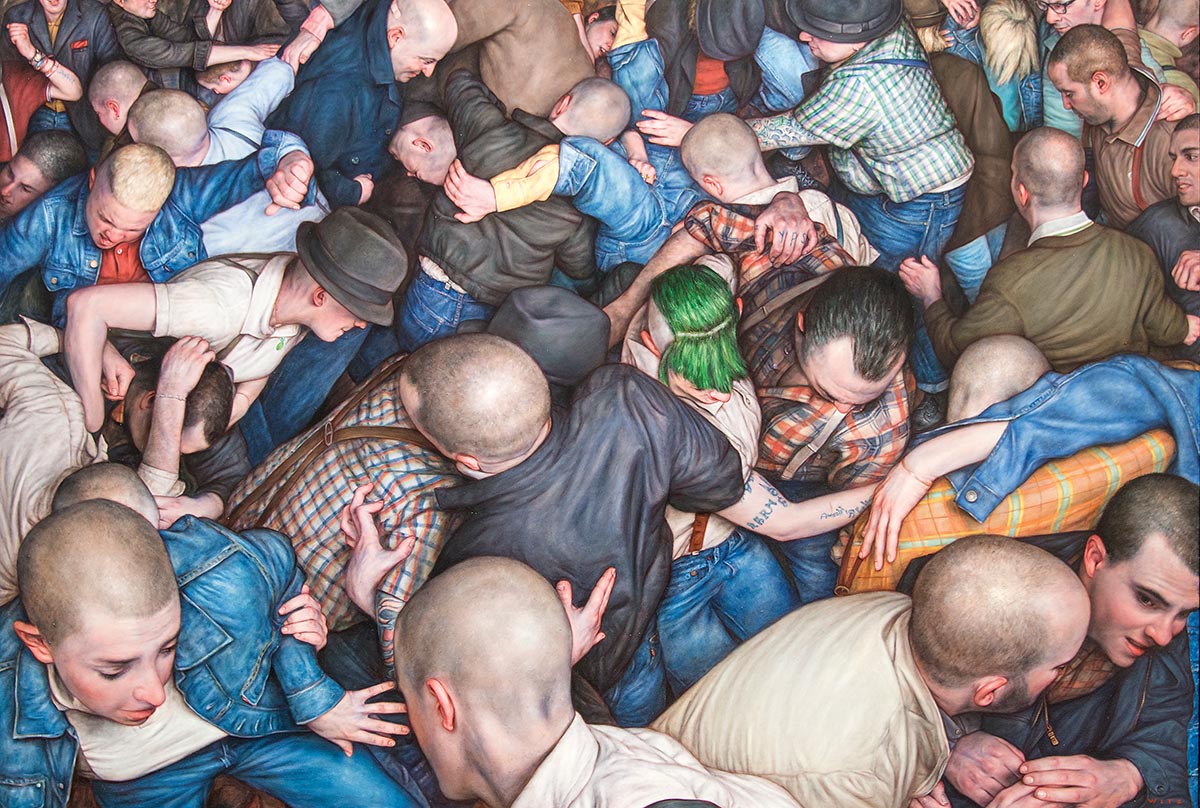 Selections from Joel S. Allen’s Hooked on Svelte (Colorado, 2012–2014) series greet viewers at the entrance of the exhibition and set us up well for the study of contradiction to come. As part of Nature’s Edge, blue- and orange-colored pom-poms hang from the ceiling on long ropes and, at first look, belie a natural textile form. Upon closer inspection, the pom-pom strands not only consist of twine, but also wine corks and plastic prescription pill bottles—a reminder of our population’s vices (substance abuse) and virtues (capacity to create). Following the same theme, Tennessee’s own John Douglas Powers mesmerizes with Ialu (2011), a kinetic sculpture that imitates the rustling of field vegetation against a cloudy blue sky. It would be a peaceful vision of reeds swaying back and forth if the reeds weren’t obviously metal and the clouds weren’t obviously a video projection, not to mention the pesky squeak of Powers’ motorized fabrication. Both works demonstrate our nation’s negligence of the natural environment and our false confidence to reproduce and adapt to a lesser version of it.

Moving into Anxious Americans, you can still hear the squeak of Powers’ Ialu, an interesting layer atop Bob Trotman’s Shaker (North Carolina, 2013), a rotating bust of a questionable businessman-type, and Kirk Crippens’ The Great Recession: Foreclosure, USA series (California, 2009), comprising four photographs that document abandoned office interiors in the wake of the housing crisis of 2008. “I am moved by the unexpected beauty, virtuosic technique, and often offbeat humor, which show how artists live and negotiate with uncertainty,” Scala comments. For example, Trotman’s Shaker rotates in the center of the room with his foreboding hand extended, by no accident monopolizing the visitor’s attention (and actively causing anxiety), and Crippens has ironically titled the empty scene of a lone dried-up plant sitting on an office shelf Plant on the Job, a lighthearted choice for such an unsavory time in recent American history. Dan Witz’s Byronesque III (New York, 2015) presents another brand of anxiety, depicting a mosh pit of entangled bodies caught somewhere between an ecstatic tribe and an angry mob, evoking discomfort and nervousness in the viewer. Witz’s academic, realist style of painting departs dramatically from the gritty subject matter, a refreshing juxtaposition. 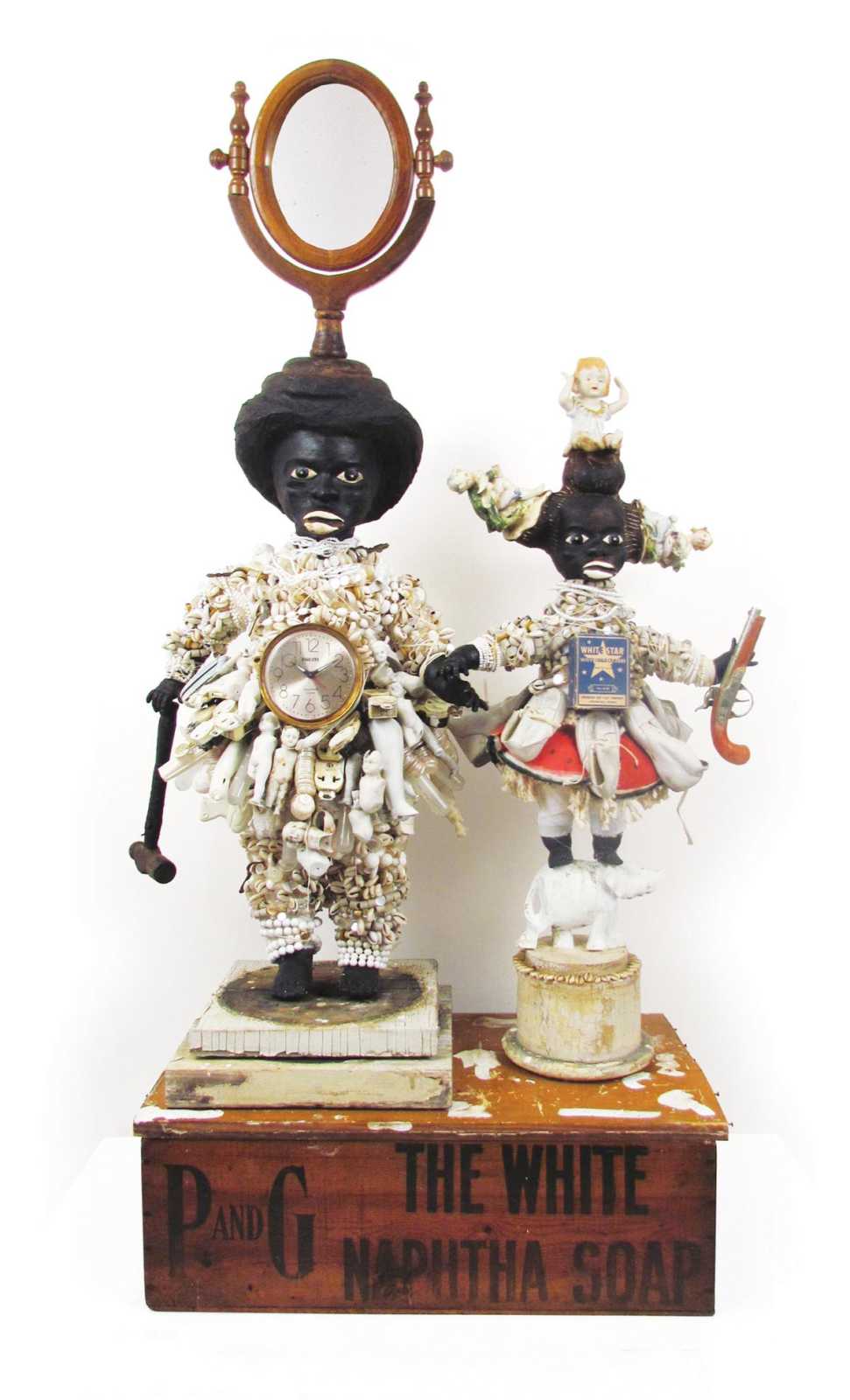 Perhaps one of the most eye-catching works in the exhibition is Vanessa German’s White Naphtha Soap, or Contemporary Lessons in Shapeshifting (Pennsylvania, 2013). In the section Self, Family, and Community, we are grounded by the deeper, more intimate connections of childhood, heritage, and spirituality. The concept and mixed media of German’s “power dolls” are drawn from West African effigies thought to embody the magical power of protection over at-risk children. The cultural diversity of the American people-scape is also highlighted in Process and Materials by Lauren Was and Adam Eckstrom’s Forever, Almost (New York, 2012). The missed opportunity represented by thousands of losing lottery tickets is redeemed through the beautiful geometric pattern they create, reminiscent of an Islamic prayer rug invoking self-reflection and contemplation.

State of the Art comes full circle with works of Transformation, such as Kim Cadmus Owens’ Smoke and Mirrors: Coming and Going (Texas, 2011) and Elizabeth Alexander’s Tea series (Massachusetts, 2014). Owens transports us from physical to virtual reality by incorporating the appearance of digital glitches in her cityscape painting, much like when a computer or phone screen freezes, calling into question the reliability of technology. Alexander’s work is equally as lofty in concept, examining the necessity of beauty in our lives. With their decorative floral elements invasively removed, three teacups are devoid of their original utilitarian purpose and therefore useless. Maybe beauty isn’t as frivolous as we thought.

“The exhibition was intended to convey the breadth, quality, and generous spirit of much of the art being made across the country in recent years.” 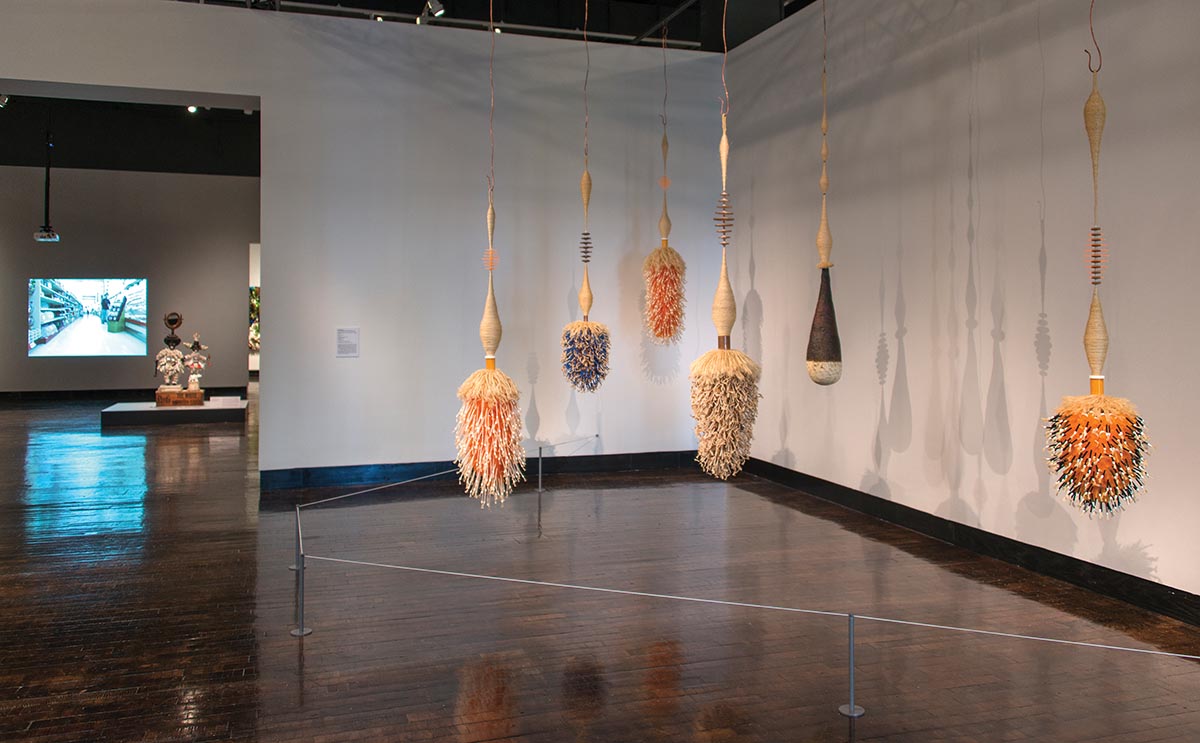 “Perhaps more than anything in State of the Art, what hits home for me are works that address issues of poverty, immigration, and race. Artists addressing these issues do not happen to be from Nashville, yet these are front of mind for many Americans, here as elsewhere,” remarks Scala. Humans aren’t simpletons that are concerned with only, for example, climate change and not racial inequality. So why wouldn’t you hear the hum of Powers’ kinetic sculpture while viewing German’s “power dolls” two rooms over, or, thinking more broadly, why couldn’t you live in Tennessee yet be affected by the same injustices as Pennsylvania? By nature, State of the Art is a microcosm of a much bigger, messier, and more glorious picture, producing a veritable orchestra of senses as it mimics a human’s complex ability to process more than one feeling at a time. 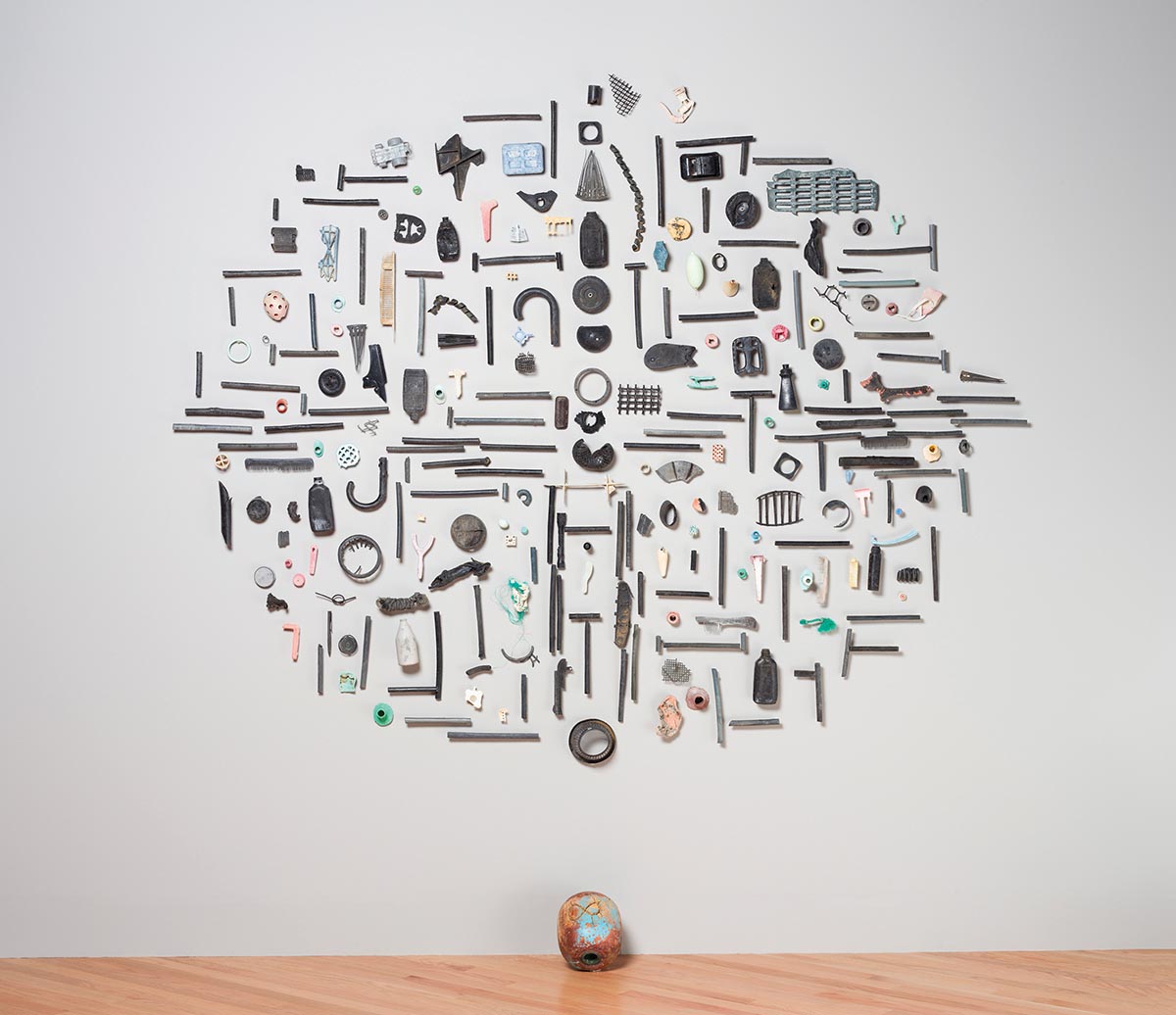 See State of the Art: Discovering American Art Now at the Frist Center for the Visual Arts through September 10. For more information, visit www.fristcenter.org. 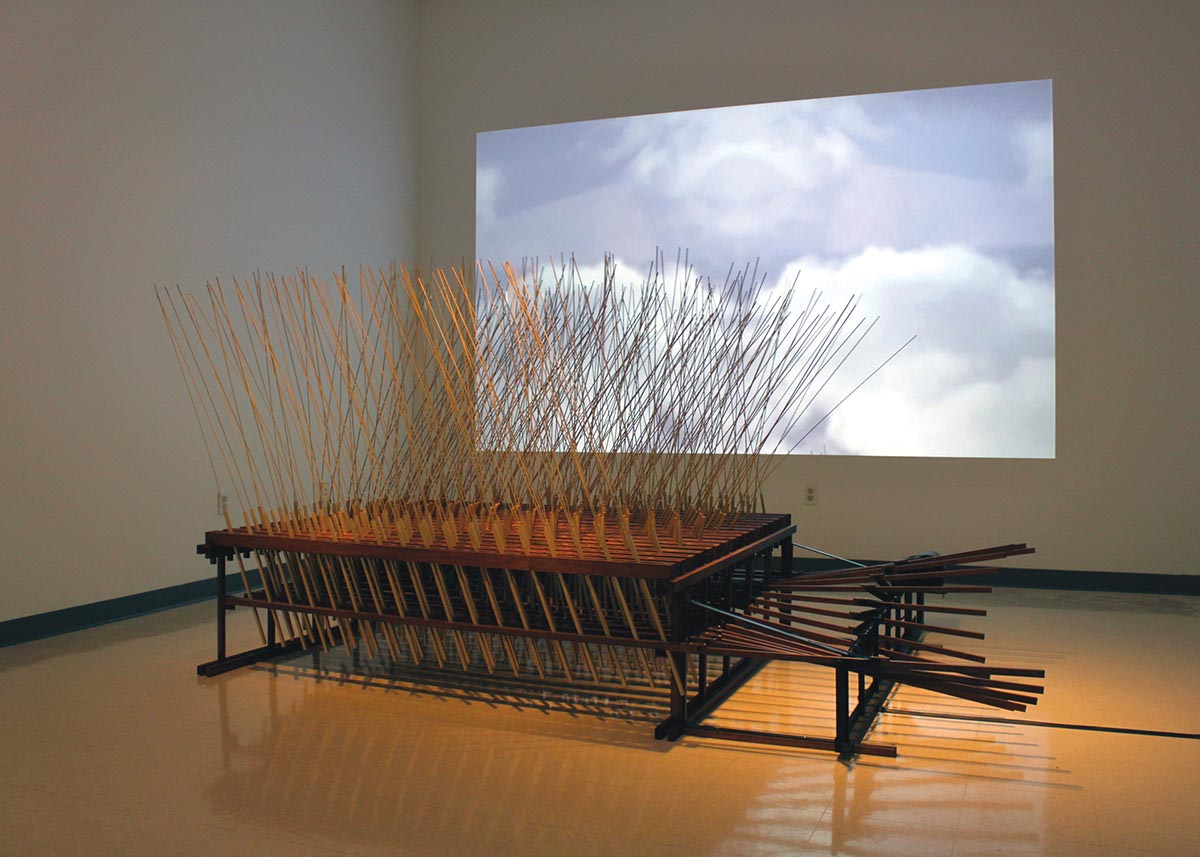