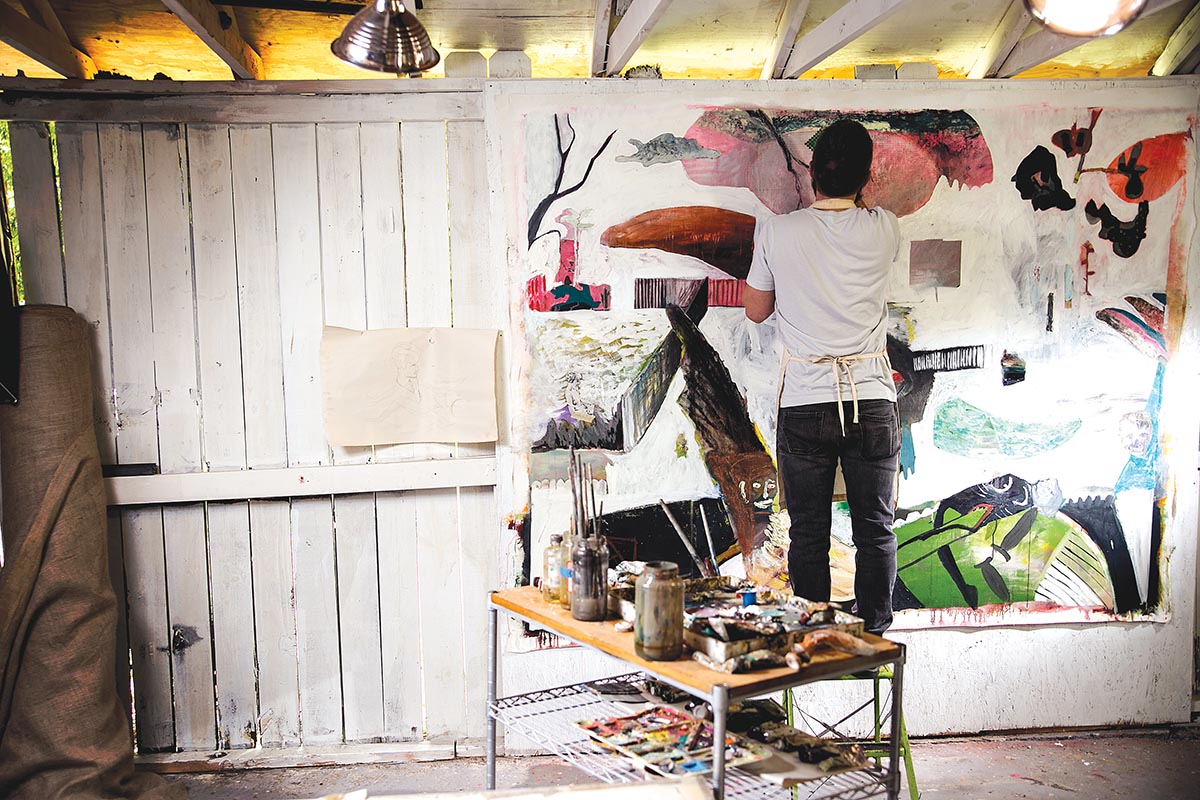 I go out to John Paul Kesling’s studio in Madison for a chat about his exhibition at Galerie Tangerine. It is hot in here. There are many holes in the roomy shed where he paints, but fortunately none in the roof, so the summer downpour stays outside the open door. There are a few wasps in the rafters, and he says medium-size rodents can easily come and go at night. In other words, it’s perfect for him. Especially after his most recent studio—a tiny, windowless room on the seventh floor of a Brooklyn walk-up.

There is a large unstretched canvas stapled to his painting wall, and at a glance it’s clear the spacious image has been through a lot. In the foreground are parts of figures; in the background—or what the mind sees as such—remain indications of distant landscapes. The elements are disjointed but in some kind of discussion with one another. The white paint is (as Timothy Hyman wrote of James Ensor) “independent of any descriptive function.” Instead it works as an editing tool, painting out and carving in space for future revisions.

Looking around the studio, I take in the works on paper, portfolios of drawings, canvases, and wood panels. Scavenged materials, and a genuinely unassuming nature, give Kesling’s work a scrappy, unprecious air. The humility in his work makes it easier to forgive any bewilderment I feel as I search for a handhold. What am I meant to make of these images, these figures and spaces? It is as if I am watching something attempting to come into being, but not ever fully making it. It is both frustrating and satisfying. Unresolved. This is neither necessarily criticism or praise. 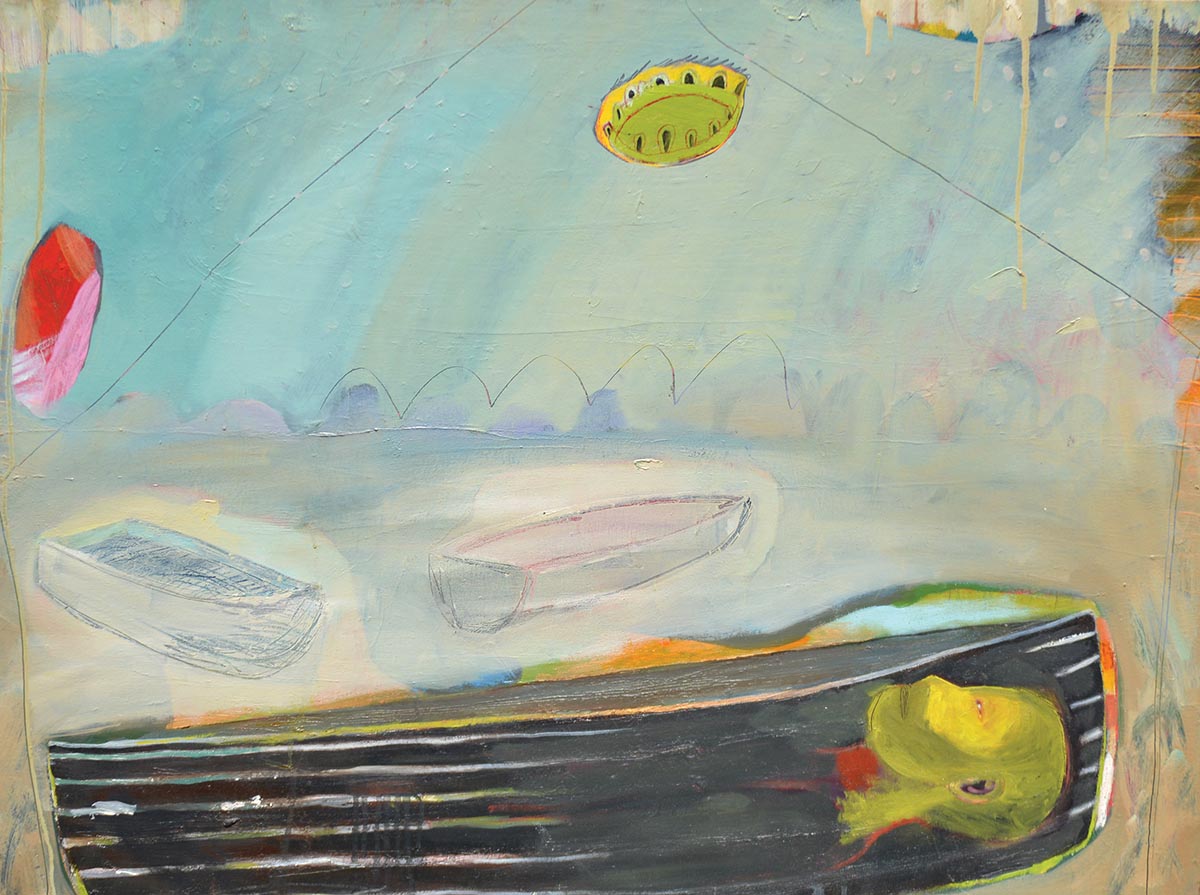 Kesling’s brushwork has some of the brutish, visionary quality of Outsider Art. I think, what does that mean: “visionary”? Am I trying to attach a spiritualism to his work to help navigate paintings that I don’t quickly apprehend? Where is Carl Jung when you need him? Within the medium is the impression of myth, or narrative, but very few cues. Painting is, in itself, a misty undertaking—but some painters embrace the fog more than others.

When pushed, I think of “the visionary” as decisive, with an eye to the divine. Kesling, however, takes on indecision as a virtue. “I’ll come inside after working for hours and my girlfriend will say ‘how’s it going out there?’ and I’ll say … I don’t know.” A large painting may have had many great parts, but as he paints, they might whittle down to one small area that works. The next time he goes in, he might paint that out; hopefully something else happens. Faith is a requirement. Kesling might have, say, four paintings going at once, and he remarks, without a hint of exhaustion, that if one of them ends up working, that’s pretty good. That math means he needs to paint a lot, and he has the look of someone who does—distracted, determined, with the willingness to work on a painting for weeks, then paint over it with minimal hesitation.

“Is there a difference between failure and defeat in the painting studio? Does failure make you want to keep painting, while defeat makes you want to quit forever?” 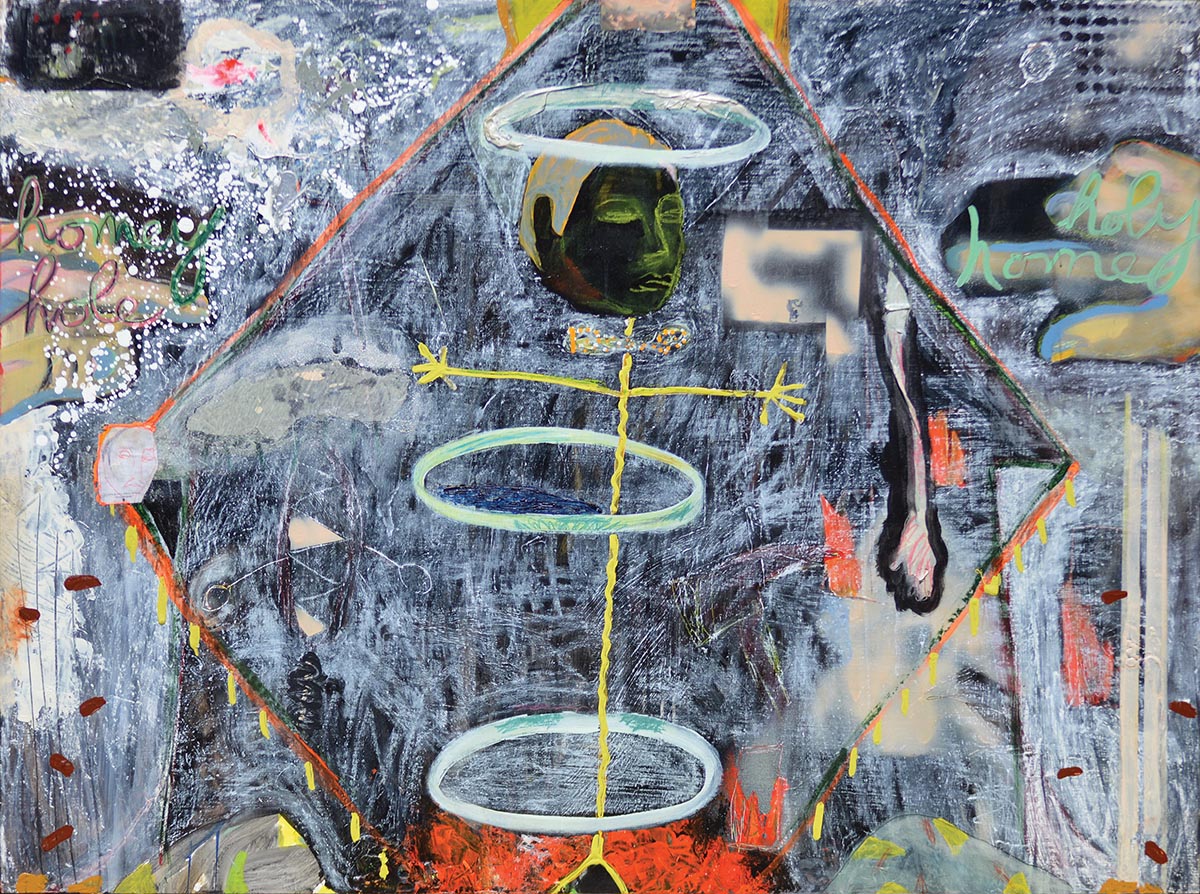 Is there a difference between failure and defeat in the painting studio? Does failure make you want to keep painting, while defeat makes you want to quit forever? Kesling says it’s all about decisions. The images propagate, one to another, and it is dumb luck whether or not an image succeeds. Dealing so directly with uncertainty is anxiety-inducing, a test of any artist’s will, and it is quite possibly this uncertainty, more than technical insecurity, that poses the greatest deterrent to painting at all. 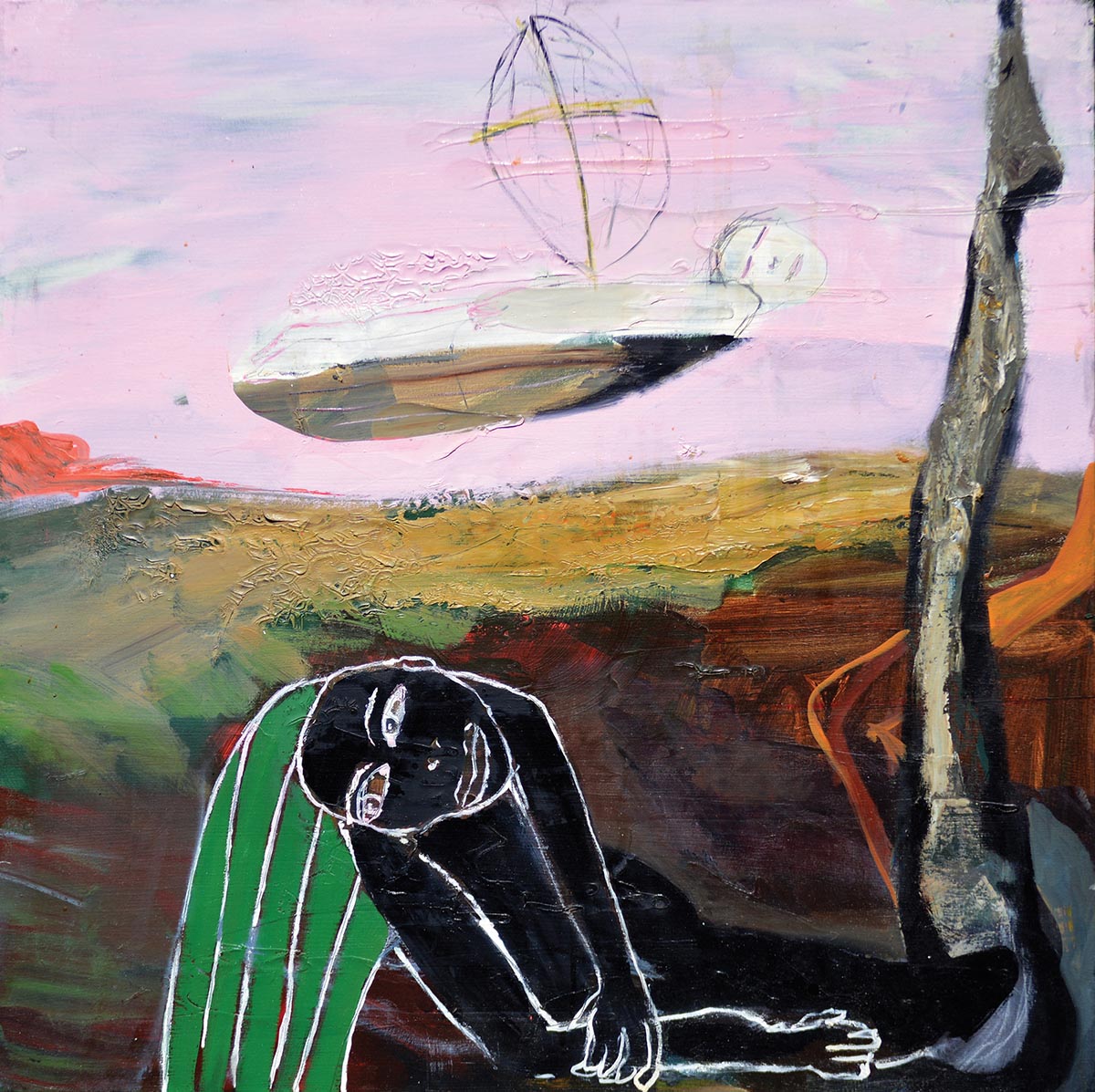 Kesling insists on figures but resists specificity; his references are too cooked to retain their origins. Figures often emerge from the paint, like faces you see in clouds. There is a subsect of figurative painters (Dana Schutz, Nicole Eisenman, Katherine Bradford among many others) whose bloodline runs loosely through to Philip Guston, James Ensor, Max Beckmann, and then further back to Goya, Giotto. Their figures are descended from the viscera and mortality of the Middle Ages, rather than the virtue and vitality of the Renaissance, replete with the Northern European tendency toward the grotesque, the grim, the silly.

Yet these profane aspects of human experience do not preclude beauty and humor. Kesling points at a painting and says, “Someone just referred to that as scary . . . I think it may be the most joyful painting I’ve made.” But I, too, at least at this moment, think it’s frightening.

Writing on the psychodrama in Ken Kiff’s paintings, Tom Lubbock quoted Kiff as saying: “The hill was yellow now. But if it stayed yellow, it might not stay a hill; and if it stayed a hill, it might not stay yellow.” Kiff had written elsewhere that the “unknown” in painting is devastating, if you really take it on. Painters notoriously take this on. I think of Peter Doig “constantly wrestling with his doubts,” of Amy Sillman averring, “You have to have a doubt sandwich. If you have the doubt at the front, you won’t do it, and if you have doubt at the end you’re probably going to kill yourself.” 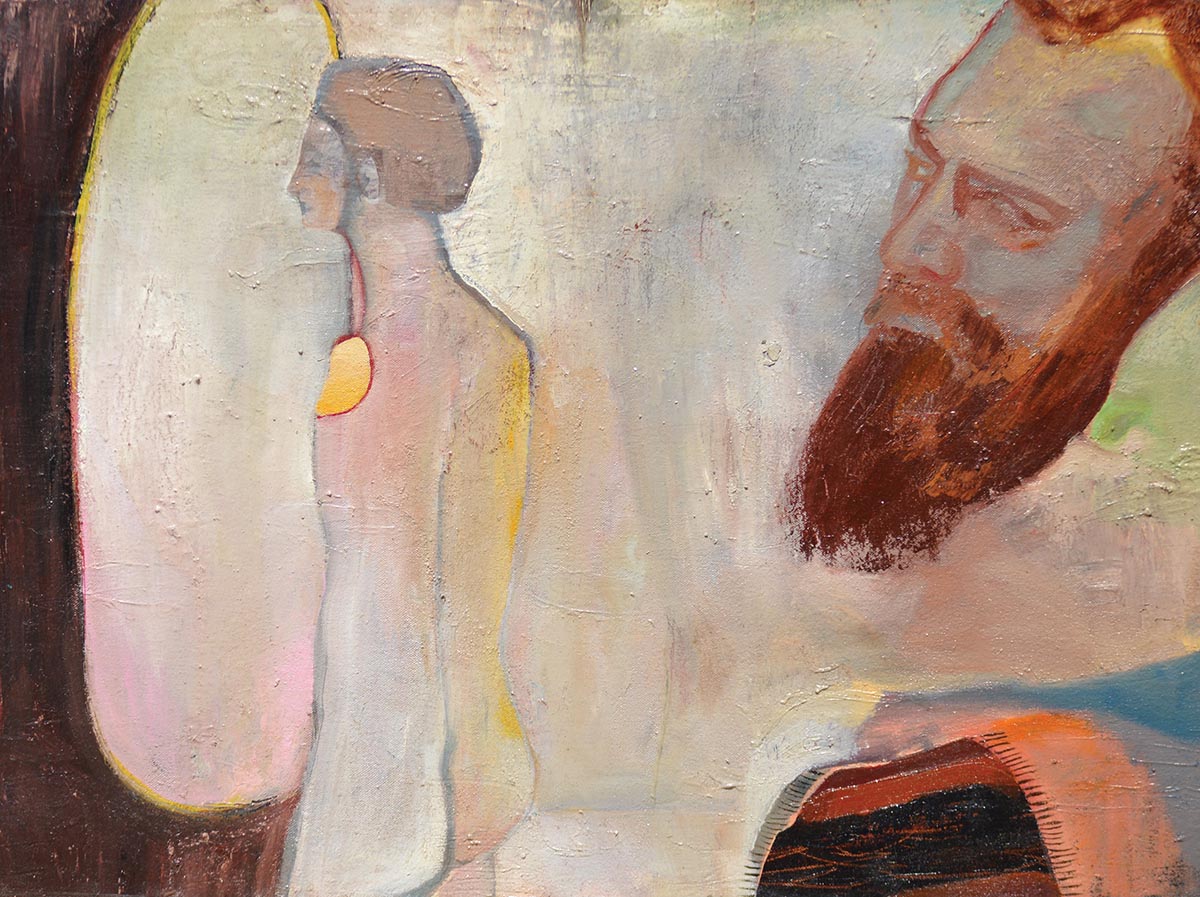 I feel in this a voluntary derangement of reason, estrangement from fixed determinations of success and failure. I say as a painter that we, many of us, mostly bring it on—we take it on—ourselves. But Kesling also keeps it light. He listens to a lot of comedy podcasts, sometimes while he paints. “For me, the rhythm of comedy and improv keeps painting playful and fun. If a joke or reference is there, let it happen. If a callback to another work fits, stick it in there. Paint is fluid and so are ideas and conversations.” Then there are titles, he says. “Titles are tricky. If you make them too silly, you risk sincerity. It’s similar to finding the perfect balance in an entertaining yet thoughtful best-man speech.”

I’m left standing in the shed, wondering if that is why Kesling’s show at Galerie Tangerine is called Broken Mic.

John Paul Kesling’s exhibit Broken Mic opens with a reception on Thursday, August 3, from 6 until 9 p.m. at Galerie Tangerine and remains on view until October 6. For more information, visit www.galerietangerine.com. See more of Kesling’s work at www.johnpaulkesling.com.