Sometimes it can be hard to tell the difference between an esteemed visual artist and an ordinary Peeping Tom. Just ask Dean Shelton. A noted watercolorist, Shelton often finds inspiration for his works while driving around the scenic backroads near his studio in Fairview. When he comes across a property that catches his fancy, he gets out of his car and begins snapping pictures. That’s when things get interesting. 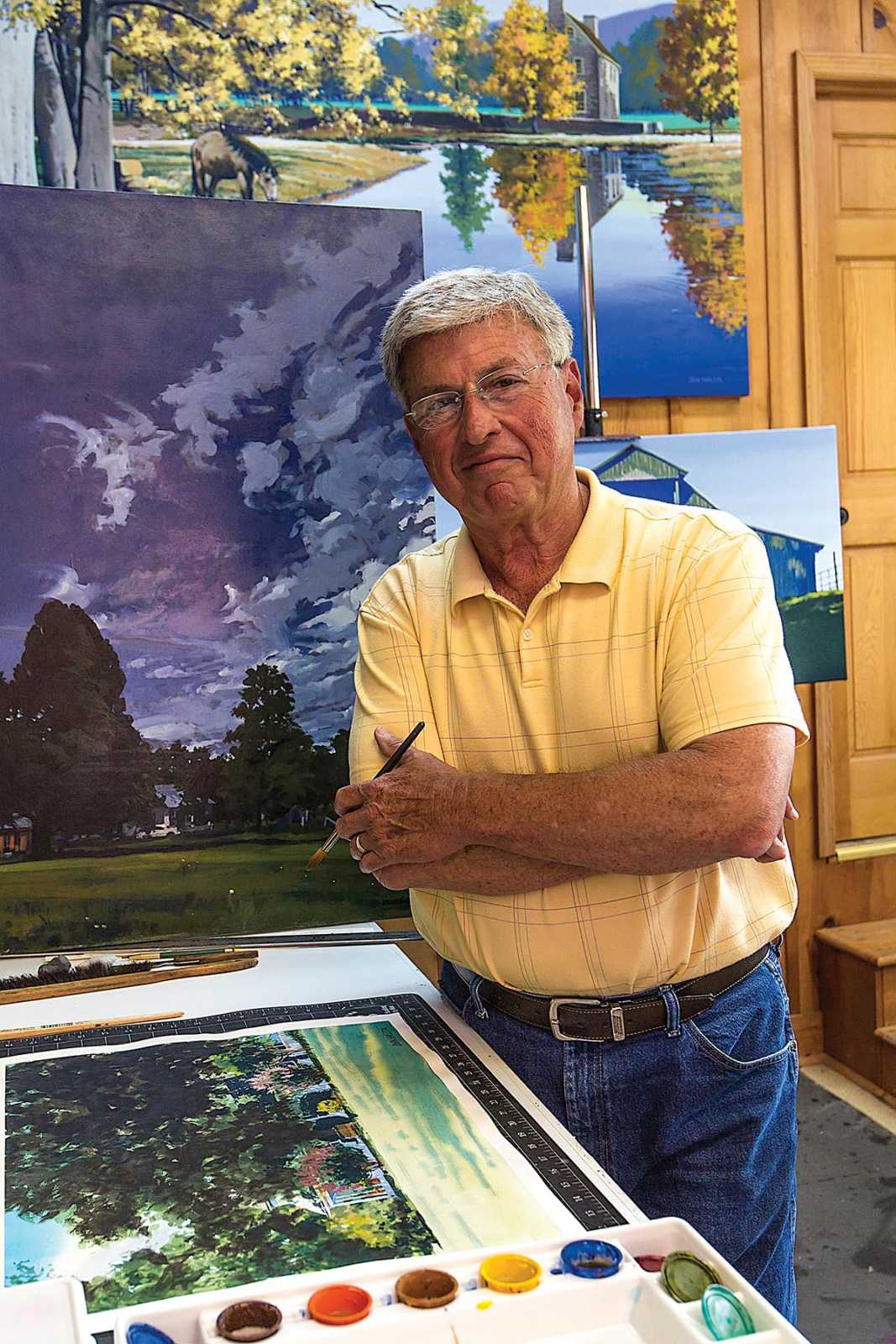 “I’ve had to learn to be careful when taking pictures,” says Shelton in his lyrical Arkansas drawl. “When people start looking out their windows and see a guy taking pictures on their property, they get nervous. Once I tell them what I’m up to, though, they’re fine with it.”

Since his retirement as a freelance commercial illustrator in 2002, Shelton has emerged as one of Tennessee’s most prolific painters and watercolorists. His hundreds of works, often drawn from the digital photos taken during his many excursions, capture the charm and pristine beauty of the Tennessee landscape. Some of his newest pieces are now on display at Richland Fine Art in Nashville.

Shelton has a penchant for painting the sort of fleeting scenes that most of us take for granted as we drive through the rural South. His watercolors depict, among other things, old-fashioned country gas stations, rustic farmhouses, and worn-out antique cars and tractors. These images are appealing because of their familiarity. They are powerful because of their exquisite use of color and exacting attention to detail.

One can almost feel the crisp fall air in Gulf Station, an old country gas station—complete with green John Deere farm tractor—surrounded by a blaze of fall foliage. Similarly, it’s tempting to shiver when viewing Out in the Cold, which shows a 1940s-era sedan encased in icicles and frost.

“As an illustrator, I was expected to include a lot of detail in my work,” Shelton tells Nashville Arts Magazine. “As a painter, I’ve had to learn how to simplify my work, figuring out what I could do without. That didn’t come naturally at first.” 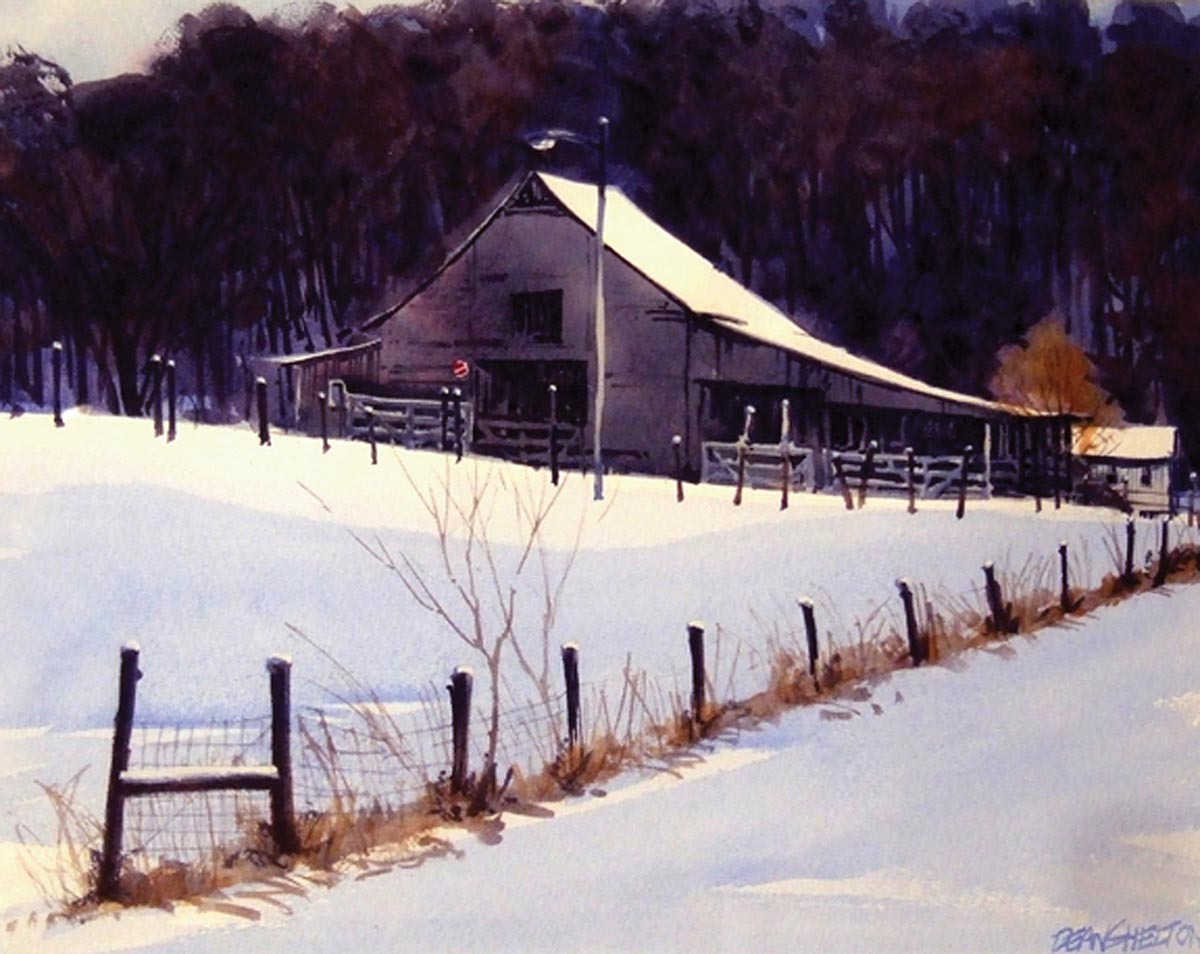 Shelton’s eye for detail and keen sense of awareness came in handy long before he picked up a paintbrush. In fact, it kept him alive during the Vietnam War, when he was stationed on board the aircraft carrier Ticonderoga.

“I was an aviation boatswain’s mate, which meant I worked on the flight deck with the arresting gear,” says Shelton. “With all those jets taking off and landing, you had to keep your eyes open and be careful.”

After his three-year stint in the Navy, Shelton took advantage of the G.I. Bill to attend college. He knew he wanted to be an artist, but he had no interest in abstraction. “I wanted to do something that would allow me to make a living,” he says. A catalogue for Arkansas Polytechnic College caught his eye. Soon he was majoring in the school’s commercial art program.

Shelton met his future wife at Arkansas Tech. He also came under the influence of Stephen Naegle, a professor and noted watercolorist from Utah who had a knack for painting nostalgic, rustic scenes. Naegle’s masterful techniques for contrasting light and shadow, along with his preference for painting old buildings and rural landscapes, would one day inform many of Shelton’s works.

“As a painter, I’ve had to learn how to simplify my work, figuring out what I could do without. That didn’t come naturally at first.” 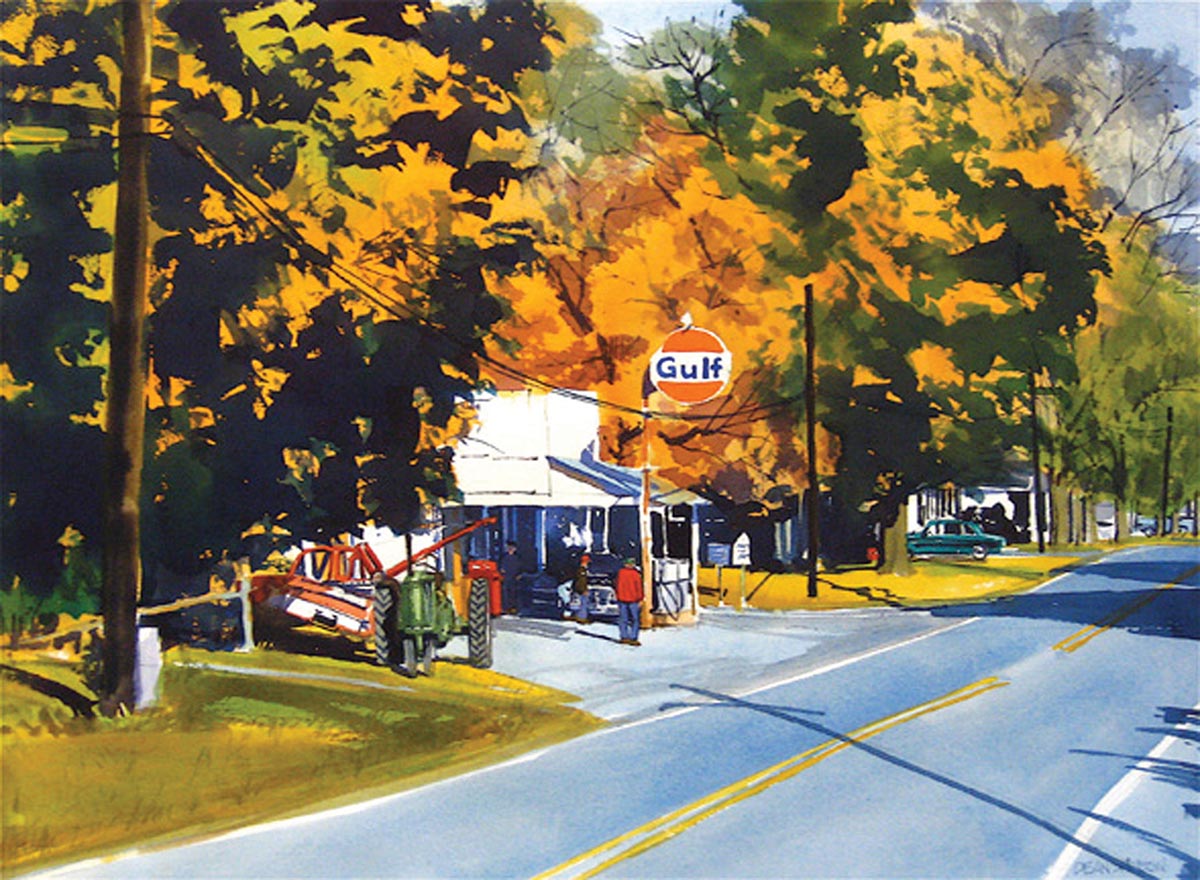 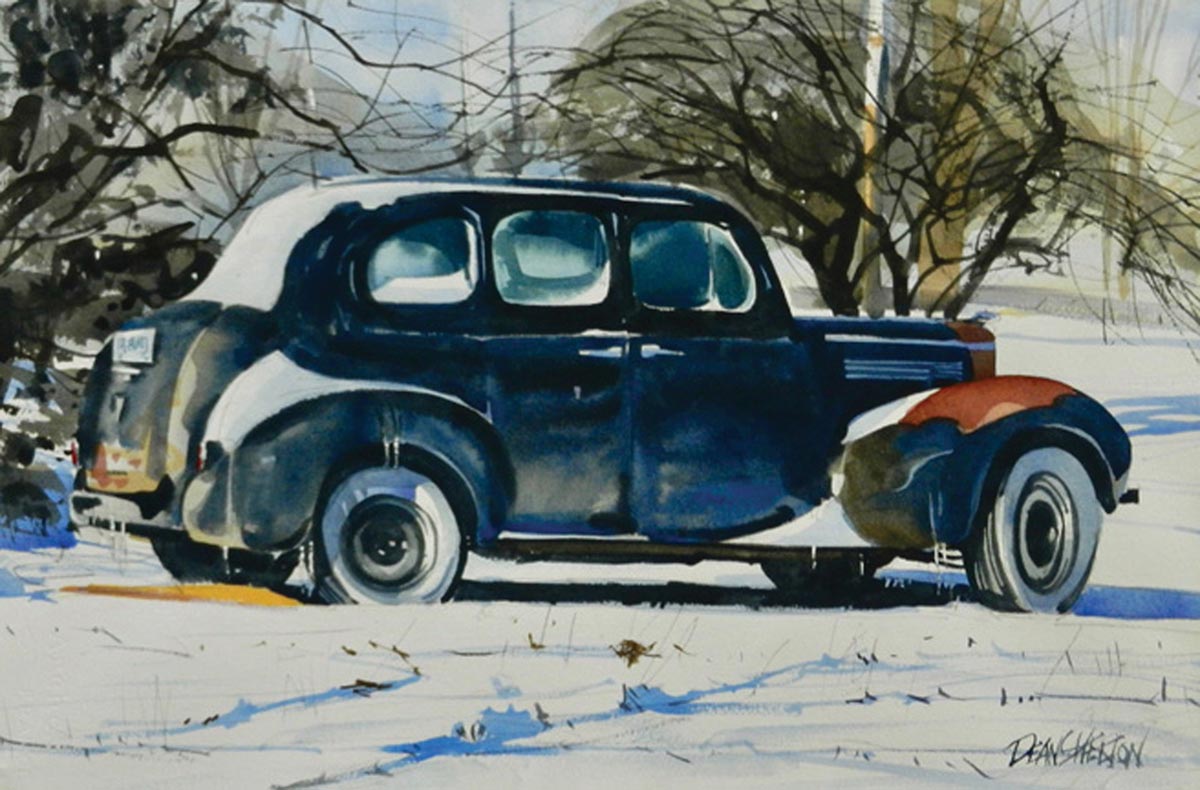 Fresh out of college, the young artist still had some of his G.I. Bill left, so he traveled to Los Angeles and enrolled briefly in the Art Center College of Design. He soon moved to Nashville, where he found employment as a magazine designer at the Baptist Sunday School Board, the precursor to LifeWay. Shelton became a freelance illustrator in 1974, an occupation he maintained for nearly thirty years.

Shelton’s work as an illustrator almost always involved drawing people. In his watercolors, people are seldom seen. Instead, Shelton creates subjects like Hargrove Holler Barn, a study in the various ways light reflects off the snow. In Sitting Duck, Shelton plays with light as it sparkles on rippling water.

Even when he does include people in his watercolors, light is once again the focus. In Quitting Time, we see two men standing outside a whitewashed building with a torn tin roof. The man standing next to the truck is fully illuminated, while the man closing the building door is shaded from direct sunlight by a nearby tree. 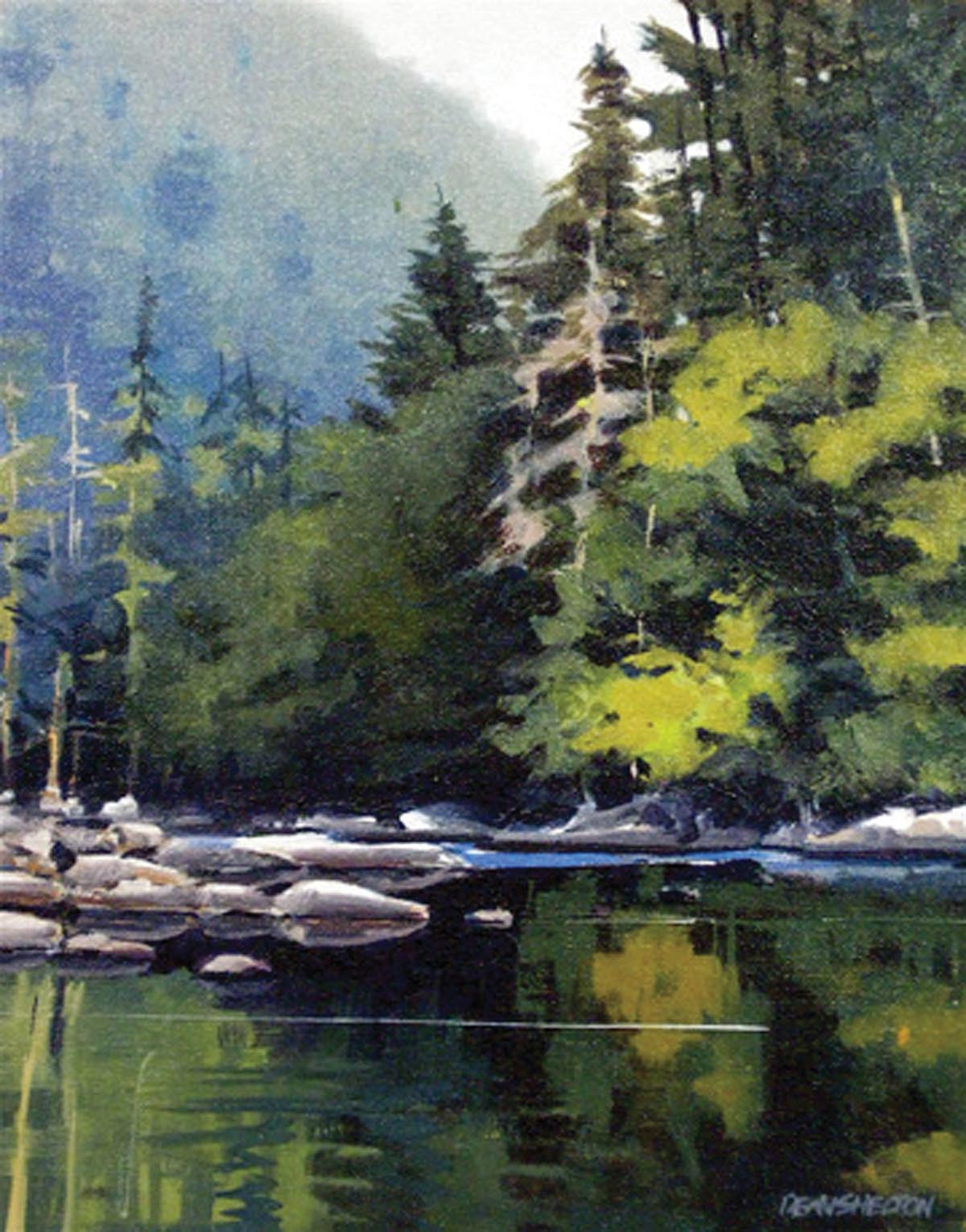 “Those men were finishing up their day and loading up the truck, and I just thought the scene would make a great painting,” says Shelton. “That’s how I find a lot of my subjects for painting. You just know a good idea when you see it.”

Dean Shelton is represented by Richland Fine Art. See more of his work at www.richlandfineart.com and www.deanshelton.com.