“Joe Montgomery paints without regard for the market or an ever-present audience, preoccupations that so often characterize the work of artists today.” 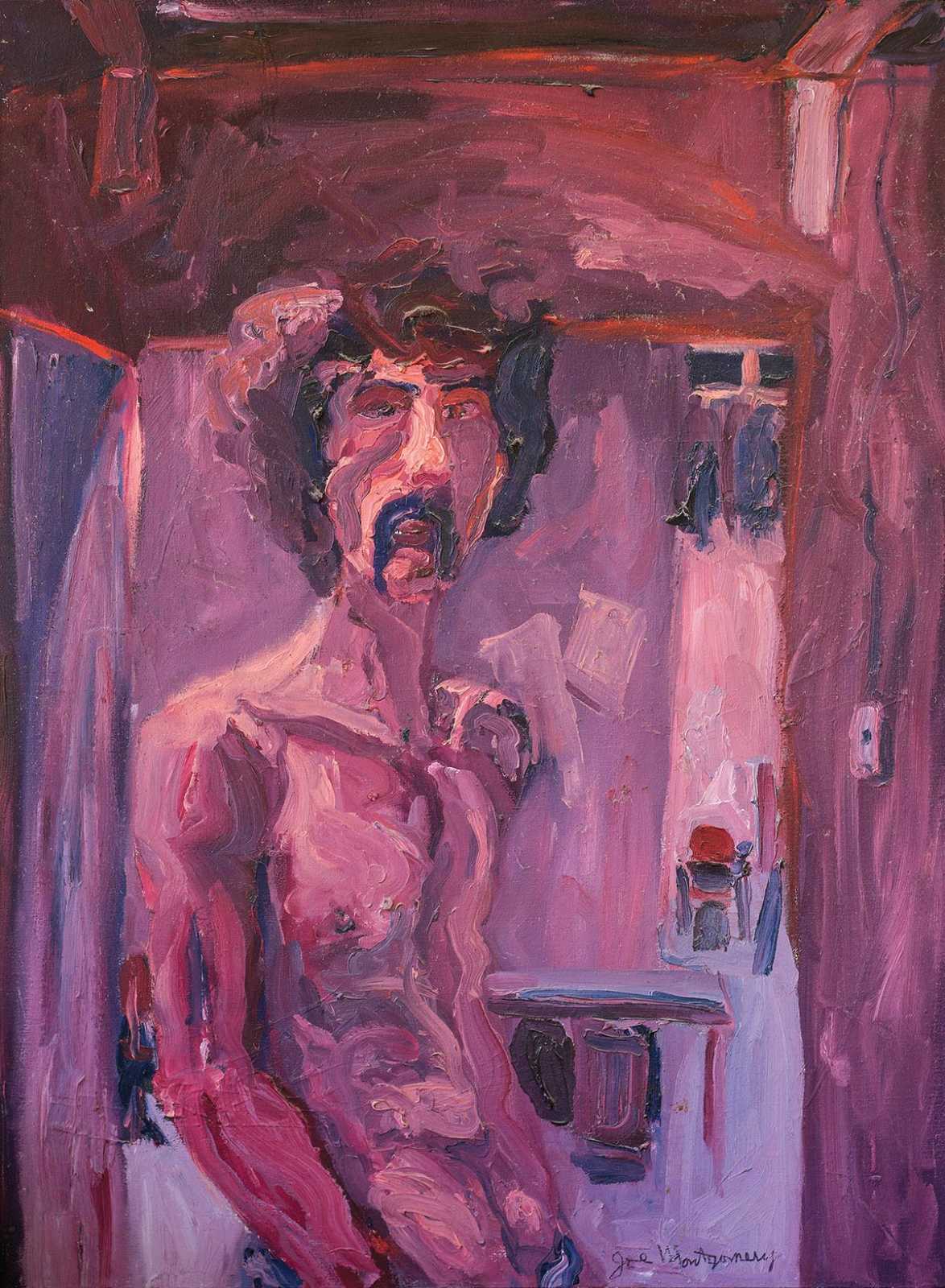 It’s easy these days to forget that art-making should be a spiritual practice. The real reward is in the making itself, not sales, not notoriety. Artists who are devoted to their craft experience a state of consciousness that is beyond ego; the result is a pure, selfless gift. I have noticed that it is hard not to be distracted from the original intent of one’s craft in 2017, when expected to tell the world about oneself on a daily basis. This sort of self-promotion used to seem shameful. In my practice, I have to switch back and forth from artist to gallerist, not a happy conjunction, but I have a great partner in Elizabeth Cave, who handles the real business of the gallery.

I am very fortunate to have had some wonderful mentors who would never have stooped so low as to tweet about themselves. I also have colleagues and friends whom I admire as role models and spirit guides. One of these is Joe Montgomery.

Joe is a wonderful painter who has been quietly working for the last forty years and whose work is magnificent—honest and without pretension. Joe’s early career was interrupted by the Vietnam War. He was in the Air Force from 1970 to 1973 and already interested in Buddhism when he was sent to Thailand. “When I was in Thailand with the Air Force, I got inspired by Buddhism and Asian art. There was the Golden Buddha, the Reclining Buddha with mother-of-pearl inlay on the feet, and all the wood carving and stone carving. It gave me a feeling of peace and serenity.” 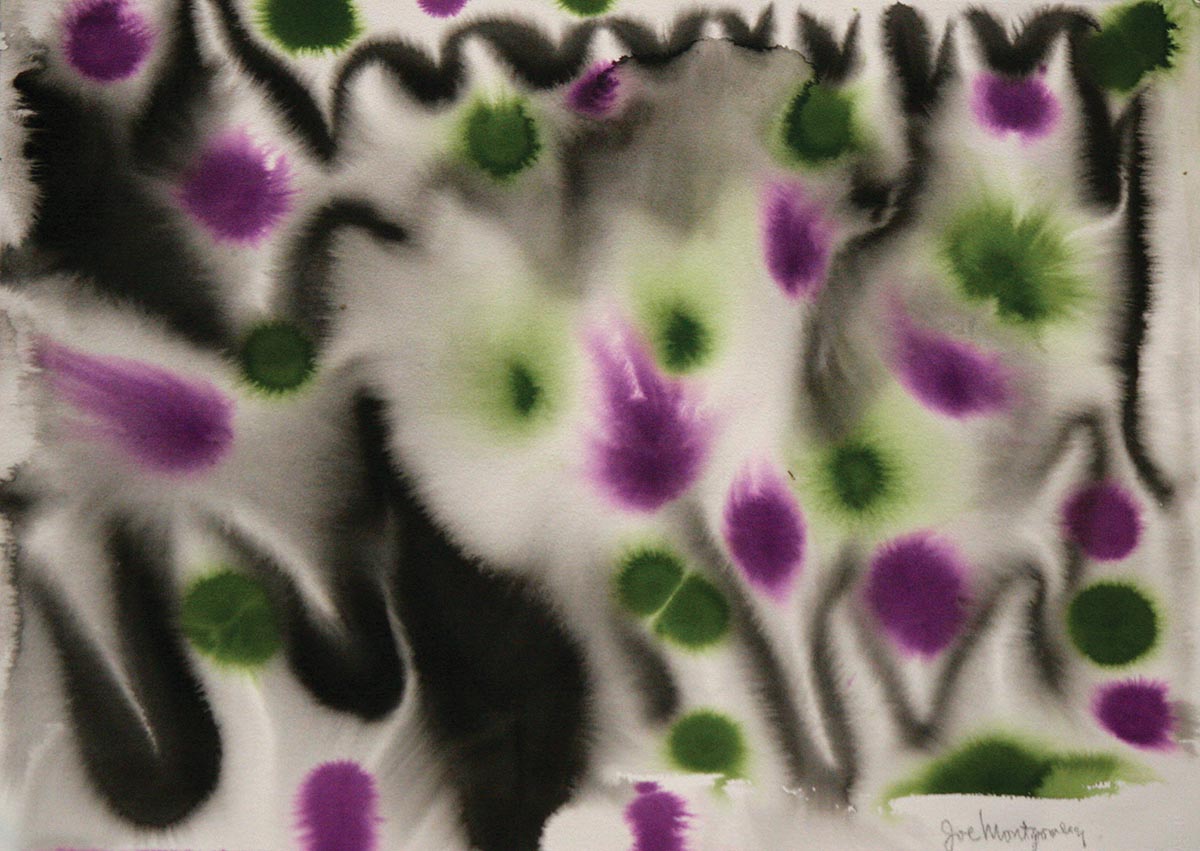 After he got out of the Air Force, Joe went to MTSU where he studied painting under David LeDoux. David and Joe both appreciated Zen Buddhism, and David encouraged Joe’s emotional approach to color. Joe followed a more or less traditional academic painting program, learning figurative techniques including anatomy, proportion, and drawing from life. One of his paintings from this period, a self-portrait, hangs over his couch at home. It is mostly violet and reminds me of LeDoux’s violet paintings. Joe explains that it was inspired by Rembrandt’s Side of Beef, a painting that has been a catalyst for many subsequent artists, including Chaim Soutine, Pablo Picasso, and Francis Bacon. Joe has studied the works of the Old Masters but also finds inspiration in the works of artists such as Soutine, Franz Kline, and Jackson Pollock. “I come from a tradition of abstract expressionism, but I am doing something that is my own. ‘Everyone else is taken, so you have to be yourself.’ That’s what Oscar Wilde said.”

“Everyone else is taken, so you have to be yourself.” 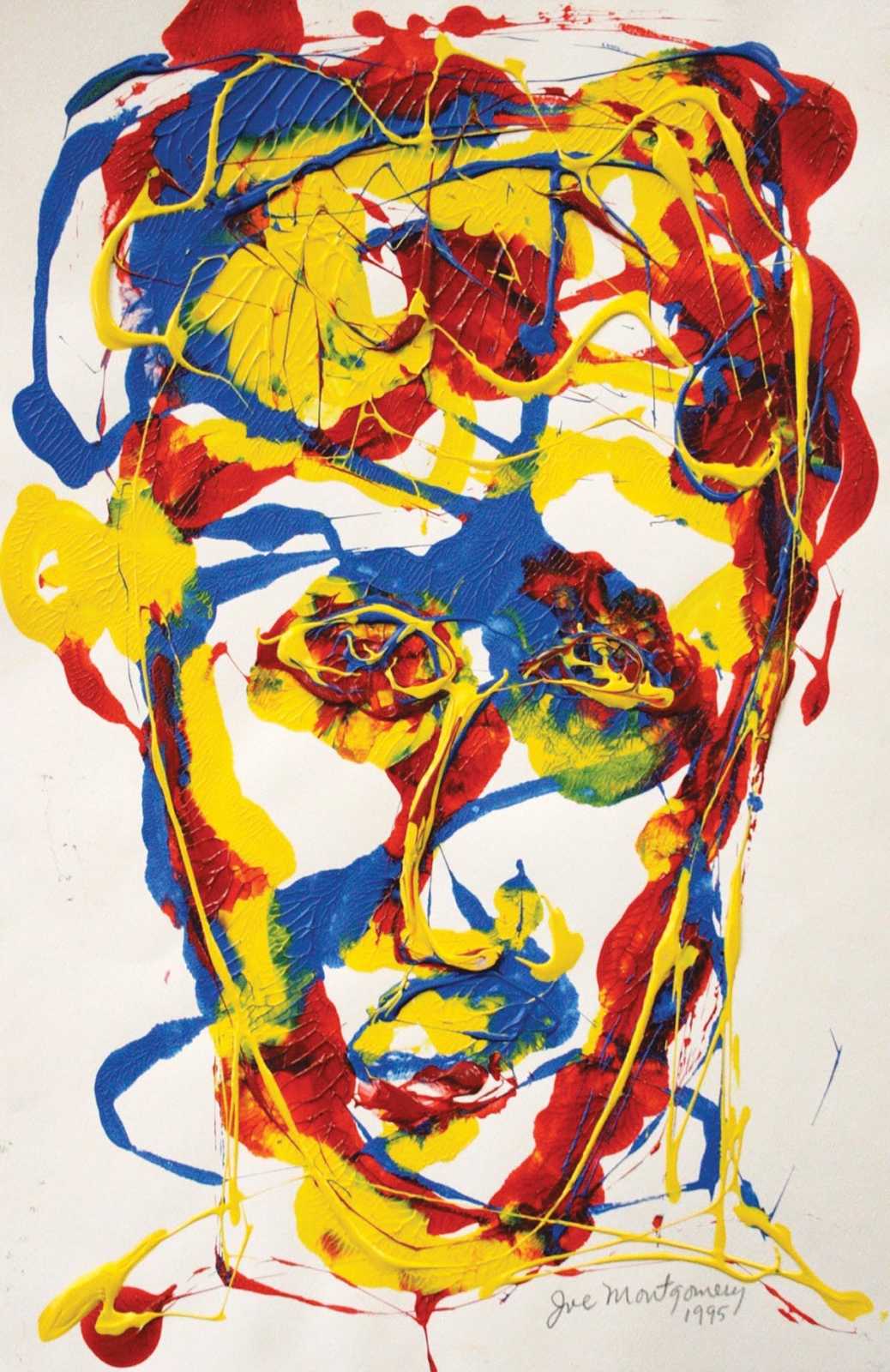 With the help of a Ford Foundation fellowship, Joe earned his Master of Fine Arts degree in 1978, working under the instruction of Elaine de Kooning, Jim Herbert, and Mike Nicholson at the University of Georgia. Surrounded by such great teachers, Joe flourished as a figurative expressionist painter. A strong influence during this period was Matisse, whose comments about the bent light of the goldfish bowl inspired Joe to create a series of goldfish paintings. Joe laughs, “When Elaine saw my goldfish paintings, she said, ‘This is your direction!’”

Since then Joe has been “following [his] bliss,” as he puts it, quoting Joseph Campbell. His work has become almost purely abstract, although he still makes the occasional representational painting. Pattern and color are his primary concerns. His works suggest the infinite variety of pattern and color in nature. He has perfected and simplified his technique over the years, so that now it is almost effortless. He has chosen watercolor as his medium mainly because it is so direct, like drawing. “Oil takes so long to dry, and it is hard on your health,” he points out. Joe likes to work wet-on-wet because of what happens when the pigment hits the wet surface. Most artists are frustrated by this technique, because the paint is so hard to control, but Joe has an amazing dexterity and an intuitive ease in handling paint. “My favorite thing about painting is being able to create something from nothing. Each day kinda repeats itself, but I try to invent something new.”

Joe is a night owl; he sleeps most of the day and works at night. This nocturnal pattern was famously followed by Picasso—and Elvis, of course. Joe likes to listen to soft, meditative music while he works, and he loves to ponder philosophical quotations. “I don’t paint every day, only about four days a week. You need that time off to let the ideas grow. A field at rest will yield a bountiful crop.” He lives simply with his animals, including four cats, the birds that come to his feeders, and the occasional raccoon. “Animals are another extension of God’s kingdom and just as important as we are.” 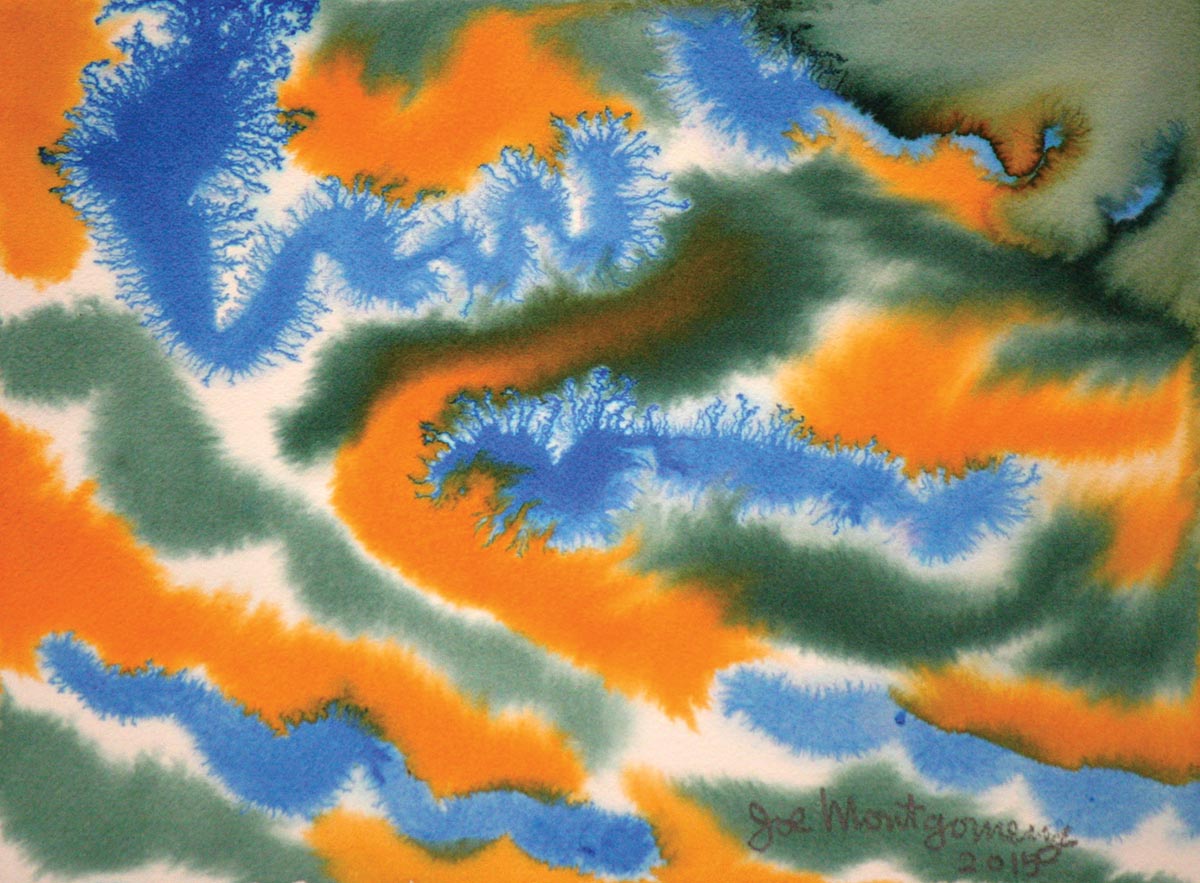 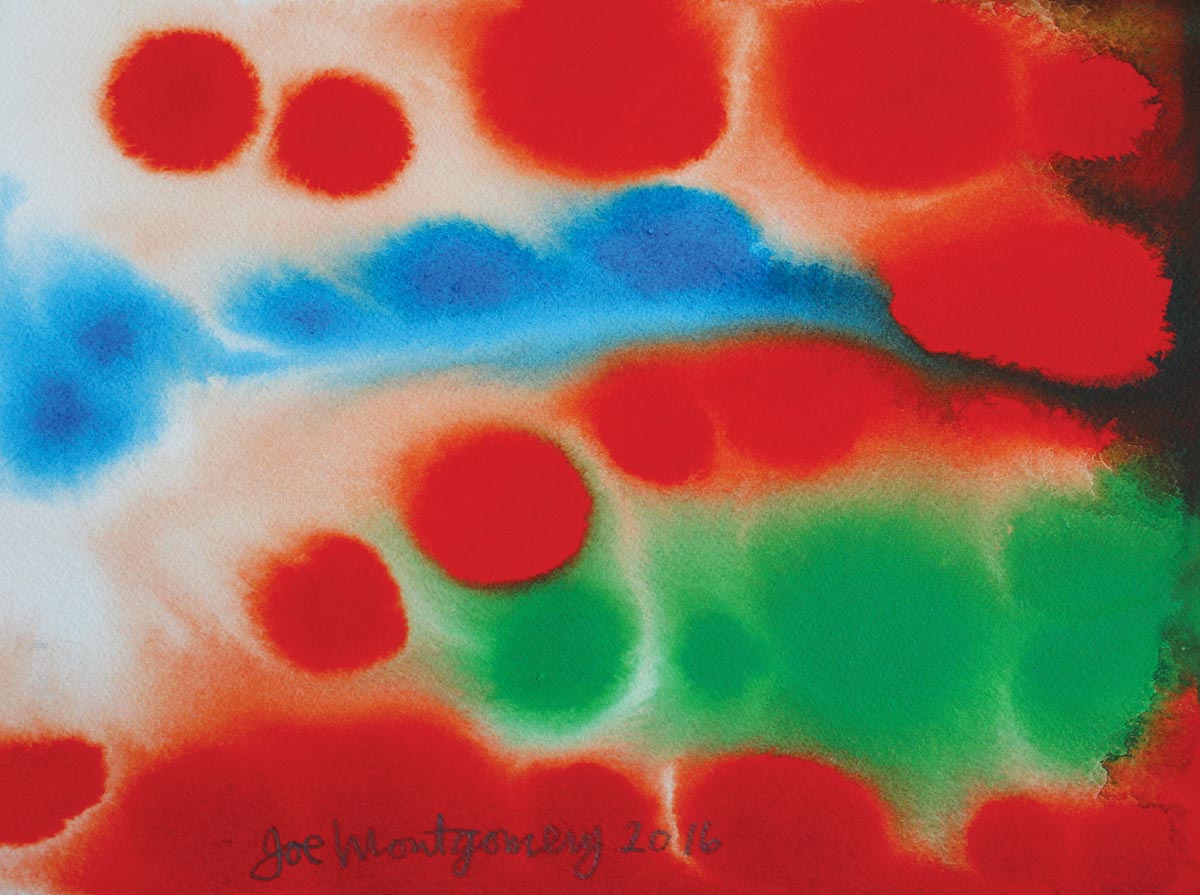 We are delighted to show a tiny fraction of Joe’s immense body of work at LeQuire Gallery. Joe Montgomery paints without regard for the market or an ever-present audience, preoccupations that so often characterize the work of artists today. Joe’s humor, his humility, and his kindness, along with his dedication to his craft, are all part of a thoughtful spiritual quest. We could all take a lesson from him. 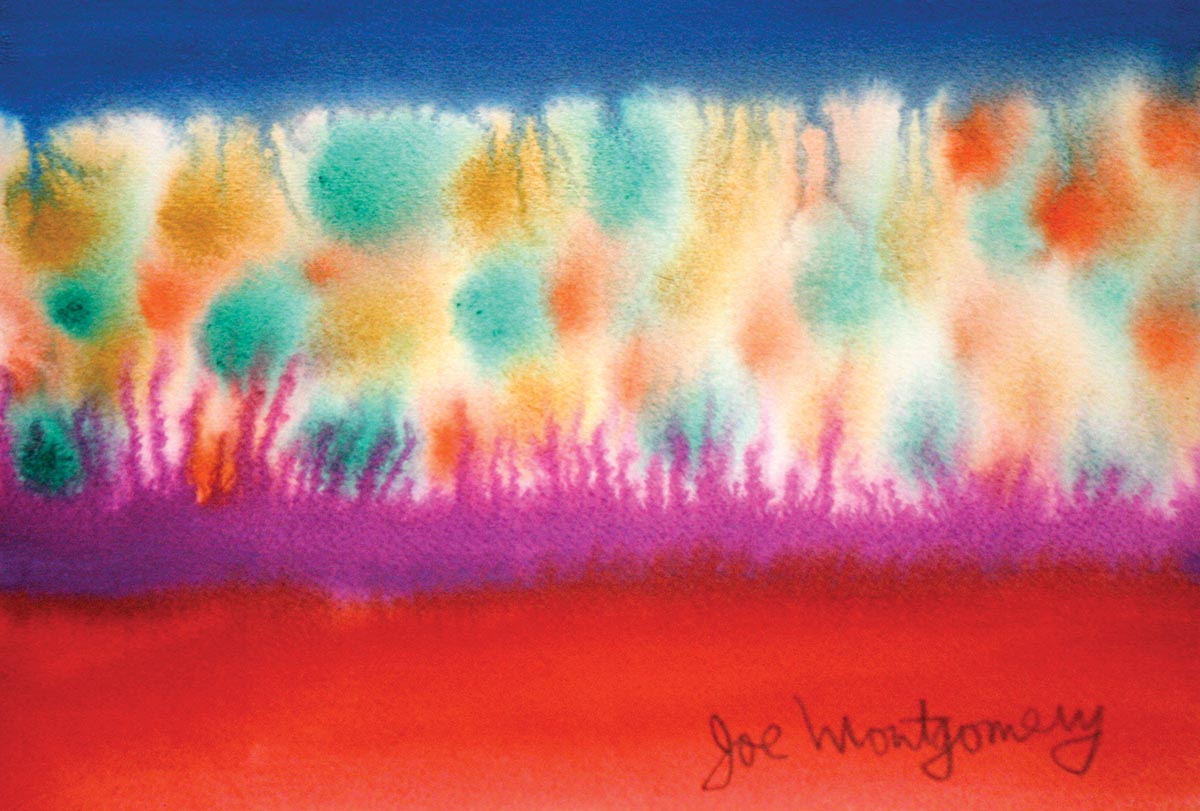 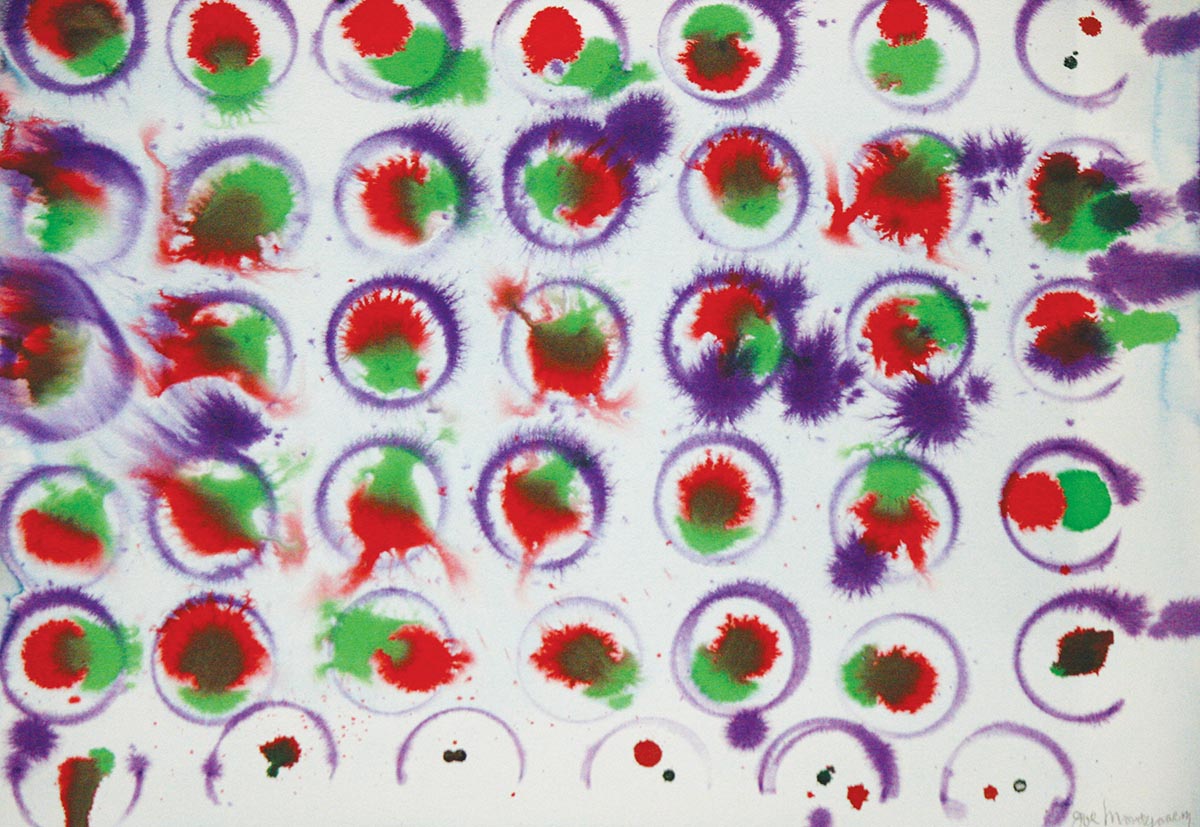 FUNKY GOOD: The Paintings of Joe Montgomery is on view at LeQuire Gallery August 12 through September 30. A reception for the artist is slated for Saturday, August 26, from 6 until 8 p.m. For more information, visit www.lequiregallery.com. 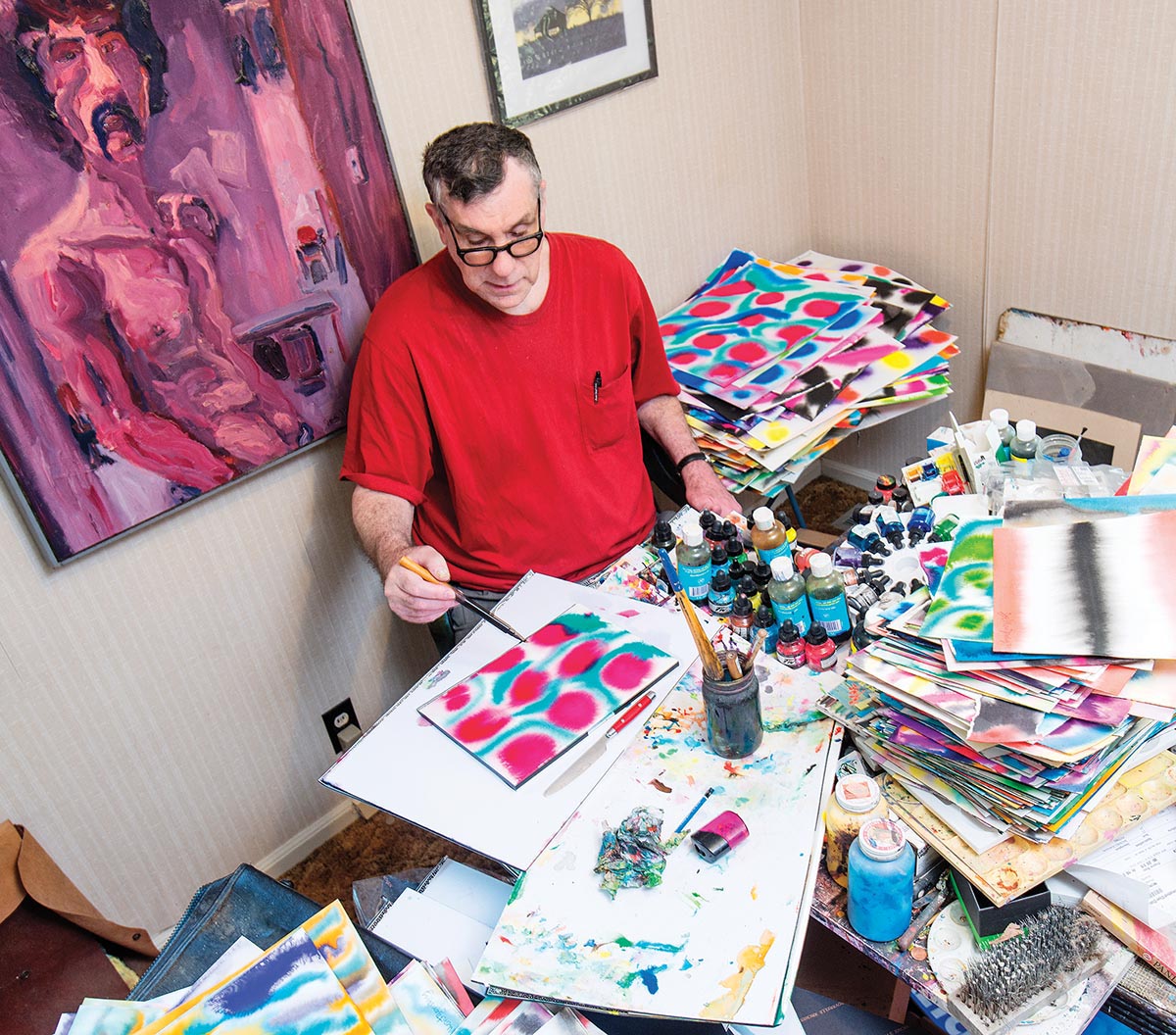