On March 17, 2017, Dana Schutz’s painting Open Casket (2016) was unveiled at the Whitney Biennial and was, simultaneously, the impetus for heated international discourse concerning the validity of visual censorship and historic authorship over subjective content—it garnered protests and incited urgent reflection on the socio-political role of contemporary art, and artists, in the current political climate. Can a white artist make artwork about the black experience? How does a white artist pragmatically interpret the past, or narratives, not their own? How does an artist speak truth without yelling? 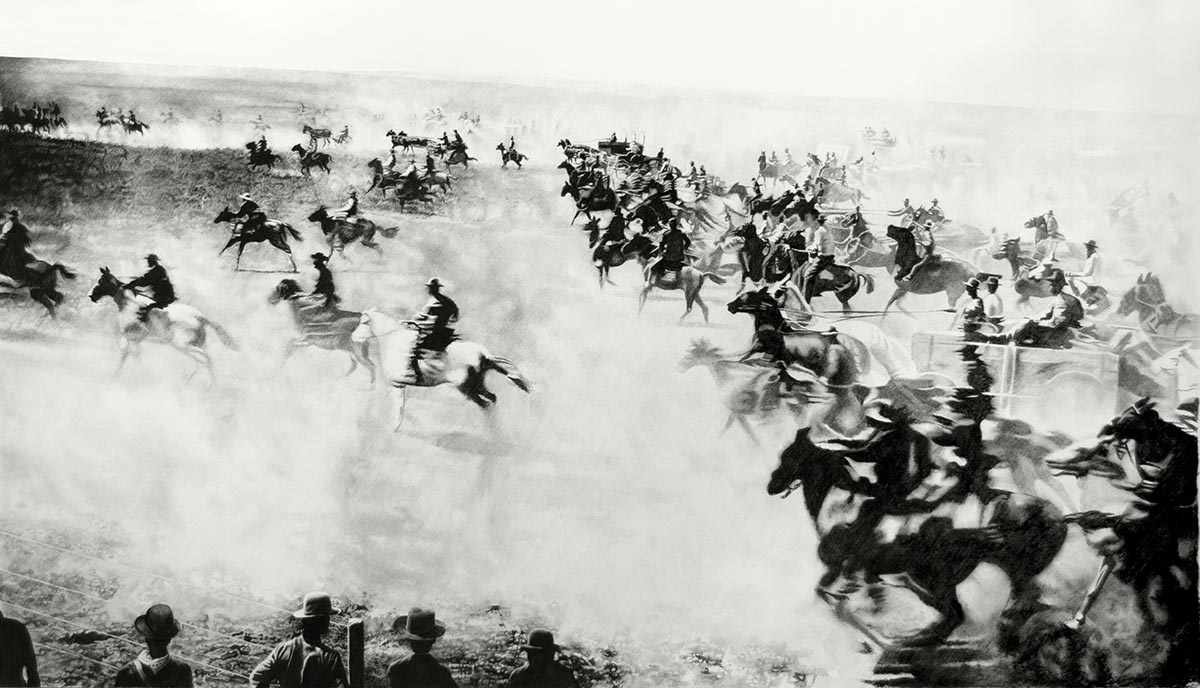 This month, Tinney Contemporary premieres Joel Daniel Phillips: Welcome to the Orange West, a prescient exhibition of hyperrealistic charcoal and graphite drawings which quietly sunder relics of collective nostalgia. Phillips, an artist best known for his evocative large-format portraits of people at society’s fringe, found himself necessarily responsive to those queries warranted by Schutz’s painting earlier this year. Welcome to the Orange West is a continuation of Phillips’s investigations into the documentation of elusive narratives—yet marks a conscious re-examination of artistic culpability, historic ownership, and the hollowness of Western romanticization. 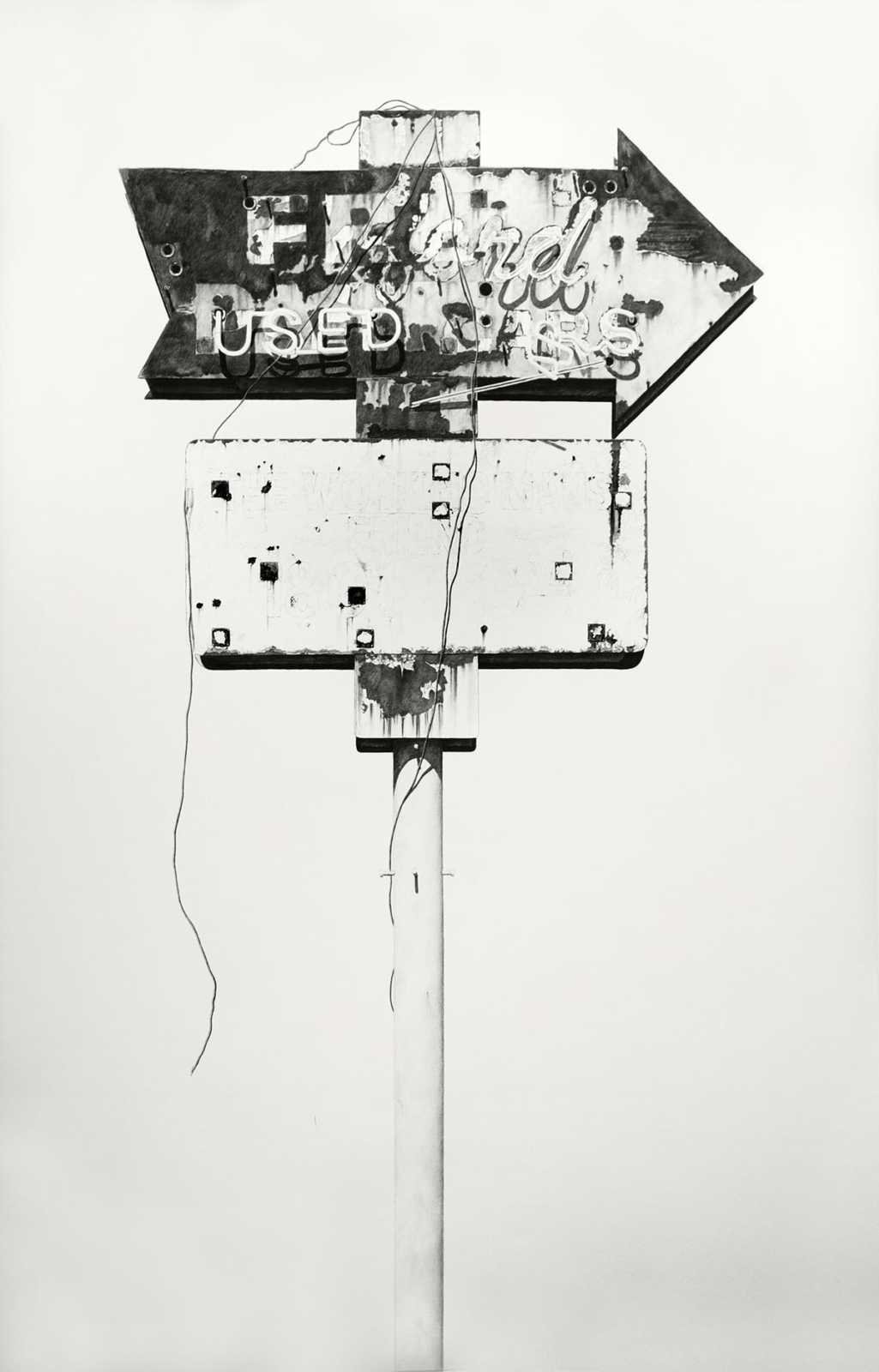 In these new works, Phillips forgoes portraiture entirely, pairing early reference materials from the early 1900s with drawings of abandoned signage from along Route 66. Currently located in Tulsa as a Tulsa Artist Fellow, Phillips has been culling public archives and roadside relics from Oklahoma’s formational period as a method for parsing major events from the state’s history: the early oil boom, the purposeful extermination of American bison, and the land run.

“I’m really interested in nostalgia and how this nostalgia—our whitewashed or rose-tinted view of the past— affects the way we think about our future,” says Phillips. “We’re living in a very fascinating period right now where we have just elected a president based on the idea of returning to a notion of the past. In the midst of that conversation I think there is a lot of room to re-examine, for the first time, what that past is.”

In Working Man’s Friend (2017), a crinkling arrow with limp fluorescent tubing denotes “used cars,” a phrase which partially obscures its earlier identity for “FREE PARKING” that has resurfaced after years of weathered erasure. Mounted below, a faded square sign near imperceptibly declares “the working man’s friend” on its torn surface. New York Cafe Hookah Lounge (2017) proceeds similarly; isolated amid white expanse, the roadside totem has been excavated and stripped by the sun. Only the full-scale cast horse chained to its base posits temporal resistance: With its front hooves splayed majestically immobile, the plastic beast infinitely whinnies into the sky.

“I find these signs to be this amazing metaphor for our collective cultural history—particularly this part of the country. They’ve had multiple owners and multiple identities built into them; histories which are on the surface and underneath,” says Phillips. “The signs are these apocalyptic posts from a past which is our truthful past. They aren’t the shiny version of what was initially created; they are the actual rust and decaying result. I find them really compelling.” 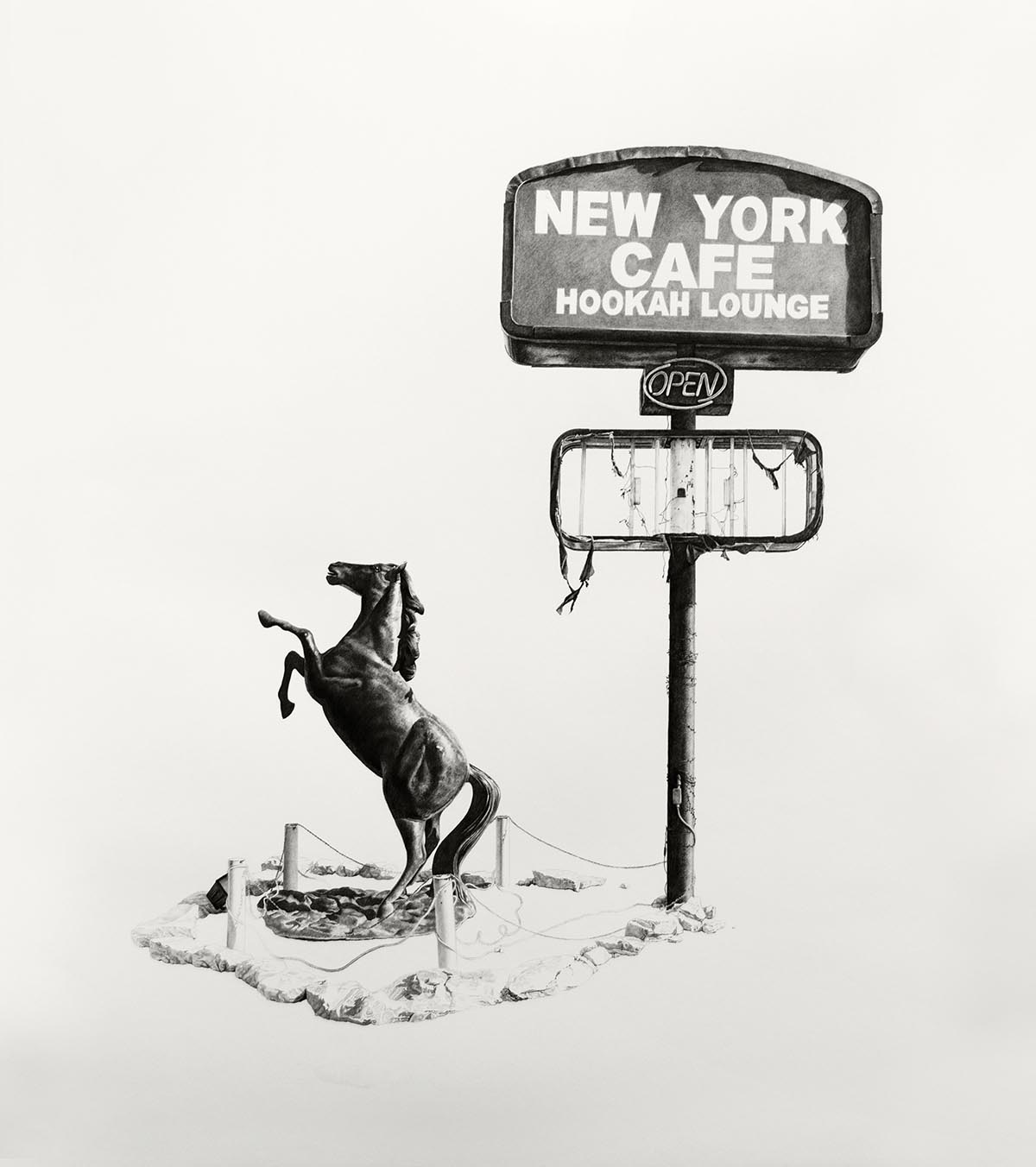 Stylistically similar to Richard Avedon’s seminal portraits of Western type casts In the American West (1979), Phillips has employed a starkly blank background and referentially high-noon lighting situation which effectively thrusts his subjects forward. Like “islands,” an advertising term for images that appear in the middle of page spreads, these meticulously rendered roadside monuments hover with near-photographic realism at the center of the composition.

As in Phillips’s Sirloin Steakhouse (2017), the use of a high contrast, seamless background works well to psychologically displace his subject from temporal constraints and inferrable meaning by omitting its original context. Texture, detail, surface quality, and expression are illuminated. For Avedon, this sort of surface- centered depiction of people ultimately reduces the human form to a condition of surface; his is a glamorized conception of the American West whose subjects fulfill, or emulate, stereotypical roles of Western settlement and fantasy. Phillips has negotiated a documentation of westernization whose evocation and subjective stance are emotively similar to Avedon’s but which he has parsed conscious of his personal nostalgia. 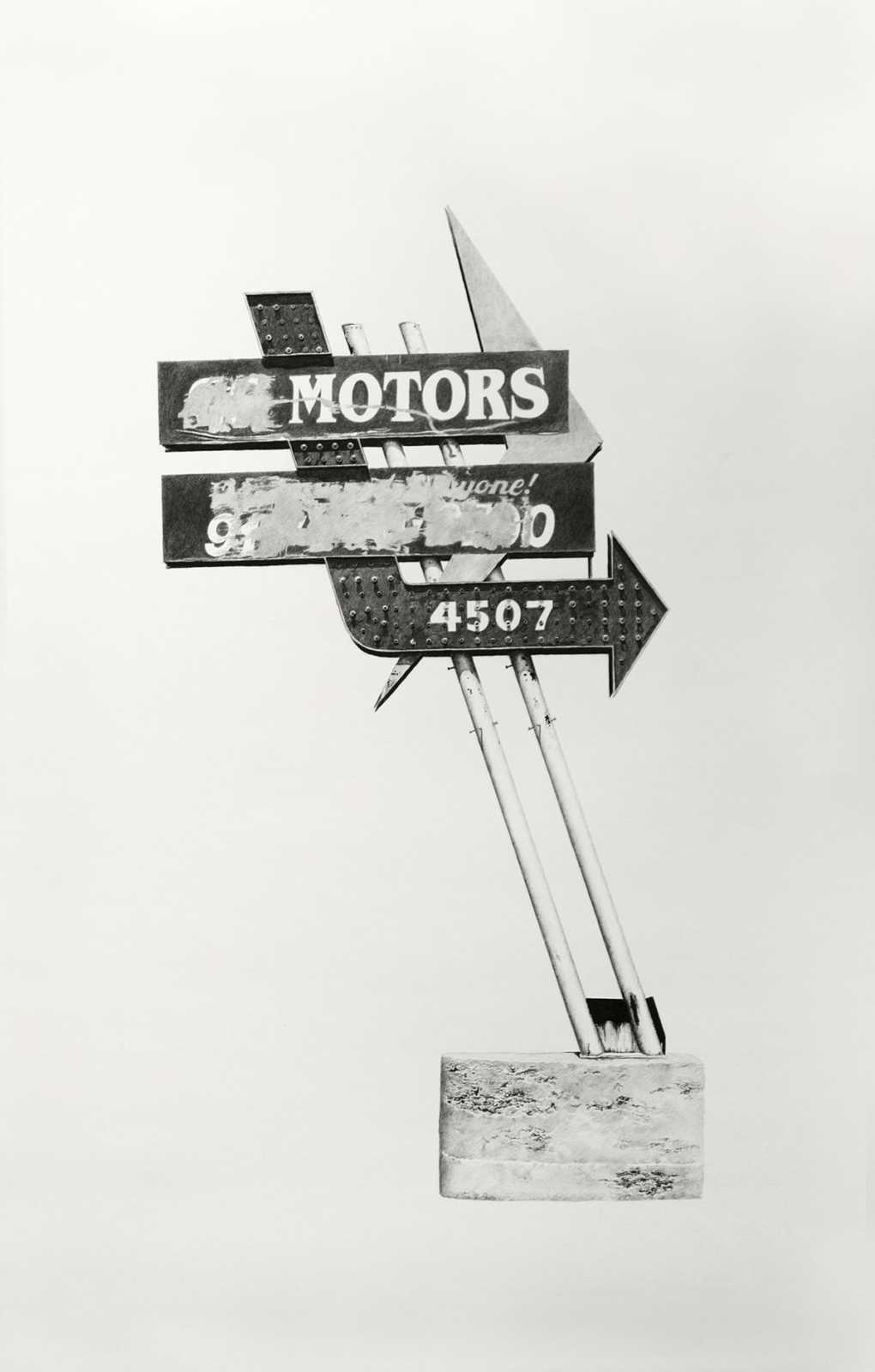 Phillips’s use of the weathered road signs as visual equivalencies for polemical issues allows for an unburdened re-examination of these historical narratives. The topographic denigration of these weathered advertisements signals a looking back to original identities, layered histories, and the physical masking of a space’s original ownership.

A particularly poignant documentation of the economic challenges faced by Tulsa, these monuments loom in Phillips’s work not as beaming tokens of small-town nostalgia, but as silent markers of what has come to be.

“It’s funny, the way in which we hold these things up—this history of westward movement, the pioneer, and westward expansion in the United States—you know, cowboys and Indians—it’s all very much glamorized. If you ask most people who voted for Trump in the election what their idea of making America great again was, what period they would look at, it’s a Norman Rockwell painting. It’s neon lights and the ice cream parlor. That history was not the reality. It’s a homogenized ideal of our past that is completely invented.”

The most surprising work in the exhibition is Then Your Plain Will Be Speckled with Cattle (2017). Breaking from the established nomenclature of physically encoded signage, Phillips has animated a series of drawings of the American bison in the semblance of an Eadweard Muybridge photographic sequence. In it, a single buffalo runs perpetually on loop, its bounding steps regaling it infinitely backwards through whiteness. 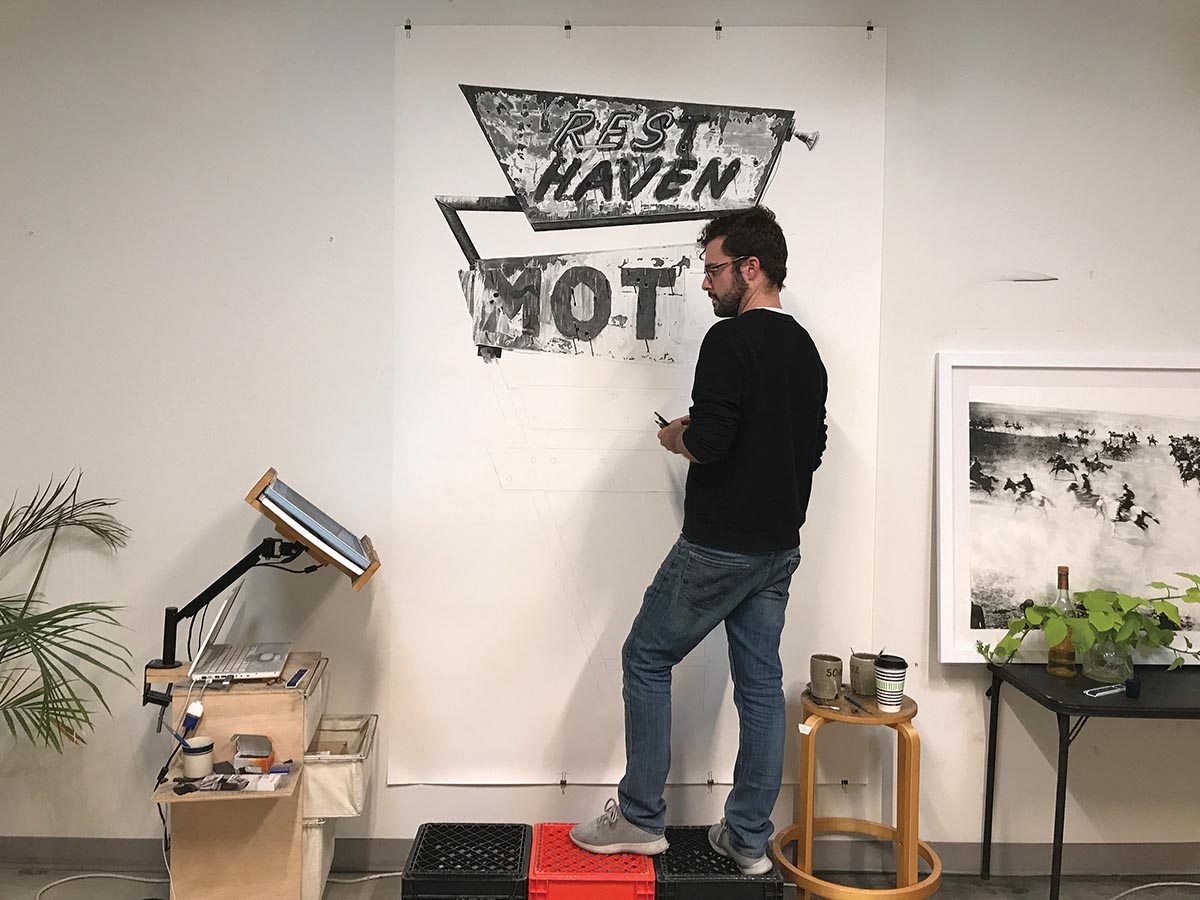 Joel Daniel Phillips in his studio

Welcome to the Orange West is on view at Tinney Contemporary from October 7 through November 11. An opening reception is scheduled for October 7 from 6 until 9 p.m. For more information, please visit www.tinneycontemporary.com. See more of Joel Daniel Phillips’s work at www.joeldanielphillips.com.