I don’t know about you, but if I look at Contemporary Art too much, fatigue sets in.

Identity politics are offered. The status quo is challenged. Expectations: denied. Hybridity and displacement and transgressions abound. Certainly, these are all important themes for artists to pursue, but sometimes Art needs to be a species of the carnivalesque—an appeal to simple wonder. And thankfully, wonderfully, here we go. 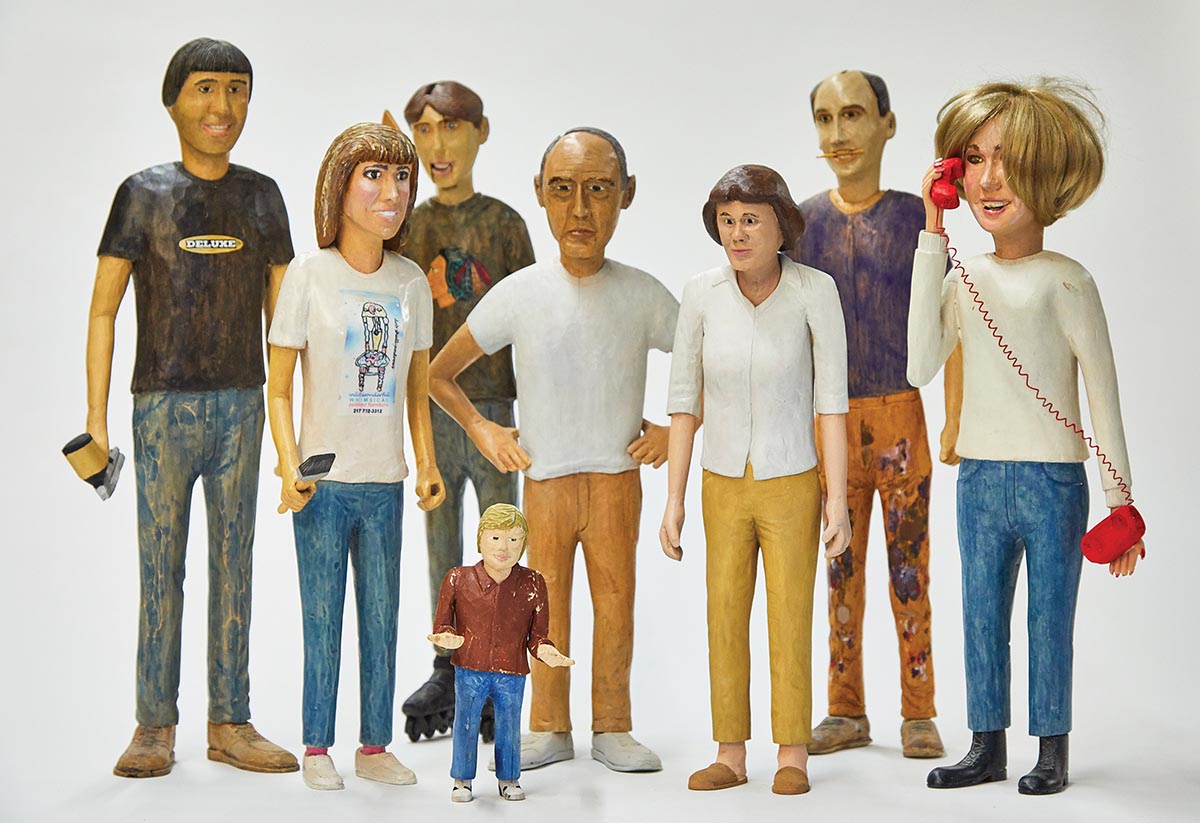 Don Shull is 83 and his first solo exhibition is a retrospective: 25 Years of Woodcarvings & Whirligigs at Elephant Gallery through December 2. It represents a quarter century of carved and painted human figures, many with moving and spinning parts. In the gallery, these art machines are brought to life with the addition of large fans that blow steady streams of air toward attached fans, which in turn power each carving.

I asked Don how he’s feeling about having a show. “A little apprehensive,” he told me, “but excited to see what they do.”

After a decade (1955–65) working at a Caterpillar factory making jigs, dies, molds, and machine tools, Shull taught himself construction. The next forty years were filled with building dozens of buildings, all independently. As he tells it, he would have somebody dig the hole and do the rest himself.

In the early 1990s, between large-scale construction projects, he started making whirligigs. The kinetic wind- powered wooden contraptions are a staple of American Folk Art, and along with pinwheels and weathervanes, whirligigs are an appropriately silly form for vernacular art’s often fanciful figuration. 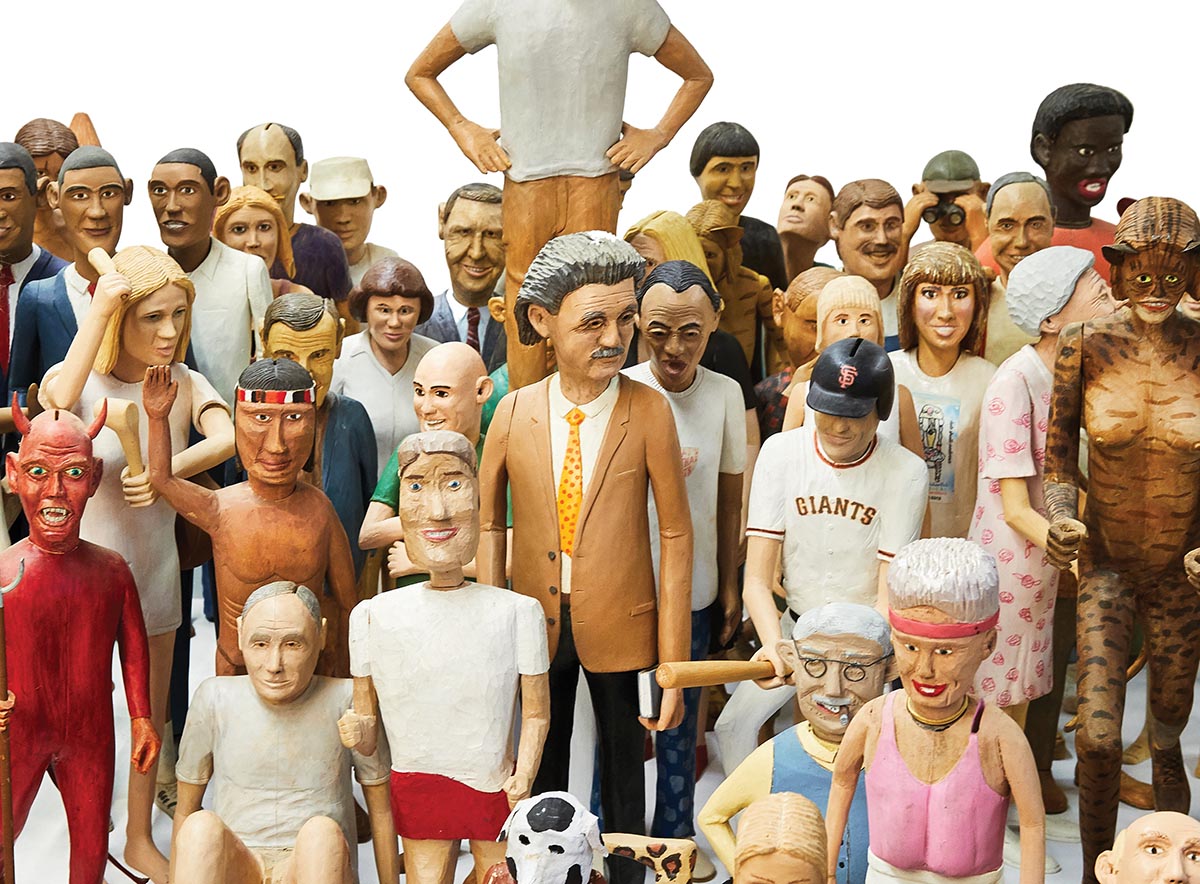 When asked, Shull tries to recall how his work developed. “At some point, somebody gave my son a coin bank in the shape of Abraham Lincoln’s head.” He started making figures that doubled as coin banks, with slots on top of their heads. “I realized I needed to make the necks an inch-plus just to accommodate a quarter. And that dictated some things about the size of the heads and bodies.”

His understated manner of speaking belies the magic of his imagination. The life in the gallery is bountiful. The fans power dozens of dynamic sculptures which whir, grind, and tap in teeming simultaneity. A herd of runners run, carpenters saw and hammer, horses gallop, a man does manic pushups, a centipede’s legs clickity-clack. A large congregation of carved figures (which double as coin banks) with affable smiles and friendly gestures gather nearby: an ordinary guy in a cap; a devil with a pitchfork and a gentle stride; a woman talking on the phone; a reclining leopard girl. 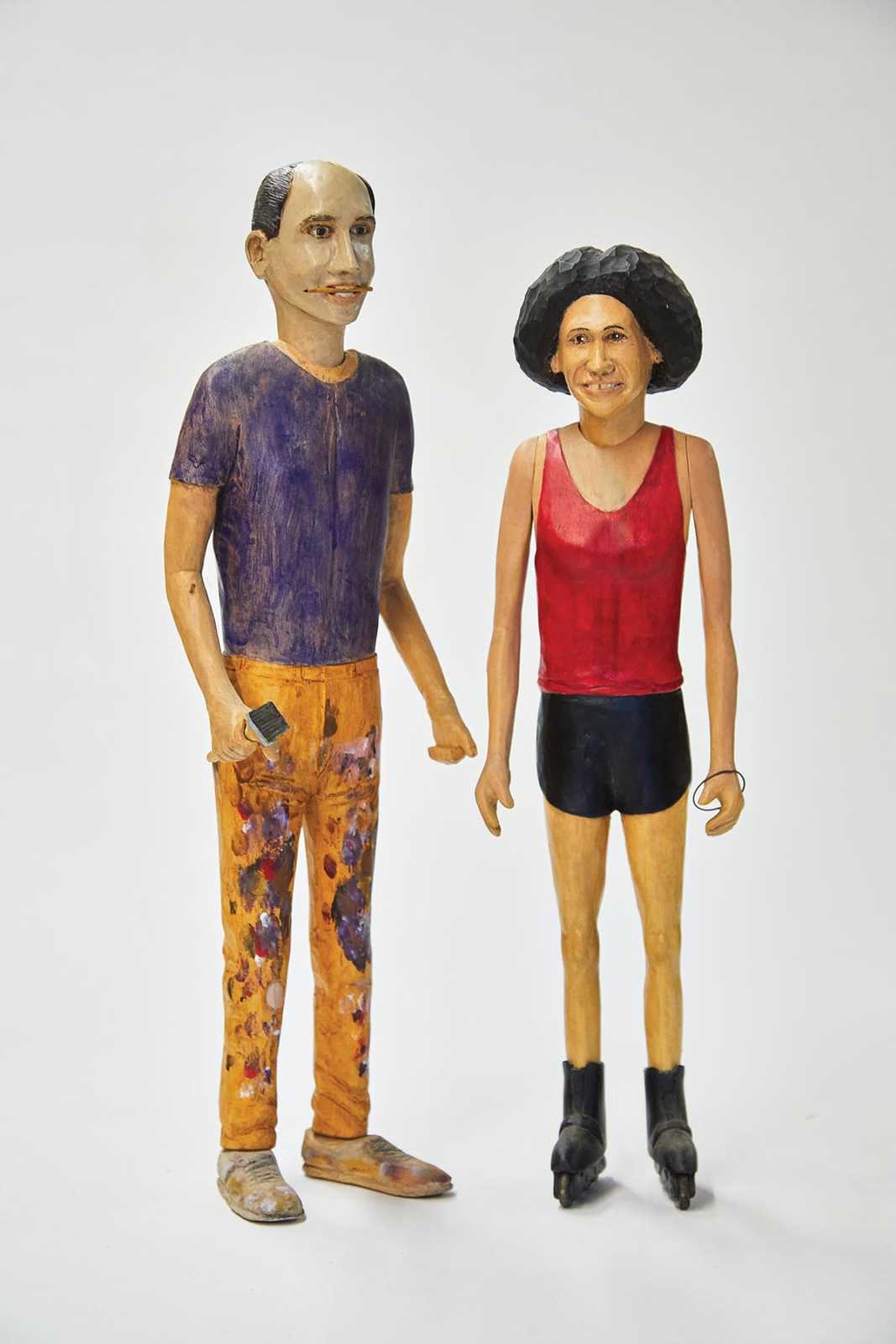 The Painter and the Skater 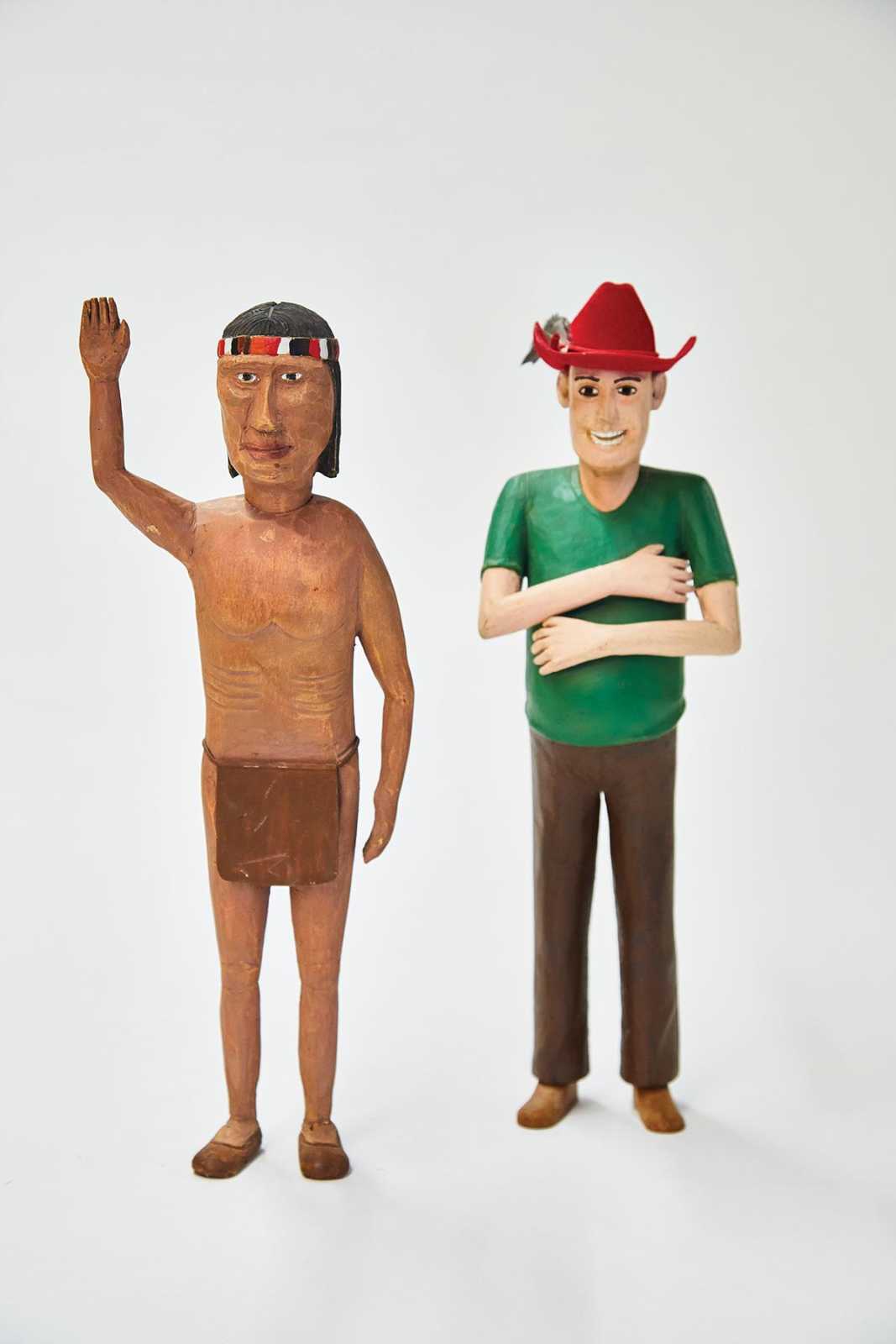 Shull’s vision serenely meanders in and out of the everyday. A man in a turquoise shirt and blue pants rides a unicycle-pedaling tiger, rendered as normally as a papa carrying his son. Both have contented smiles.

I wondered—does he know what he’s going to do before he starts? “No, I just wing it. Don’t do sketches or anything.”

Most of his figures are improvised from his materials as he follows his whim and curiosity, without a whiff of the self-regard that comes with being an “artist.” Seriousness and self-doubt are frequent companions for artists, and self-awareness, like an infestation, once set in is not easily abated. Many artists project innocence, but their attempts are spurious, too restless, or cynical. Shull’s figures appear free of those burdens, in the otherworldly tradition of puppetry. The figures and features are not crude or refined. They get the point across. All those years of building with function in mind is detectable in his work—all the parts that need to spin, spin; all the necks are big enough for coins to go through. The rest is play. 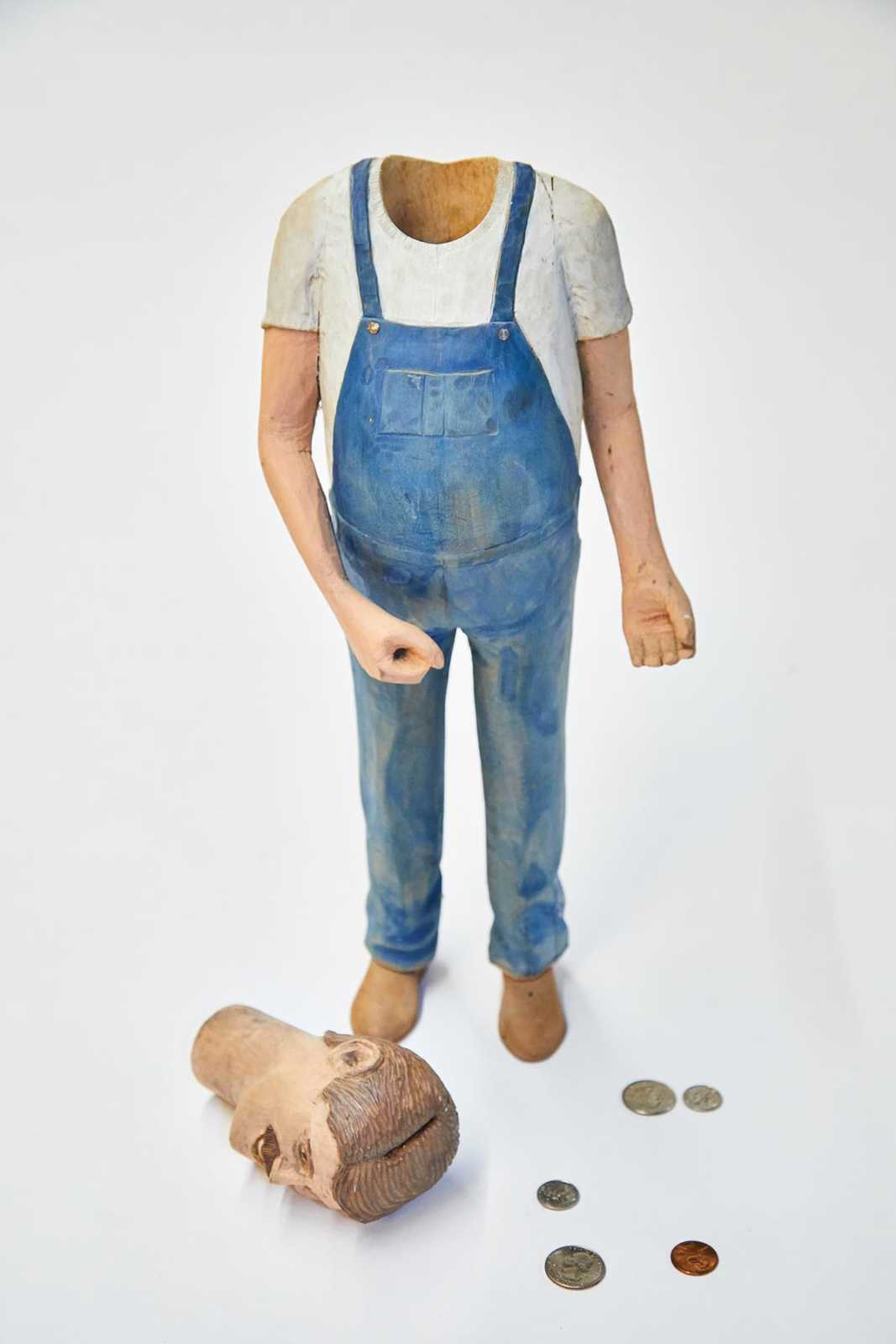 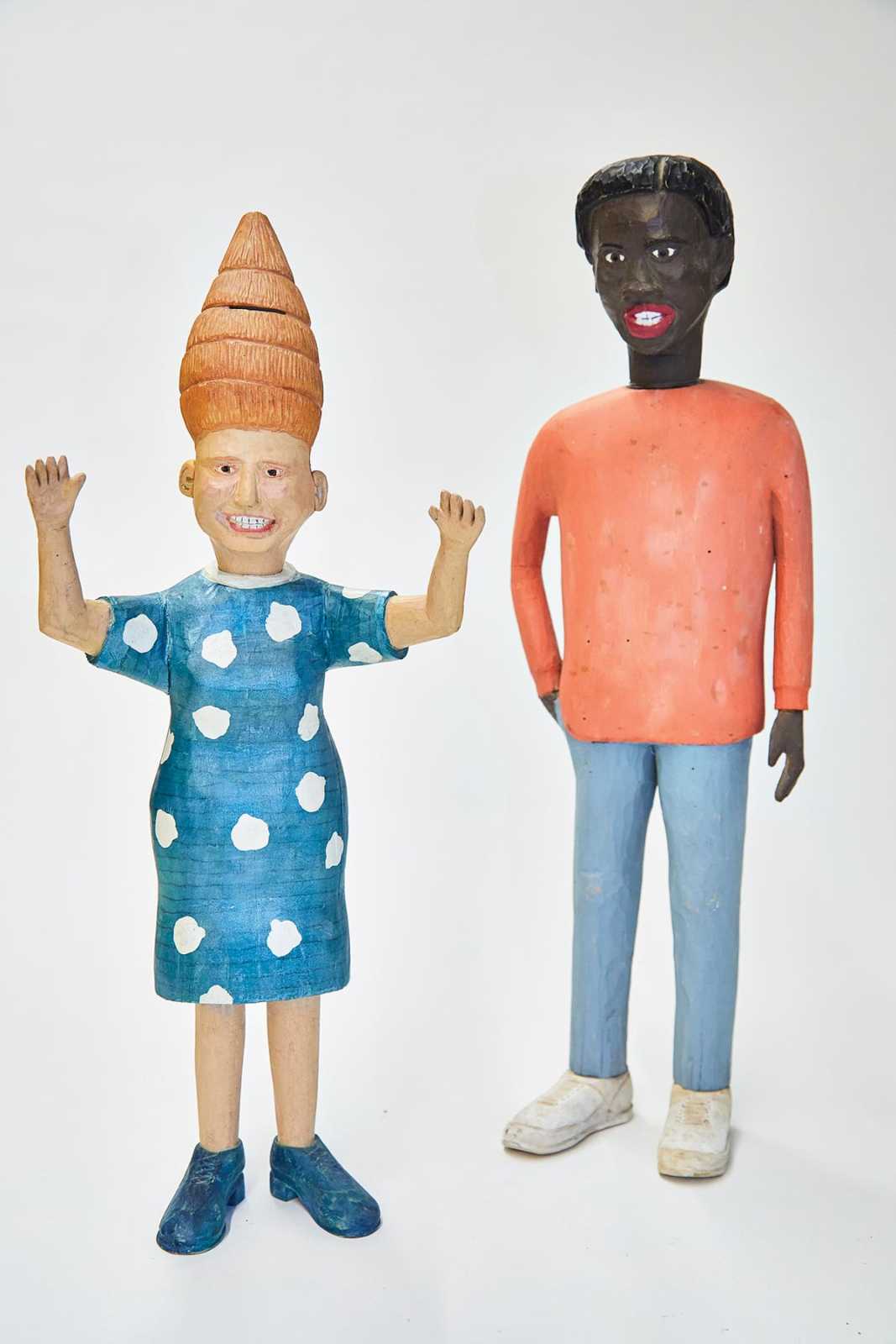 The figures’ postures are brought to life with a calmness that comes with experience. Shull isn’t burdened by his context in the art realm. He doesn’t need or want acclaim, which makes me curious. Why have a show at all? “I guess everybody wants people to see what they’ve made.” 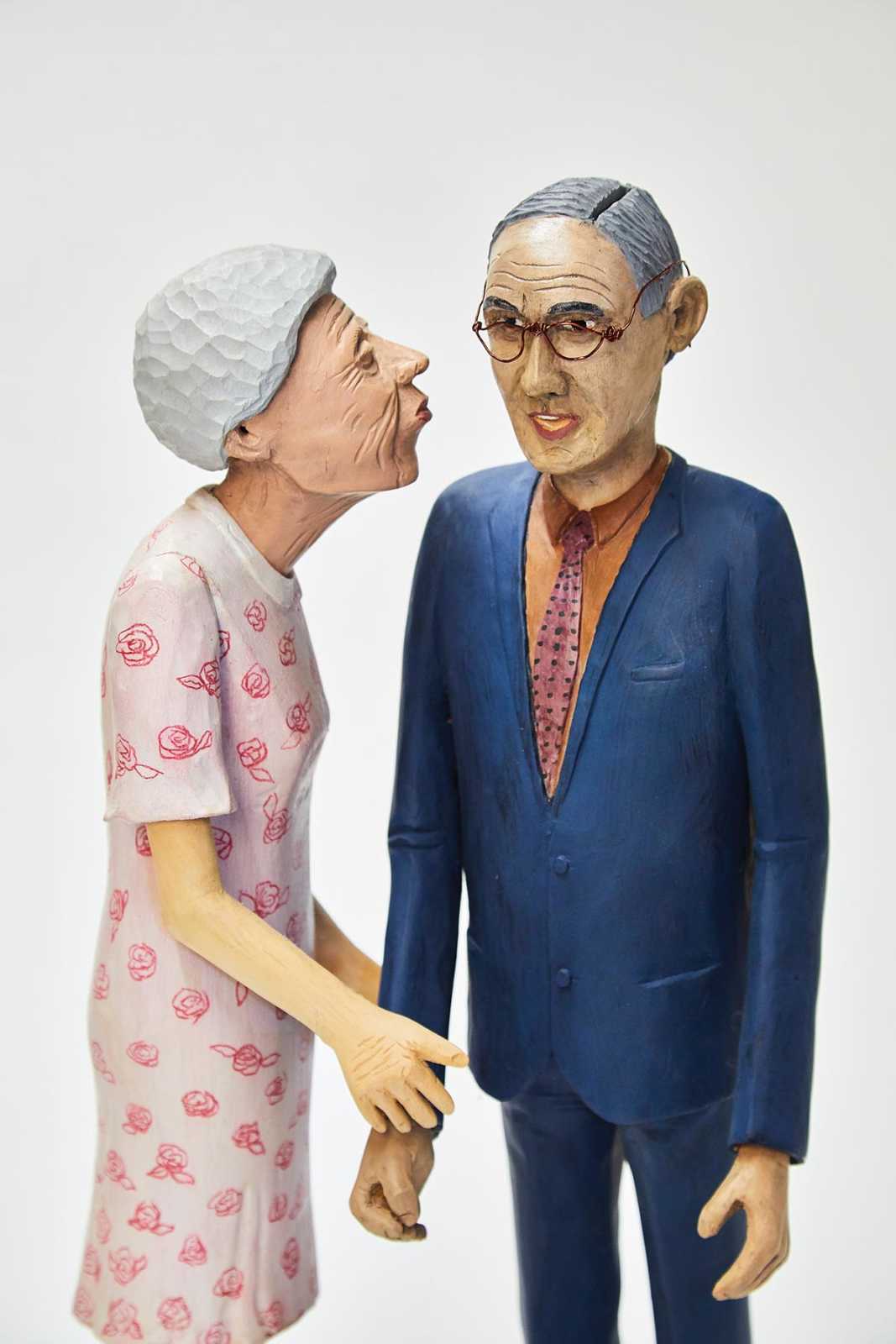 Shull’s grandson, Brett Douglas Hunter (a wildly inventive sculptor in his own right), was influenced by his grandfather’s shop. “I was about 10 when he started carving and experimenting with whirligigs. He would let me tinker around with him in his shop and use power tools, even though Grandma told him not to. As a young boy, things are rarely calm and quiet, but his shop was so relaxing, something I try to recreate as an adult in my studio. It has been very inspiring for my own artwork.” (In fact, my own four-year-old, on seeing Shull’s show, proclaimed, “I love art.”)

Elephant Gallery is teaming up with Third Man Books to produce a monograph of Shull’s mechanical sculptures. I asked him if, apart from that, he has an idea of what he’ll make next. He replied with a question: “Have you seen my praying mantis on a bike?” I have; it’s an anthropomorphic insect riding an actual bicycle. “Well, I’ve got another bike. I hope there are many more things this old man can make.” 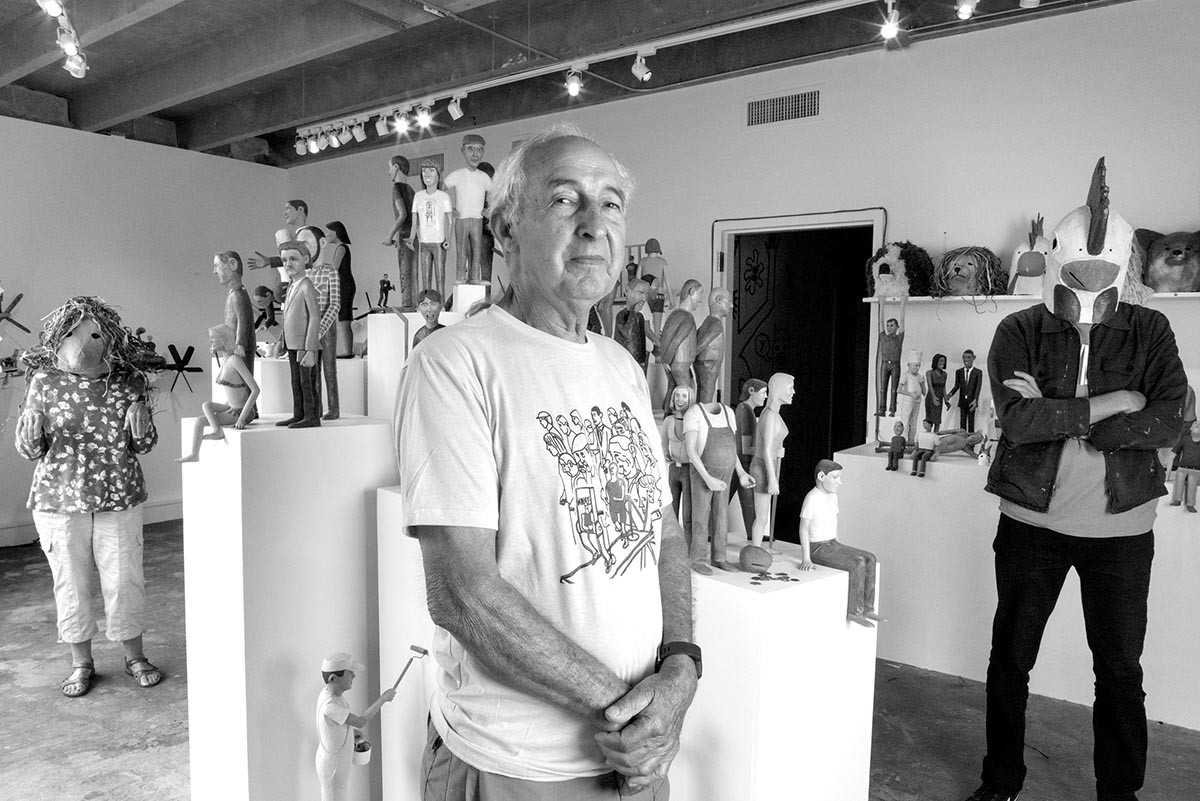